Enter your address to start comparing Plusnet deals available to you:

Save with online exclusives. Find a range of packages from Uswitch's Provider of the Year.

Connect your home. Get a free wireless router included.

Support if you need it. Award-winning, UK-based customer service. 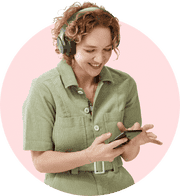 Plusnet started up in 1997 as a dial-up internet provider, and it proved to be so popular that by 2004, the size of its customer base had doubled. Since then, it's grown steadily to become one of the UK’s largest Wi-Fi providers.

In 2007, Plusnet was acquired by BT Group. It continues to operate separately from the BT brand, but the takeover led to a number of offers, initiatives and add-ons being shared between the two broadband providers.

In 2012, Plusnet launched its fibre broadband service, using the same Openreach network as BT's superfast fibre and offering average speeds of up to 66Mbps. Its packages all offer unlimited downloads, but traffic prioritisation usually applies during peak usage times.

Plusnet broadband deals are mainly known for being great value for money, with fast connection speeds and excellent customer service.

If you're looking for a well-priced internet contract, Plusnet's broadband deals will likely feature towards the top of your shortlist.

A simple ADSL broadband connection offers you 10Mbps average download speeds, and you can often grab a Plusnet ADSL deal for as little as £18.99 a month.

If you live in a one or two person household and only very occasionally use the internet, the 10Mbps speeds of Plusnet's ADSL connection would be best for you. Search for more cheap broadband offers on our dedicated page.

However, if you regularly use the internet to stream TV, play games and download large files, or you live with three or more people, then you would likely be better off with one of Plusnet's fibre broadband deals.

Plusnet doesn't limit itself to ADSL broadband. It offers plenty of reasonably priced fibre broadband deals, with faster average speeds starting at 36Mbps and going up to 66Mbps. These can start from as little as £22.99 a month.

Check out the most popular Plusnet internet deals in the comparison table above, or find more fibre broadband deals from other broadband providers.

If you're looking for the best broadband and phone provider for your needs, Plusnet could have what you're after. Many of its value-for-money broadband deals include a home phone plan and line rental for no additional cost.

You'll be able to see this yourself by clicking on the 'Price details' button on each of our Plusnet offers - all charges come from the broadband connection and none come from the home phone service.

Plusnet takes pride in its award-winning customer service and offers a number of ways for customers to get in touch with its dedicated team. It typically receives fewer customer complaints than most Wi-Fi providers in Ofcom's quarterly complaints report.

Plusnet’s online help and support section is intended to cover the most frequently asked questions, while its ‘Contact Us’ facility is available for live online chat or by phone.

Plusnet’s four-port wireless router uses ‘N’ series technology and is provided with all of its fibre and ADSL broadband products.

It comes free when customers sign up for one of its deals on a 12- or 18-month contract.

Created by McAfee, the Plusnet Protect security package also includes spam protection and a personal firewall to better shield you from unwarranted viruses and content.

At the start of 2021, Plusnet announced that they would "no longer be taking orders" for its pay-TV services. The Plusnet T&Cs also reveals that customers would no longer be able to renew their TV subscription as of 7 February 2021.

Existing TV customers are still able to use their set-top boxes to watch Freeview content, but Plusnet TV services are no longer available to purchase.

However, as Plusnet's parent company is BT, customers can still get access to the BT Sport app at a reduced rate.

Customers of Plusnet Broadband receive a personal webmail account, which includes unlimited alias addresses included. These are different addresses that still deliver emails to the same inbox. This gives you the option to give out different email addresses or more anonymous email address and still manage all your correspondances from the same inbox.

Just remember that you'll likely have to change your Plusnet email address if you end up switching from them in the future.