The top 10 countries with the fastest best-selling cars

Which countries are most likely to place importance on top speed when buying a new car, instead of other specifications like reliability or aesthetic? Uswitch found out in their latest study.
Share this guide

A powerful engine is what drives many people to choose a certain car, with the top speed an important consideration. But which country’s residents opt for the speediest car when buying a new vehicle?

To find out which countries have the biggest need for speed, Uswitch looked into the locations with the fastest best-selling cars. To do this, we found the most popular cars in each country from 2019 and 2020, before finding the average top speed of the two and ranking them according to this value.

The countries with the biggest need for speed 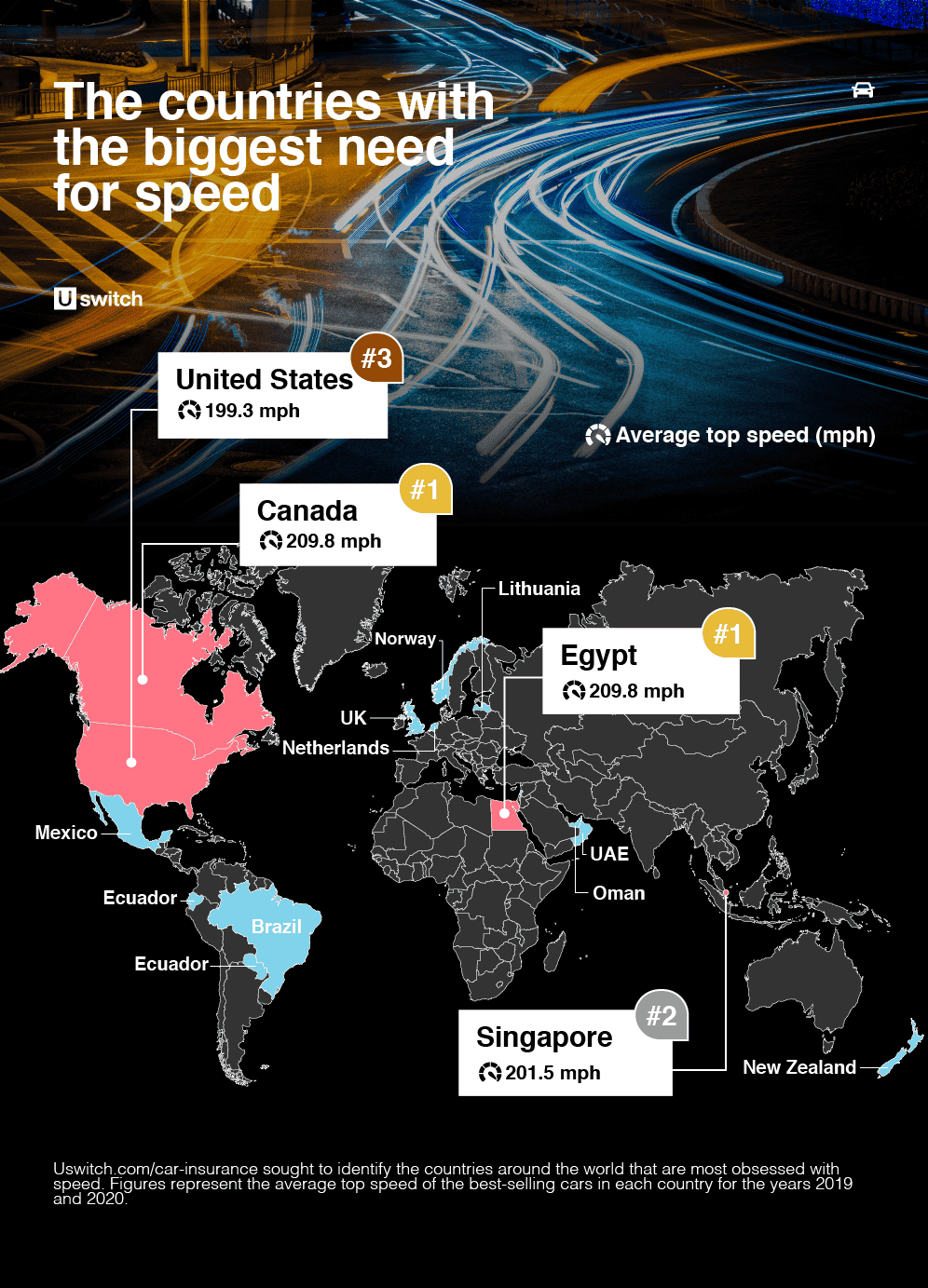 Countries with the biggest need for speed map

Canada and Egypt are the two countries with the greatest need for speed. Although the best-selling cars are different – Canadians favour the Ford F-Series whilst Egyptians like the Chevrolet T-Series – the average top speed is the same. This means owners can cruise at an impressive 209.8mph (miles per hour) and place these countries in joint first place.

In second place is Singapore. The Honda Vezel and HR-V are popular with people living here, possibly as both models have the same engine with slightly different setups. This means they both have a maximum speed of 201.5 mph. These cars are able to get from 0 to 62mph in under four seconds too!

Having surpassed 53 million sales in both used and new cars, it’s safe to say that the United States is full of people who love cars. In particular, they’re fans of the Ford F-150. This truck, which can come with 4x4 capability, can hit 199.3mph. Not bad for such a big car! Countries with the biggest need for speed table

Brazil, Ecuador and Paraguay are all in joint fifth place with popular cars that have an average speed of 187.4mph. While Brazil and Paraguay have the same best selling cars in 2019 and 2020 (Chevrolet Onix), Ecuadorians prefer the Chevrolet Spark. Although the Netherlands has the same popular model in 2019 as Norway (Tesla Model 3), Volkswagen ID.3 sales overtook it in 2020. As the Volkswagen can only go a maximum of 155.3mph, the average top speed of best selling cars in this country sits at 172.6mph. Another joint place is seventh, with New Zealand and the United Kingdom. Residents of these countries favour a Ford. Kiwis like the Ranger model, while Brits go for Fiestas. These two models have the same top speed though, a more than acceptable 168.3mph.
Learn how to get car insurance for you Ford Fiesta.

Lithuania and Mexico take eighth and ninth place in countries with the biggest need for speed. The Fiat 500 has been the most popular car in 2019 and 2020 in Lithuania – with the model able to go a maximum of 158.9mph. The Nissan Versa is the most sought-after car in Mexico, with its top speed of 158.4mph. Completing the top 10 are the middle-eastern countries of Lebanon, Oman and the United Arab Emirates (UAE). All countries had the same best-selling car in 2019, the Toyota Land Cruiser. While residents of Lebanon and the UAE opted for a Nissan Patrol, many from Oman went for a Nissan Sunny. The average top speed of all of these cars is 157.9mph.