It's scrimp oop north! Official: Northerners are almost twice as savvy as Londoners

Northern households are the savviest at saving money by switching their energy providers while Londoners are the worst[1] — as a huge north/south divide is revealed by 20 years of data from Uswitch.com, the comparison and switching service.

Seven of the top ten towns and cities for switching are in the north — with five of the top ten in Yorkshire — while bottom of the table is capital city London[2]. 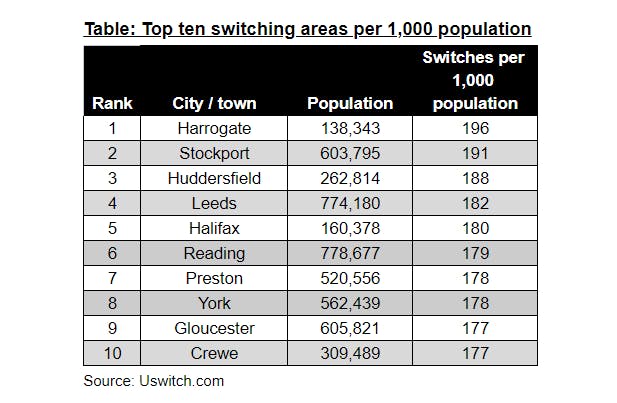 Five of the locations in the bottom ten are in Wales, including capital Cardiff, Swansea, Newport, Llandudno and Llandrindod Wells[3]. 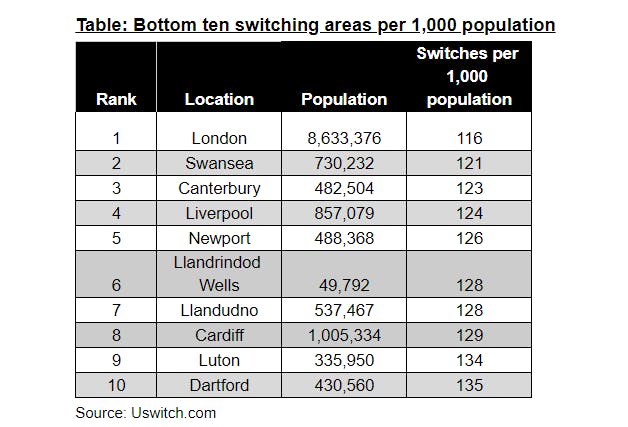 Across London, just 116 switches were made per 1,000 people[3]. The capital is believed to have a lower rate of switching due to the higher proportion of Londoners who rent, rather than own, their home.

Uswitch.com revealed the savviest cities as it celebrates 20 years of helping energy customers switch to better deals, saving them £2.5 billion in total.

Will Owen, energy expert at Uswitch.com, comments: “Northerners are showing southerners how it’s done when it comes to switching, with Harrogate residents switching at twice the rate of those in central London.

“Yorkshire residents are earning their reputation for being frugal, with five locations in the top ten being from God’s Own Country.

“Wherever you live, it’s always worth doing a comparison online and seeing what energy deals you could be getting.

“It’s incredible to think that we’ve saved consumers £2.5 billion by helping them switch energy providers over the last 20 years, and we look forward to helping save the next £2.5 billion.”

Uswitch is the UK’s top comparison website for home services switching. We’ve saved consumers £2.5 billion off their energy bills since we launched in September 2000, and also help people find a better deal on their broadband, mobile, TV and financial services products.

Uswitch is part of RVU, a UK business that also owns Money.co.uk, Bankrate and Save on Energy.