Last year, Huawei was only really known to tech fans. If you’d asked the man on the Clapham omnibus what the company was known for, you’d have got blank looks. Not any more.

Since then, Huawei’s P20 and P20 Pro bucked the odds to become some of the best-selling phones of 2018 on Uswitch. And now, we’ve got new flagship Huawei phones in the form of the Mate 20 and Mate 20 Pro.

Like the P20, they’re home to cameras that wouldn’t be out of place on a pricey SLR digital camera and that harness artificial intelligence technology to help you get great snaps.

But that’s really where the similarity with previous Huawei smartphones ends, with the Mate 20 range adding a slew of genuinely innovative features that are a breath of fresh air.

Not least among them is the option to wirelessly transfer battery charge from your phone to those of friends. If you’re in a sharing, caring mood, that is.

In an industry first, the Mate 20 Pro also showcases a radical new design with a fingerprint scanner embedded within the screen itself. And the cameras have been improved and apply incredible video effects in real-time, too.

Sound good? Read on and we’ll walk you through everything you need to know.

1 Power to you. And your chums 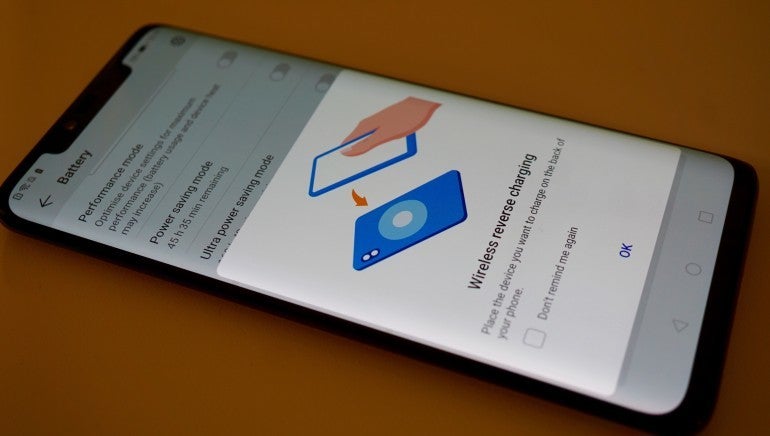 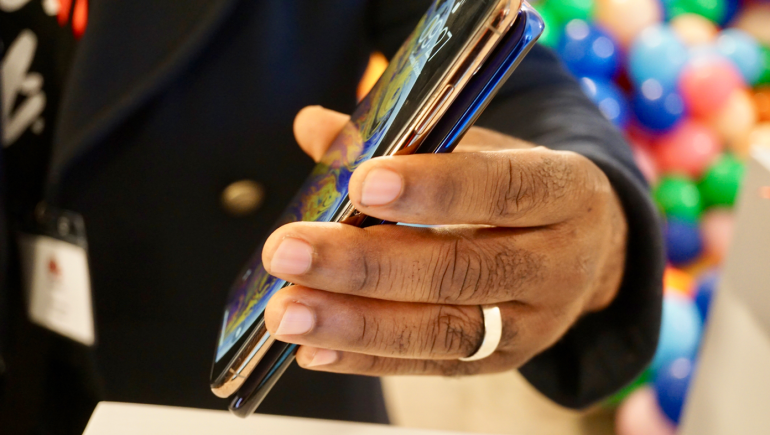 That’ll take hours to charge, no? Not so. That's because the Mate 20 Pro is equipped with 40 watt Supercharge fast charging.

According to Huawei, that means you can go from zero to 70% charge in half an hour. The standard Mate 20 is no slouch either and can get you from zero to 58% in the same timeframe.

The Pro also offers wireless charging. But not as you know it. Huawei has implemented a much faster 15-watt wireless charging technology, which is almost double the speed of power transfer than most comparable phones. And means Huawei’s new handset should charge twice as quickly.

But the most impressive thing for us is that the Mate 20 Pro actually allows you to share your charge with chums whose battery is running out. So it becomes, in effect, a wireless charging pad.

To share the love, you just place the P20 Pro’s back against the back of your friend’s wireless charging-capable phone or tablet. And the power transfer starts instantly.

Winningly, the technology is compatible with a slew of rival phones, including iPhones and high-end Samsung Galaxy handsets.

Triple cameras with technology from lens-maker Leica are a hallmark of Huawei phones. And the Mate 20 range is no different. Like their forbears, both phones house a standard wide-angle lens and a telephoto lens that lets you get closer to an object that’s far away.

The difference is time around is that the monochrome lens has been replaced by an ultra-wide angle lens designed to “give you breadth”. The wide-angle lets you get a lot more in the shot for more impactful, and altogether more ‘epic’ photos.

The ultra-wide angle lens also lets you get in closer to your subject without losing detail. Ordinarily, if you get any closer than 8cm-9cm away from an object you’ll lose clarity.

But Huawei claims you’ll now be able to get 2cm away from an object and still shoot in crisp detail.

Huawei has enhanced the breadth and scope of AI camera modes too, something that’s been enabled by the gym-honed, extra-beefy Kirin 980 AI chipset that powers both phones and sits at their heart.

Previously, Huawei phones could recognise about 500 scenes and scenarios. But the Mate 20 and Mate 20 Pro can recognise around 1,500.

That means it’s able to discern what you’re shooting and make automatic adjustments and recommendations to help you get a really good snap.

3 AI has come to video recording too 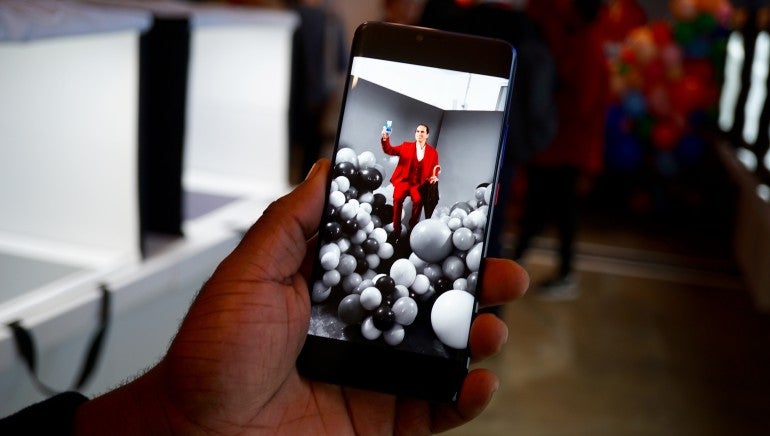 Huawei’s marketing mavens claim its new phones video recording capabilities will ‘allow you to be your own director”.

The basis for that claim is the brand new AI Cinema Mode. This allows you to apply a range of nifty cinematic effects in real time. So what you’re recording on your screen at that moment is exactly how the video recording will look.

Perhaps our favourite effect is AI Portrait Colour. This enables you to record footage where most of the scene is in monochrome, except for certain subjects or objects that appear in vivid colour. Think Sin City, or the girl in the red cape from Schinder’s List.

It’s very striking. And given that normally you’d have to slave away in post-production for a long time to get a comparable effect, very impressive too. 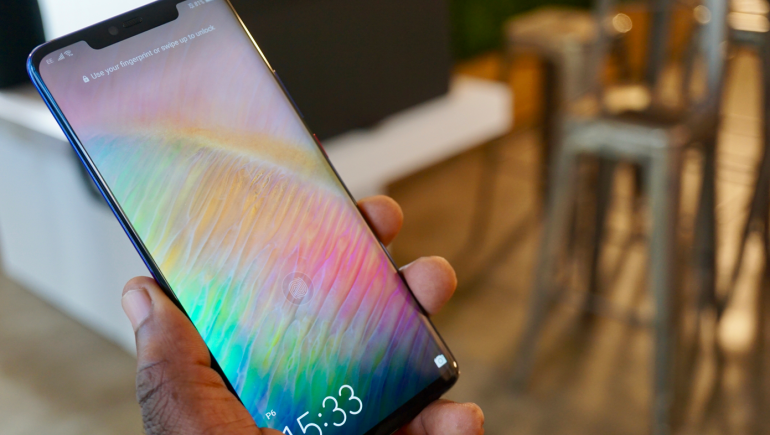 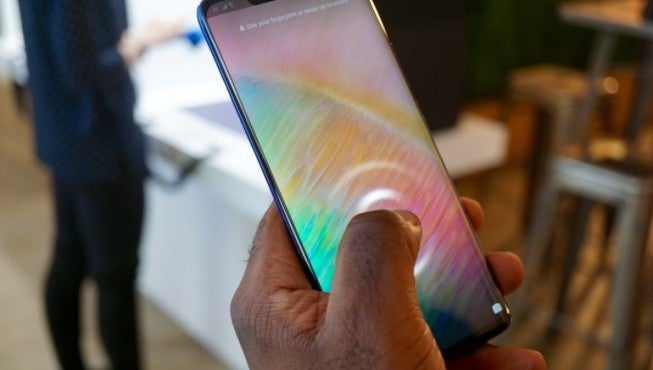 Huawei Mate 20 fingerprint scanner in use

If you follow technology, you’ll know that manufacturers, including big-hitters such as Samsung, have been wrestling with the challenge of embedding a fingerprint scanner in a phone display for a long time now.

Huawei’s Mate 20 Pro is the first mass-market handsets to pull it off.

It also means that the Mate 20 Pro's fingerprint scanner is much more accessible and easier to reach than fingerprint sensors that are located at the rear of a phone. Where I’ve found I’m just as likely to blindly, accidentally run my fingers over the camera module instead of the fingerprint scanner. And end up with a smudged lens.

We tried out at the scanner at a press briefing and can confirm it was very responsive and worked very fast. Strike one up for Huawei, then. 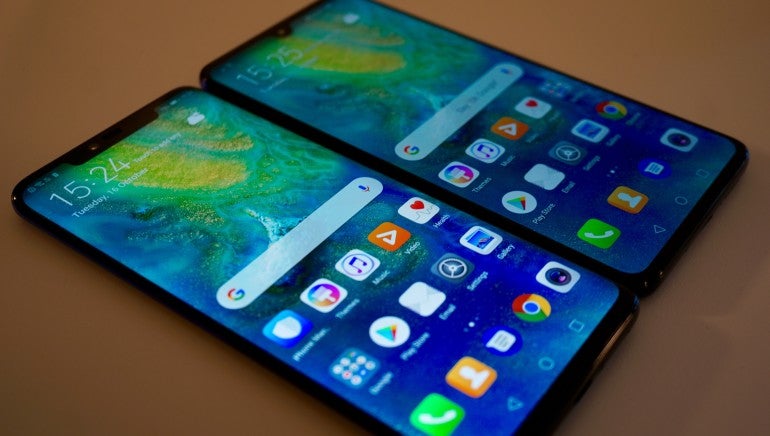 The Mate 20 Pro is home to a huge, crisp 6.53-inch screen, that easily goes toe to toe with the best around. The standard Mate 20 is no tiddler either and makes room for a similarly rich 6.39-inch display.

If you’ve ever owned a shiny-backed phone you’ll know that while they look pretty, they’re fingerprint magnets. And tend to look very smudged indeed after a day’s use.

To counter that, the Midnight Blue and Emeraled green editions have a textured back that means that fingerprints don’t gather and make the phone look unsightly. But still feels smooth to the touch.

6 Up for pre-order now 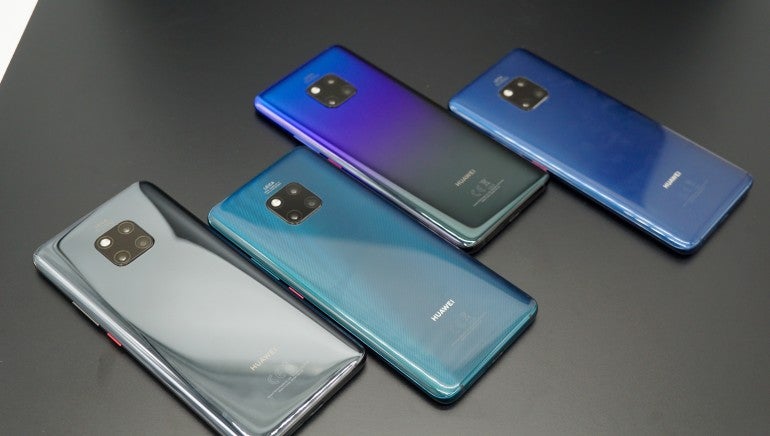 EE is the first of the networks to break cover and is accepting pre-orders for the Mate 20 Pro right now. Contract start from £44 per month.

If you'd like to buy the Pro off-contract, you're looking at £899. And if you buy from Carphone Warehouse, they'll throw in a free wireless charger and Huawei GT smartwatch.

Sky is also offering the same freebies with Mate 20 Pro pre-orders. If you're an existing Sky TV customer, prices start from £40 per month on a Sky Mobile Swap24 plan with 1GB of data and unlimited calls and texts. Not got Sky TV? You can get the same deal for £50 per month.

We'll add availability and pricing details for the standard P20 when we have them.