A major security breach of Apple’s iPhone has seen the tech giant immediately issue a new update to its software and advise users to install it as soon as possible.

This latest outbreak of panic has shown just how easy it is becoming for hackers to access personal information from the world’s most popular smartphone.

So, what’s the issue? And how can you stay safe? Read on and we’ll make sure you’re clued in.

The security breach was discovered by Ahmed Mansoor, a dissident from the United Arab Emirates.

Having received a text message with an unrecognised link in it, Mansoor contacted academics at the University of Toronto’s Citizen Lab.

They found that the link caused iPhones to be loaded up with powerful spyware which could breach personal information.

What can the spyware see?

Every piece of personal information is at risk.

That means texts sent using the Messages app, emails sent via Gmail, notifications and missives in Facebook and Facebook Messenger and also appointments in Calendar are all susceptible to attack.

Who’s behind the attack?

This is where things take a strange turn. It turns out the link comes from an Israeli ‘cyber war’ company called NSO Group, which sells the spyware off the shelf, calling it Pegasus.

While NSO did not confirm it was the source of the spyware, it did say it was engaged in helping governments ‘combat terror and crime’.

It’s been suggested by researches that the UAE government bought the spyware in order to carry out the attack on Mansoor. The UAE has not responded to requests for comment.

How serious is it?

Very. The fact that Apple issued a patch for the problem just weeks after academics found it shows that Tim Cook and co are not taking any risks.

The issue raises questions about how easy spyware has become for companies to access and attempt to install on a platform which has always had a solid reputation when it comes to security.

How can I stay safe? 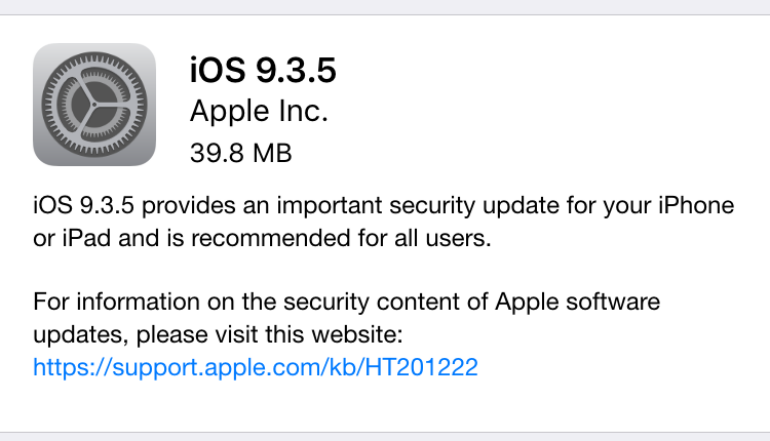 If you have an iPhone or iPad, you should download and install iOS 9.3.5 now. It can be found in the Settings app of your phone and tablet easily and will only take a few minutes to load.

Once done, your device will be secure. More generally, this once again highlights a key tenet of Internet safety.

If you get sent a link from an unrecognised contact, don’t open it and report the text or email it came in to your email provider and mobile maker.

Get fit and stay healthy with this new year tech.