You may be wondering if you really need another streaming service. What does this new one offer that Netflix, Amazon, Disney Plus, NOW TV, Britbox and Apple TV+ don’t? Well, give us a chance to explain why you should give it a shot.

Streaming platform designed for your phone

Quibi was designed and built to be a streaming service that you use on your phone. In fact, up until the very latest updates, its content has only been viewable on your mobile phone.

While many users have raised this as their biggest complaint, preferring to stream the content on other devices or cast it onto larger screens, much of the content is well-suited to showing off just how good your smartphone screen is.

Headline shows like ‘Survive’ starring Sophie Turner include breathtaking panoramic shots of the beautiful Colorado wilderness, and none of that is lost just because you’re viewing it on your smartphone.

If you hate viewing content on your smartphone then Quibi might not be for you. But if you’ve got a new phone with an awesome display like the iPhone 11 or the Samsung Galaxy S20, then this is a perfect opportunity to take full advantage of your phone’s capabilities. 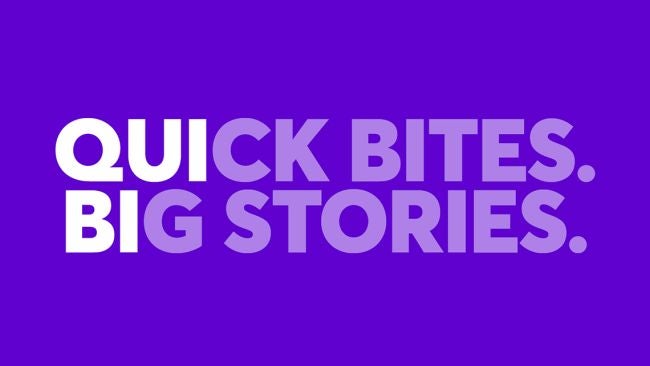 Since it was designed to be viewed on a smartphone, all the episodes on Quibi are a maximum of 10 minutes long. This novel approach to TV may sound gimmicky, not giving you enough time to delve into the storylines or experience any real character growth.

In fact, the short episode length means that the episodes are much more intense and driven, focusing on one or two characters and their journeys rather than spending time fleshing out secondary characters or world-building.

The snack-sized content of these episodes was implemented so that you could download an episode and easily watch it on-the-go. One or two 10-minute episodes would be great to watch start-to-finish on your commute to work, rather than only making it halfway through a 40-minute Netflix episode.

Unfortunately, Quibi’s on-the-go approach launched at the exact time most of the world wasn’t going anywhere. With the majority of us still living in lockdown, the benefits of bite-sized content are slightly lost considering we don’t actually commute at the moment. But as restrictions lift, this streaming platform will definitely come in handy for travel on public transport.

While platforms like Netflix started out as an online service and later introduced a mobile app, Quibi is definitely mobile-first. Its card-based interface is incredibly smooth and easy to use, making the app feel high-quality and sleek.

Quibi also has a feature called Turnstyle, which allows you to seamlessly switch between horizontal and vertical viewing with hardly any lag. Quibi also streams in at 1080p full-screen and avoids any gaps created by notches or any other screen-holes.

Due to the unique viewing nature of the platform, everything on Quibi is original content. What’s surprising is the number of big names attached to the project, featuring the likes of the aforementioned Sophie Turner as well as Anna Kendrick, Liam Hemsworth, Idris Elba, Laurence Fishburne and Nicole Richie to name a few.

Quibi costs £7.99 per month, making it on the same price point as Disney Plus. It also offers a 90-day free trial, giving you plenty of time to properly binge and explore all the shows available.

With so many streaming platforms to choose from it can be hard to see the value when another one launches, especially one you can only watch on your phone. However, if you’re looking for a novel, different way of watching TV then you should definitely give Quibi a try.

I thought it would feel gimmicky and unsatisfying to watch episodes that were so short, but I really enjoyed the format and the performances from the start.

And with a three-month trial, there’s no harm in seeing if this is something you would use, especially if you have to start commuting again.

Programmes from U.S. networks set to make up bulk of new platform.