How much tech does your child have in their backpack?

Back to school season is nearly here again. And, along with pencil cases, PE kits and too-big school uniforms, parents up and down the country are filling their kids’ backpacks with expensive gadgets.

So just how much are parents spending on tech for their kids? Well, the short answer is a lot. £1.4 billion in fact. That’s up an eye-watering £200 million on last year’s spend.

But what are parents actually buying? And are they happy about it? Together with the survey specialists at Opinium, we polled 1,008 parents to find out what they thought.

Read on as we take a closer look inside a typical school bag.

Are we spending too much on tech for kids? 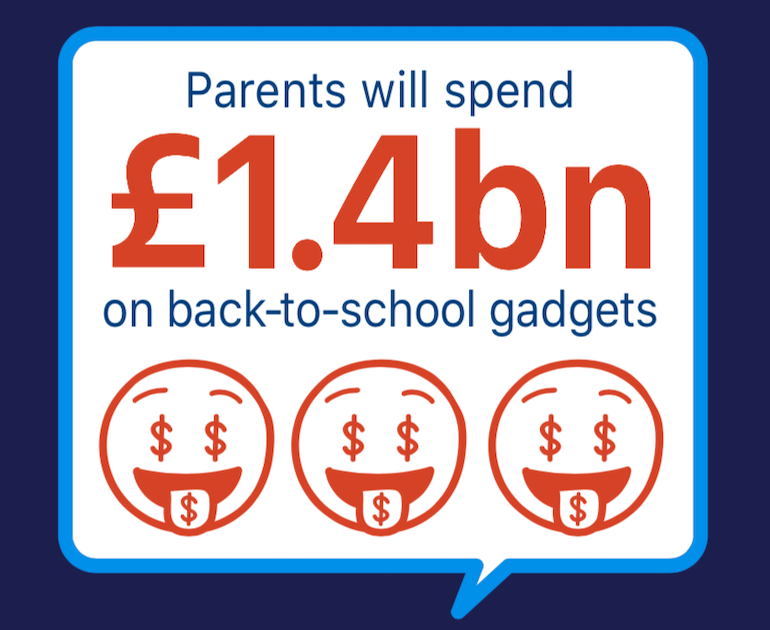 £1.4 billion on gadgets for children certainly sounds like an obscene amount of money. But let’s break it down.

The average parent spends £264 on gadgets for each of their children. And, unsurprisingly, the most popular gadget is a smartphone, with 56% of school kids already in possession of one.

But considering that the latest flagship phones from Apple and Samsung cost £900 or more, £264 doesn’t seem that outlandish.

Still, our survey showed that 4 out of 10 children have better phones than their parents with half owning the very latest smartphones. Which suggests that parents are keen to give their kids the very best tech money can buy. Even if it’s better than anything they’d buy for themselves.

Of course, kids carrying around expensive tech comes with its own risks. 88% of parents worry about gadgets being lost or stolen. This has prompted one fifth of the surveyed parents to drive their kids to school instead of letting them walk or get public transport. 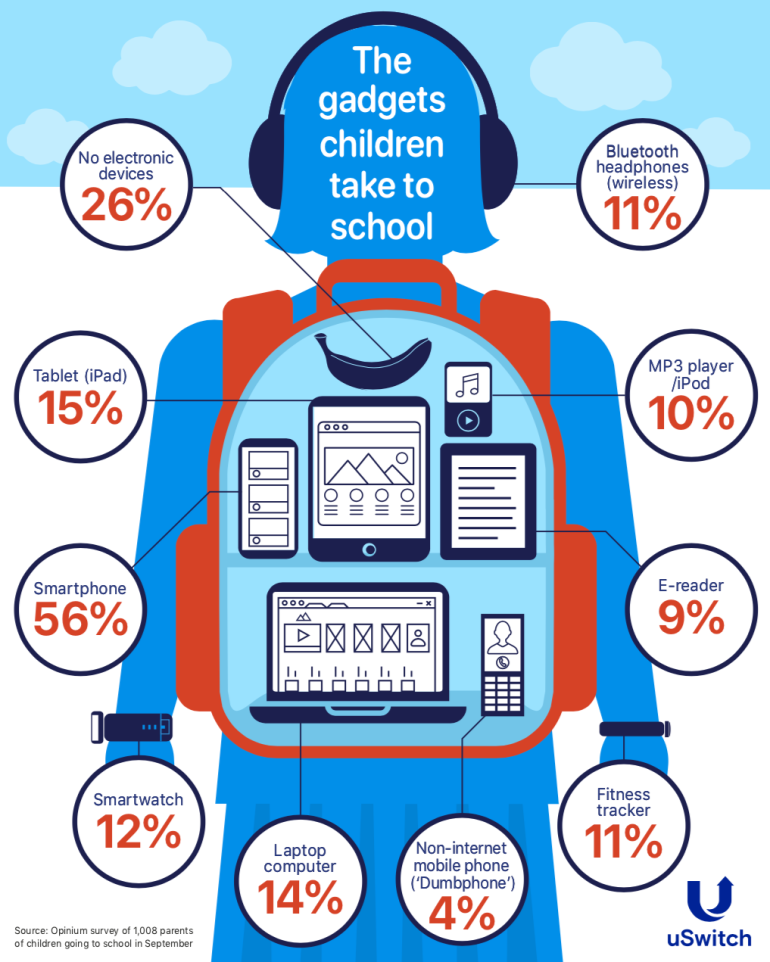 Naturally, this has a knock-on effect on kids and parents alike. For one thing, it robs kids of some of their independence. But even more importantly, walking to and from school is a much-needed form of exercise for a lot of kids.

And of course, it takes a huge chunk out of the day for parents who have to balance work commitments with dropping and collecting their kids.

So, what’s the solution? Should we stop providing kids with expensive gadgets? That’s a popular opinion among many parents and teachers alike. In fact, nearly half of kids go to school every day with no electronic devices at all.

But what impact does this have on their education? Read on as we examine the pros and cons of smartphones in schools.

Should smartphones be allowed in schools? 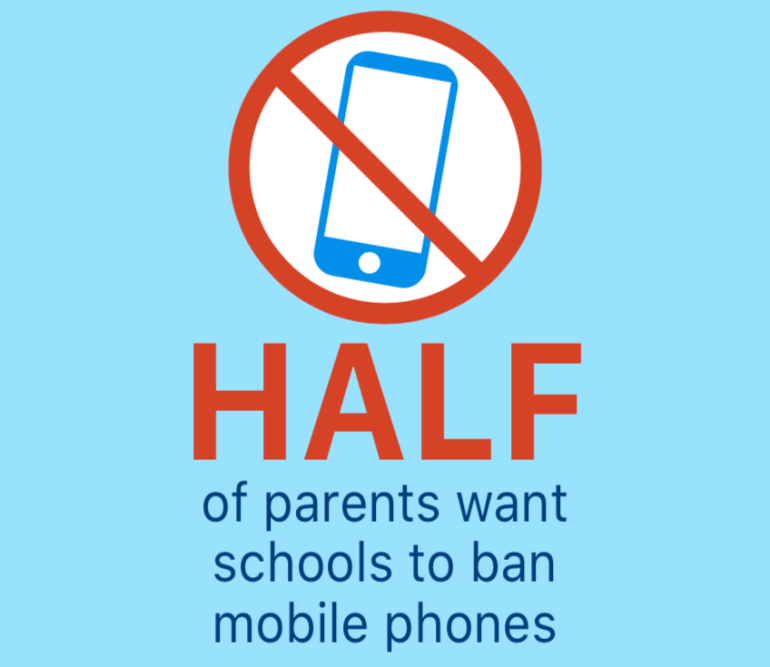 There’s no doubt that having smartphones in schools is fraught with problems, such as social media and cyberbullying. But there are loads of educational benefits too. There are no end of apps designed to help kids in school. And besides, technology is such a massive part of our culture, it’s difficult to prepare them for the world without letting them use all our modern-day tools.

And considering the endless games, apps and messaging forums as well as the risks of cyberbullying and other online predators, it’s not surprising that so many parents want to safeguard their children from the dangers and distractions of owning a smartphone.

But, on the other hand, owning a smartphone can help children become tech savvy from an early age, as well as inspiring creative interests such as photography.

And of course, smartphones can actually be a great way of keeping tabs on your child. Aside from just being able to give them a ring whenever you need to, you can also install tracking apps to check on their whereabouts.

From putting on content restrictions to limiting data allowances, there are plenty of ways to stop kids from using their phones too much, or looking at things they shouldn't be.

Our Uswitch mobile phone expert, Ernest Doku, said “It’s a mark of our always-connected times that half of pupils now have their own smartphone, and the number of gadgets that schoolchildren are carrying into class every day is mind-boggling.

“It is understandable that parents are concerned about the potential distractions facing their children, but banning phones from schools is not as straightforward as it sounds, especially since technology is an integral part of modern life.

“Children are very likely to be using a whole range of gadgets when they enter the world of work, and school is one place where they should be able to learn about technology in a safe environment.

“In addition, many parents want the peace of mind of being able to contact their children in emergencies, and find out where they are if they don’t appear at home at the usual time, whether by calling them or by using an app like Apple’s Find My Phone.

“Striking the right balance is an impossible task for parents and teachers, but with the arrival of 5G, the world is going to become increasingly connected, and schoolchildren need to be able to deal with the tech-filled environment they’re growing up in.”

If you’re worried about kids getting distracted at school, you can always speak to teachers to find out what measures are being taken to ensure children aren’t using their phones too much during the school day.

If you want to find out more, take a look at our complete guide to everything you need to know about kids and smartphones.