OnePlus has officially unveiled a trio of new smartphones, including one packing next–generation 5G technology.

The OnePlus 7 Series includes the OnePlus 7, OnePlus 7 Pro and OnePlus 7 Pro 5G. While the latter is undoubtedly the headline grabber, the Chinese mobile maker has not revealed any specific details about the device, simply saying it’s ‘coming soon’ and reaffirming that it will be an EE exclusive.

That’s not to say the other devices in the range aren’t set to be some of this year’s best smartphones. Far from it.

This is backed up by a beefed up autofocus system and improved Nightscape tech for shooting after dark. 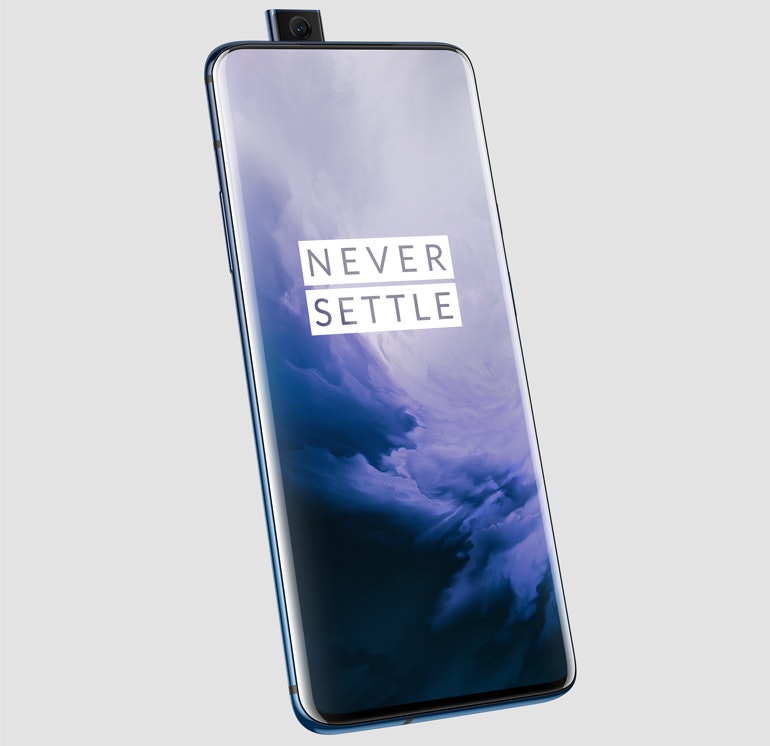 Best of all, OnePlus has opted against a notch design, instead utilising a 16 megapixel pop–up selfie camera which pops up when opening selfie shooting mode. This smart tweak means the stunning 6.67–inch AMOLED screen covers the entire front of the device, with no bezels to speak of.

The OnePlus 7 Pro comes with an improved in–screen fingerprint scanner, which the mobile maker says is faster and more accurate than that found on the OnePlus 6T.

Powered by a Qualcomm Snapdragon 855 processor, the best in the business, there are 6GB, 8GB or 12GB RAM options available, making this one of the most powerful smartphones currently available. You can choose between 128GB or 256GB of storage.

The OnePlus 7 Pro is significantly pricier than last year’s OnePlus 6T. The cheapest 6GB of RAM/128GB model costs £649, rising to £699 for 8GB of RAM/256GB storage and £799 for 12GB RAM/256GB storage. Mirror grey and nebula blue versions are available from 21st May with an almond version of the 8GB/256GB model coming in June.

Fortunately, OnePlus has released a standard OnePlus 7 model which starts at £499 SIM–free. This keeps the same design as the OnePlus 6T but with Qualcomm’s Snapdragon 855, 6GB or 8GB of RAM and a dual lens camera featuring the same main 48 megapixel lens as the Pro edition. The OnePlus 7 will be out in June.

Based on the OnePlus 7 Pro, the OnePlus 7 Pro 5G is set to have a tweaked design in order to accommodate 5G antenna. With Vodafone confirming its 5G network this week, expect OnePlus stockist EE to do the same soon and bring the device to market imminently.