The Doogee S95 Pro is an armour-clad device that is larger and heavier than the average phone.

It is a phone designed to be tossed in a backpack rather than kept in a back pocket. 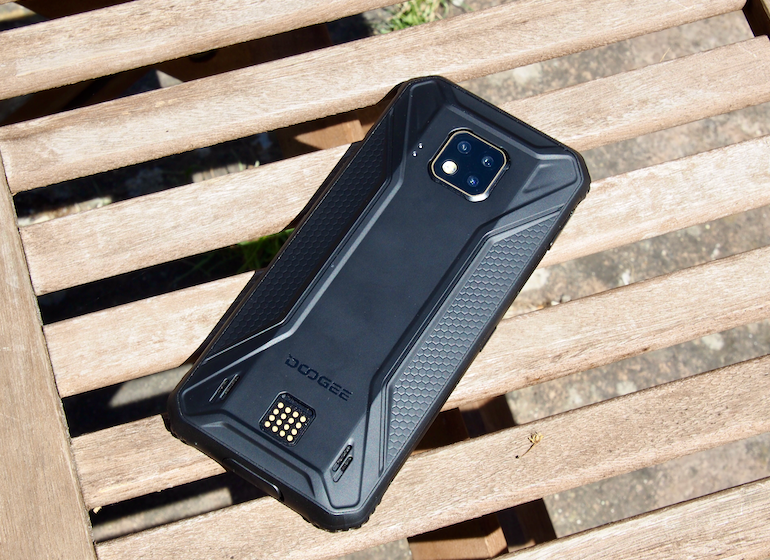 Doogee have made great progress with their design. Compared to the squat, awkward-looking S60 released last year, the S95 has better ergonomics and looks more refined. 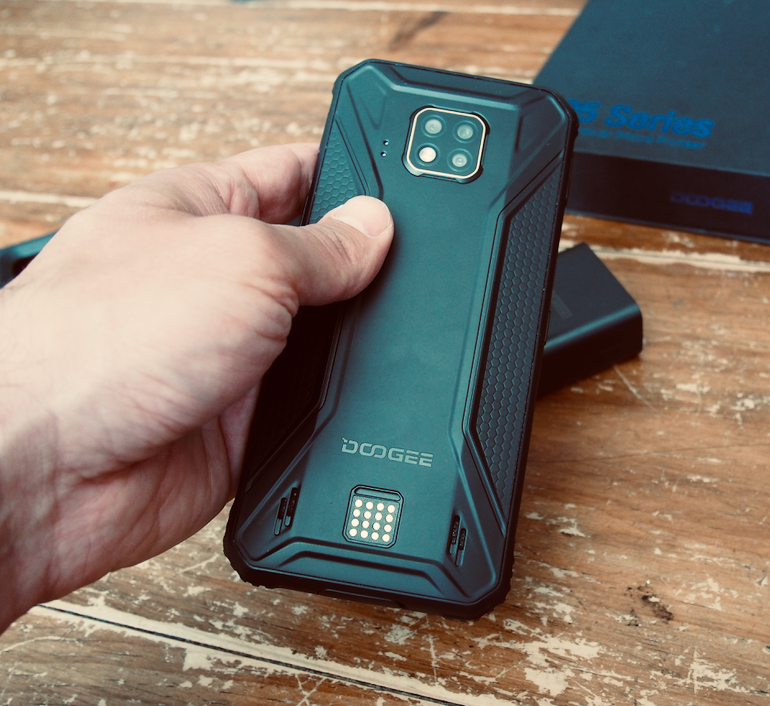 Reassuringly chunky, the S95 Pro is no lightweight. It weighs almost 290 grams, but it has good weight distribution and a design that makes it easy to to get used to its bulk 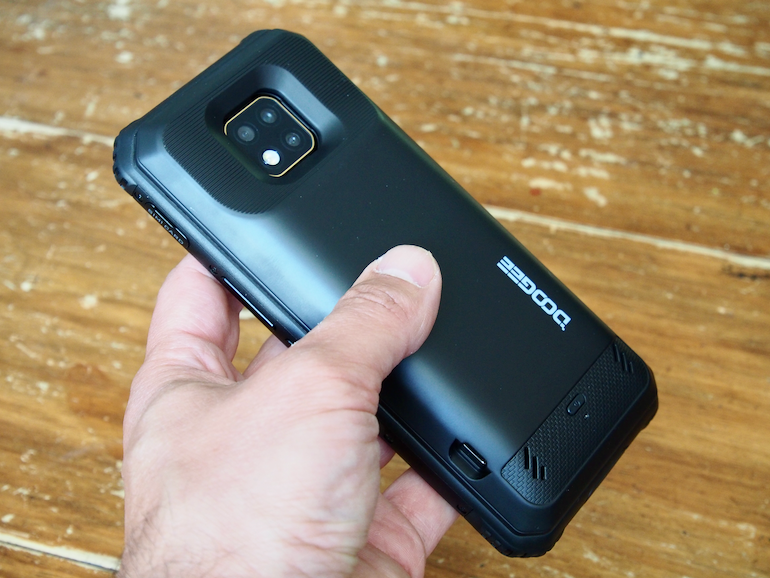 The magnetic battery pack can be a useful way to top-up the charge if you have no other option, but the module feels too loose. 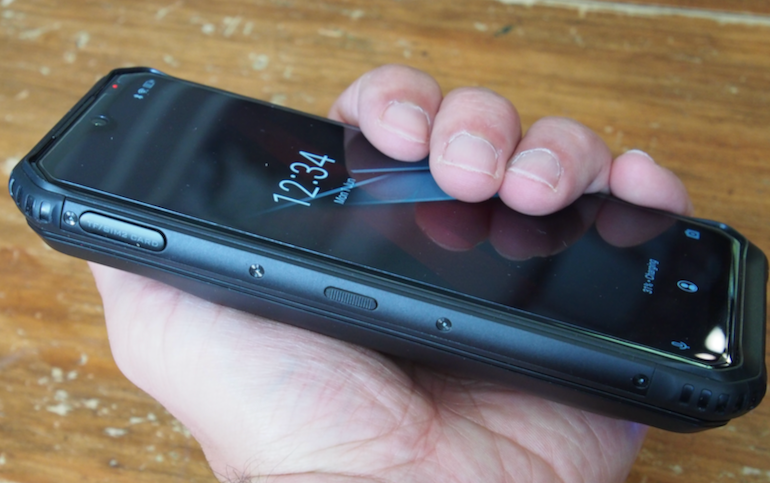 The optional battery pack adds quite a hump and an additional 100 grams.

The screen is built with reinforced Gorilla glass while the body is a mix of black metal and shockproof plastic. Doogee has come a long way when it comes to design. The S95 Pro appears more refined than its predecessor thanks to its improved screen-to-body ratio and more slender proportions. 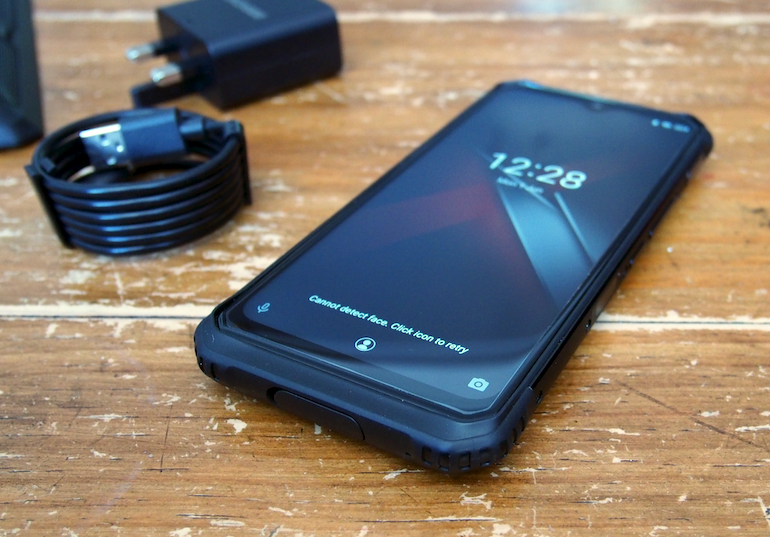 As tough as a display can be, it is unlikely to survive a corner drop without cracking. Doogee has taken extra care to protect the weakest points with extra thick armour raised guards.

The Doogee S95 Pro supports two SIM cards. You'll find a SIM drawer that can also be used to install a microSD card for additional storage. The one on the right is a standard SIM slot for a Nano SIM. Both are covered by flaps and require a bit more effort than the usual pinhole-push release. 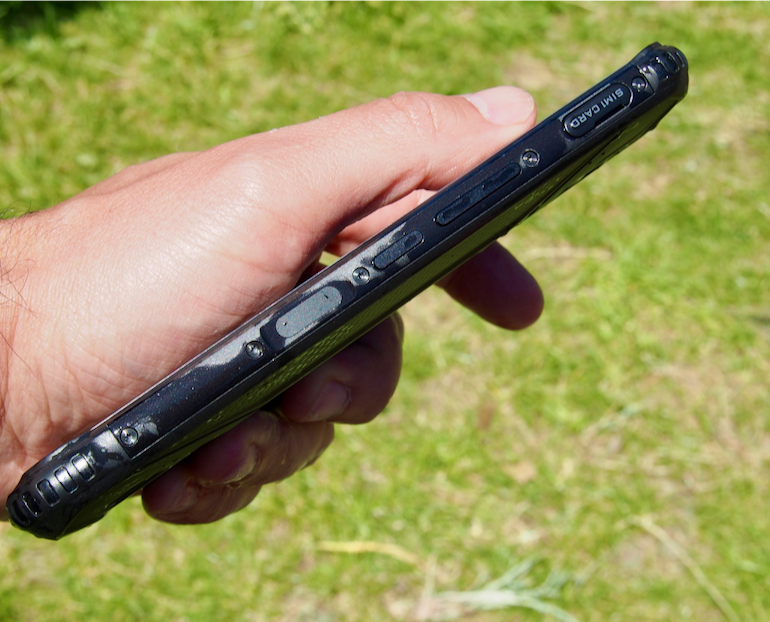 On the left side, you'll find an additional multipurpose button that can be customised to switch on the torch, launch audio recording or indeed any app of your choice. The multifunction button also supports single, double or long-press making it very versatile and highly customisable. 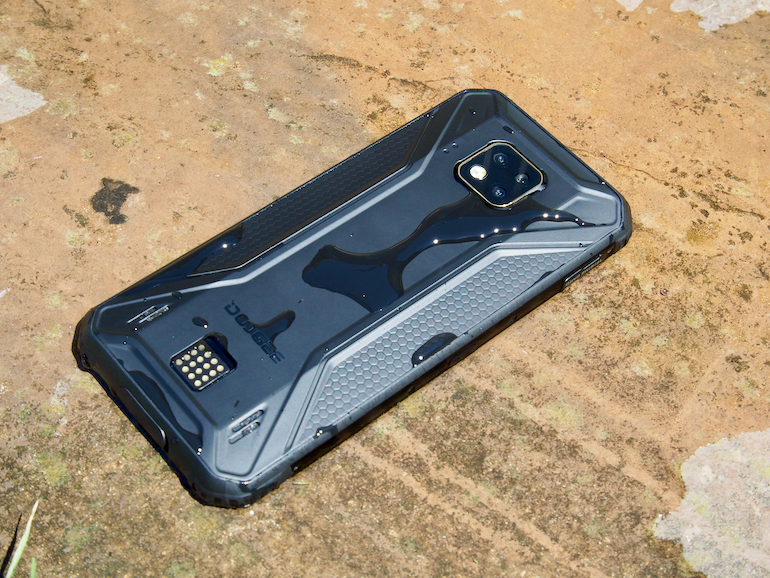 You can take the S95 Pro kayaking without a second thought.

The device is rated with the IP68/IP69K standard, making it capable of withstanding being submerged in 3 meters of water for up to 4 hours. The IP68/IP69K rating also ensures that the body has complete protection against dust ingress.

The IP rating is accompanied by MIL-STD-810G certification - a series of tests including shock, vibration and exposure to extreme temperatures. In practical terms, you'll be safe dropping your S95 on concrete with no consequence but possibly a slight scrape on its body. But it’s still probably something you should avoid doing.

The 6.3-inch screen uses IPS LCD technology, and it’s sharp enough for casual use, games and the odd Youtube video.

If you're serious about video streaming, however, you better look elsewhere: colour reproduction and contrast are generally mediocre.

Brightness is also lacking, and if you're used to an AMOLED screen, you'll be disappointed by its apparent dimness when used outdoors.

The Doogee S95 Pro can be purchased with an optional clip-on module kit. It includes an additional battery and an external speaker. Neither of the extra modules has the same water and shock resistance as the phone.

Unlike mainstream smartphones, the quality of the camera should be a secondary concern for the Doogee S95 Pro customers. 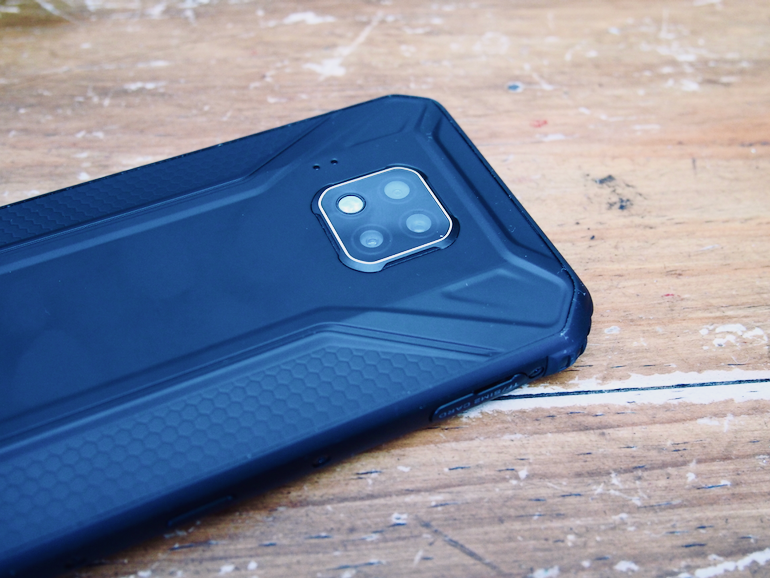 The three lens setup is very similar to what you'll find in a regular mid-range phone. Results are hit and miss, especially indoors, and focus can be slow. If you compare it with the tough phone category, however, this is the best you can buy

It comes with a triple camera setup including a 48-megapixel, a wide-angle and a soft-background depth sensor for bokeh effect.

On paper, this setup is identical to the one found on many good mid-range devices but don't assume this means you'll get similar results.

The primary camera is slow to focus, especially when indoors, so it will require a bit of patience and a steady hand to produce sharp images.

When things get really dark, however, you can switch to Night Mode. It requires you to keep the phone perfectly steady while the exposure takes place, but the results are pretty impressive. 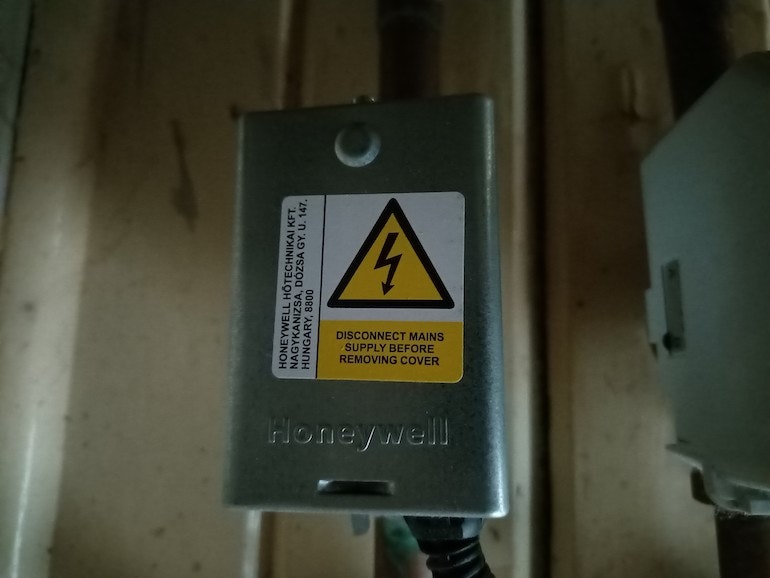 As long as you can keep the phone steady. The Night Mode will work wonders. This was shot without flash in a very dark airing cupboard with hardly any natural light 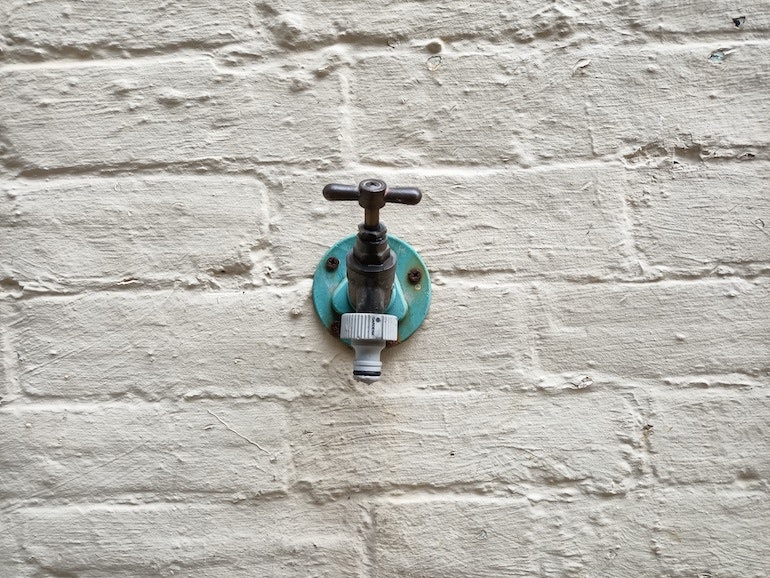 You'll find some excessive contrast and saturation but colours aside, this is a cut above similarly priced specialised phones with its level of detail 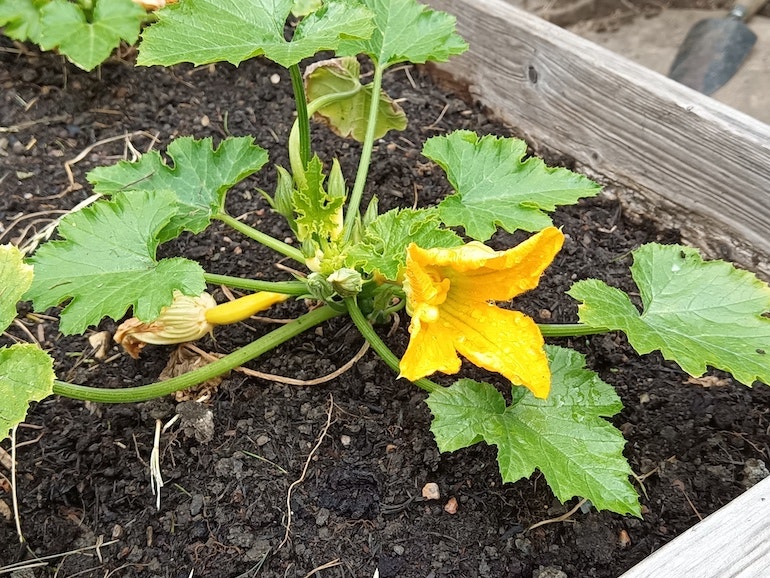 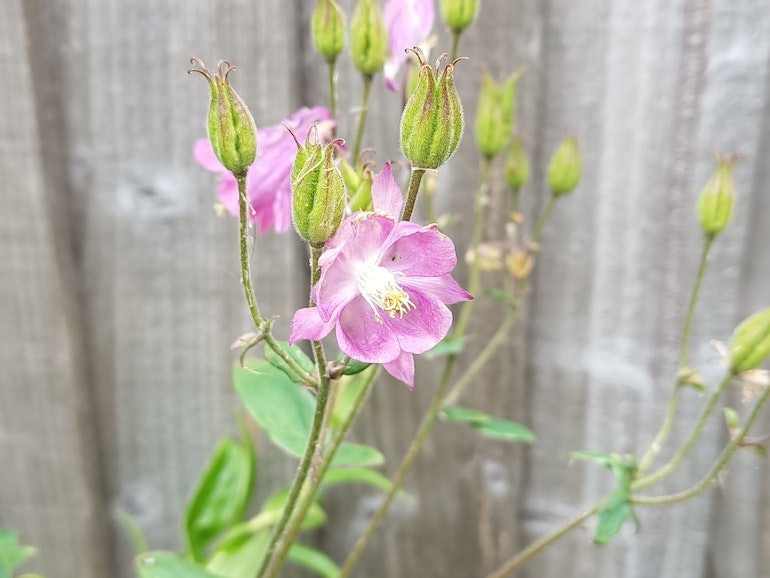 Plenty of effects including soft background. Don't expect the same results indoors though.

The Doogee S95 Pro runs Android 9 with a light-touch skin designed to take care of the hardware-specific utilities like the multifunction button and gestures.

There are virtually no unnecessary pre-installed apps and what you'll find is what we usually refer to as "Stock Android".

I have no complaints about performance. The device uses a Helio P90 processor, typical for mid-rangers and perfectly capable to offer a lag-free experience. Coupled with 8GB and a 128GB of storage, the specs of the S95 Pro represent good value for money and a phone that will have no trouble supporting all the apps you need as well as future updates. 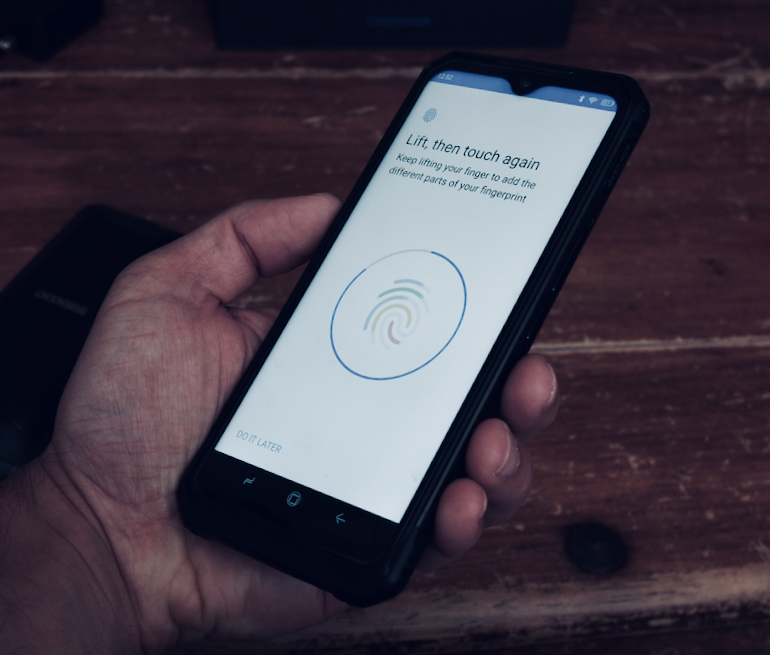 The fingerprint sensor on the side is pretty fast and easy to set up.

Biometric unlocking is based on standard Android software and includes fingerprint as well as face recognition. The fingerprint sensor located on the right side is a breeze to set up and highly reliable. Face recognition relies on the 16-megapixel selfie camera and while not as fast as we've observed on better-known brand, it works well in a variety of conditions. 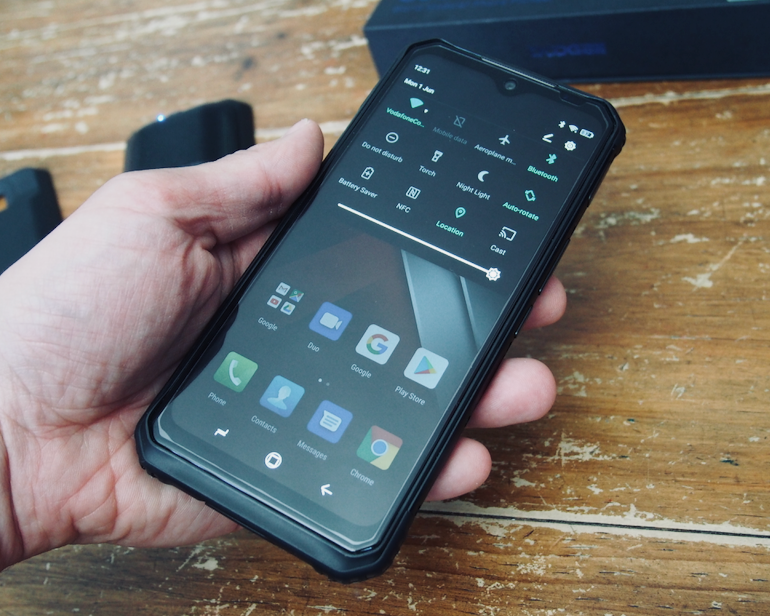 The interface is easy to navigate and there is a good level of customisation. Some of the utilities such as display settings and power management, however, show some poor standard of translation to English

By giving the S95 Pro a battery capacity of 5,150mAh, Doogee proves they mean business. The phone I tested stretched comfortably to around 18 hours of regular use and, if an unplanned detour adds a day or two to your Arctic expedition, an optional 3,500mAh battery pack will add a good 10 to 12 hours of use. 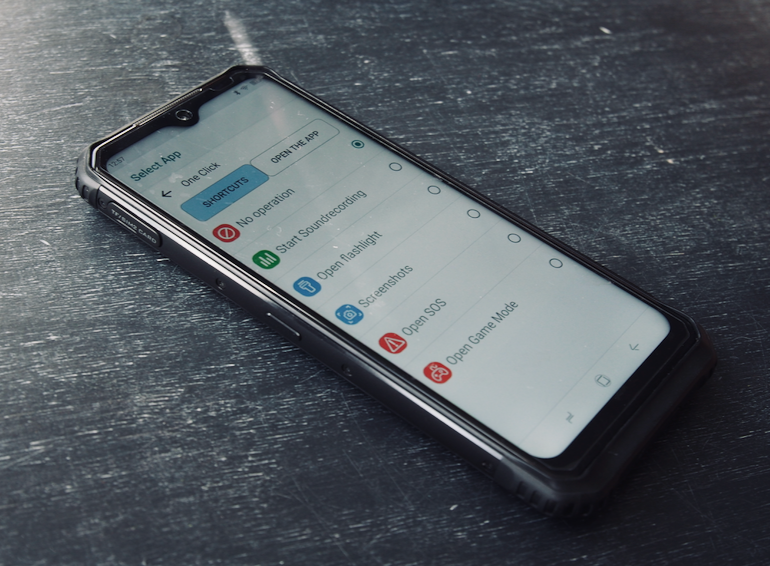 Plenty of customisation tools are available but the interface, and English translation, needs refining.

The Doogee S95 Pro is not just for oil rig workers and extreme parkour runners. Active teenagers would probably twist their nose at the unknown brand, but how many of their friends will have a phone built like a tank?

It also makes perfect sense as a second phone to take camping or outdoor activities. The shockproof construction will ensure you will still have a working phone at the end of the mud run, but more importantly, you'll be able to give it a good wash afterwards. 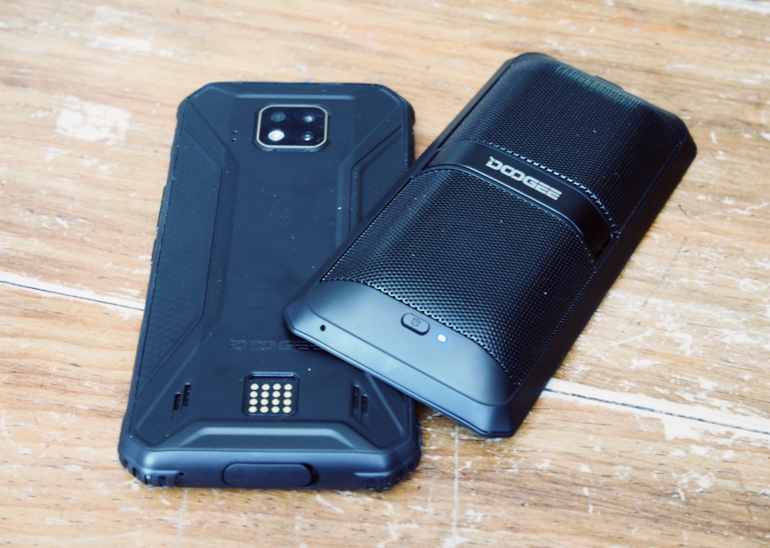 The optional modules are an interesting proposition, but the speaker sound is forgettable, and an external power bank offers better value for money. 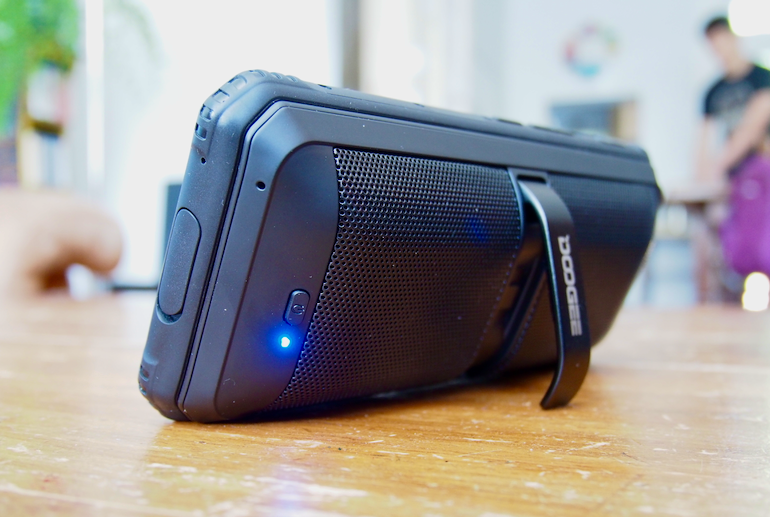 The Doogee S95 Pro retails at £340 for the base version while the SuperMod version, which includes the additional battery pack and the speaker will set you back £420.

The additional modules can be practical, but they are hard to recommend when compared to the value for money of an external power bank that would carry at least four-times the charge.

The speaker quality is also nothing to shout about so if you're planning a beach party you'll be better served by something like the UL Wonderboom series, which are also waterproof and offer superior quality.

If you're in the market for a robust device to take on your quest to El Dorado, the Doogee should be the first on your list.

The Doogee S95 Pro can be purchased directly from https://www.doogeemall.com/en/buy/s95