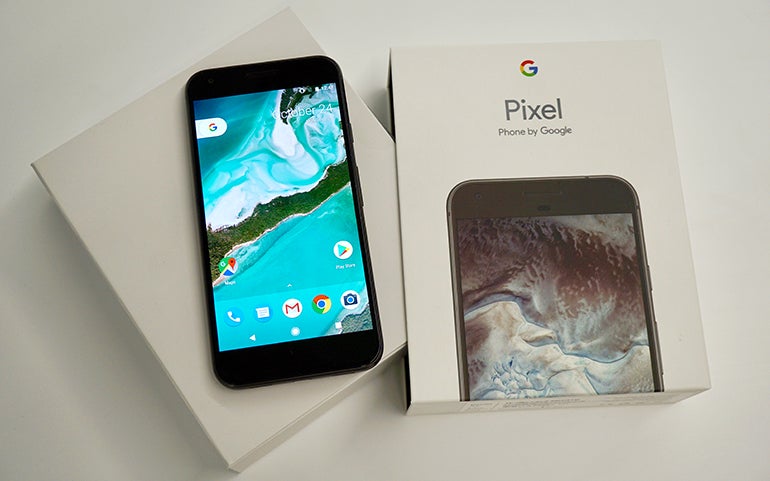 So, farewell then Nexus. Since debuting in 2010, the Nexus range of Android phones helped make Google's mobile operating system the most-used in the world.

It included some of the best Android phones ever made, including the original Nexus One, the Nexus 4, and last year's Nexus 6P and 5X. But now Google has dropped the brand.

In its place come the Google Pixel and Pixel XL, which are touted as the first phones made by Google. They're actually made by HTC, but there's no HTC logo in sight.

But that's for a very good reason: whereas Nexus phones were created by a third-party company (Samsung, LG or HTC), the Pixel phones were designed, engineered and branded by Google. HTC just put them together.

In other words, for the first time, Google has full control over both the software and hardware, just like Apple does with the iPhone. That means we should get exactly the phone that Google intended. 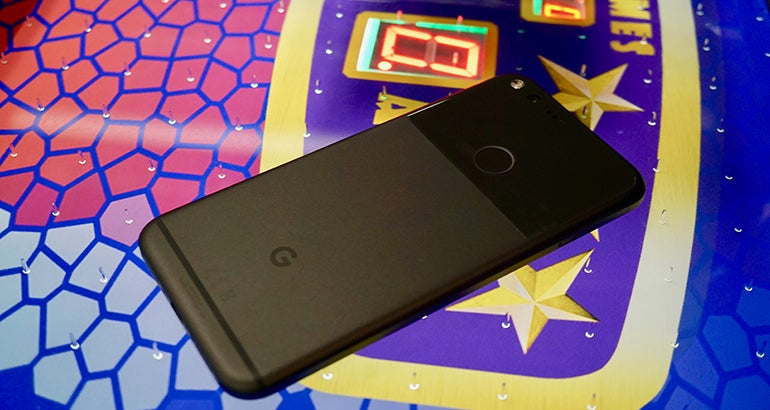 There's no getting away from it, the Pixel phone does look a bit like the iPhone 7. It has familiar-looking bezels (that's the rings around the screen) on the front, curved corners and antenna lines across the back.

We tested the black model, and with the screen off, it looks a bit too dark and nondescript for our liking.

If we were buying one, we'd go for the silver, but that's purely a matter of personal preference.

Whereas the Nexus range was always slightly more affordable, Google wants the Pixel to compete with the iPhones and Galaxy S7s of this world. So premium materials and high-end design are the order of the day.

It's made of metal (that plastic Nexus 4 is but a distant memory), with a glass section on the top third of the back.

This helps position it in your hand, and makes it easier to find the fingerprint reader, which is on the back. It also breaks up the look a bit, preventing it being a monolithic slab. 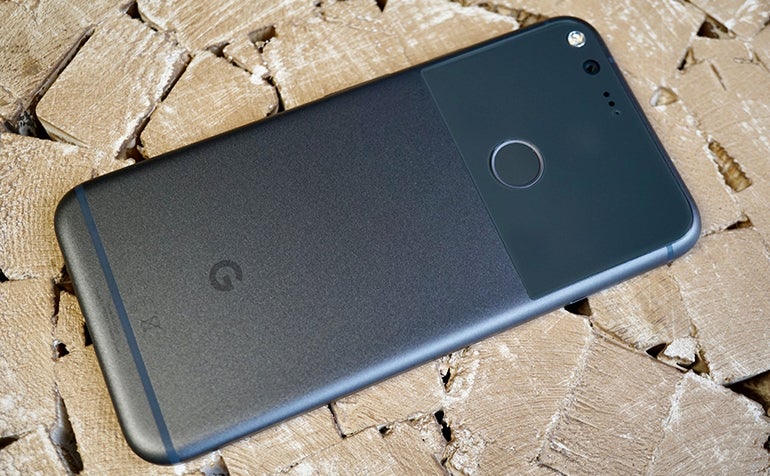 It has a wedge design, but it's barely noticeable. Basically, that means the top is slightly thicker than the bottom, so the camera lens doesn't stick out. But it's still pretty slim, and – crucially – doesn't make the phone top-heavy.

We like the Google logo on the back too – it's just a G, rather than the full word. It's subtle, and dare we say it, classy. 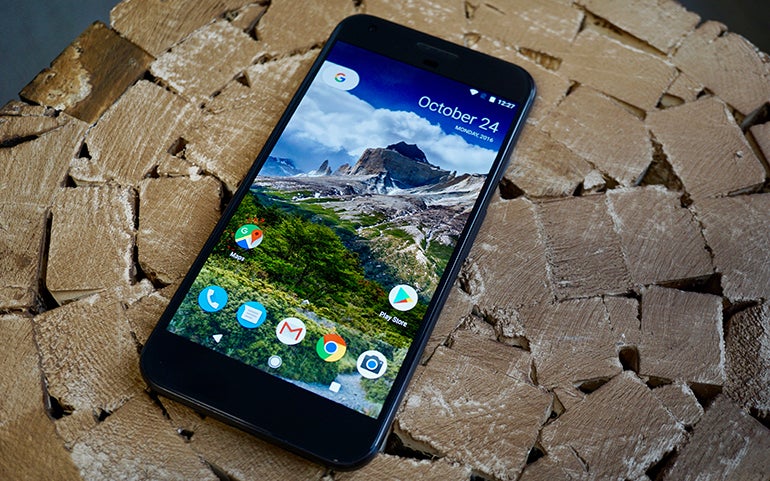 The result is that the XL has a Quad High Definition (QHD) resolution, compared to standard HD on the Pixel. The gives it a pixel-per-inch count of 534ppi.

So what? you may ask. So images on the XL model appear sharper than on a lot of phones. That's because the higher the pixel density the closer they are together, meaning that the image is crisper.

The colours are vibrant without feeling too sugary, and the contrast (the difference between white and black) is massive.

If we do have a criticism, it's that it could be a little brighter – in outdoors conditions particularly, it can seem a bit dim. But overall, two thumbs up. 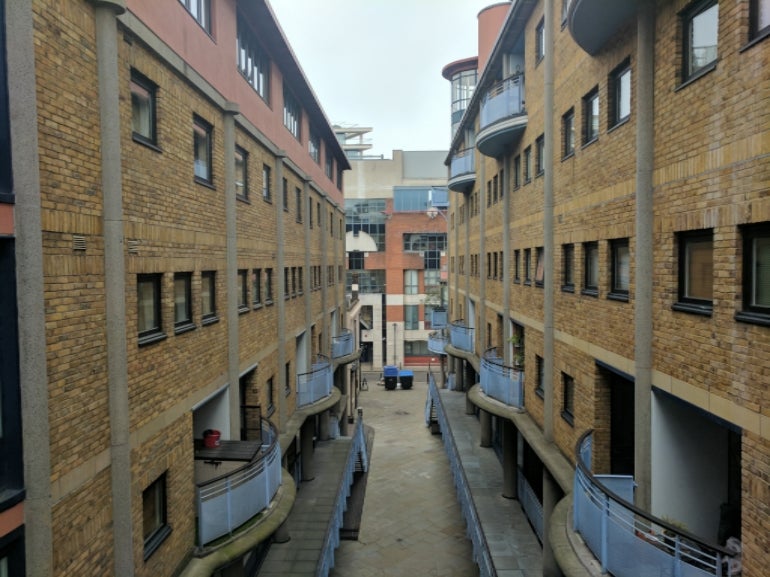 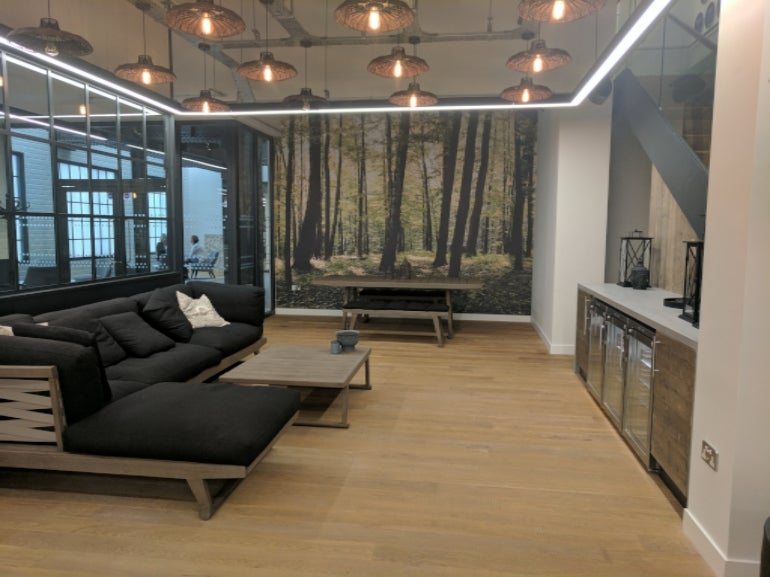 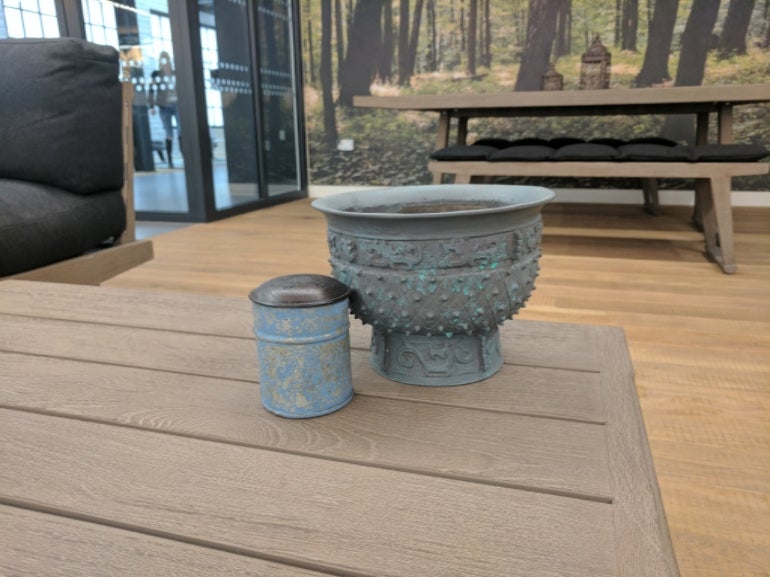 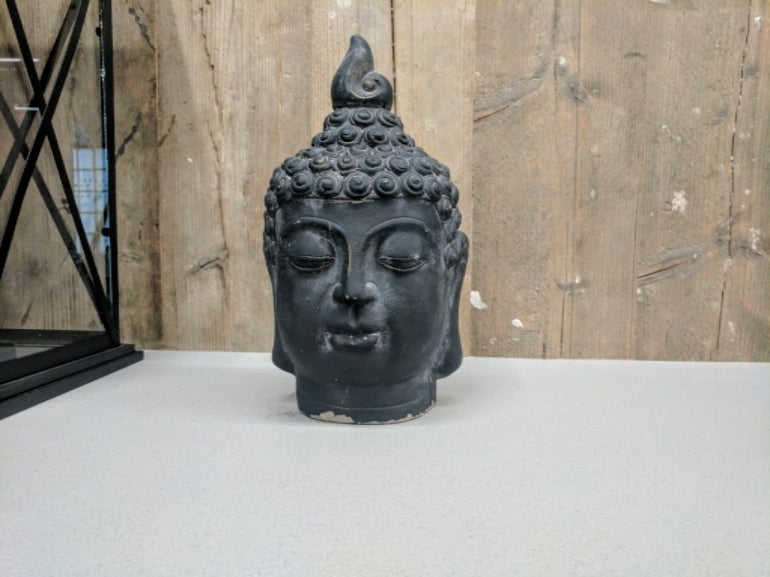 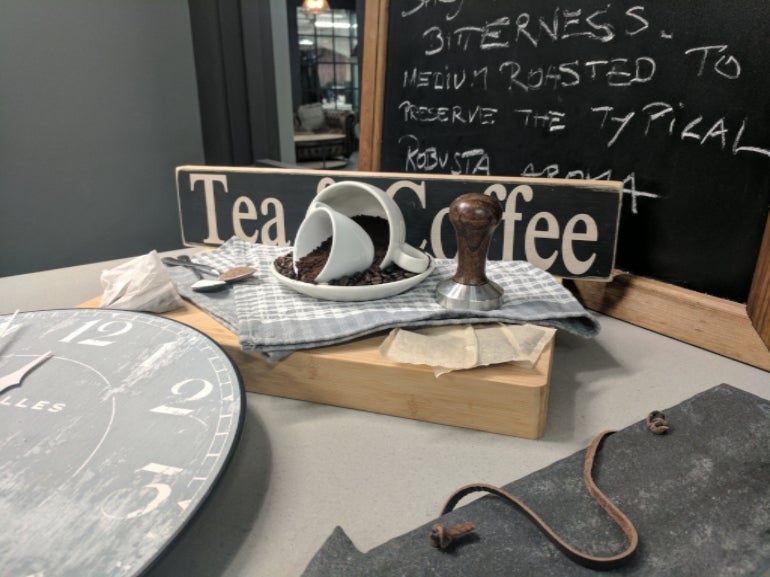 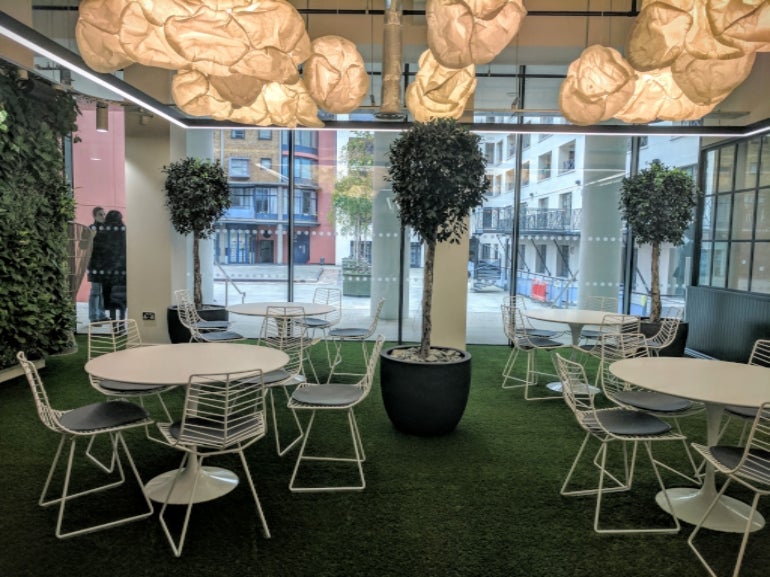 The Nexus range always suffered from slightly sub-par cameras, especially at a time when the iPhone and Samsung devices were making great strides in this area.

But Google has revamped the camera for the Pixel from the ground up. In fact, the search giant is so confident in its capabilities that it's marketing it as "the highest-rated smartphone camera. Ever." That's based on a score from the camera specialist site DxOMark.

Of course, lab tests are one thing and real-world performance is quite another. But we're happy to report Google's boasting is justified: the camera is up there with the best.

Snaps are fit to bursting with detail, with close-ups looking impressively sharp.

Its accuracy of colour reproduction is uncanny – it's equally capable of capturing natural skin tones as it is the vibrant red hue of a double-decker bus. But it's in low light where this camera really shines.

It brightens up your subject no end, and skin tones even look just right when using the flash.

If you like taking photos in dingy dive bars or dungeons – and who doesn't? – this is the phone for you.

It's quick, too. The app opens in a trice and there's no delay once you press the shutter button.

The decision to have HDR (High Dynamic Range) as the default mode is also a wise one.

HDR gives your shots more depth, making them look more lifelike. Usually you have to manually switch it on, which means diving into menus. But by making it the standard mode, Google has saved us all valuable seconds.

If you want even higher quality shots, you can opt for the HDR+ mode, though that does slow the camera down somewhat. So you have to weigh up what's more important to you: speed or quality.

The Google Photos app can even make a little GIF of the shots you've taken with burst mode.

It records 4K videos too, and while it doesn't have optical image stabilisation, Google has added its own video stabilisation software to do the same job.

It's decent, though at times makes it appear that you were floating along while recording. For our money, optical image stabilisation would be preferable.

How does the Pixel's camera measure up to the iPhone 7's? We take a close look here: iPhone 7 and iPhone 7 Plus camera review.

The Pixel has one key selling point – it's the first phone with the Google Assistant built-in.

This is a seriously clever personal assistant that lets you make bookings and conduct searches with your voice alone and uses artificial intelligence to hold a conversation with you. Ask it "What's the weather like?" and it'll tell you.

It'll then remember what you're talking about, so you can just ask "What about tomorrow?" without specifying what you mean. And it gets it.

The more you use it, the more it learns about you, and so the more accurate it gets. It also draws on Google's vast database of knowledge to deliver all kinds of information.

But it's not perfect. It doesn't have the sassiness of Siri. And its conversational skills leave something to be desired – when we asked it "How are you today?" it replied that it was having a great day, and had been looking up fun things to do.

"What did you find?" we inquired. "Hmm. I'm not sure," it replied. We've had better conversations with phones, frankly.

As you'd expect, the phone performs brilliantly, thanks to its Qualcomm Snapdragon 821 processor and generous 4GB of RAM.

Battery life is also great – on more than one occasion, it lasted us through two full days.

Android 7.1 Nougat is a dream to use, and because it runs a so-called 'vanilla' version of Google's operating system, it's blissfully free of any unneccessary tweaks to its layout that sometimes blights handsets from the likes of LG and Samsung.

The fact it runs pure Android means it'll be first in line for Google's software updates, too.

But it's not all good news. The screen isn't 'always-on', and doesn't wake when you pick it up (like the iPhone's does), so you can't see notifications at a glance. Instead, you have to press a button to wake it, which already feels a bit antiquated.

There's no expandable storage, which is odd for an Android phone. That disappointment is tempered a bit by the fact that all Pixel owners get free unlimited cloud storage for photos and videos.

Even so, being able to slot in a microSD card is a major draw for a lot of Android users; indeed, when Samsung didn't include expandable storage in its Galaxy S6 handset, it faced a backlash. So Google's decision is an odd one.

Storage options are 32GB or 128GB, which is a bit 'all or nothing' for our tastes.

It's also not waterproof, unlike the new iPhones and Samsung's latest handsets. It's only splashproof. So be careful around the pool.

This is the other bit of bad news. While Nexus devices were much more affordable than flagship Android phones, the Pixel is positioned right at the top end. And its price reflects that.

The standard Pixel starts at £599, and the Pixel XL at £719 (the only differences between the two are the screen size and battery capacity). These are exactly the same prices as the iPhone 7 and 7 Plus respectively.

If you want it on a monthly contract, prices start at £50.99 on EE with nothing to pay upfront for the standard model. Or £55.99 per month for the XL, once again with no upfront charge.

It is the best Android phone around right now though. So if you've got the money, it's a great buy. 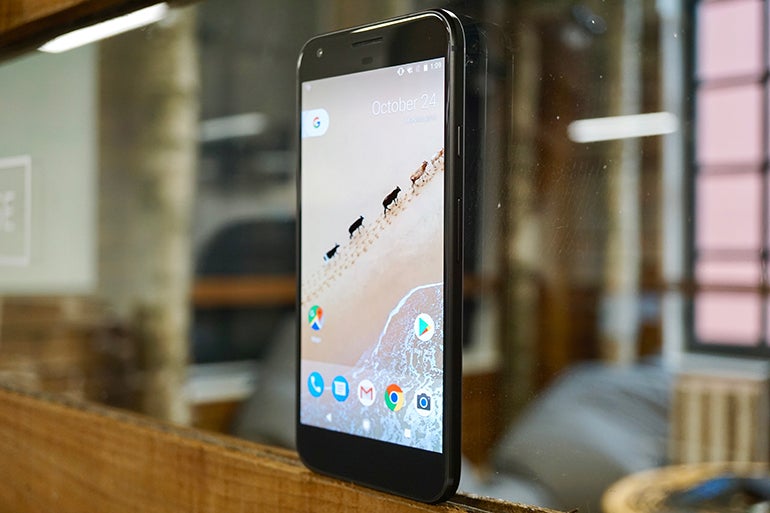 The Pixel is basically an iPhone made by Google. And that's a good thing. The software and hardware work in harmony to create a true rival to Apple's flagship and a very good alternative to the Galaxy Note 7.

If you're set on an Android handset and want the best phone powered by Google's software, look no further.