The U11’s ultra-glossy finish certainly gives it a premium look.

And with a 5.5-inch screen, it certainly feels great to use, although perhaps it might be a bit large for those smaller-handed smartphone users.

But the range of metallic colourways has us a bit smitten. 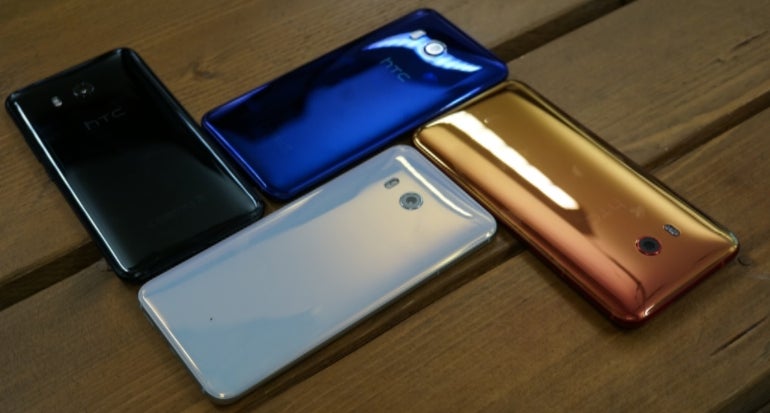 Looks aren’t everything. But in a world where all smartphones look more or less the same, it’s nice to see a handset that stands out aesthetically.

The U11 has a ‘liquid surface’ finish, meaning that the phone actually appears to change colour depending on how they catch the light. And it’s available in five different colourways.

Our personal favourite is definitely Solari, which looks red when held upright and gold when you lie it down flat.

The back is a bit of a magnet for fingerprints, though, so you’ll probably want to use the clear case handily included in the box.

Another interesting design feature is they’ve left out the 3.5mm headphone jack. Still, HTC has included an adaptor with the phone.

So, if you don’t own a wireless earbuds, you can still listen to music without having to splash out on a new pair of headphones.

Better still, the adaptor comes with a built-in amplifier to improve the sound quality. 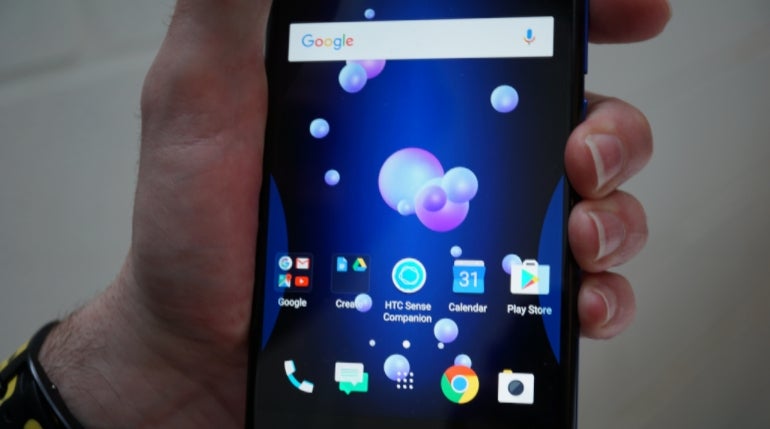 The HTC U11 is a big phone. The screen spans 5.5 inches diagonally, which is on the larger side (it’s the same size as the iPhone 7 Plus).

The resolution is 2,560x1,440 pixels, which makes it Quad HD, putting it up there with the best smartphones available right now. And you can tell.

Colours pop from the screen, and there’s a huge gulf between black and white, which is great if you’re watching moodily-lit scenes as you’ll be able to actually see what’s going on.

Viewing angles are also impressive. You can see everything on the screen from quite a severe angle, which is handy if you want to show a funny video to a group of friends all gathered around your new toy.

The screen sticks with the standard 16:9 aspect ratio, unlike the LG G6 and Samsung Galaxy S8, which vary this a little.

But unless you’re bang into file formats, you don’t need to worry about this.

But the screen isn’t the only way to interact with the U11. Far from it.

The most unusual feature is the fact that you can squeeze the phone to activate certain functions.

By default, it’s set to open the camera with one squeeze, and to take a photo with the second. Squeeze and hold, meanwhile, will launch the Google Assistant helper so you can speak a query or command.

You can personalise which functions the squeeze activates, and it works while the phone is in sleep mode too, so you don’t have to wake it, just jump straight to your function of choice.

We had to reduce the squeeze force level right down low, as otherwise you have to apply quite a bit of pressure before it registers.

But if you’re used to Trump-like handshakes, you probably won’t have a problem.

Overall, it’s a fun way of interacting with the phone. And it’s certainly different.

It will also be the first phone to come with Amazon’s Alexa voice assistant on board. Though you’ll have to wait until July when the update arrives.

Google Assistant comes as standard, as does HTC Sense Companion, HTC’s own take on a built-in digital butler.

At the moment, our pick is Google Assistant, though we’re intrigued to see what Alexa can do on a phone.

Downsides? The screen isn’t always-on, which means you have to wake it to see the time, date and notifications.

It seems like a missed opportunity, and a bit behind the times considering most other high-end handsets’ screens at least wake when you pick them up.

Strangely, HTC has kitted out the U11 with a higher-resolution front camera than the main one. Maybe it’s a reflection on our selfie-obsessed times.

You’ve no need to worry, though. The 12-megapixel main camera is excellent. Dual-pixel autofocus means it locks onto its subject in no time, while optical image stabilisation all but eliminates blur. Of course, this isn’t much good if the camera itself isn’t up to scratch. But thankfully it is, producing snaps with bags of detail, even in low light.

The auto-HDR mode is also handy, as it makes your photos brighter with more accurate colours.

If we have to pick a fault, it’s that there’s a slight delay between hitting the shutter button and the picture being taken. It’s only a fraction of a second, but it’s noticeable nonetheless.

The front snapper, meanwhile, is a 16-megapixel number, with no fewer than three selfie modes. Which is perfect for Instagrammers and people who have lots of photogenic friends.

One of the first things you notice when using the U11 is the lack of bloatware. This means that you won’t be lumbered with a phone full of unnecessary apps, leaving you with much more room to download what you want.

HTC has clearly listened to customers and not insisted on pre-loading its own versions of basic apps, such as calendar and email. Which is most welcome.

There is one app that distinguishes HTC’s handsets from others: BlinkFeed. This is basically a news feed that shows you the weather, headlines etc. based on where you are. It’s a swipe away from the home screen, and is pretty similar to Google Now.

Amazon’s Alexa personal assistant hadn’t been activated at the time of our review, so we couldn’t test it. Then there’s the Edge Sense squeezability feature that we mentioned earlier.

Under the bonnet, the U11 has Qualcomm’s Snapdragon 835 CPU – this is Qualcomm’s latest, and one of the fastest around right now. Clocked at 2.45GHz, and partnered with 4GB of RAM, the U11 flies through tasks with absolutely no slowdown or stuttering.

It’s also one of the few phones to support hi-res audio. This is a file format that sounds crisper than standard MP3s, and is offered by streaming services like Tidal and Qobuz. The BoomSound speakers also prove plenty of oomph should you want to share your tunes with others.

In terms of battery life, we’re looking at a full day’s use before needing juicing up. That’s fairly standard for a high-end smartphone.

The HTC U11 costs £649 SIM free, which is about as much as you’d pay for an iPhone 7, Samsung Galaxy S8 or Google Pixel.

All of these alternatives are stellar handsets, so competition is certainly fierce. But there’s a lot to love about the U11. And in terms of the screen, camera and audio, you certainly get a lot of phone for your money.

The squeeze-to-control feature might have captured the headlines, but it’s not the most notable thing about this phone. HTC has produced a solid, decent flagship for 2017, with an impressive screen, great camera and some pretty innovative features that fans are sure to love.

Tempted to buy an HTC U11? Check out all our best deals.