No one is denying smartphones are now more capable cameras than ever – the image quality is brilliant, and they have enough options to rival proper standalone cameras. The only issue lies with the camera controls.

Prodding a screen doesn't come close to the feeling of depressing a shutter button to reel off a few shots. Which is why LG has launched the Cam Plus for the G5.

It makes the phone easier to grip, and adds manual controls too. Plus it has its own battery, to keep your phone running longer.

When clipped into the G5, the Cam Plus more than doubles the handset's width at that end. It also makes the phone quite bottom heavy.

The Cam Plus' rear surface is made of textured plastic, which makes it easier to grip. Though rubber would have helped it stick to your hand even more.

To get started, you need to plug in the Cam Plus in the bottom of phone and download the Cam Plus Manager software, which is a 3MB download.

This will then pair the Cam Plus with the phone. Now you're good to go. 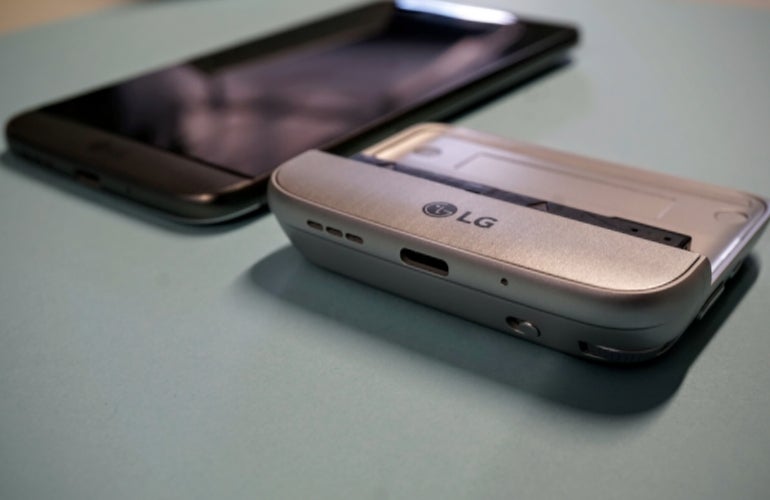 Generally, the Cam Plus feels well put together, and it's supremely easy to work out how to use it.

There's a button for taking photos, one for recording videos, a dial for zooming and a switch for turning the module off and on. And that's it.

The buttons respond fast to presses, so you can get the shot you want. But the Cam Plus is let down a little in this respect by the positioning of the on/off switch, which means you have to change your grip to reach it.

That delay – though minor – could be the difference between capturing a great moment and missing it.

It would be much better if you could activate the module just by pressing the shutter button.

Trying to reach the on/off switch while holding the phone one-handed could also make you drop the phone. That isn't great for something that's supposed to improve grip.

The Cam Plus contains its own 1,200mAh battery. Which is about half the size of the G5's main 2,800mAh battery.

That should provide plenty more battery life, which is always welcome in an age of daily charges.

The Cam Plus is a nice idea, and the extra battery life is a real boon. Our only bugbear is some poor button placement and that the less-than-ideal choice of materials means it's not easy enough to hold.

We enjoyed using the Cam Plus and it certainly makes you feel more like a photographer than poking a virtual shutter button on a screen. Whether that means it's worth the asking price, though, is up to you.