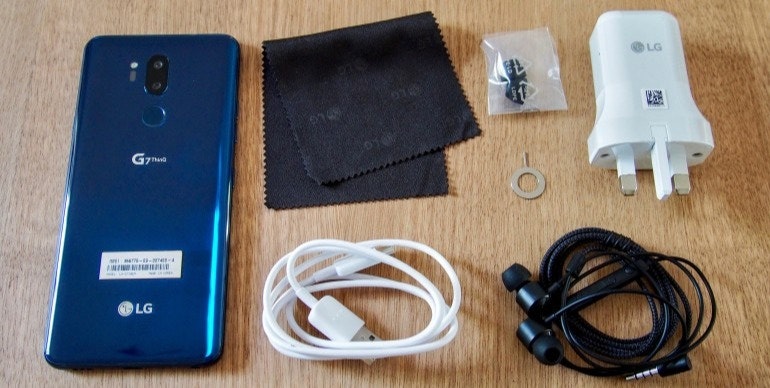 LG has never been shy to try new directions in their design. So it’s a bit of a surprise to see that its latest flagship has quite a familiar look, not unlike many other flagship phones out there.

But that’s not to say it doesn’t look great. Taking style cues from the likes of Samsung, Apple and Huawei is hardly something to be ashamed of. After all, if it ain’t broke, don’t fix it.

And let us not forget that LG was first with the 18:9 ratio device, giving us the all-screen G6 a good month before Samsung released the much-loved Galaxy S8 in March 2017.

Still, like the iPhone X and many other copycat handsets, the LG G7 has a notch at the top of the screen, which houses the selfie camera and flash.

This area of the screen, which LG strangely names “New second screen” in the display setting is in fact separate from the rest of the display and its shape and background colour can be adjusted. 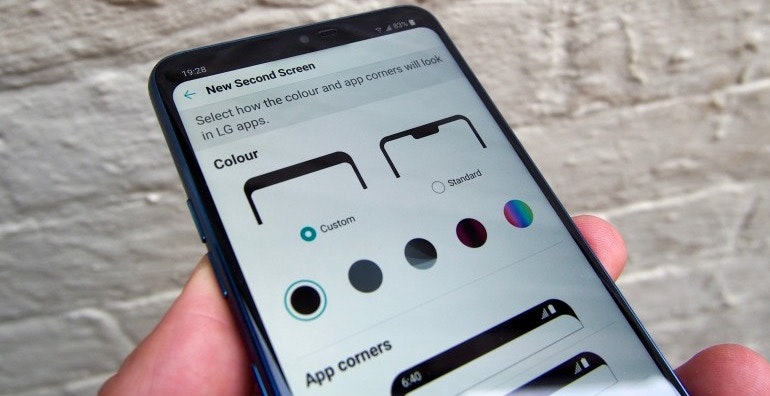 The LG G7 is made of Gorilla Glass 5 ensuring its resistance to scratches and accidental knocks.

It’s a popular choice for high-end smartphones, as it not only protects the device from accidental damage, but it looks and feels really premium too. Although it does have a tendency to attract fingerprint smudges, so you might want to invest in a case to keep it looking pristine.

The back of the LG G7, seen here in the “Moroccan Blue” is not quite mirror-like and has a soft, plastic feel making one of the best designed bodies we’ve tested.

The fingerprint is located at the rear of the phone, quite far up and close to the camera lenses.

The device feels really snug in your hand. It’s well weighted and never slippery despite the glass construction. The Power button is conveniently located on the right of the screen, while the two volume buttons are located on the left, next to a dedicated Google Assistant button.

I love that there’s no camera bump on the back. If you ever use your phone with its back resting on a flat surface, a protruding camera gets very annoying very quickly. 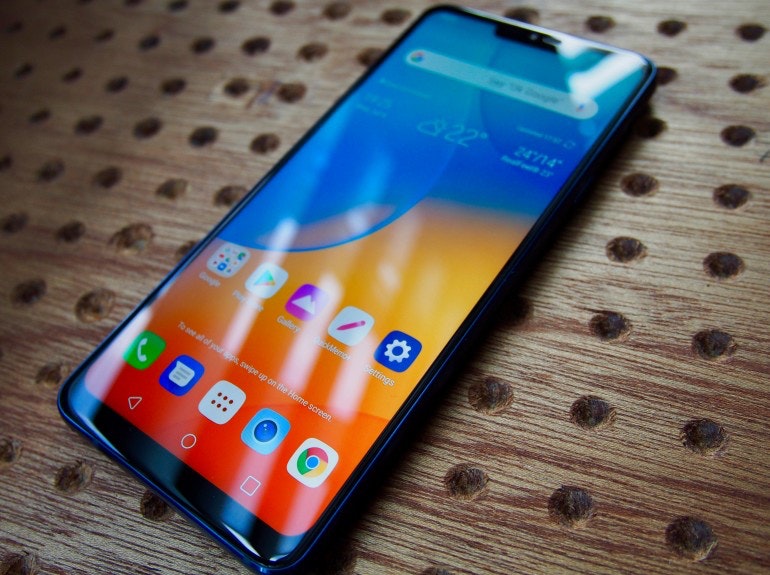 Fingerprint reader at the back and on-screen navigation buttons mean there is no need of a home button at the front so the screen can stretch down leaving a very small bezel.

The LG G7 is fully water and dust resistant to the IP68 standard and will survive being submerged. So you’ll have one less thing to worry about on your trip to the beach.

The audio jack, a feature some manufacturer have started to omit to more easily achieve water resistance, is placed at the bottom.

No time to read the full review? Here's the five key things you need to know about the LG G7 ThinQ.

Compared to rivals using similar screen technology such as the HTC U12+ and Honor 10, the G7 delivers a level of brightness we’ve never seen on an LCD screen. My usual complaints about dimness in sunshine have no place here.

The G7 performs admirably even in full sun thanks to its “Boost” functionality that pushes the brightness of the screen to extremely high-levels. This is a great solution when it’s too sunny to see the screen. But be sure to use it sparingly, as it can hurt your eyes if you use it too often, and it drains the battery at an incredibly fast rate. 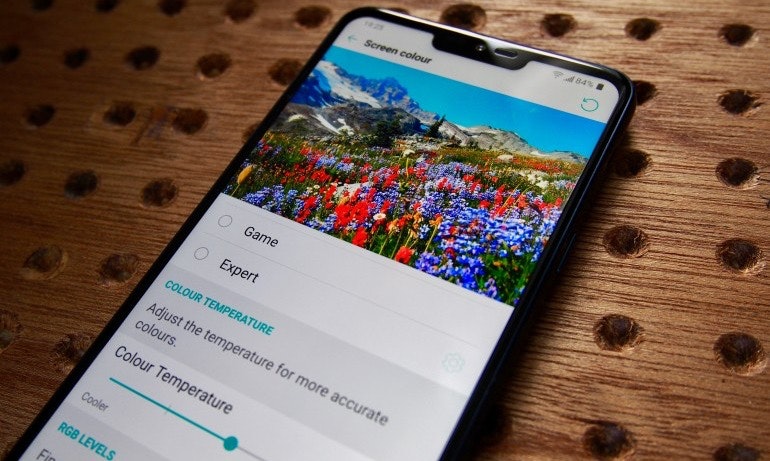 The level of display colour customisation on the LG G7 is impressive.

In everyday use, this is one of the best screens we have seen on any phone. What’s more, the colour profiles can be fully customised in ways that go beyond the usual Cool/Warm/Cinema modes.

Even the evening screen mode, that lowers the blue giving the display warmer tones is well implemented complete with sample image.

The screen notch found on the LG G7 is similar in shape but slightly wider than the ones found on the OnePlus 6 and Huawei P20.

Like its rivals, it can be switched off entirely making the bar at the top of the screen always black. This is purely a personal choice and doesn’t affect functionality as full screen videos and app never wrap around the notch which function exclusively as a notification bar.

Full screen videos and never wrap around the darkened area at the top of the display.

The built-in single speaker is nothing out of the ordinary, loud enough and reasonably punchy especially when resting on its back on a wooden table.

But when you plug in a pair of good headphones, the G7’s sound capabilities really come alive. As well as an equalizer that pops up when first using the audio jack, you’ll find plenty of ways to customise your listening adding surround sound modes, and digital filters. 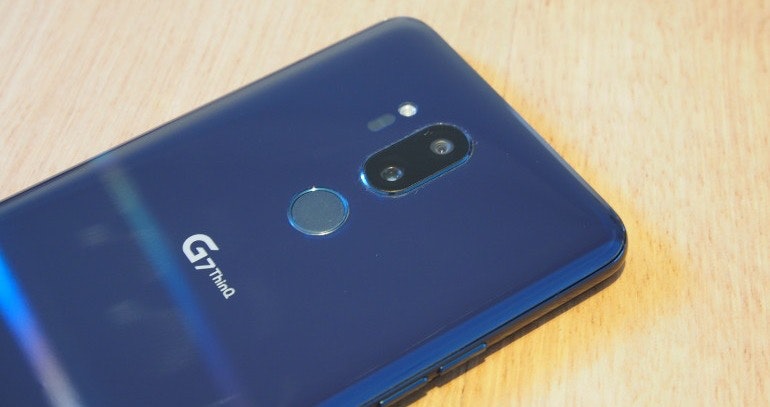 The LG G7 main camera is a dual setup comprising of a standard lens coupled with a wide-angle.

The wide-angle lens can be easily accessed via an icon always present on the right of the camera interface. Switching between the two, however, can sometimes feel a little slow.

When activated, the secondary lens allows to take pictures with a massive 107 degrees field of view, compared to the 77 degrees of the standard one. Unfortunately Optical Image Stabilisation is only present on the standard lens so you’ll need to be extra careful to keep your hands steady when shooting with the wide-angle.

Both Google Lens and AI Cam feature prominently in the interface.

Photos taken with the standard lens are usually good but can suffer from a lack of dynamic range resulting in overly bright areas.

AI scene recognition is currently a very trendy feature some manufacturers have introduced in an attempt to help your average Joe take professional shots with very little know-how. But so far it has failed to revolutionise mobile photography as results can often oversaturate or change colours in unnatural ways.

On the G7, AI mode can be accessed from the main interface and, when activated, will show a cloud of suggestions when pointing at an object. The phone had a surprisingly good success rate of guessing the scene or subject correctly.

Google Lens is another interesting feature if you want look something up without typing. It’s reasonably accurate when the subject contains text but can sometime suggest seemingly random results.

Google Lens can be surprisingly accurate when selecting a packaged product or printed material.

Overall the camera is great and will performs really well in most situations. Low light performance is better than most and the wide angle lens can be extremely useful. 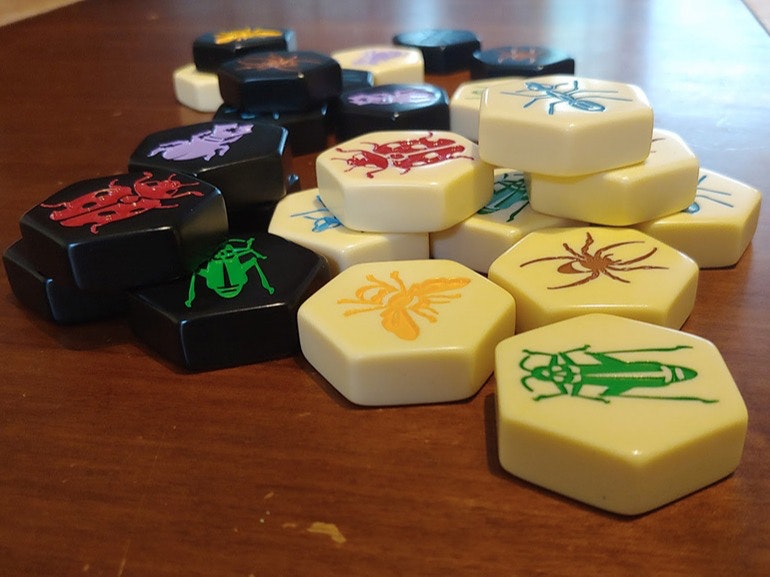 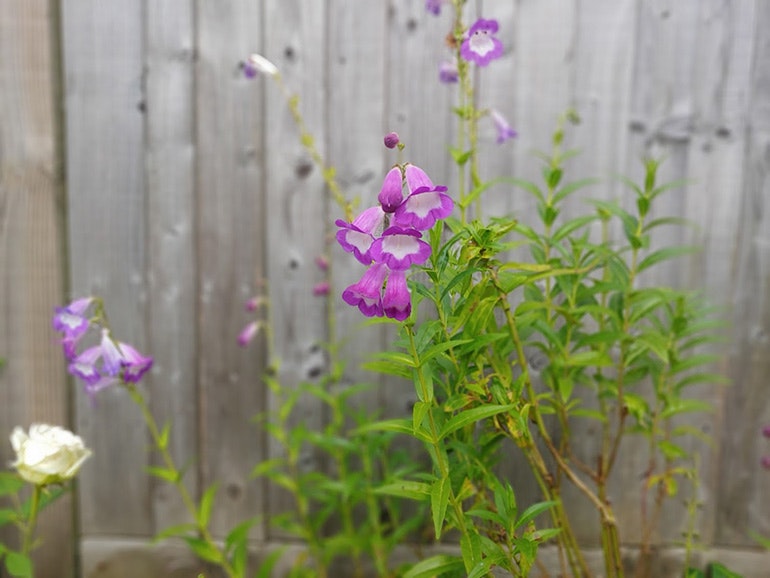 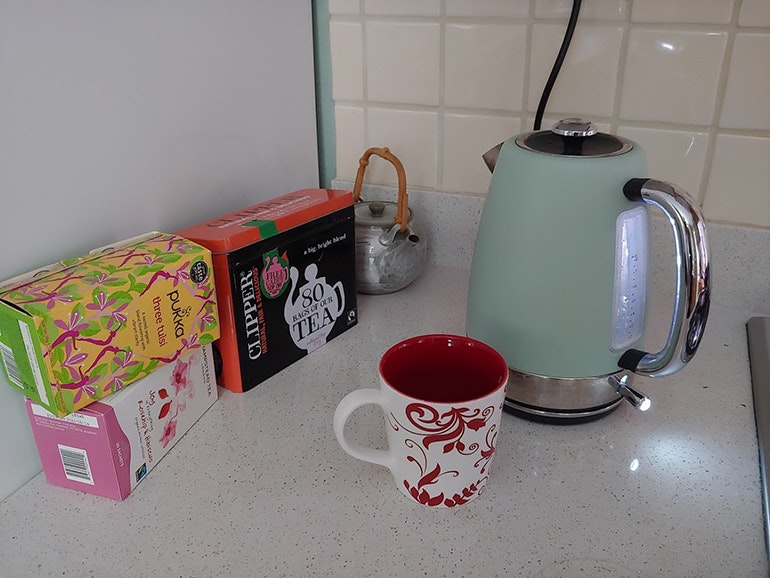 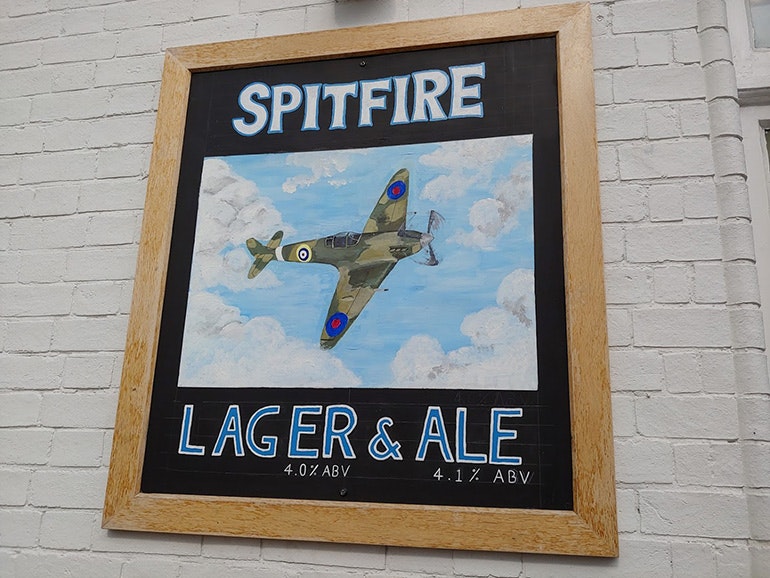 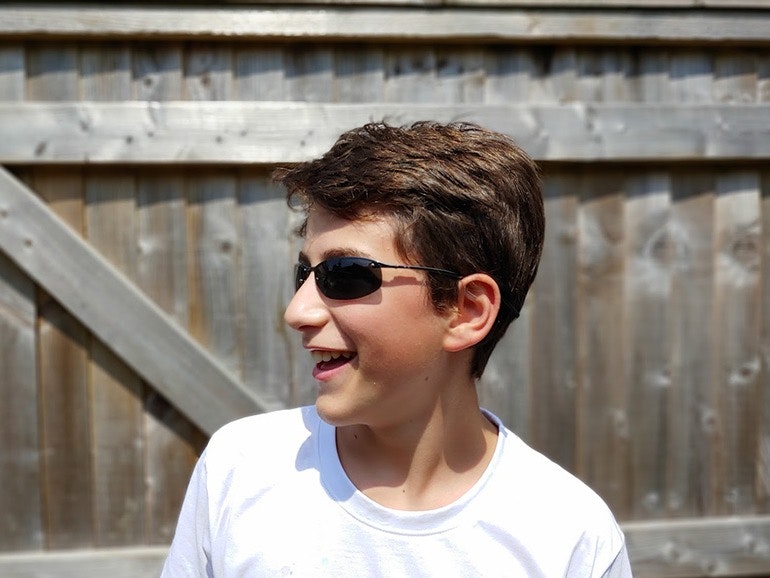 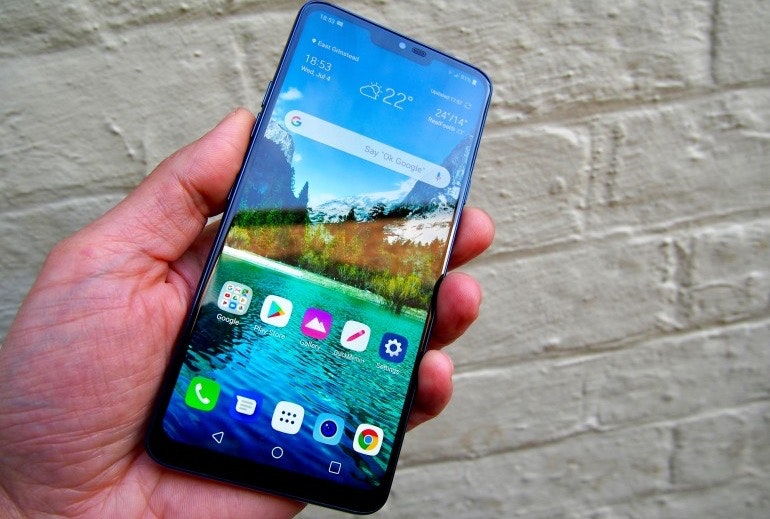 The LG G7 is a premium phone that is specced to comfortably compete with any other rival on the market. If you’re considering it as an option compared to the Galaxy S9, Huawei P20 Pro or OnePlus 6, rest assured that this latest flagship from the Korean manufacturer can cope comfortably with any task you throw at it.

From Asphalt 8 to Star Wars Commander, the G7 never struggled with heavy graphics and makes for a great gaming device.

The LG interface running on Android Oreo is almost identical to the one found in previous models which is well thought out, easy to use and capable of customisation.

Preloaded apps are kept to a minimum. Smart Bulletin, an interface that can be accessed by swiping the left edge of the screen is a genuinely useful solution that can be set to show information relevant to your location, calendar events and performance tips.

The extended notification screen, accessible by swiping down the home screen is also a great way to find shortcuts to recently used apps, website, emails and even played music tracks.

There are also plenty of little features that put the G7 Android skin a cut above the rest. This includes a full file manager and the App Trash functionality that allows you to restore a deleted app if you changed your mind without having to reinstall it from Google Play.

The LG G7 comes with 4GB RAM and 64GB of storage that can be expanded with an additional 128GB using the slot located in the SIM drawer.

The battery has a 3000mAh capacity which is perhaps slightly less than I would expect from a phone of this size. But the slimline battery allows for a thinner, lighter phone. And it still stores enough power to keep you going all day without the need to recharge.

Luckily it supports fast charge and with the charger supplied you can restore the battery to 100% within an hour. 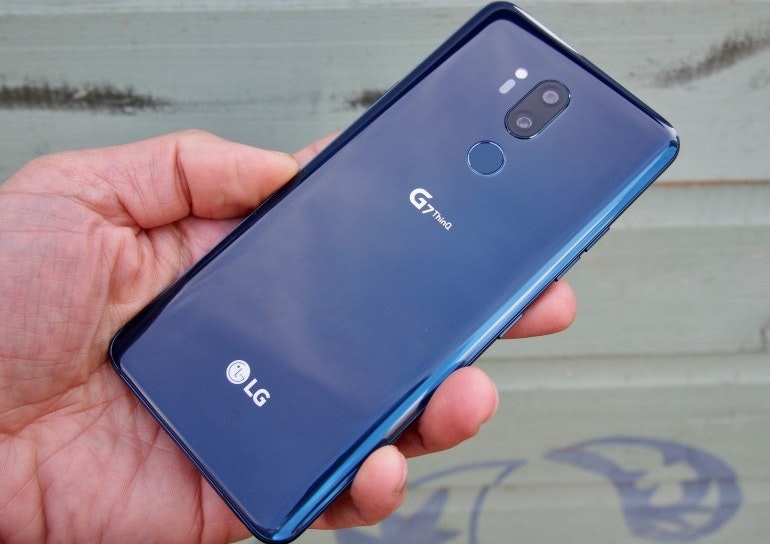 With the G7 Thinq, LG has produced a premium device that delivers all the latest trends in smartphone technology.

The slightly anonymous design certainly may not be exciting but the G7 is undoubtedly a quality device which is a pleasure to hold and use being lighter and thinner than other large screen devices.

Meanwhile, the LG interface is one of the most polished out there. It’s very responsive and can cope well with any task requiring processing power.

Sound performance is also worth a mention. Coupled with a good pair of headphones, the G7 makes for a great device for music lovers thanks to its extensive equalizer and audio settings and even the loudspeaker delivers a surprisingly good sound in the right conditions.

The impressive fast-charging and performance settings go a long way towards mitigating the battery shortcomings and the despite being only an average camera compared to its rivals, the wide angle is a unique feature that can be of great use for some.

At £599 SIM-free, it’s certainly not the cheapest premium phone on the market, but it’s considerably cheaper than the similarly specced Galaxy S9 and Huawei P20 pro.

At the other end of the scale, the OnePlus 6 offers a great package at a much lower price but the screen is nowhere as good and it has a considerably less polished software experience. The LG G7 ThinQ is a great compromise, giving you fantastic quality without a super high price tag.