OnePlus 5T review: challenges iPhone X at half the price 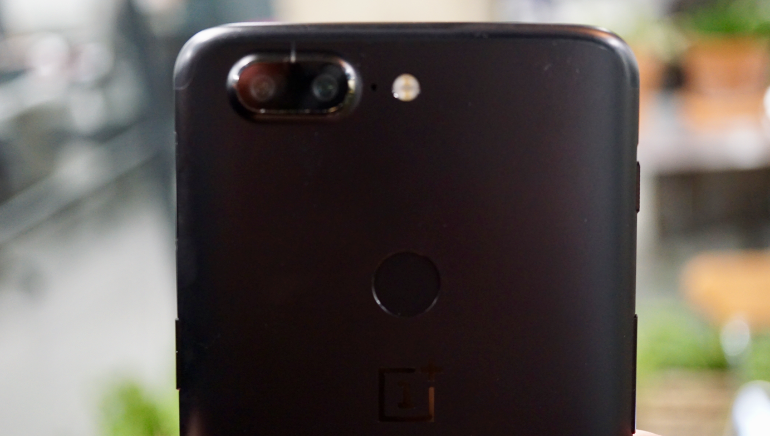 In the wake of the wallet-sapping Samsung Galaxy Note 8 and iPhone X, it seemed that from hereon in phones with high-end features are going to get more expensive.

The OnePlus 5T is here to dispel that notion. Pull it from its box, turn it on and it’s impossible to not be bowled over.

This is a handset that offers the kind of functionality found on much more expensive phones at a very attractive starting price of £449 SIM–free.

The design feels extremely high–end and the 5T sits solidly and comfortably in the hand.

OnePlus's decision to relocate the fingerprint scanner at the rear of the phone means that compared with its predecessor the OnePlus 5, the 5T looks a lot more like the aforementioned Samsung and Apple phones too.

The screen dominates the front of the device, with little room for bezels (those are the edges that surround the display), which is just how we like it.

Play around with the OnePlus 5T and you’ll find so much to be impressed with.

And there’s battery life that will see you through a day of heavy web browsing, video watching and general smartphone usage.

Put simply, this is a phone that’s very easy to love from the moment you first use it.

The most notable change between the OnePlus 5 and the OnePlus 5T is the screen. At 6.1–inches, it’s much larger than the 5.5–inch effort found on its predecessor.

However, thanks to the decision to place the fingerprint scanner on the rear of the handset, the footprint of the device is barely any different. Think: an extra millimetre's width and two millimetres height.

The result is a display that dominates the front of the handset and a phone that's great for watching video on the go.

There will be those that quibble, as OnePlus has stuck with a 1080 x 1920 resolution, albeit using AMOLED technology.

That means that it doesn’t quite match the eye-popping detail and definition of the Galaxy Note 8 and iPhone X. But then considering it’s half the price of those phones, that's understandable.

In truth, when used day to day it’s hardly noticeable. We watched Ken Burns’ Vietnam War documentary series on BBC iPlayer and found the playback to be rich and detailed.

Netflix looks and works like a dream too. Only the fussiest of tech fans would complain.

If playing music out loud is your thing, you may be disappointed there’s no stereo speaker set-up.

But for us that’s no problem. After all, it’s easy enough to pair the device with a Bluetooth speaker to get fuller sounding audio.

Music played out loud from the 5T sounded fine when we played 6music through it, but it’s not an experience you’d want to have on a day-to-day basis when a pairing speaker is available.

The lack of a capable speaker, though, is more than made up for with the inclusion of a 3.5mm headphone jack.

This analogue technology is slowly being squeezed out of existence by the likes of Apple and Google, who are keen to sell us their proprietary wireless headphones at a mark-up.

For us, wired headphones still deliver the best sound and the fact that most people still use them means there’s plenty of life in them yet.

Proof positive is that the sound of complimentary headphones that come with the OnePlus 5T is full of rich tones and deep bass. 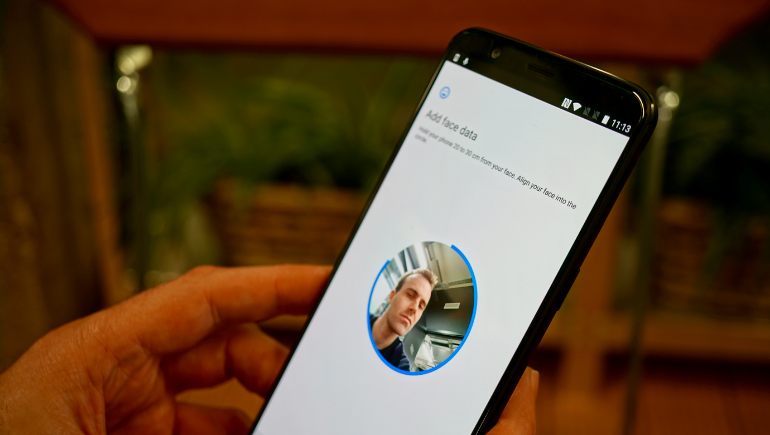 One of biggest differences between the OnePlus 5 and OnePlus 5T is the way the fingerprint scanner works.

The principle remains the same, but the set-up is different. This time around OnePlus has placed the scanner on the back of the phone, allowing for a cleaner, all screen design.

Set-up is quick and easy, with prompts to enter a pass or swipe code in case the scan doesn’t register or someone attempts to access your device.

Once up and running, it opens the phone in a split second. And the scanner's positioning on the back of the phone well below the camera ensures it’s within easy reach.

There are added gestures too. You can now swipe down the scanner to see notifications.

Or you as can tweak the settings to allow the fingerprint scanner to act as the camera button when held on a long press.

The inclusion of facial recognition is a bonus. While it doesn’t quite match up to Apple’s Face ID, Face Unlock is a doddle to set up and works effectively.

It only takes 30 seconds for the front–facing camera to scan your face when first turned on via the Settings app.

Using 100 different identifiers, it then allows you to open the phone from the lock screen with just a glance.

Unlike using the fingerprint scanner, you’ll need to have the lock screen open by either tapping on the display or power button on the side of the handset.

We found it worked very well, although as it can only unlock the phone, it did feel somewhat lacking next to the wide-ranging mastery of Face ID on the iPhone X.

Dual cameras have become de rigueur for top–end smartphones in 2017. And the OnePlus 5T is no different.

The main camera offers a refined take on the dual set-up found on the OnePlus 5, again with 16-megapixel and 20-megapixel sensors.

However, the latter is no longer a telephoto lens, but a standard lens with a wider f/1.7 aperture, aimed at bolstering low light performance.

Throw in OnePlus’s Intelligent Pixel Tech, with four megapixels in one, and you’ll find the camera works impressively in dark conditions.

OnePlus has already started rolling out a software update to improve this feature, after some users complained of less than perfect pictures.

But we found that snaps taken outside after dark, or inside without lights on, were as sharp and detailed as could be expected and much better than those from the older OnePlus 5.

Using the camera one–handed is a breeze, with an on-screen shutter supplemented by being able to use the volume keys or rear fingerprint scanner to take shots. 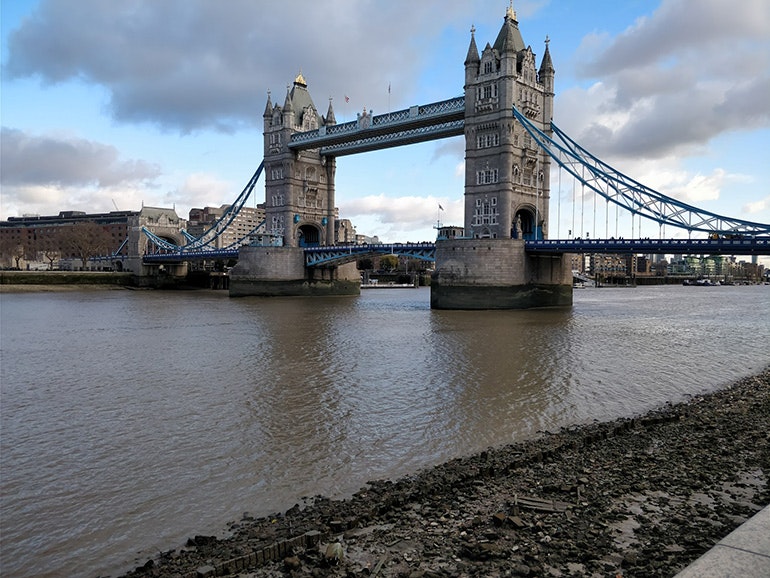 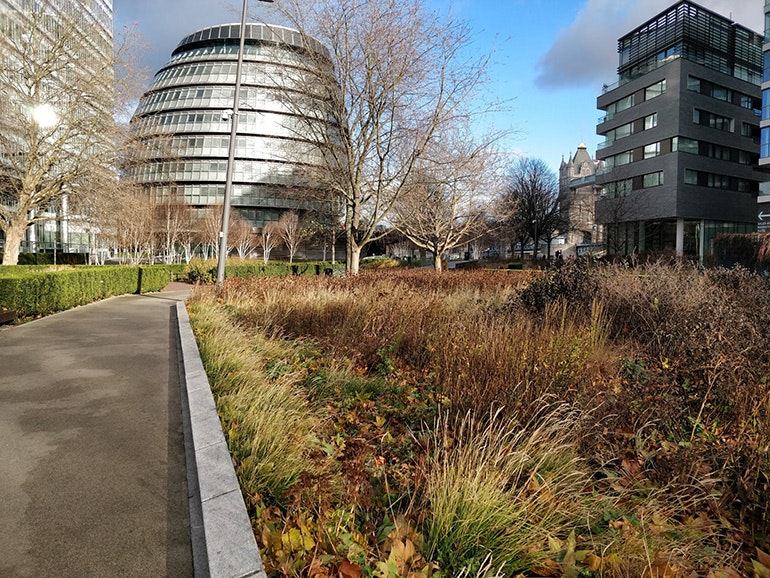 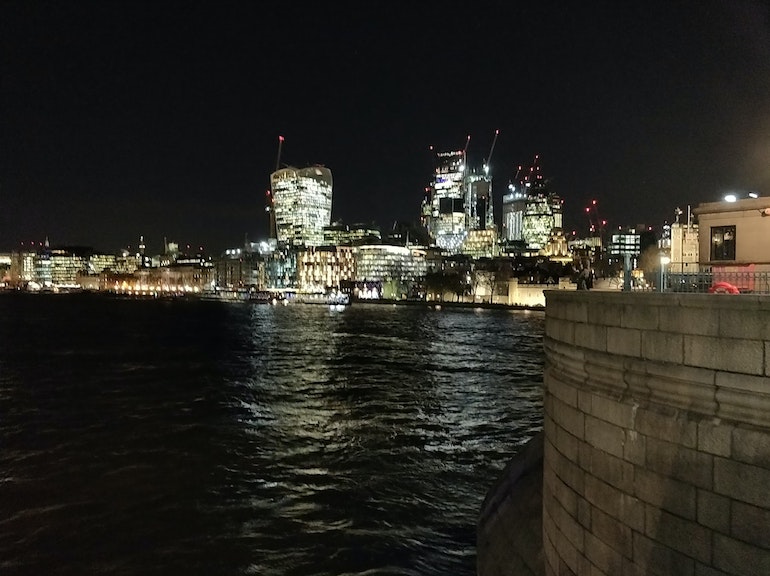 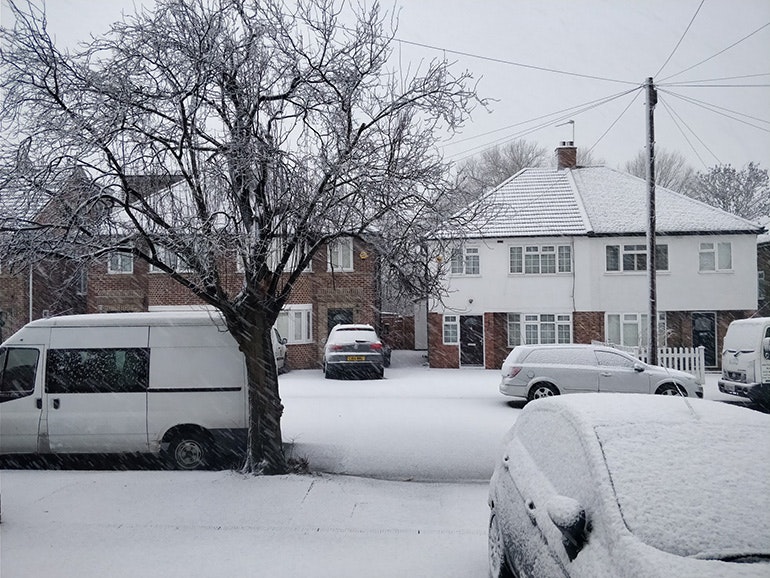 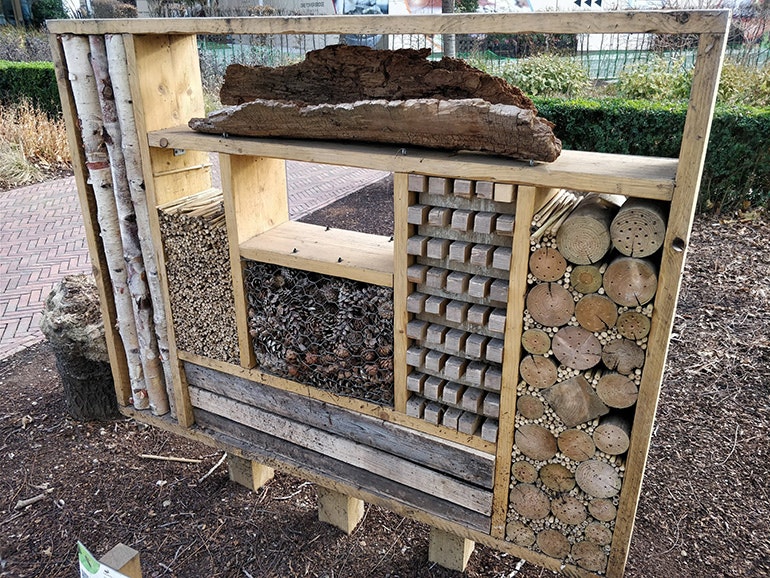 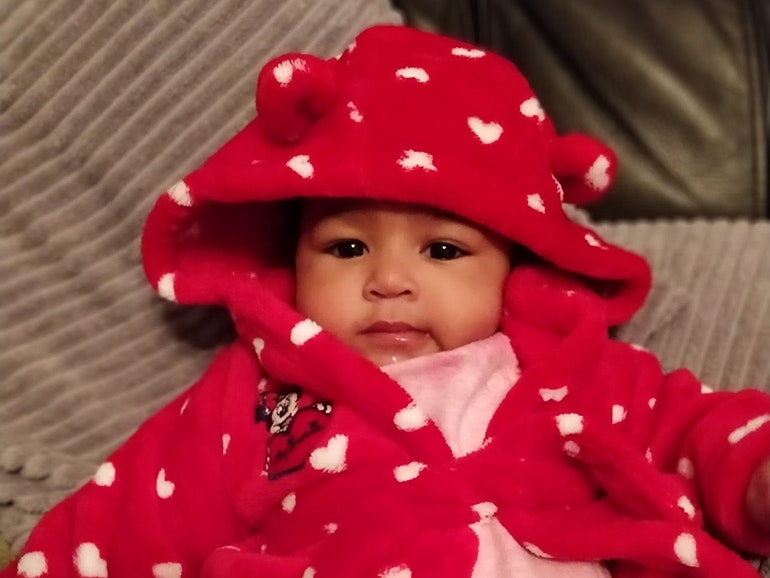 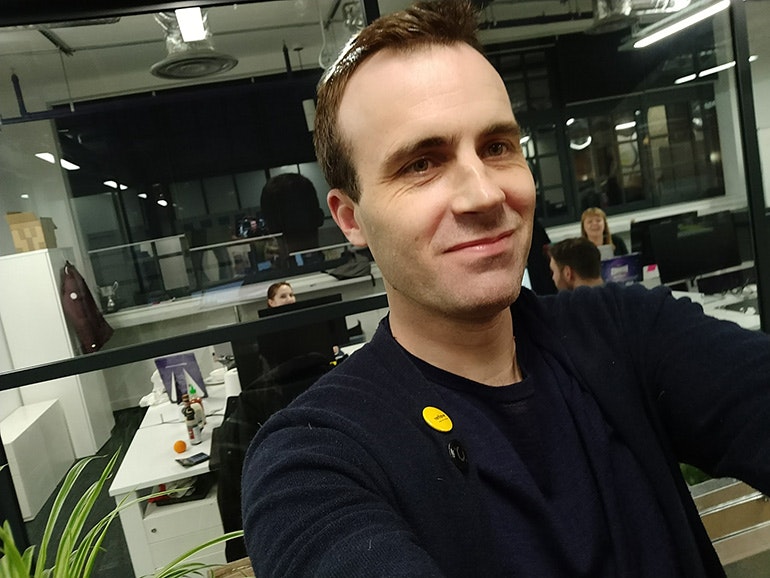 Flicking between standard mode, video and Portrait Mode is as easy as swiping across on the phone’s display, while we found having the ability to tweak aspect ratios, flash settings and HDR at the top of the screen particularly helpful.

A simple swipe up reveals Pro Mode, time lapse and panorama functions, and in general these gesture controls make the camera much easier to use than on previous OnePlus devices.

The selfie camera, at 16 megapixels, is the same as that on the OnePlus and delivers sharp shots, with the screen acting as a flash when conditions aren’t bright enough.

While it doesn’t quite match up to the likes of Samsung’s Galaxy Note 8 and Apple’s iPhone X, the camera on the OnePlus 5T is a stellar effort when you consider the device costs £449.

For day to day use, it’s an extremely solid and impressive alternative to its big-name competitors. 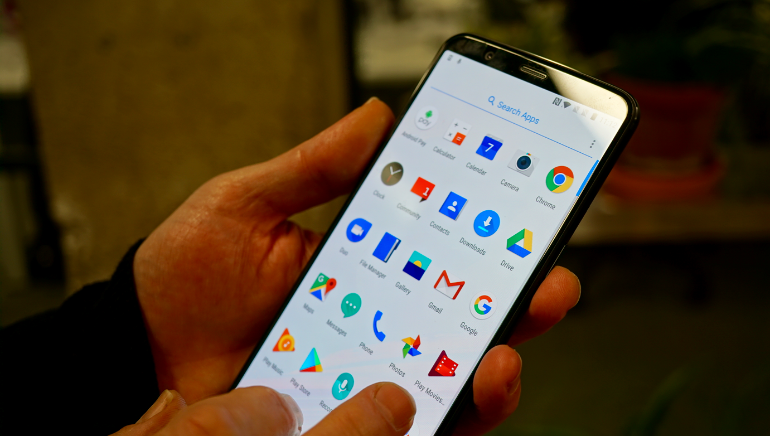 The OnePlus 5T features the same 3,300mAh battery as its predecessor but with a larger screen. Given that large screens are notorious for draining power, that should mean the battery doesn't last as long.

Not so. In fact, the OnePlus 5T performs admirably and lasts a whole day on a single charge.

Of course, that doesn’t make it stand out against the competition, but there are very few phones which can last into a second day without needing to be recharged.

Once again, OnePlus has equipped the 5T with Dash Charge, its fast charging technology, which delivers 60% battery within half an hour when using the bundled charging plug.

This was borne out by our own tests, after letting the battery run down and then powering it up before we had to head out.

Watching HD video and ramping up the brightness didn’t overly affect the battery life either, although as time passes it’s likely the power pack will become less durable, as with all top–end smartphones.

While it’s hard to quibble over the lack of wireless charging the decision to release the 5T with older Android Nougat software, rather than the up-to-minute Android Oreo version, is very disappointing.

Oreo has been out for months now, but OnePlus, like so many others, does not appear interested in offering the newest edition of Android out of the box. When buying a flagship phone, users should get the best OS available.

That said, Nougat remains a decent option, with the hefty 8GB RAM and Snapdragon 835 processor ensuring things work at lightning pace whether browsing the web, scouring social media or flicking through images.

There’s no SD slot. But with 64GB or 128GB of storage available, there’s more than enough space for all your apps, games and downloads.

These key functions help put the 5T well up there with Samsung and Apple’s best devices. 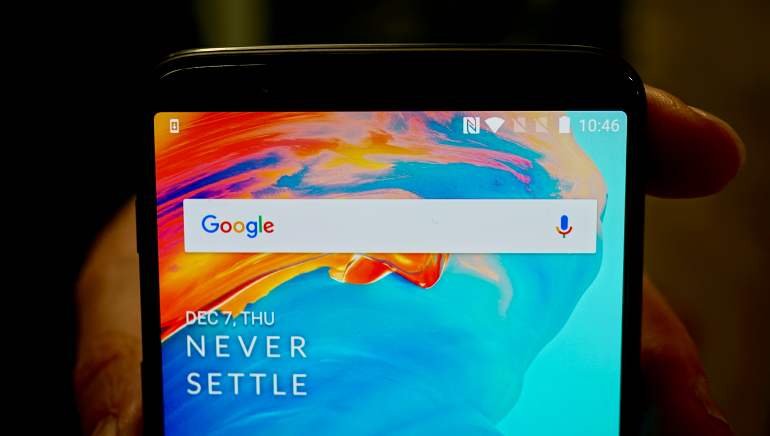 Although the OnePlus 5T’s design feels rock solid in the hand, it doesn’t have an IP rating.

That means it isn’t waterproof or dust-proof, so you’ll need to be extra careful or invest in a case when using it outside.

While plenty of YouTube clips and anecdotal posts on social media suggest the older OnePlus 5 is secretly waterproof, this is still a feature OnePlus doesn’t officially include on the newer 5T’s spec sheet.

It’s disappointing in one sense, although is entirely fair when you consider that a high IP rating drives up the cost of smartphones, meaning the 5T would lose its biggest selling point.

Value for money and verdict

There’s simply no arguing with the price of the OnePlus 5T.

Starting at £449 SIM–free for a 64GB model and rising to £499 for a 128GB model (the one we tested), it's half the price of the iPhone X, and yet still manages to cram in many of the features which make Apple’s best-ever smartphone stand out.

A dual lens camera that delivers good results in low light and has a series of impressive modes, space and storage for thousands of songs, dozens of apps and plenty of video, plus facial scanning security, are usually the domain of far pricier devices.

OnePlus has inevitably had to cut corners to get the price down.

The fact that it's not waterproof and dust-proof is a touch annoying, but if you’re careful or invest in a case, doesn’t need to be a problem.

The failure to include Android Oreo however, despite promises of an update in the New Year, is a big omission, even if Android Nougat is accomplished enough to handle most tasks.

The change in design means that the OnePlus 5T has the look and feel of a much more expensive product. That can only be applauded.

If you want the very best of modern-day smartphones without leaving your bank balance bare, then the OnePlus 5T is the phone for you.

Compare our pick of the best deals for OnePlus phones.

Priced at £329, the latest OnePlus device has a lot to recommend it.