With the Nord N10 5G, OnePlus is doubling-down on its mid-range smartphone strategy. The handset arrives as a follow-up to the original OnePlus Nord, and offers many of the same impressive specs despite its cheaper price tag. The Nord N10 packs find a 6.5-inch, 90Hz LCD display, a quad-camera setup and support for 5G connectivity.

Naturally, some corners were cut to keep the price so low. There’s no wireless charging, 5G is limited, and the phone's frame is made of plastic. OnePlus has also switched out the Qualcomm Snapdragon 765G SoC in favour of the cheaper Snapdragon 690 5G SoC, which delivers only average performance. 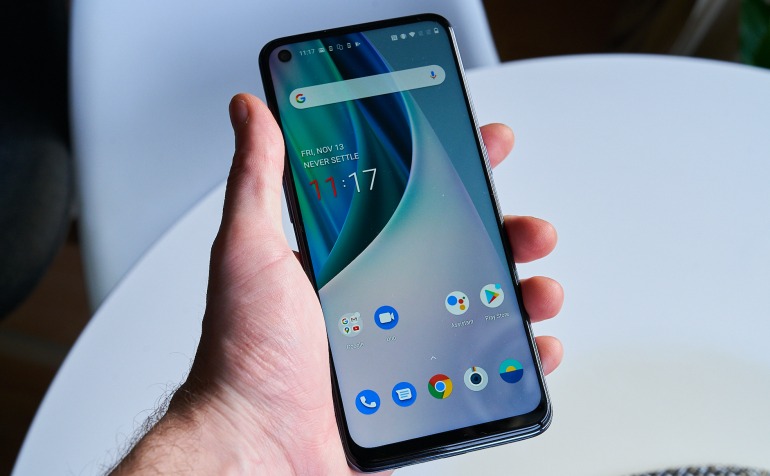 Build quality remains sturdy, but it feels much cheaper than its predecessor.

The OnePlus Nord N10 5G doesn’t feel like your average sub-£400 smartphone, yet nor does it feel as premium as its mid-range predecessor. Although build quality remains sturdy, the handset feels cheaper than the original Nord, despite being crafted from similar materials.

Its polycarbonate frame and plastic rear feel less satisfying than OnePlus’ high-end glass and metal phones. And we also found it more prone to picking up grease and fingerprints.

The N10 5G is also the company’s first phone since the OnePlus 6 to have a rear-mounted capacitive fingerprint sensor. We found this a little more awkward to reach than the under-screen sensor we’ve become accustomed to on OnePlus handsets. But we can’t fault its performance. It worked fast and reliably every time.

The awkward placement of the scanner comes as a result of the size of the handset. With dimensions of 163mm x 74.7mm x 8.95mm, the OnePlus Nord N10 is almost as tall as the OnePlus 8 Pro and marginally wider and chunkier. While this will be a plus for those looking for a big-screened smartphone at a mid-range price, we found it a little too hefty.

Elsewhere on the handset, you’ll find a USB-C port and, surprisingly, a headphone jack mounted on the bottom. While the 3.5mm jack has returned, OnePlus has ditched its alert slider, a trademark feature that’s been found on all OnePlus phones since the OnePlus two. First-time OnePlus smartphone owners won't be too disappointed about this, but we found it made the N10 feel less like a OnePlus device.

Another feature missing is resistance against water. While the OnePlus Nord was “splash proof”, the N10 5G has no water resistance at all. 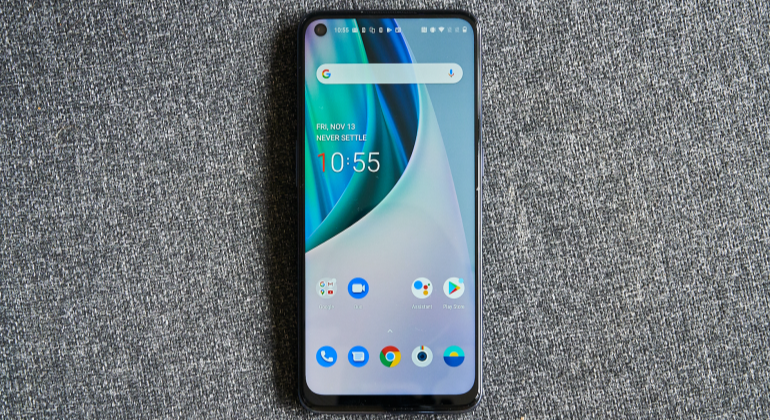 The lack of OLED is all too apparent, but the 6.49-inch panel is silky-smooth.

The OnePlus Nord N10 is the first OnePlus phone since the OnePlus Two to have an LCD display. The handset packs a 6.49-inch panel with a 1080p resolution and 90Hz refresh rate. This means that, while you get the same silky-smooth experience as the original Nord, the display isn’t quite as visually impressive.

We found the lack of OLED very apparent. The Nord N10 lacks the vibrancy and punch that we’ve come to expect from OnePlus handsets, with colours appearing somewhat lacking and washed out in comparison. We also had to switch off the display’s terrible haptic feedback. While this is a feature we usually enjoy, we found the feedback on the Nord N10 too intense and distracting.

Despite these complaints, the display, which also features a sizable chin and punch-hole cutout, is perfectly good enough for a handset that costs just £329. And its impressive brightness levels are comparable with those you’d find on a much more expensive device. 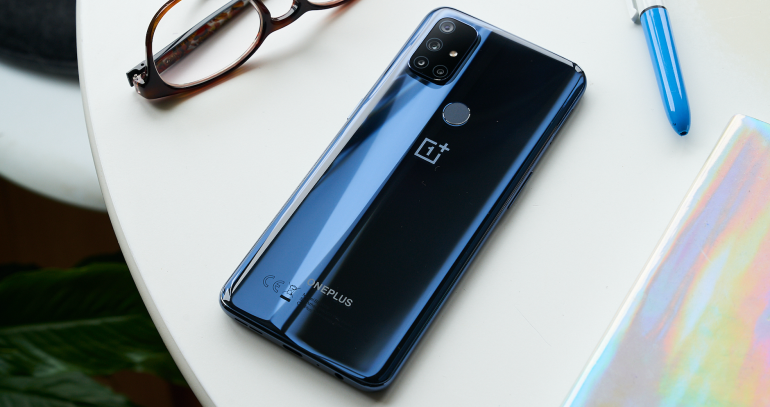 OnePlus continues to load up its handsets with unnecessary sensors.

Despite cutting corners elsewhere, OnePlus has equipped the Nord N10 with a huge array of cameras. You’ll find a 64MP primary lens, an 8MP ultra-wide lens, a 2MP macro lens and a 2MP monochrome lens.

The first two, the primary and ultra-wide-lenses, are impressive, particularly for a handset at this price point. These cameras take detailed, colourful images, and the 119-degree ultra-wide sensor is one of the better ultrawide angle lenses the company has featured in one of its smartphones. On top of that, OnePlus’ camera app is perfectly simple to use, despite boasting a number of useful modes such as ‘Nightscape’ and ‘Portrait’.

However, we found the monochrome and macro cameras somewhat unnecessary, and it’s rare that these sensors will ever get used. The former is only useful when you want to take black-and-white photos, and we remain unconvinced it produces better results than simply adding a filter.

The latter produced images that were noisy and lacking in detail, and we got better results by zooming using the main camera lens. We feel like the only reason these sensors exist is so that OnePlus can boast that the Nord N10 has a quad-camera setup.

The Snapdragon 690 processor can struggle, but battery life is excellent.

Under the hood, the OnePlus Nord 10 5G packs a Qualcomm Snapdragon 960 processor, paired with 6GB RAM and 128GB storage that can be expanded via microSD. While the addition of expandable storage is a welcome one, we found the Qualcomm chip fell well behind the original Nord’s Snapdragon 765G in terms of overall power.

In normal use, the performance was fine, with the Nord N10 quickly loading apps and even managing to handle Mario Kart Tour without any issues. However, we ran into performance issues on a number of occasions, particularly when loading graphics-heavy websites. The Nord N10 froze on a number of occasions when we tried to watch video content using the built-in browser.

It’s not all bad news, however, as the Snapdragon 690 is Qualcomm’s first 600-series chip to support 5G. There is some fine print, however, as the Nord N10 5G only supports the slower sub-6Ghz 5G, rather than the faster mmWave standard. Despite this, support for 5G speeds is a nice feature to have on a smartphone at this price.

On the software side, the OnePlus Nord N10 runs OnePlus’ Android 10-based OxygenOS 10.5, rather than the latest Android 11-based OxygenOS 11. This seems an odd decision, as the original Nord, which is only £50 more expensive than the Nord N10, shipped with the latter out of the box. OnePlus has also announced that the Nord N10 will only get a single version update to the new Android 11 release, though it’s promising release two years of software updates.

Though not the latest and greatest version, OnePlus’ OxygenOS 10.5 does include some nice features and is as close to stock Android as you’ll find on a mid-range handset. For example, OxygenOS 10.5 includes Fnastic mode for optimised gaming, built-in screen recording, and a gestures system that lets you take screenshots with a three-finger swipe or open controls when the screen is turned off.

One area where the Nord N10’s performance impressed was in the battery life department. The handset’s 4,300mAh battery is excellent, particularly for a sub-£400 device. We found it easily lasted a full day, and often had enough juice left in the morning to wake us up with an alarm.

The Nord N10 boasts OnePlus’ Warp Charge 40 technology too, which means that after just 15 minutes plugged in, you’ll get about 40% battery. And the handset will re-juice to full in less than an hour. Unfortunately, there’s no wireless charging. But OnePlus has included its optimised charging feature, which limits how long your phone is charging in order to preserve the longevity of the battery. 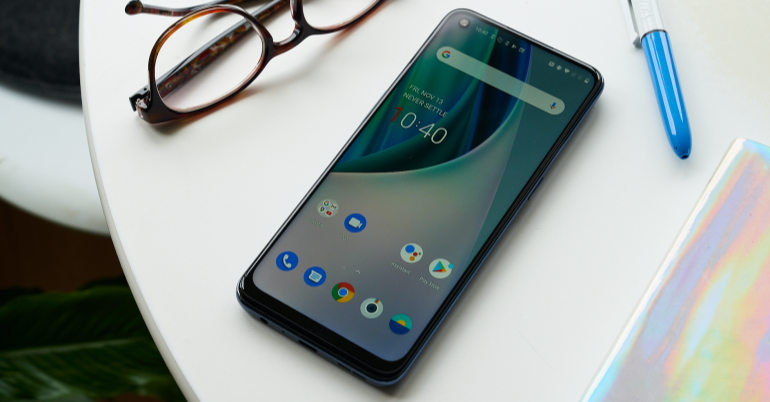 However, it’s clear that OnePlus has cut a number of corners in order to keep the price so low. The handset feels disappointingly cheap in hand, the lack of OLED is all too noticeable. And although it brings 5G support to the device, the Snapdragon 690 processor failed to deliver the level of performance that we’ve come to expect from OnePlus devices.

It’s also disappointing that OnePlus has decided to ship the Nord N10 with Android 10. The Nord, despite also arriving as a mid-range smartphone, shipped with the latest version of Google’s OS out of the box.

With that in mind, it’s difficult to recommend the OnePlus Nord N10 over its predecessor, which costs just £50 more at £379. In our opinion, it’s worth spending the extra £50 to enjoy the faster performance and more premium design it offers.