The Oppo RX17 Pro is the first ever phone produced by the high-end Chinese brand to hit the UK market. 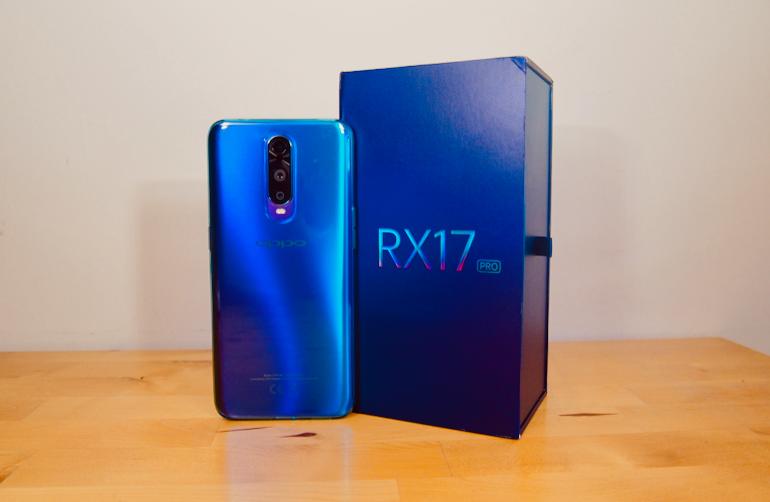 The layered glass back is sure to draw attention, especially in the two-tone pink and blue of the “Radiant Mist” version. It's less showy compared to the wild iridescent shades seen on the Honor or Honor, but it comes alive as it catches the light with an S shaped swirl appearing across the surface.

Everything about the Oppo feels high quality, even the translucent case included in the box. It feels thicker and more rigid compared to the flimsy TPU cases that come with many of the latest phones. It fits snugly around the curved sides of the RX17. And once it’s on, it does a great job of protecting the device without compromising the elegant design.

It measures 6.5-inches, making this a large phone by any standard. But the AMOLED display doesn’t require a thick frame so it covers almost 87% of the front surface. Coupled with the curved back and good weight distribution, the Oppo RX 17 never feels too unwieldy.

Unlike many of its best competitors, the buttons on the RX 17 are split, power button on the right and volume rocker on the left of the screen.

Both the display and the back of the phone are made of Corning Gorilla Glass 6. This is the latest version of the industry-leading tough glass technology and guarantees high resistance to knocks and scratches. 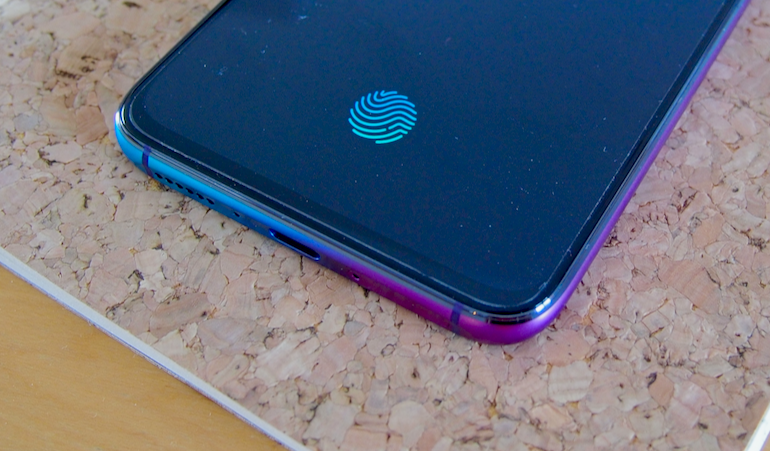 Oppo has also embraced the innovative on-screen fingerprint sensor. It's not as fast as the traditional fingerprint pad but a perfectly good way to unlock the phone when coupled with face recognition.

The layered glass construction at the back make it quite eye catching, especially in the blue/pink two tone effect of the “Radiant Mist” version.

The screen is a 6.4-inch AMOLED display, identical in resolution and pixel density to the one found on the OnePlus 6T. Not the sharpest AMOLED in the market but the 1080x2340 resolution places between the similarly priced Honor View 20 and the sharper Nokia 9 Pureview.

You’re unlikely to see any difference in resolution between these devices without a magnifying glass though so don’t let this put you off what is an excellent screen for the money. 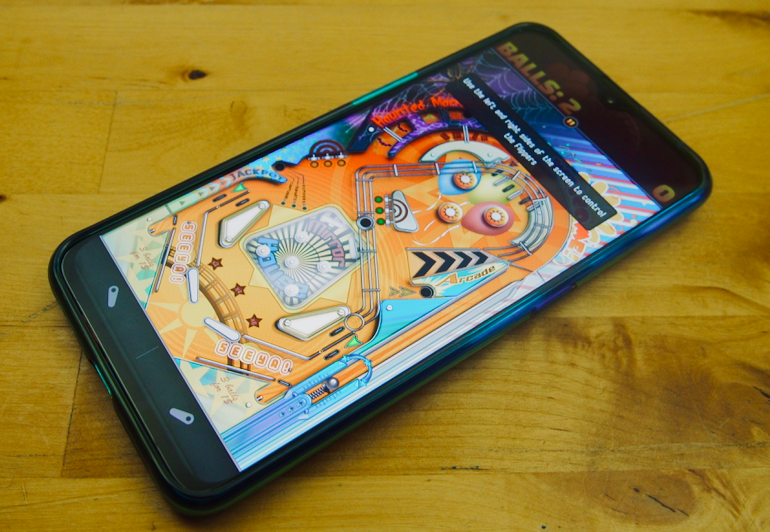 We've found the screen brightness more than adequate in most conditions.And unless you’re using it outdoors on a sunny day, you’ll find that setting it at about the halfway mark will give you plenty of brightness.

As notches go, the little teardrop located at the top of the RX17 is fairly unobtrusive. In fact, it's barely bigger than the camera lens it contains and only rarely can be in the way and ruin your gaming or video experience.

If that's the case, the notched area can be blanked in the display setting. Here we find one of the little gems of the Oppo system, rather than a system-wide on/off switch, the notch can be toggled only for specific apps. 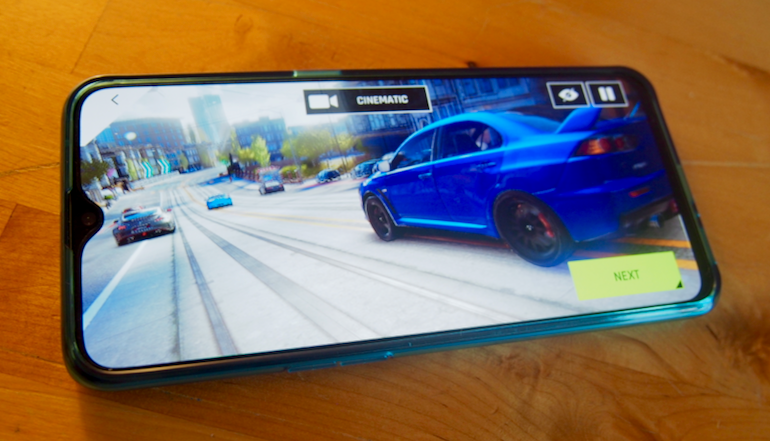 Games will work around the small notch. If it gets annoying, you can obscure the whole area. Unlike many “notched” devices, Oppo has implemented a practical way to disable it only for the apps you choose.

The RX17 Pro doesn’t come with a headphone jack. Instead, the reversible USB-C charging port doubles as an audio jack when using the surprisingly good earphones included. There's no adaptor included in the box so unless you own a Bluetooth wireless headset, you’ll need one of these to connect your traditional 2.5mm headphones. 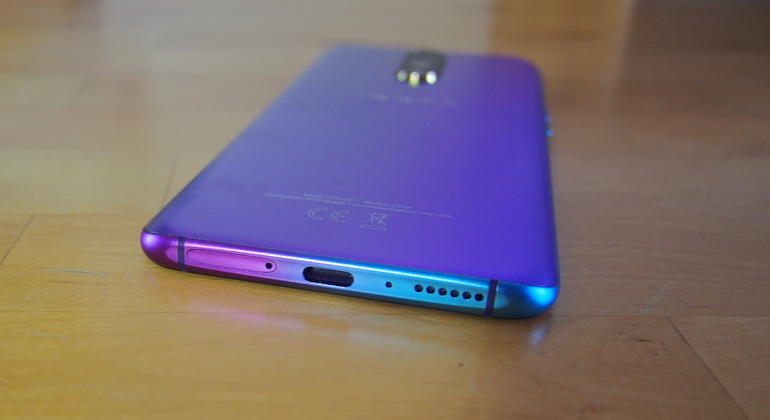 A sunken area in the design of the bottom hosts the reversible USB-C charger which doubles as an audio jack, the speaker and, unusually, the SIM drawer. The little speaker is not to be underestimated. Unlike with many mid-range phones, the Oppo RX17 Pro delivers a more detailed sound that we are used to see on phone of this price range.

Sound from the main speaker was surprisingly good. While we don’t usually pay too much attention to sound quality given that very few phones go above mediocre, the RX17 Pro manages to stand out from the crowd with relatively deep and detailed sound coming from the single speaker at the bottom.

You’ll find three camera lenses on the back of the Oppo RX17 Pro. The main camera has a 12MP with a variable aperture lens.

The camera is designed to adjust the exposure between f/2.4 and f/1.5 as the light changes.

It does an excellent job at choosing the right lens aperture depending on the amount of light, and I never found the need to use the exposure slider.

This is probably for the best as the control requires you to tap then drag a tiny icon up or down to adjust the exposure. 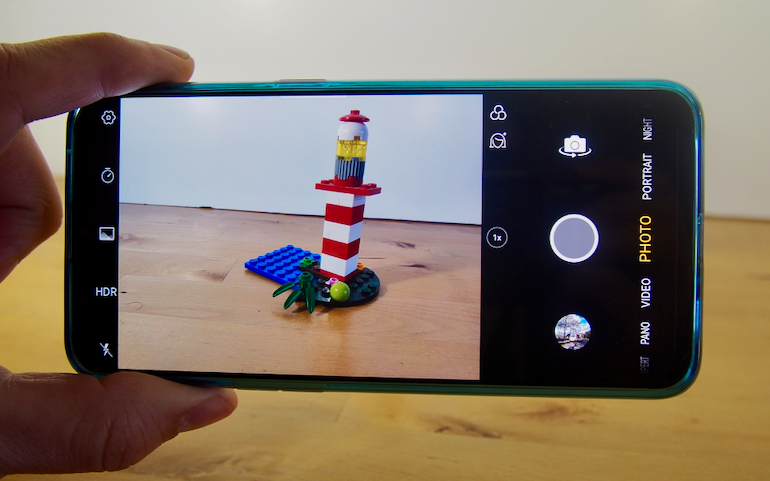 Different shooting modes can be accessed by swiping but the switching can appear laggy. 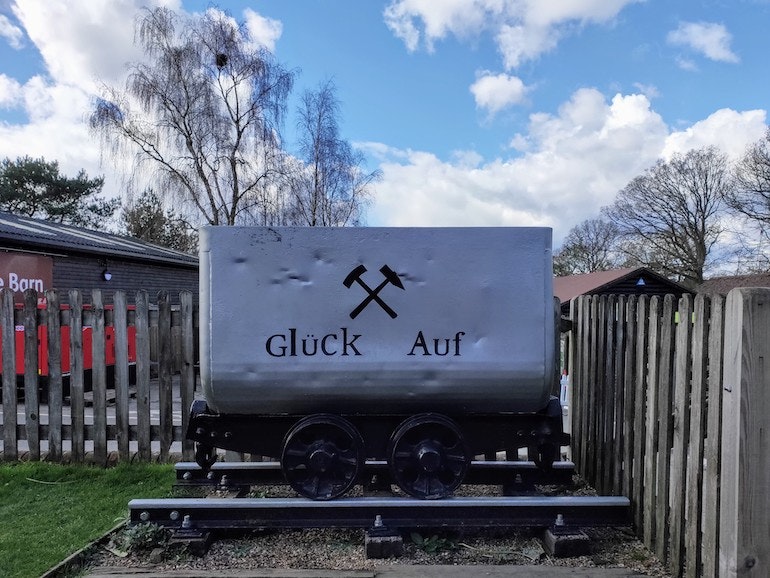 Good picture overall but despite being a well-lit scene, the darker areas lose most of the detail.

The third lens is a 3D camera that's designed to measure the distance between objects in a scene. The main application is augmented reality, used to add animated characters to your pictures or make your subject look like they're wearing a virtual rabbit mask. 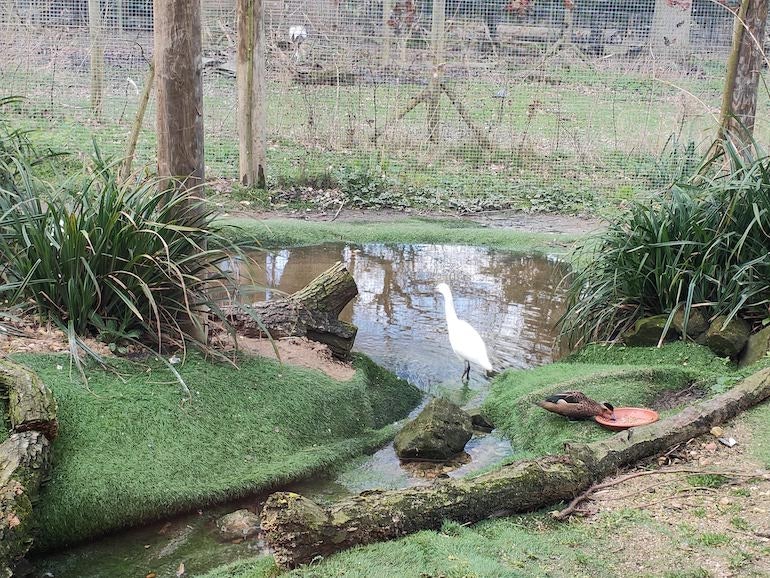 This is a tricky shot with a lot of light, but the Oppo handles it well.

We tried the RX17 in a variety of conditions and we found that colours are realistic and appear natural. There's none of the over-saturation seen in some phones that overdo the processing to make your picture pop more but gives somewhat artificial effect.

Oppo’s marketing material points at low-light performance as one of the strongest points and with good reason. Apart from the ability to switch between the f/1.5 and f/2.4 aperture levels, the device is also capable of seriously good night shots thanks to “Night”. This feature simulates a long-exposure by taking multiple shots while you keep the phone steady.

While this sounds like the perfect recipe for blurred pictures even with steady hands, the Optical Image Stabilisation is useful in avoiding any motion blur and results are pretty great. 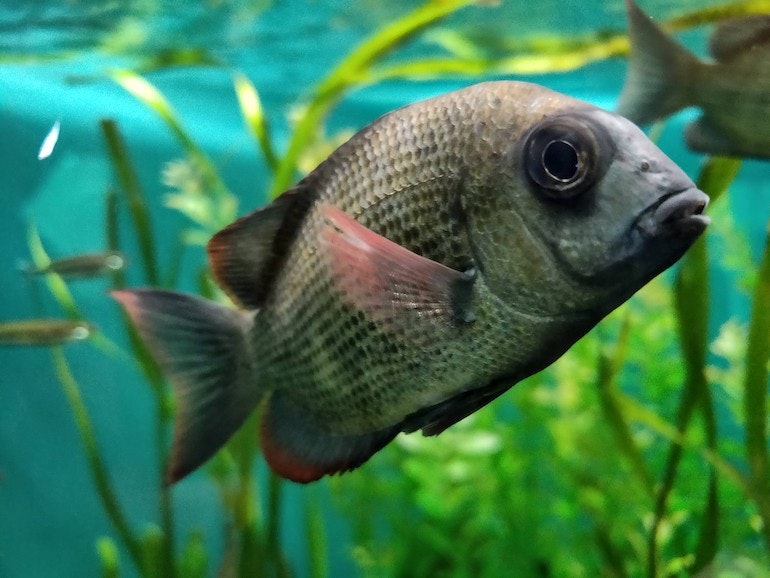 Portrait mode is suitable even for non-air breathing pets. An inquisitive fish struck a good pose so that I could capture its best side. 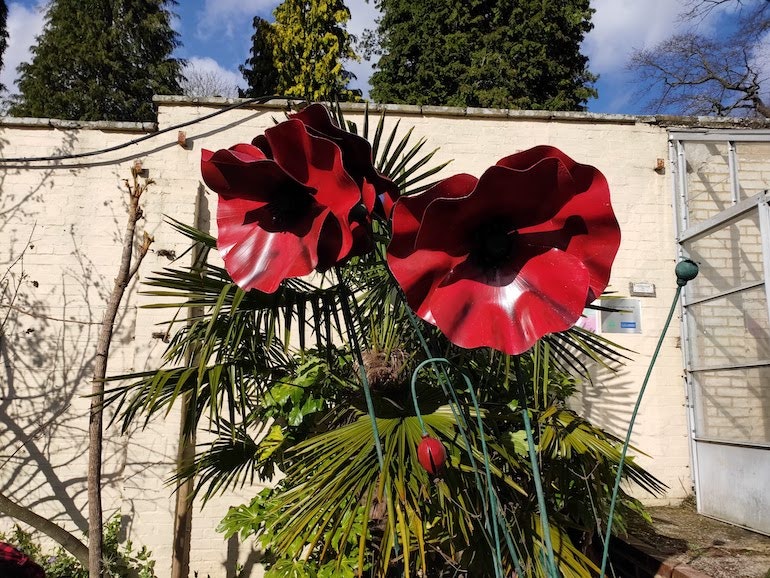 Another case where dynamic range is pushed to its limits. Bright sunny spots with visible detail but overly dark in the centre of the poppies.

The selfie camera, a 25MP with pixel-binning technology, is a generally good performer. Pixel binning compromises resolution for increased brightness, and it’s a good solution for selfies where getting the amount of light right can be tricky.

The Portrait mode works well but may struggle with stray hair and clothes so use with caution. There is also an AI-powered beauty mode that makes you look rather better than your best, even when you're not feeling it. 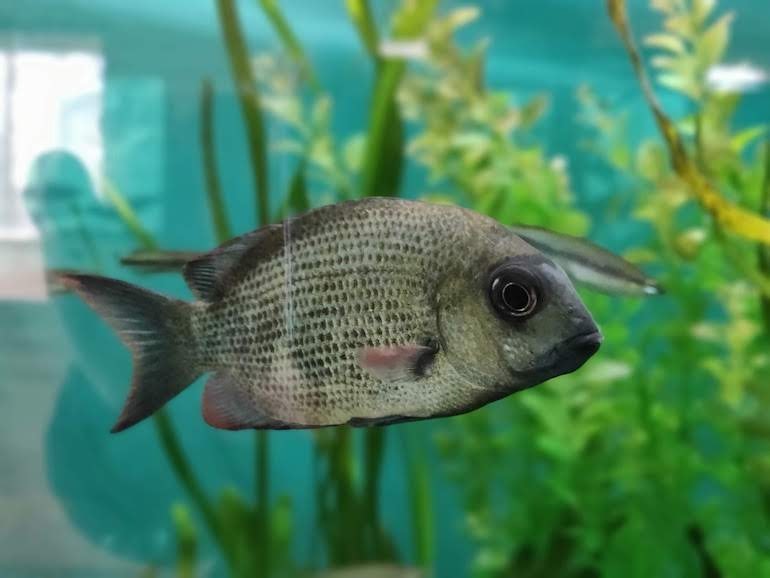 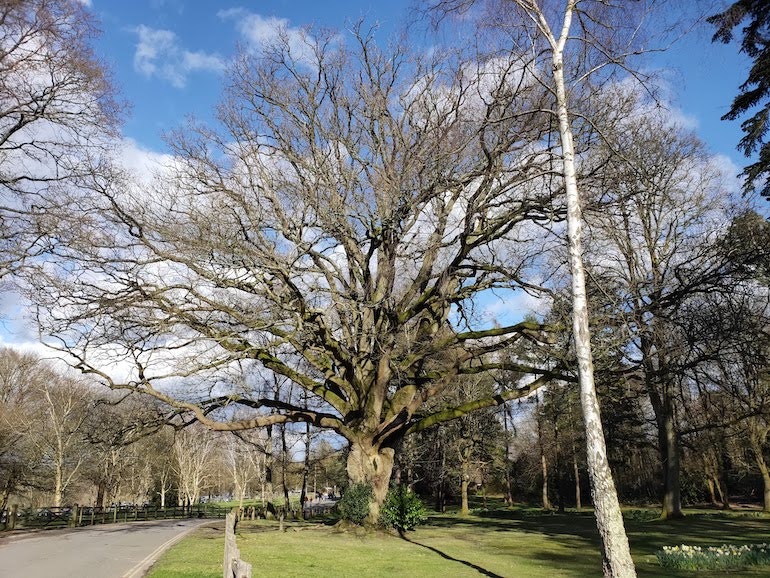 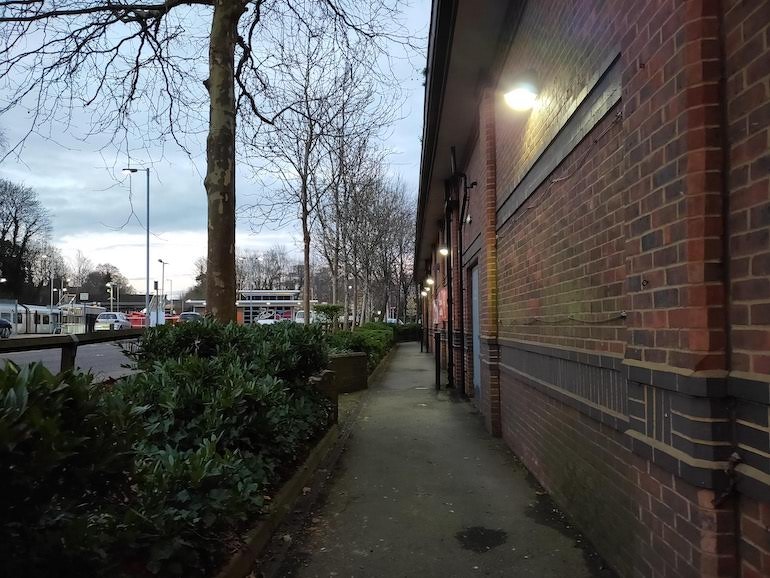 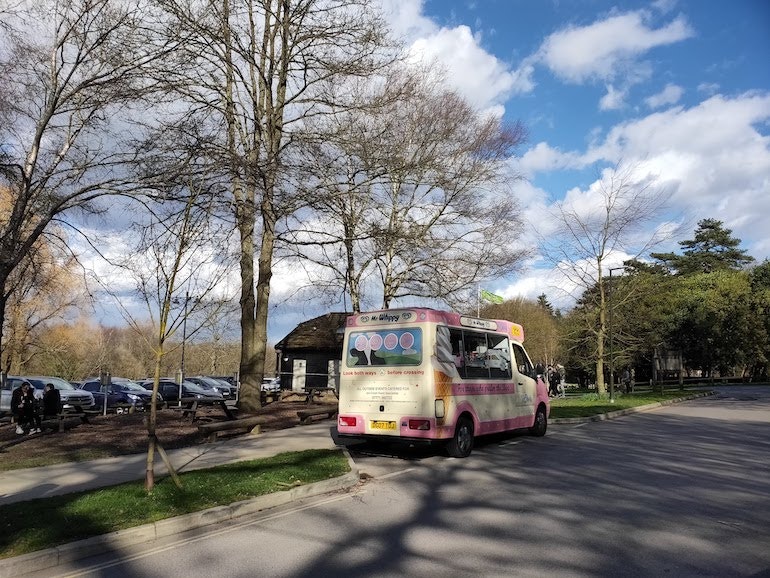 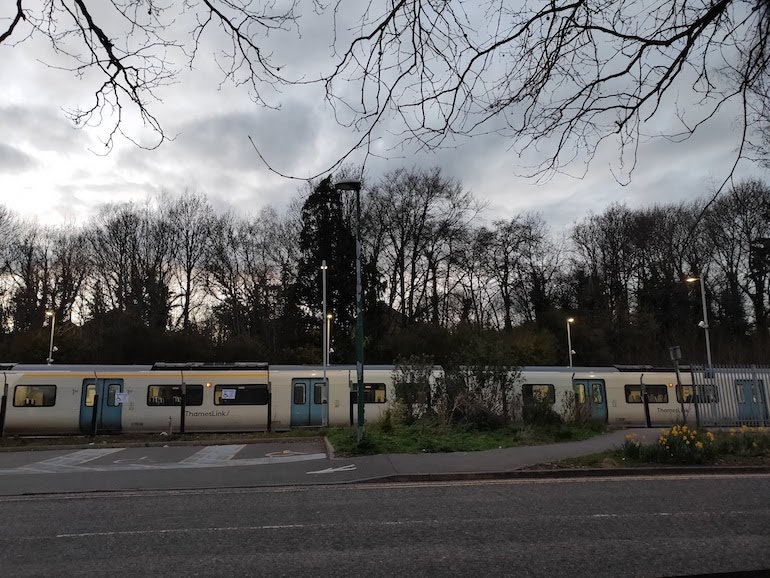 The Oppo RX17 Pro is fitted with the Snapdragon 710 processor, a low powered CPU that lags behind the best offerings in the mid-range market like the Nokia 9 PureView and OnePlus 6T.

But don’t let this put you off. Thanks to its generous amount of working memory, 6GB, and optimised Android skin, everyday performance is fast and smooth. Both face unlocking and on-screen fingerprint sensor work well, switching between apps are extremely quick, and you’ll find no lag when scrolling through large web pages. 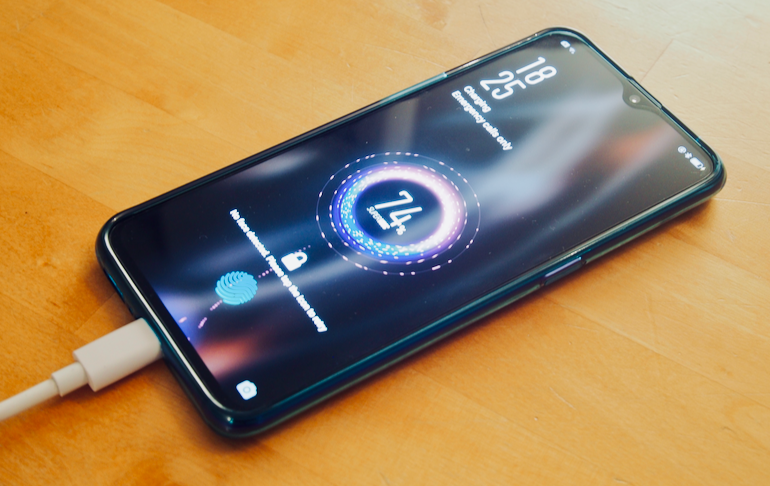 A funky animation comes up when connecting the superfast charger. The Oppo RX17 Pro holds the record as the fastest charging phone you can buy.

The innovative on-screen fingerprint was a breeze to enable also thanks to the well-designed setup process. Instead of the frustrating “press harder” or “move the finger about” messages we often see, Oppo goes for a step-by-step approach that guides you smoothly through the process that gives you the impression you are doing everything right.

Face unlocking was similarly effortless. It took the whole of about three seconds to register my face and once in the system, it worked every time, provided there was enough light.

The attention to detail seen on the Oppo Color OS is not limited to biometric settings. It may not have a wealth of utilities seen on Huawei or Samsung phones and there's no AI-powered smart battery software, all preferences are easy to find and understand.

The “Smart & Convenient” preference panel, for instance, contains miscellaneous features like the ability to replace the navigation buttons, with on-screen swipe gestures. And navigation bar that can provide shortcuts to the camera and favourite app that can be accessed by swiping the edge of the screen. 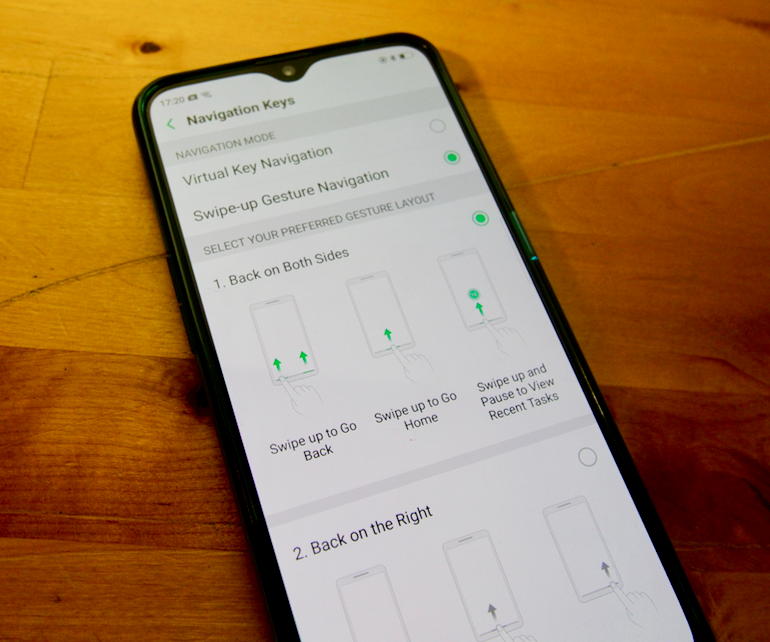 Gestures settings are nothing new but the Oppo Colour OS makes setting up the device to suit your preference really easy thanks to well laid out and clearly explained options.

The phone does not run the latest version of Google’s Android operating system which as of March 2019 is Android 9 Pie with its more sophisticated AI capabilities. Instead, Oppo has released the RX17 Pro with the previous version, Android 8 Oreo. No indication has been given on the timing of an upgrade.

The RX17 Pro is a good, solid performer and it delivers around two days' of light use with a single charge. Things may differ significantly when playing demanding games or using mobile data for long periods.

Despite the battery being slightly smaller than the one seen on the Honor View 20, you have no reason to worry about running out of juice because the RX17 Pro has one feature that makes it stand out and not just above mid-range competitors but any phone on the market: the fastest charging we’ve ever seen on any phone so far.

While some of the best currently manage to deliver around 40% in half an hour of charging, the RX17 Pro sets a new record by reaching to charge up to about 40% in 10 minutes.

The Oppo RX17 Pro is a welcome new entry in the “affordable premium” phone market. While it may be new to the UK, Oppo is a brand that has been incredibly successful in other markets for a few years now.

Technology enthusiasts have associated this brand with bold designs and very high specs. For the first official foray in the UK market, however, the Chinese manufacturer has played it safe.

The RX17 Pro, while beautifully designed, brings little innovation and its specs are similar but a notch below the ones found in the OnePlus 6T (Oppo and OnePlus share the same parent company as well as many of their proprietary technologies).

The RX17 Pro has some great qualities that help it stand out from the crowd. For example, its fast charging really is the fastest around. The technology that has contributed the most to make battery anxiety a thing of the past has been pushed to a new limit in the RX17Pro. It is astonishingly speedy. If you've forgotten to plug it in the night before, no need to panic. As long as you use the Oppo charger, you'll have enough juice by the time you've finished your breakfast.

Oppo's Android skin is also worth mentioning and one of the main differentiators with the OnePlus 6T. It may not appeal to tech-enthusiast but it's easy to use, well designed and, most of all, it makes efficient use of the available resources.

These standout features alone are enough for us to recommend the RX17 Pro over most of its competitors.

Amazing cameras at a great price.

Should be announced tomorrow.