Sony makes its return courtesy of the Xperia 5 III. The new handset isn’t exactly the company’s flagship, a title reserved for the Xperia 1 III, but priced at £899 the Xperia 5 III strikes a balance between premium and affordability.

Sony offers a good-looking screen and a camera app meant for experienced users, but the question is, with a few handy tweaks to the formula, can the sequel measure up to its predecessor? Is it time for you to upgrade to the next generation? 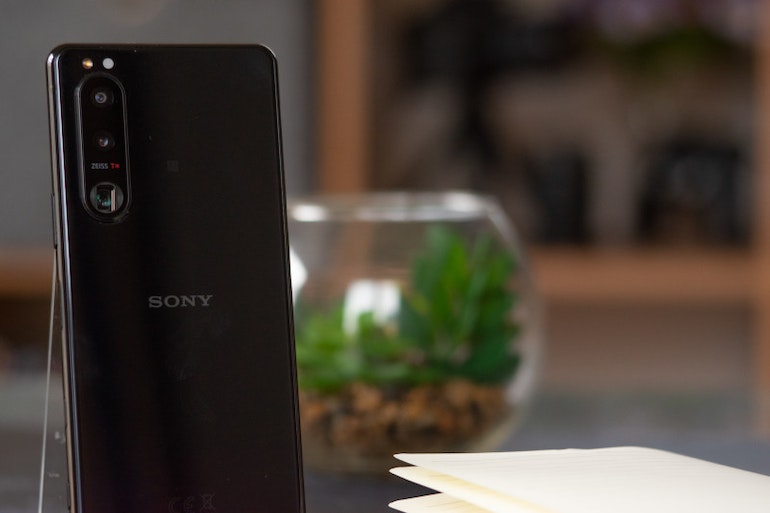 When you first see the Xperia 5 III you would be forgiven for mistaking the phone for last year’s addition. The back retains its smart yet simple glass back. The 6.1-inch display is protected by Gorilla Glass to add an extra sense of durability and give you a degree of drop resistance.

The three-camera setup sits neatly on the right-hand side of the body and the design is eye-catching and meshes well with the back’s look.

The phone feels smooth to the touch and light in the palm. Yes, the device is made of metal and glass, but you should find it easy to hold, however, you might find that it’s back makes it a little bit slippery at times. All the buttons sit on the right-hand side of the phone’s frame. The volume rocker is at the head of the foursome, and the power button is tucked in the middle. Further down Google Assistant and the camera have their own dedicated buttons.

The screen on button doubles as the fingerprint scanner. Disappointingly, Sony still hasn’t found a way to make the button a bit bulkier and easier to find.

When we first unboxed the phone, we mistakenly tried to power on with the most prominent switch, the volume rocker.

Given the sensitive nature of the fingerprint scanner, it is understandable that the makers haven’t prioritised making it tactile. The same excuse cannot be given for the Google Assistant switch. You can miss it, even while knowing it’s there.

In a move that makes it stand out from most other newly released smartphones, Sony retains a 3.5 headphone jack, on the top left of the phone. 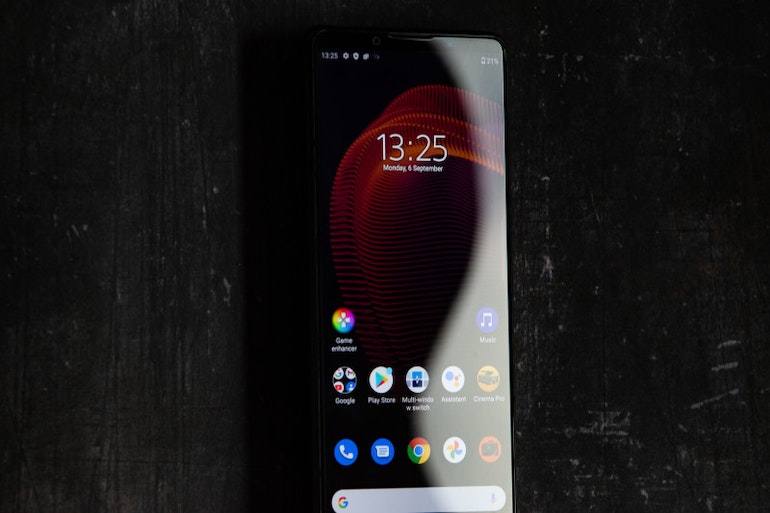 The Sony Xperia 5 III features the same Full HD+ screen as the previous model, the Xperia 5 II. The 6.1-inch display will be an enjoyable experience when watching movies or gaming. Colours look accurate and faces are sharp, and Dolby Atmos makes everything sound crystal clear.

Looking at your emails or completing indoor work tasks will also be a breeze with a bright screen, however, the sunlight did make it more difficult to see what was going on when we took it outside.

Sony provides settings to alter image quality to your liking with a creator mode that’s intended to allow you to see media as the director intended. And you can further tweak your viewing experience, by adjusting the white balance.

There wasn’t a huge amount of difference between the Standard mode and the Creator mode, but we were very satisfied by the viewing experience.

The display is a strong performer that is equipped with the smoother 120Hz refresh rate. Unfortunately, you can only choose to switch the feature on or off, unlike in some competitors in which the refresh rate is variable. This means the phone won’t reduce the refresh rate when it isn’t needed. This also means that the battery will drain quicker.

When comparing the Xperia’s OLED screen to an AMOLED screen, it was a close call but the rival display just edged it with more vivid colours. You can find this type of offering on several phones like the Samsung S series, or the OnePlus. 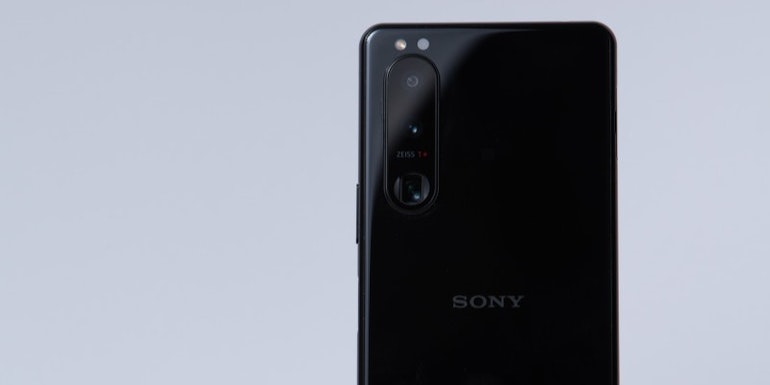 The triple camera setup gave us some great results. Striking colours are presented accurately with a reasonable amount of clarity preserved when looking closely. The tech giant has upgraded its camera offering too, installing a telephoto lens capable of variable focal lengths.

The telephoto camera operates from between 70mm and 105mm and is combined with improved software to help clean up images. As a result, the quality of zoom pictures look fantastic from close range.

The 12-megapixel cameras provide good all-round results, whether you like photographing flowers or a favourite pet, your photos will pretty much always look nice.

The eight-megapixel selfie camera on the other hand, is okay without being remarkable. The face looks a bit pale in a brightly lit room and facial blemishes lack a little bit of nuance.

Last year’s model featured two camera apps, one for the pros and another for the casual snappers. This year Sony has seen fit to blend the two into one neat package, with a separate pro app for video filming. However, the professional-level app runs the risk of putting the average user off.

If you like the occasional shot, then all you need to do is point and press as normal and you’ll get some pleasing results. If you want more flexibility, then just flick across towards the type of control that you want.

You can control specific options like shutter speed and exposure. You can also change the white balance, alter focus settings, change the type of zoom being used and plenty more.

Pre-set modes like portrait and panorama are not front and centre as you would see on other phones. You instead get the option to adjust the camera’s zoom in stages and change the aspect ratio. Those presets can be found tucked away under the ‘More’ menu.

There is no selectable night mode option. Novices must rely on the software to trigger it automatically.

Luckily the system is good at detecting low light situations and acting accordingly. If you have the flash switched on you will receive respectable results, even in poor light. 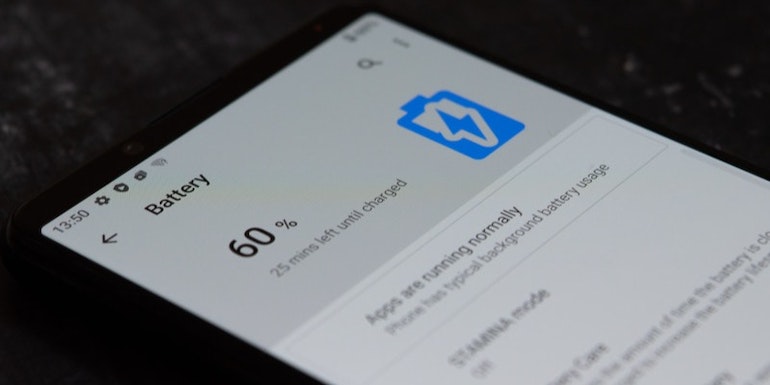 The Xperia 5 III ran quickly and responsively during our time with it. Sony’s version of Android is a smooth experience. That said, certain apps are pre-installed and cannot be removed.

The phone handled a couple hours of streaming without becoming hot or strained. While apps downloaded quickly, we did notice that software updates took longer than we would expect.

One of the biggest upgrades on last year’s effort is a boosted battery. The battery shoots from 4000 mAh on the Xperia 5 II to 4500 mAh which will get you through the day with a fair amount of use.

In real terms, watching an hour-long episode on Netflix, only costs 6% of power. With just over two hours of streaming, we ran the battery down from 51% to 26%.

You will be able to check social media, watch Netflix and take some snaps, without being caught short.However, if it’s going to be a long day you will want to bring your charger with you.

Sadly, you won’t be able to energise your phone with a wireless charger which is disappointing as the function is readily available from other manufacturers.

Although it’s not the best speed, it’s still enough to ensure that you shouldn’t be inconvenienced.

The phone also comes with 128GB of storage. You can also choose to add external storage if you wish.

Is the Xperia 5 III good for people with sight loss?

The screen is bright and clear enough to see emails, films and apps, but this will be more difficult in bright sunlight.

It’s worth noting that you can increase the font size and the display size. Increasing the display size effectively enlarges what you are seeing on screen. This is great if you want to read an online article or view app content.

The only caveat is if you make the display too big it can cut off important text or options that you may need.

You will also find an Android Accessibility suite on board. This includes a magnifier and text to speech player.

Is the Xperia 5 III good for people with hearing loss?

The Xperia 5 III is hearing aid compatible, and you can pair equipment via Bluetooth.

The Android Accessibility Suite also provides Live transcribe. This is a great tool that dictates conversations between you and other people. When we have tested the feature in the past it has proven to be very accurate and easy to use.

If you don’t see it within Accessibility, then don’t worry. Live transcribe can be downloaded via the Android Accessibility Suite app. One of the fantastic things about the handset is its sound quality. The famous Dolby Atmos is on board which means the speakers not only sound loud but clear as well.

Is Xperia 5 III good for people with physical disabilities

At 168g the phone is light and should be easy to hold.

One-handed mode will be useful for those who do not have the full range of movement in their hands. This mode makes the screen smaller so one hand can in theory work the screen.

Doing things like typing will take practice. Finding the right letters on a smaller keyboard may prove tricky.

Setting up the fingerprint scanner may also be challenging. The process isn’t too difficult, but it does require that you’re able to position your finger in just the right place. This is made a lot easier with a supporting hand.

The Xperia 5 III is a strong, if familiar, package. It either keeps or gently builds on what worked from last year’s model. The upgraded camera impresses with a lot of control afforded to experts.

At almost £900, it might be difficult for current Xperia 5 II owners to justify an upgrade. There is no wireless charging and charging speed is not the fastest. What’s more, the display is good, but can be beaten. Dolby Atmos sound is a real plus though.

However, if you have a passion for photography and want more control over your vision, then it will be hard to turn down the 5 III. If you enjoy movies and need expandable storage, then the 5 III will have you covered.

If you’re not a photography lover, then you might struggle with the more complex pro-camera app and instead might prefer to spend your budget on a smartphone with other features.