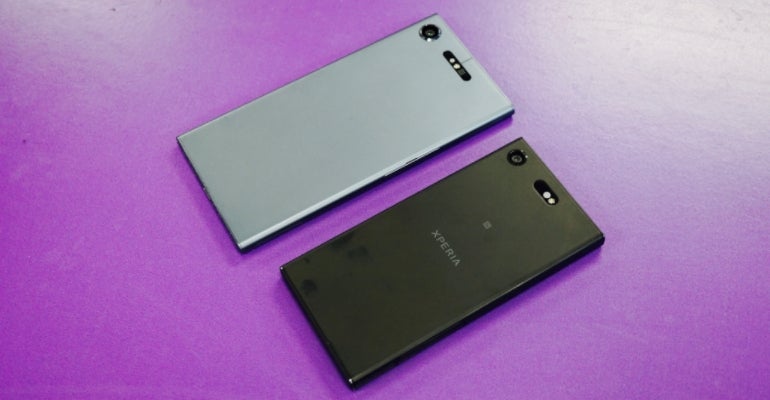 As soon as you take the Xperia XZ1 and XZ1 Compact out of the box, you recognise them instantly as Sony phones. The angular corners, curved edges and sturdy construction that have become the hallmark of Sony phones, are all present and correct on both handsets.

While neither has an all-screen front of the sort that we’ve seen on many of this year’s high-end devices, there’s definitely something reassuringly familiar about Sony’s tried and tested design.

Both phones have a fingerprint scanner built into the power button on the side. Which feels like a stroke of genius, as it allows you to wake the screen and unlock the phone all with one press. It also frees up space at the front of the device for Sony’s dual speakers. More on them in a bit.

As you’d expect, there’s a big difference between the two devices when it comes to size. XZ1 is a hefty 148 x 734mm. So it’s quite a large device. Perhaps even a bit too big for people with small hands. The XZ1 Compact, however, is a much more manageable 129 x 64mm. Making it the perfect size for those of us with Donald Trump-like palms.

The curved edges make the phones easy to grip, while the strong metal construction will help them survive if they do take a tumble.

The XZ1 is built from a single piece of aluminium. So it feels sturdy without being unnecessarily heavy. The XZ1 Compact, meanwhile, is made from a woven plastic material. But despite this, it actually feels surprisingly premium and nice to use.

The subtle sheen on the XZ1 and XZ1 Compact looks lovely and remains mostly fingerprint-free. It’s also very hard to scratch, so you’ll be able to use it without needing to fork out for a case.

Both models are available in black, silver, blue and pink. 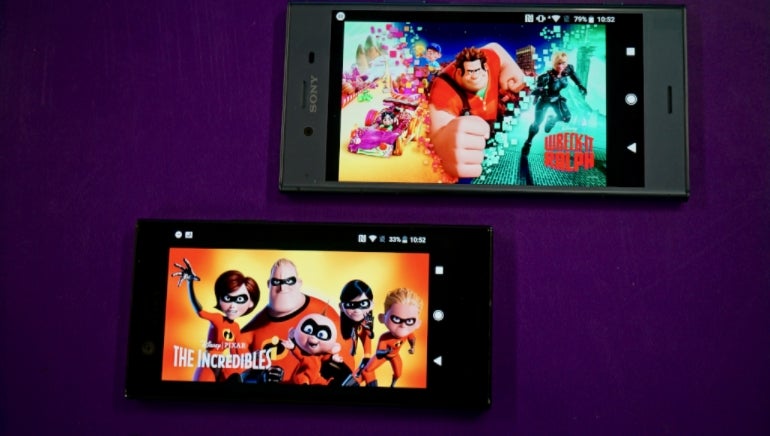 Although smaller than we’re used to nowadays, both the XZ1 and the XZ1 Compact have super-sharp LCD screens that are perfect for watching videos and playing games. While the infinity displays used on many of this year’s flagship phones give you a great viewing experience, there’s something undeniably practical about the XZ1’s chunky bezels. It gives you somewhere to rest your thumbs while you’re watching and means they won’t encroach on the screen.

The larger XZ1 supports HDR, so you can watch brilliantly bright, clear videos on services like Netflix, YouTube and Amazon Prime.

Somewhat unsurprisingly, the XZ1 Compact doesn’t support HDR. But unless you’re a hardcore gamer or you use your phone to watch all the latest blockbusters in full HD, then the XZ1 Compact screen will be more than sufficiently crisp for you.

In fact, not adding a Full HD screen to the XZ1 seems like a sensible decision. It would likely be a huge drain on the phone’s battery without significantly improving the display. This way, you can watch more for longer without any noticeable loss of image quality.

The XZ1 and XZ1 Compact come with powerful dual speakers around the front. This gives you fantastic audio, whether you’re listening to music, watching videos or chatting on FaceTime with your mum.

And the handy placement of the speakers at the front of the device means that you’re unlikely to accidentally muffle the sound with your hand.

Traditionally, one of the main reasons to get a Sony phone is the high-quality camera tech included on its devices. And the Xperia XZ1 and XZ1 Compact are no exceptions.

If you’re all about the filters and photo effects to make your images Instagram-perfect, then either of these phones will really do you proud.

Both come with loads of fun filters, from ones that make your photos eye-wateringly bright to ones that give the impression that you’ve sketched the image yourself. There’s a Partial Colour filter that shoots in black and white and one other colour of your choosing. Which will give you some incredibly dramatic results. In short, there’s no end of ways to make your photos look artfully professional with no real know-how.

There’s also an AR Effects option, which lets you superimpose augmented reality animation over the top of your photo. So you can make dinosaurs or fairies run around your image, or send the subject of your photo twenty-thousand leagues under the sea by surrounding them with virtual water, coral and fish.

It’s a lot of fun to play around with. And the results won me more likes on Facebook and Instagram than any regular photo of my face has ever received. I’m trying not to take this personally.

And even without all the fancy filters and augmented reality, the XZ1 and XZ1 Compact will still give you really great shots. The Manual Mode gives photography enthusiasts loads of extra options. Conversely, if you can barely tell one end of a cameraphone from the other, the Auto Mode makes it really easy for you to take clear, detailed shots.

Around the front, you can use the light from the screen as a flash for the selfie camera, giving your pictures a more natural, less deer-in-the-headlights look. And it’s got Smile Detection, meaning that you can actually take a photo just by grinning at the camera. 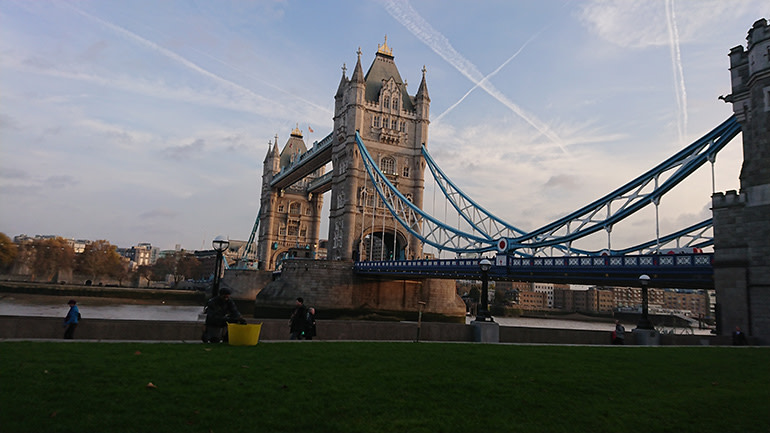 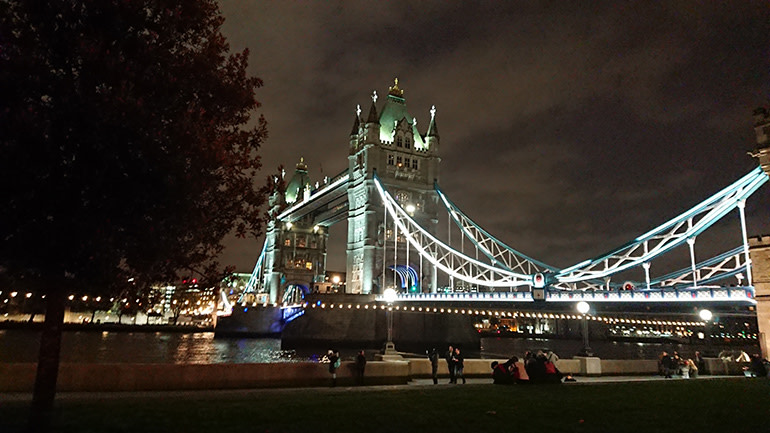 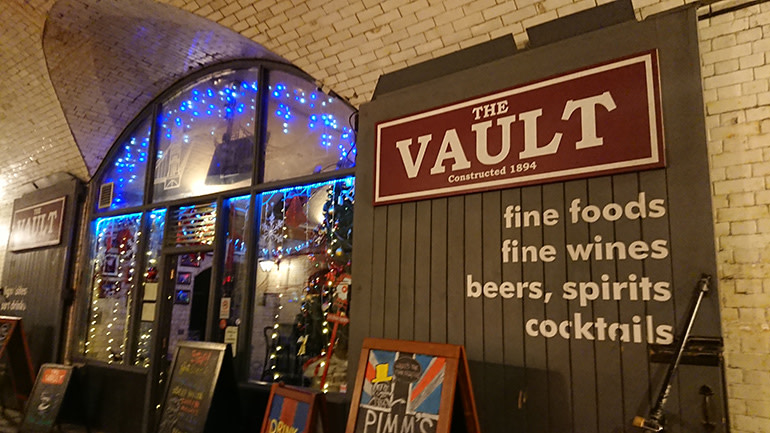 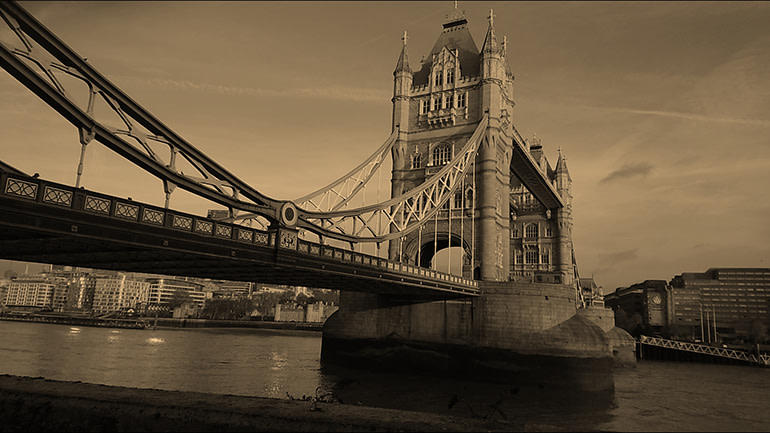 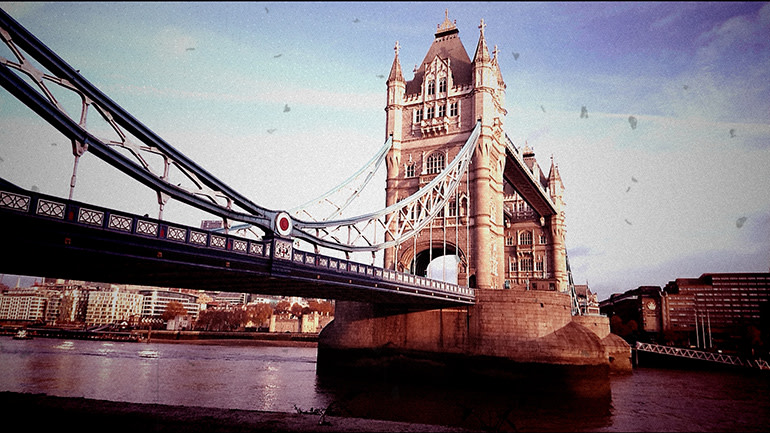 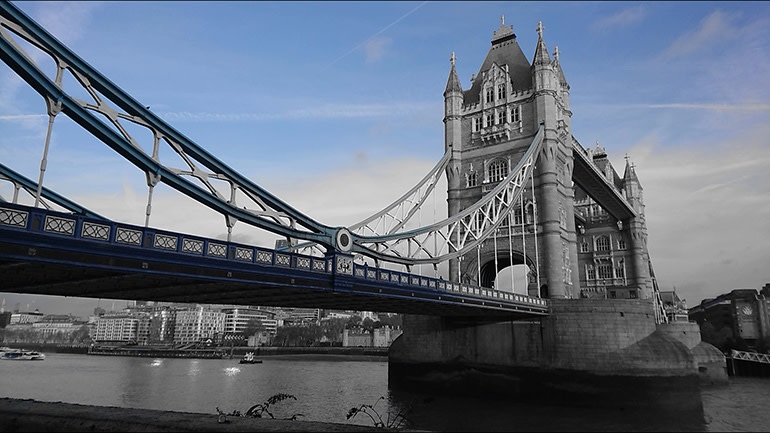 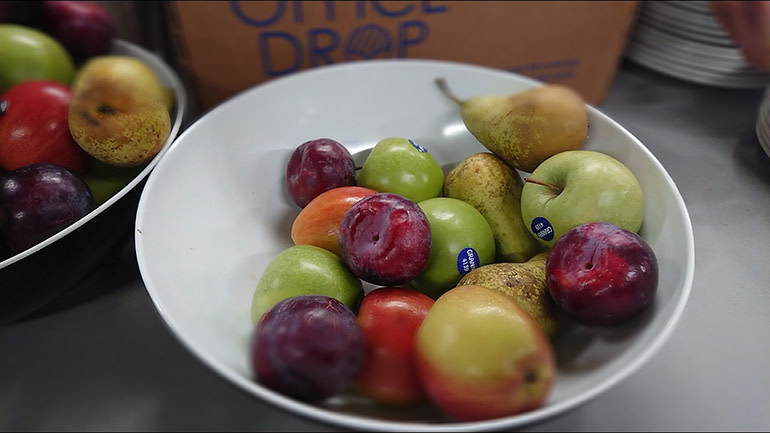 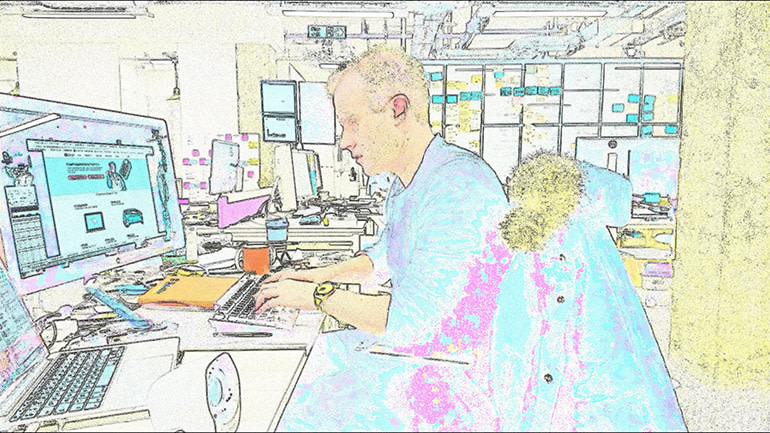 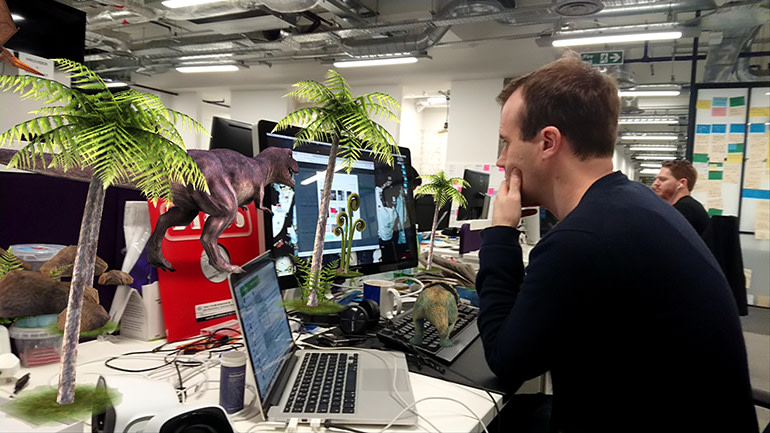 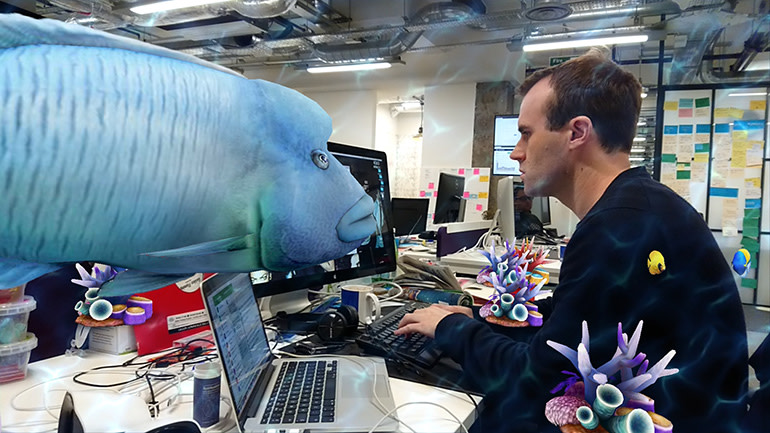 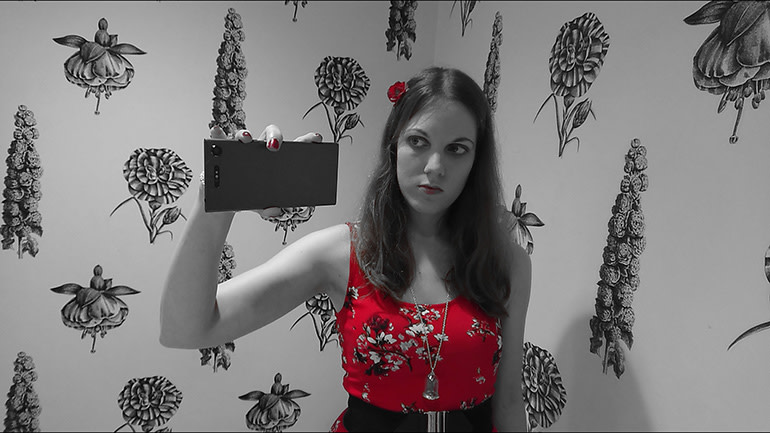 The dedicated camera shutter button is really useful. Not only does it make it easier to take a photo, but it’ll also launch the camera app no matter what you’re doing. So, you’re much less likely to miss it if your pet or child is doing something especially adorable.

The camera loses a little bit of detail a bit in low-light. But then, what smartphone camera doesn’t? And you can always tidy this up with a bit of photo editing.

Want to find out more? Check out our Sony Xperia XZ1 camera review. 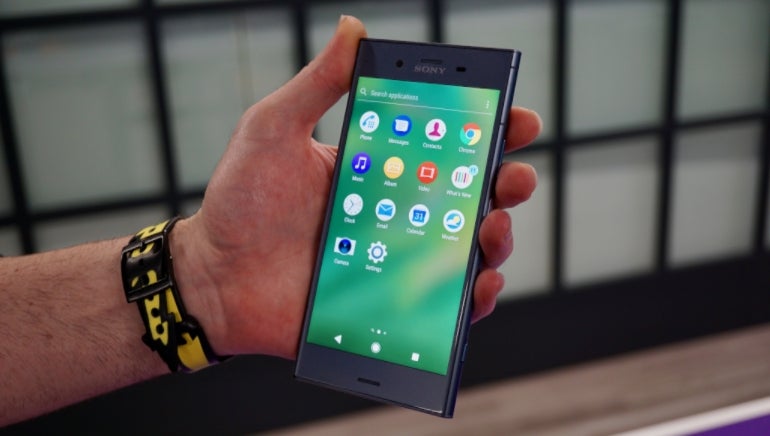 One of our favourite things about the Sony Xperia XZ1 and XZ1 Compact is that they come pre-loaded with Android Oreo.

With a slick, clean navigation, minimal bloatware and lightning-quick load times, it’s a dream to use. And the Snapdragon 835 processor and 4GB of RAM keep it running fast and smooth, even when you’re flipping between apps.

We found the 2,700mAh battery gave us a full day of heavy usage on a single charge for the XZ1. The XZ1 Compact could survive a day and a half without needing to be plugged in.

When you do run out of juice, both the XZ1 and XZ1 Compact are equipped with fast-charging tech, which promises to boost your battery from zero to 50% in about half an hour. Unlike many phones we’ve tested, this was every bit as quick as advertised. So we were recharged and ready to go again in under 30 minutes. 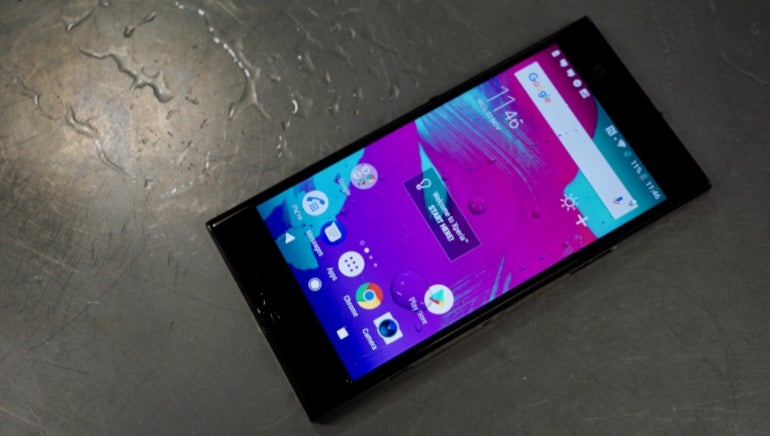 Sony has long been making smartphones that are built to survive the rough and tumble of everyday life. That goes for the Xperia XZ1 and XZ1 Compact too.

Both are IP68-certified for dust and water resistance, meaning that they can survive for up to half an hour in as much as 1.5 metres of water. So, they’ll definitely withstand an accidental dunk in the bathtub.

Not only this, but the XZ1 is made of aluminium, making it super sturdy and hard to break. And while the XZ1 Compact is constructed of a woven plastic material, it still feels pretty strong.

In fact, both phones have survived weeks being thrown around in my bag and have been knocked off my desk more times than I’d like to admit. And still neither has as much as a scratch. 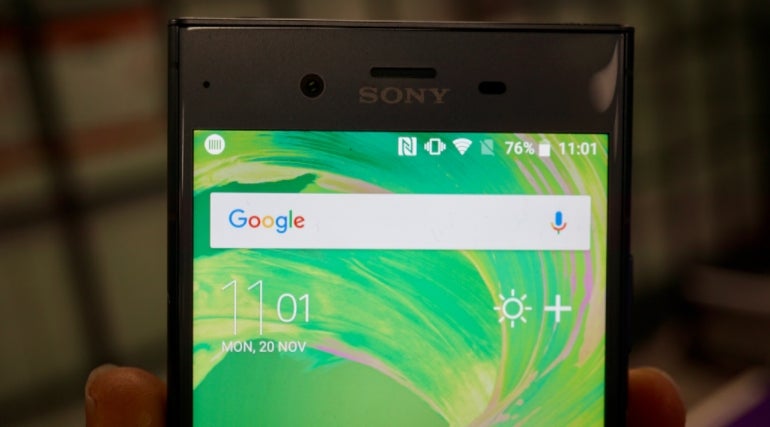 Let’s get down to the most important bit: how much do they cost and are they worth the outlay?

You can currently buy the full-sized Sony Xperia XZ1 SIM-free on Amazon for £549.

Or you could get the smaller XZ1 Compact SIM-free on Amazon for £399.

While they’re clearly not the cheapest phones on the market, you’re actually getting a lot for your money.

With impressive camera smarts, a long-life battery and IP68 waterproofing on both the XZ1 and XZ1 Compact, there are lots of very high-end features for the price you’re paying.

The larger XZ1 has a big screen that’s great for watching films and videos, while the XZ1 Compact is a pocket-sized handset filled with premium extras often reserved for larger, more expensive phones.

And if you don’t have hundreds of pounds to spend in one go, both phones are available on monthly contract. The XZ1 is currently free from £36 a month. You can expect to pay around £32 a month for the XZ1 Compact with no upfront costs.

Tempted? Check out all our best Sony Xperia XZ1 deals.

We get the measure of Sony's new mid-priced smartphone.