Surfshark is a relative newcomer on the Virtual Private Network (VPN) scene, yet it promises to offer one of the most advanced services on the market.

The company, which first released its VPN in 2018, boasts more than 1,700 servers across 63 countries with apps for almost every device you can think of (there’s apps for Windows, Mac, Android, Linux, iOS, and FireOS and extensions for Firefox and Chrome). And it comes with a bumper list of features, including a website-unblocking Smart DNS system for games consoles, strong encryption, and a built-in kill switch to ensure your online identity always remains anonymous.

Most people installing a VPN do so because they’re keen to protect their online identity. Thankfully, Surfshark offers all of the privacy basics: it supports secure protocols including OpenVPN UDP/TCP and IKEv2, offers AES-256 encryption, and features a kill switch to block internet access and prevent identity leaks if the connection ever fails.

However, we found the kill switch prevents you accessing the internet at all unless you're connected to Surfshark. Other VPNs offer you the option to revert to your regular internet connection if your connection drops.

Surfshark also offers a multi-hop, often referred to as ‘double VPN’, which passes your traffic through two VPN servers, ensuring that your data is kept private even if the exit server is compromised. There are 14 predetermined options available, including the United Kingdom > France, United States > the Netherlands, and India > the United Kingdom.

Surfshark itself is headquartered in the British Virgin Islands, which is generally considered a privacy-friendly country due to its lack of surveillance-sharing agreements with other countries.

With this in mind, the company is very explicit about its zero-logging policy. It promises there will be no collecting of your incoming and outgoing IP addresses, VPN servers you used, session information, activity history (including downloads, browsing, and purchases), connection times, used bandwidth, or network traffic. To use Surfshark, you simply need to supply an email address.

Another of the main reasons for downloading a VPN is to access video streaming services that would otherwise be restricted by your internet service provider (ISP). Surfshark not only provides access to localised Netflix, but it also offers support for a number of other video-on-demand (VOD) services, including Amazon Prime, BBC iPlayer, CBS and HBO.

Perhaps more controversially, Surfshark supports torrenting, the act of downloading and uploading files through the BitTorrent network. This is something not offered by many of the big-name VPN suppliers. It’s simple to do on Surfshark though. Simply choose a Surfshark server close to your physical location to ensure you have the best speeds, open your torrenting client, and your IP will be automatically hidden.

Speed is, of course, one of the most important features of a VPN, particularly for those using one to access VOD content. Surfshark delivered excellent speeds during our tests. When hooked up to a US-based server, we saw download speeds of 39.97Mbps and upload speeds of 8.66Mbps (compared to our regular connection speeds of 41.91Mbps and 8.07Mbps). And when connected to a server in Singapore, we saw speeds of 19.68Mbps and 11Mbps, respectively.

As mentioned, one of the best features of Surfshark VPN is that it lets you use an unlimited number of devices on one account, whereas most companies cut you off after just five simultaneous connections. That’s handy, as Surfshark has released applications for a huge number of devices, including Windows, Mac and Linux desktops, iOS and Android smartphones, and even consoles and smart TVs. You can even configure your router to work with Surfshark, though this isn’t recommended for VPN newbies.

Surfshark offers a number of extra features, too, one of which - CleanWeb - lets you surf the web with no ads, trackers, malware and phishing attempts. Additionally, Camouflage Mode makes sure even your ISP can't tell that you're using a VPN, while the built-in Whitelister option allows specific apps and websites to bypass the VPN. This is handy for apps and websites that may require local connections, such as online banking. Finally, a baked-in NoBorders feature aims to help you get online in countries where VPNs are commonly blocked.

Although Surfshark comes stuffed full of add-ons and extras, one of the VPN’s best features might be its interface. Its apps and browser extensions are clean and minimalistic, and they don’t bombard you with countless options and settings. It’s ideal for a VPN newbie - you’re only shown the things that matter to the average VPN user, and all options and settings include a clear description and all menus are easy to navigate.

We found ourselves using the Chrome browser extension more than Surfshark’s macOS and iOS apps, simply due to its clean-cut UI and ease of use. You simply tap on the extension, select the server you want to connect to, and you’re instantly ready to browse. 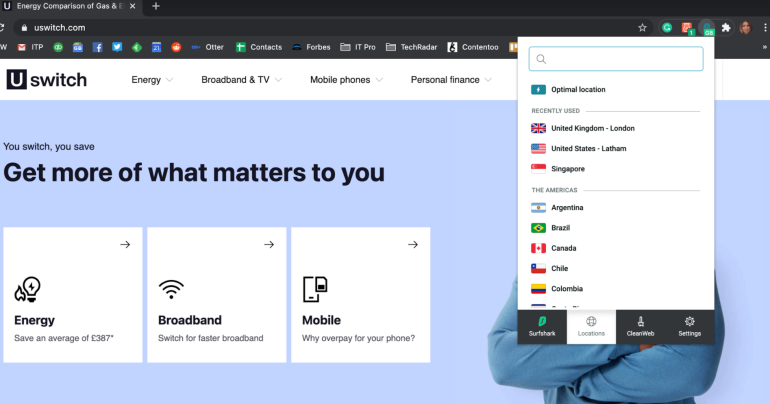 Despite being a relative newcomer to the VPN market, Surfshark offers a capable and inexpensive service that offers a huge array of features, many of which aren’t offered by more established VPN providers. It lets you connect an unlimited number of devices and lets you access VOD and torrenting services with ease.

It’s well-designed too, and it’s clean-cut interface means even those who have never used a VPN before will quickly be able to figure out the ropes. Importantly, Surfshark also boasts an impressive array of security features for those who prefer to keep their connection encrypted and their online identity anonymous.

Overall, Surfshark’s is a great choice for users interested in casual browsing and streaming, and ideal for those who want a fuss-free, affordable VPN.

What is a VPN and why do I need it?

If you want to keep your personal data safe and secure, you'll need to set up a VPN.