The best European capitals for foodies

Knowing where in Europe is best for food can be the deciding factor for food lovers when choosing their next trip. To make the decision easier, we discovered which European capital cities are best for foodies in our latest research.
Share this guide

Going on holiday is great for different reasons. Being able to relax on the beach with a cool, crisp drink in your hand, exploring ancient ruins or going on adventures in the wilderness. For food lovers, it’s all about indulgent meals and tasty snacks.

To make planning your next trip easier, or even give you inspiration for your next home location, Uswitch has found out the best European capitals for foodies. We did this by scraping raw data from Tripadvisor before collecting the results and creating an index. In this index, we looked at ratings for:

We were able to take these factors and find the overall score before discovering the best capital cities for food lovers. 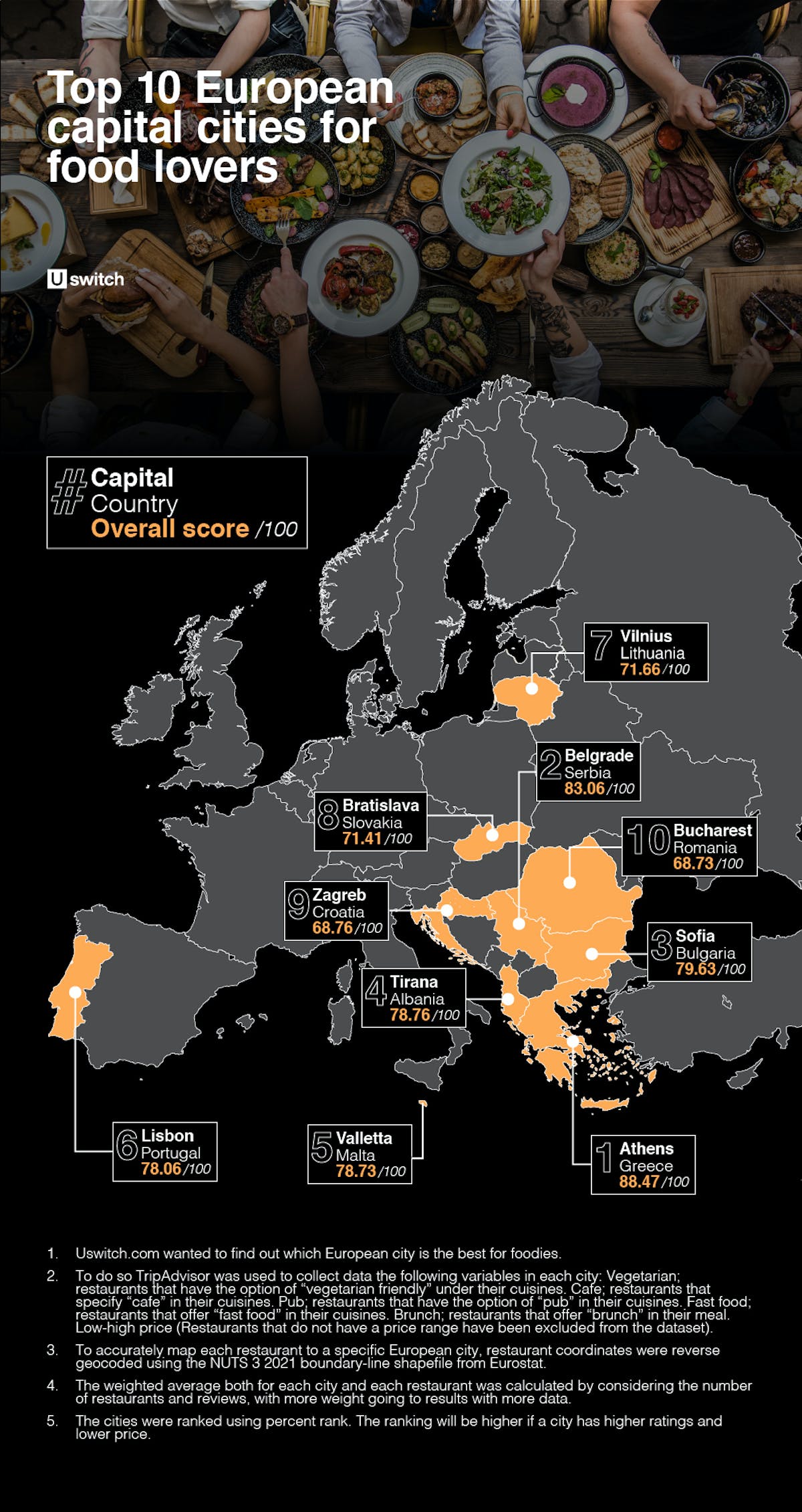 If you’re a fan of reasonably priced yet delicious food, head to Athens in Greece. There are over 1000 eateries to choose from in the city alone, with even more on the outskirts. You won’t be disappointed if you choose to dine at a quaint little cafe either, as these locations have an impressive average rating of 9 out of ten. If you’re looking to budget your meals, you can expect to pay around $19.26 per meal.

Belgrade is not a bad choice for foodies either. With an overall score of 83.06 out of 100, this Serbian capital is best for highly rated for their pubs as they scored 9.05. The average meal cost is slightly cheaper than Athens too, at $18.48.

Looking for something quick to eat on the go? Head for the Bulgarian capital of Sofia as it’s one of the best for fast food, after receiving average ratings of 9.02 out of 10. The cafes are definitely worth a visit too as they also scored highly.

Tirana, Valletta and Lisbon are all great spots for brunch for those who love to take the time to socialise, eat well and still sleep in. All three capital cities have an overall score within the 70s out of 100 too, so they’re good choices for food lovers. Tirana is even in the top 10 European countries with the cheapest car hire which will be handy to travel between all of these food spots.

The central European capital cities of Bratislava (Slovakia) and Zagreb (Croatia) are two other locations with quality options for foodies. While Zagreb dips below 70 with its overall score (68.76), it more than makes up for it with its highly-rated cafes.

Completing the top 10 is Bucharest in Romania. Achieving an overall rating of 68.73 out of 100, it has its highest scores in the quality of cafes (both in the atmosphere and the food itself) and fast food. So, whether you’re someone who likes to dine in charming buildings or just want to grab a speedy snack, Bucharest has got both covered. 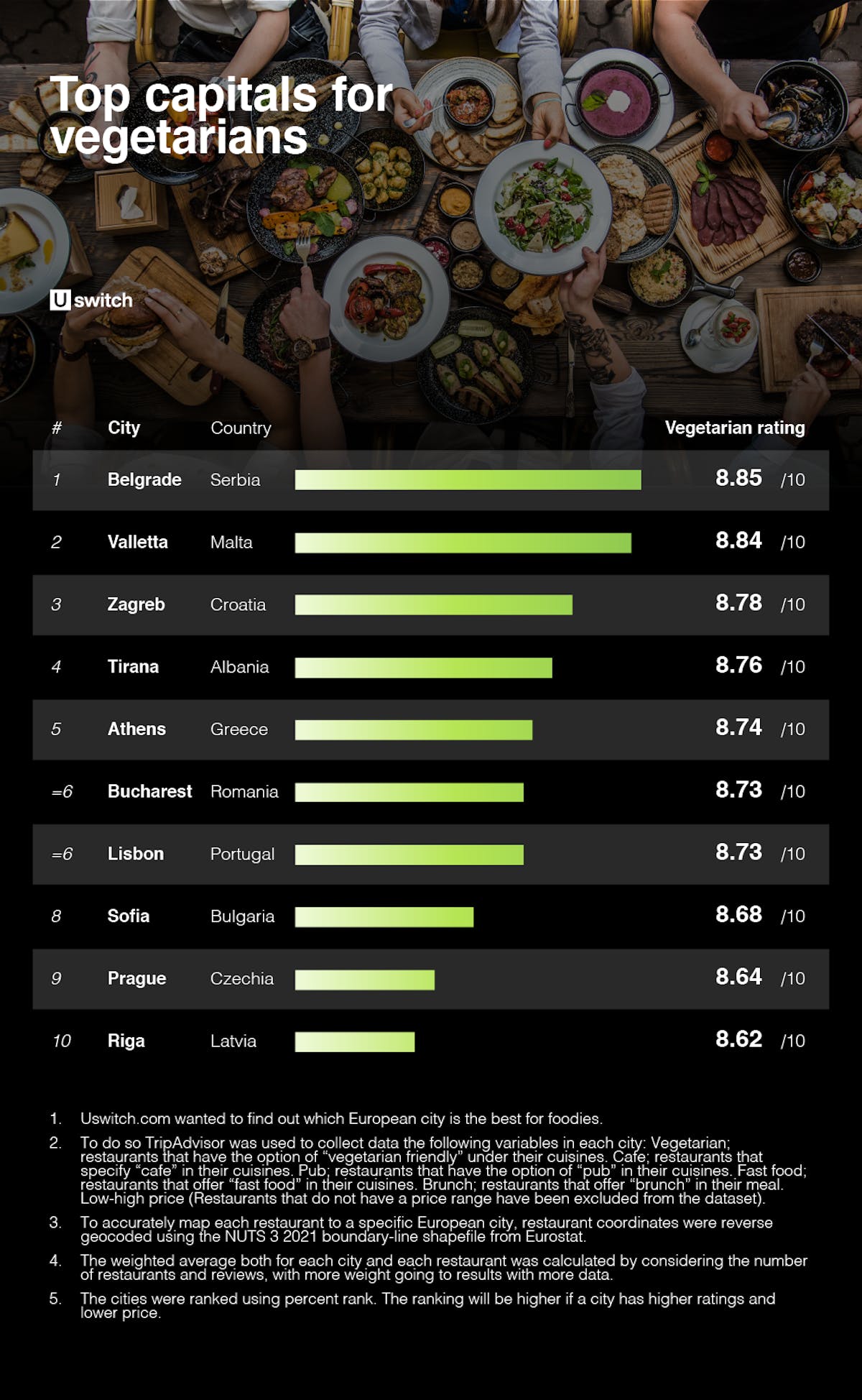 Finding a spot that serves up vegetarian food that is as delicious as the other meals on the menu is not easy. To make things a little easier, we’ve found the top capitals for those who prefer to not eat meat or just love a vegetarian meal.

Belgrade is the best city in Europe to put on your bucket list if you want tasty vegetarian cuisine. Although the traditional Serbian cuisine is quite meat-heavy, restaurants, cafes and other eateries earned an average score of 8.85 for the protein-rich and nutritious vegetarian meals that don’t skimp on taste.

The Maltese capital of Valletta comes in second, just missing out on the top spot with an average rating of 8.84. These restaurants include those dedicated to vegetarian cuisine and other ones that have an impressive meat-free section on their menu.

Other capital cities vegetarians should make travel plans for are Zagreb, Tirana and Athens. All with an average rating over 8.7 out of 10, these are. With one of the first entirely plant-based hotels located in Greece too, both the capital and the country as a whole is a great place to visit for vegetarians.

There are two cities in joint sixth place, Bucharest and Lisbon. Both have scores of 8.73 for the range and taste of the vegetarian options in restaurants. Portugal is one of the best European countries for adventure too, so you’ll be sure to work up an appetite.

Other capital cities to visit, or move to, if you want varied meat-free meals widely available are Sofia, Prague and Riga. These cities have scores over 8.6 (8.68, 8.64 and 8.62 respectively), according to our research. 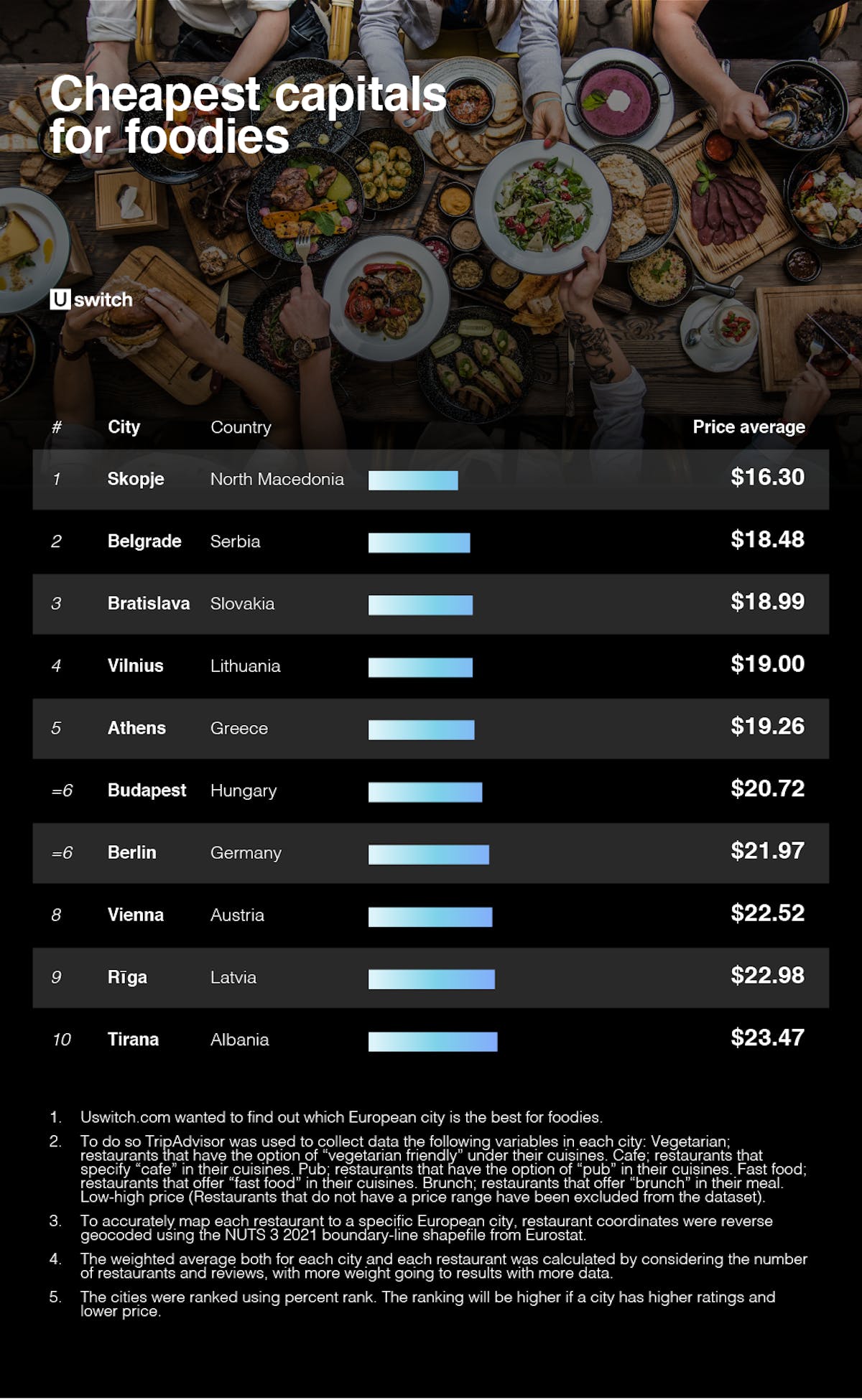 If you’re travelling on a budget, these are the places for you. We found that Skopje in North Macedonia had the lowest price average for meals, at just $16.30 which is roughly equivalent to just over £12! If you’re visiting from the UK, find the best networks for international roaming too to keep the costs down.

Belgrade, which appeared highly on the best cities for vegetarians and top capitals for food lovers in general, also features on the cheapest places for foodies. You can expect to pay $18.48 for a meal, which you can be sure will be delicious.

Bratislava, Vilnius and Athens are other purse-friendly locations for foodies. The average cost of meals in these places will be around $19 with the cheapest being $18.99 in the Slovakian capital.

The German capital of Berlin is another affordable place to go and indulge in mouth-watering food. Meals will usually cost around $21.97 (about £16 and some change), and you’ll get to enjoy the views of German architecture such as the Reichstag or Potsdamer Platz. 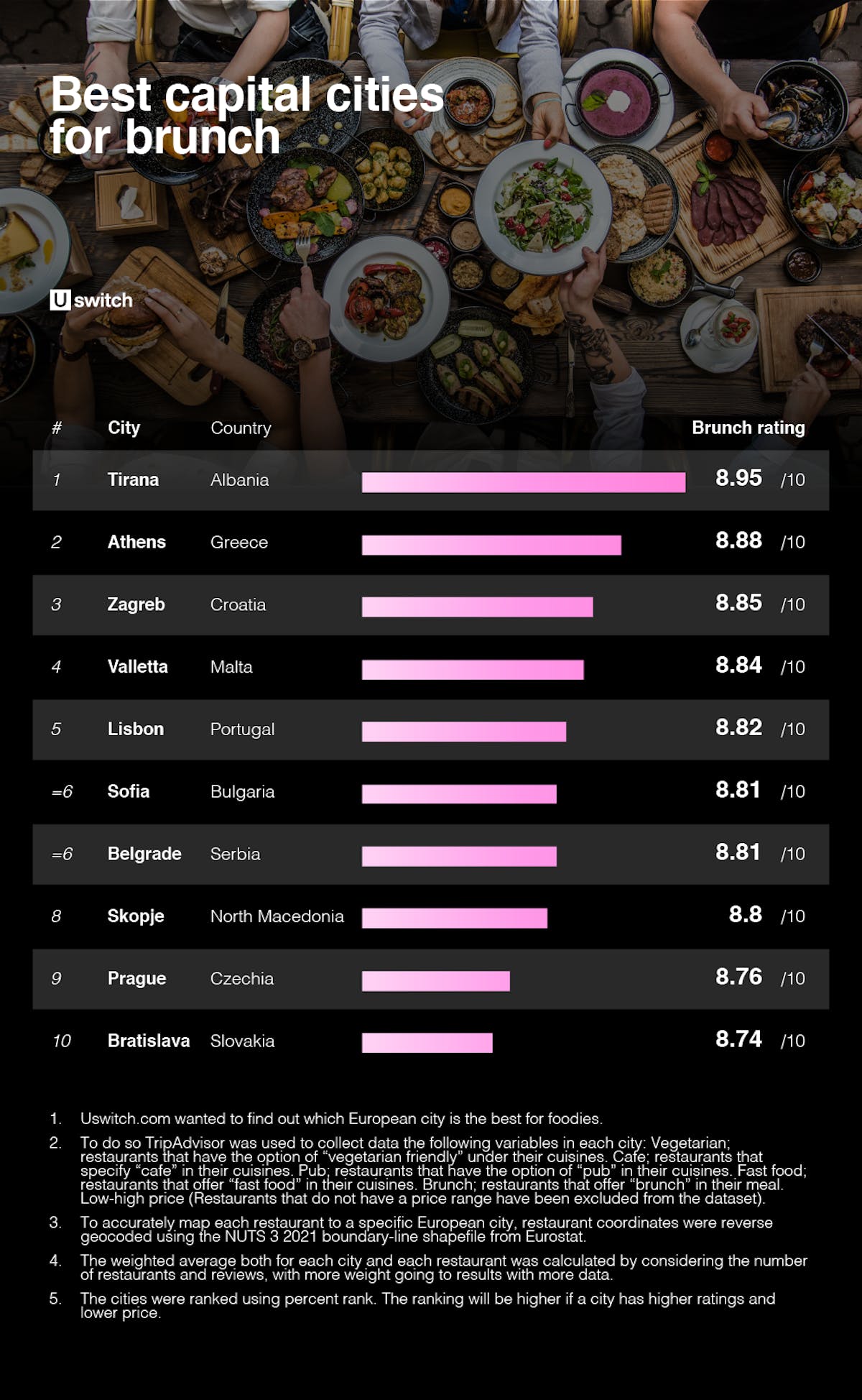 Brunch has become a cultural phenomenon in recent years with it being the perfect plan for face-to-face conversation and connection but which capital cities do it best? Tirana in Albania has been awarded an average rating of 8.95 for its brunch spots by visitors. So if you’re in the mood for pancakes, pastries or eggs, head there.

Athens, Zagreb and Valletta are other excellent places to go if you’re a fan of mid-morning munching. Each capital has a rating of over 8 out of 10 for restaurants offering brunch, with Athens having the highest of 8.88.

There is another joint spot for sixth place, this time with Sofia and Belgrade. They’re both even with average scores of 8.81 for the options in restaurants or eateries that are completely focused on brunch.

Head for Prague if you’re a food lover that enjoys brunch as this location has some of the best in Europe. Having been left an average rating of 8.76 from visitors, it’s likely that you’ll be able to easily find a venue that delivers on both atmosphere and taste.

You can compare mortgages to find the best deal for you. The full results