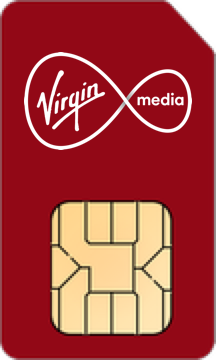 Virgin Mobile’s service gives you superfast 4G speeds of up to 70Mbps, covering 99% of the UK population

Chat, text, share photos and more without dipping into your data allowance. Free messaging is standard for all Virgin Mobile pay monthly plans.

Keep any unused data from one month to the next with all pay monthly Virgin Mobile SIMs.

Virgin Mobile's mobile phone service is based on Vodafone's network, which offers 5G in a number of locations and 4G to 99% of the population.

Virgin Mobile's mobile phone service is based on EE's network, which offers an average connection speed of 29.02Mbps.

Virgin Mobile customers can use their inclusive, texts, minutes and data for no extra charge in 33 locations with its Roam Like Home scheme.

Virgin Mobile offers SIM-only for customers who just want to pay for a monthly allowance of texts, calls and data and Freestyle pay-monthly phone contracts, which include allowances and a handset.

The network's SIM-only plans operate a 30-day rolling contract basis, so you're free to cancel with a month's notice.

The plans also allow you to upgrade or downgrade your allowances on a monthly basis. So if you find you're paying for data you don't need, you can switch to a lower allowance to save money.

You can also roll over unused data from month to month, so it doesn't go to waste.

Virgin Mobile's Freestyle phone contracts offer the same flexibility as its SIM-only deals, with the option to downgrade or upgrade to a lower priced tariff on a monthly basis, and feature the same roll-over data scheme too.

Like O2 Refresh, Tesco Anytime Upgrade and Sky Mobile Swap, Virgin Mobile contracts include an early upgrade option on your handset. This means that if a new smartphone appears that catches your eye, you don't have to wait until your contract ends to get it.

Virgin Mobile was launched in 1999 as an extension of Richard Branson’s world famous brand. Within a year of its launch it boasted 500,000 customers and by 2001 had one million, making it the UK mobile communications company to hit this landmark within the shortest time.

As well as the UK, the company operates in India, Australia, Canada, South Africa, the United States and France.

Moving to Virgin Mobile and want to keep your phone number from another network?