‘Refurbished phones’: what does it mean?

The term ‘refurbished phone’ generally refers to a pre-owned handset that has been sent back due to a fault and has been repaired for re-sale.

Not all phones described as refurbished were at one stage faulty, though. Some networks and retailers classify 'refurbished phones' as handsets that were returned by customers who changed their mind within the 30-day cooling-off period after they signed up for a contract.

Before being put on sale, all refurbished phones have been thoroughly checked and tested to ensure they’re in full working order.

Tests carried out by the seller typically include whether the battery charges and checking the buttons and cameras work. The seller will also verify audio quality and screen responsiveness, as well as how the phone connects to Wi-Fi and 3G/4G.

In keeping with Data Protection Act, the seller will securely wipe any data on the phone. So to all intents and purposes, you’ll be starting afresh.

Some refurbished phone sellers update the handset to the latest version of the operating system that powers it.

Let’s face it, an iPhone has been the must-have piece of tech for the last decade. But unfortunately they come with a price tag to match. So, if you’re looking into getting an iPhone but don’t want to spend a fortune, buying a refurbished iPhone might be a good alternative.

Where can I buy a refurbished iPhone?

When buying a refurbished iPhone, we always recommend using a reputable retailer. Luckily, most of the best-known UK providers now sell refurbished phones on monthly contracts.

If you want to buy a refurbished phone outright, mobile specialists such as Carphone Warehouse and Direct Mobiles stock a huge range of refurbished iPhones. Alternatively, popular sites such as Amazon and eBay will also have a wide variety to choose from. Just be sure you read the small print to check what condition it’s in before you buy it.

You can even buy a refurbished iPhone direct from Apple.

Will a refurbished iPhone be covered by Apple if it has any software issues?

Yes. If you have any problems with the software, you can take it into an Apple Store and an Apple Genius will take a look at it for you.

Buying a refurbished iPhone that's almost as good as new

We bought a certified pre-owned (CPO) refurbished iPhone 6S from buymobiles.net. And I have to say, we were very impressed.

It came in official iPhone-branded packaging with an Apple charger included in the box. So far, so good. Even more impressive, the device itself looked every inch the shiny new smartphone, without a single scratch or blemish to indicate that the device was refurbished. 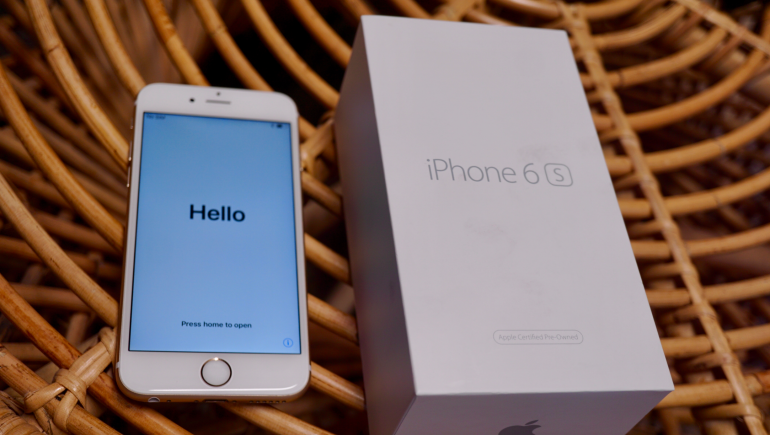 And once we fired it up, the iPhone 6S worked just as smoothly and speedily as any brand-new Apple device we’ve tried. As the reviews on the site attested, it really would be difficult to spot the difference between the refurb and a new handset.

We ordered a refurbished iPhone 6s and iPhone 7 from Direct Mobiles.

As you’ll note from the photos, this time around they didn’t come in the original packaging and instead arrived tucked in generic white packing boxes.

They also didn’t include chargers, headphones or the pin you require to open up the phone and insert your SIM.

The Lightning Connector cables that you’d find in the box if you bought the phones new were missing too.

So you’d have to stump up extra to get hold of those. Unless you’ve got old ones hanging around, that is.

Any nicks and scratches, though? Well, under forensic inspection we noticed the tiniest blemish at the top right on the rear of the iPhone 7. But we had to look very hard to see it. 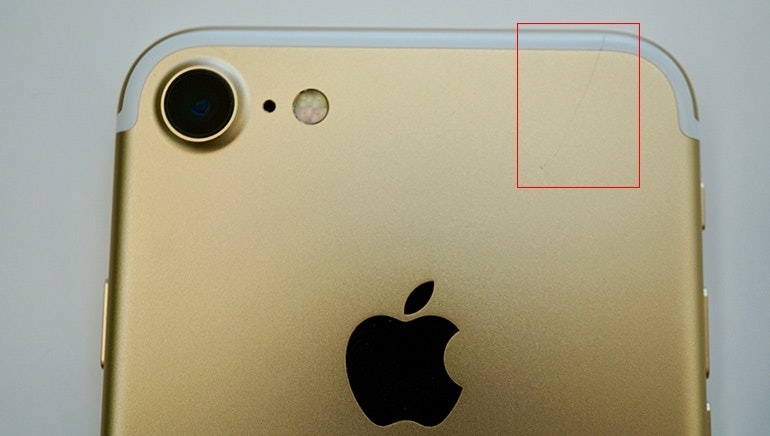 Refurbished iPhone 7 and 6s in hand back hero size

Conversely, the iPhone 6s looked perfect. If you’d positioned it next to a genuinely new 6s and tasked us to tell the difference a la Pepsi Challenge, we’d have been stumped.

Once again, we spent a week with them for testing purposes. We got a day’s full use out of the iPhone 7 on a full charge and about six hours or so from the 6s. Both worked with the sort of zip you’d expect from a new handset too.

When you buy a pre-owned phone from Direct Mobiles you don’t get a manufacturer warranty.

But you are covered by a 12-month warranty from Direct Mobiles, so you’ve got some recourse in the event that a fault does become apparent some way down the line.

Should I buy a refurbished Samsung phone?

In the interests of research, we bought a refurbished Samsung Galaxy S7 Edge and brand new edition of the same phone from mobilephonesdirect.co.uk.

So what was the difference? What were we missing out on buying a nearly-new phone? Essentially, nothing at all.

On the right in the photos here is a freshly unboxed, brand new S7 Edge.

On the left is the refurbished model. Housed in an identical Samsung-branded box, the refurbished phone arrived free of blemishes, nicks or scratches to the screen or body. It’s genuinely as good as new.

Samsung Galaxy S7 Edge vs refurbished phone back of handset 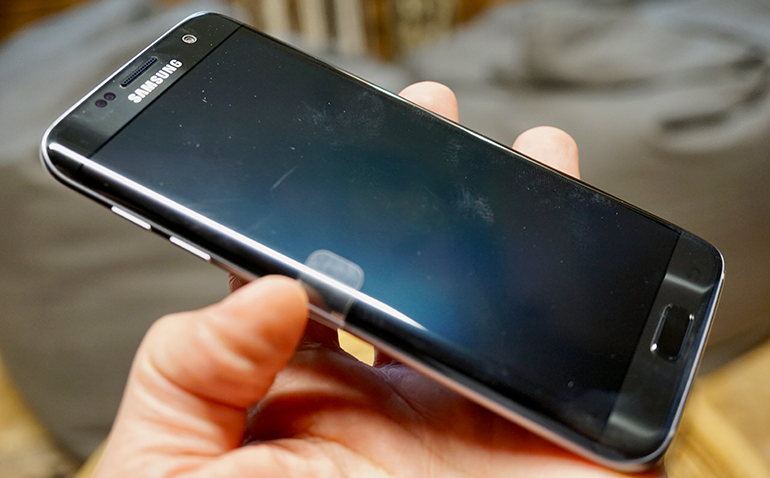 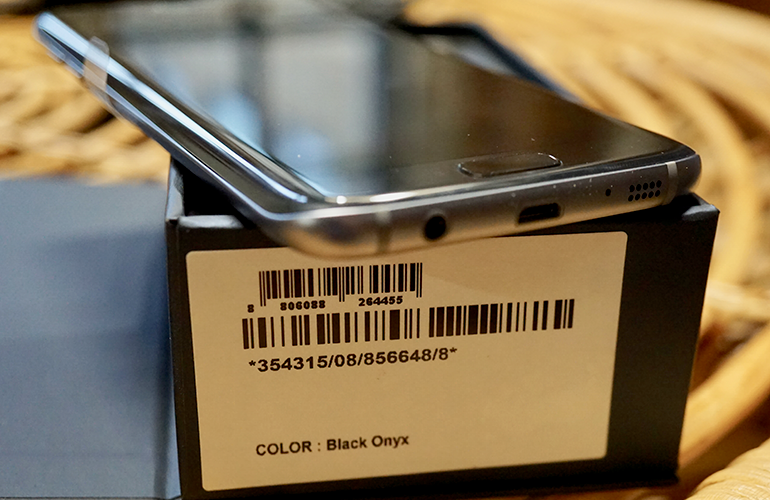 In the box for the refurbished S7 Edge, there was an official Samsung charger, Samsung headphones, instructions and a pin for opening the SIM tray. These were all identical to those supplied with the new handset.

The refurbished phone was also fully wiped, so there’s no trace of the former owner’s data. Or any intimate photos that you really don’t want to see.

We used the phones for a week and in that time found the refurbished phone to be just as speedy and smooth as the new one. From the camera to the responsiveness of the screen, everything was in full working order. And we found no difference in battery life either. 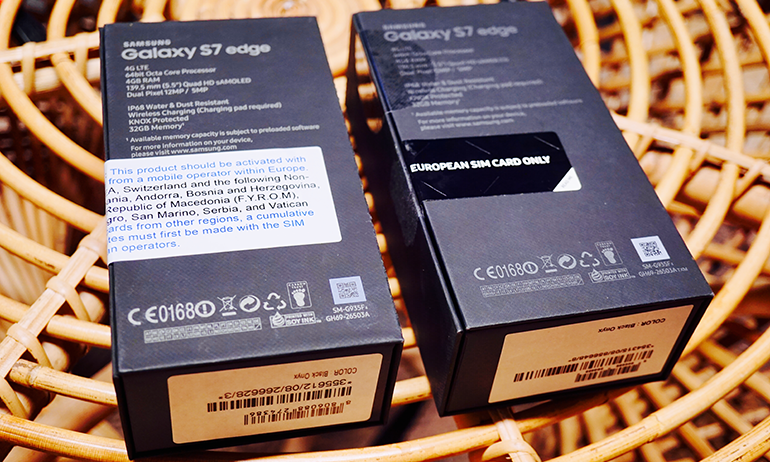 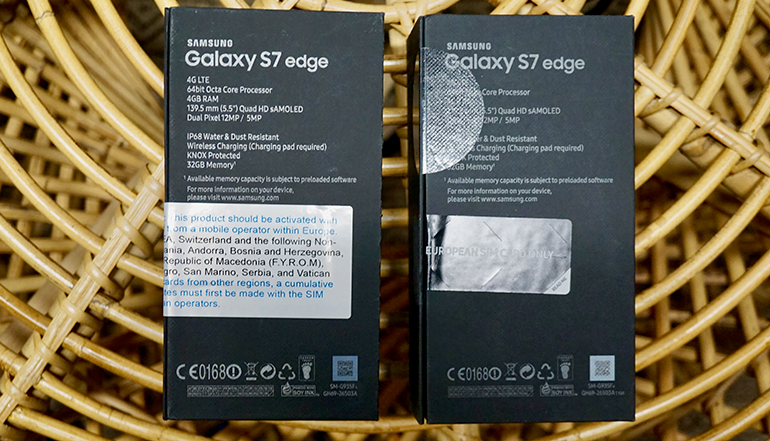 It’s perhaps not too surprising that refurbished phones from mobilephonesdirect.co,uk are a good buy.

A bit of research reveals that the previously-owned phones the retailer classes as refurbished have been used for a maximum of 14 days, before being returned by a customer who changed their mind.

They weren’t returned because they were faulty, so there’s peace of mind in that. And they’ll have been tested by engineers before being resold too.

It's also well worth nothing that the retailer's refurbished phones come with a 12-month warranty. Unless you opt for an iPhone that is, in which case your warranty is six months.

But given that you can pick up pretty good headphones for not much more than £10 on Amazon, that’s something we can live with.

As for pricing, there’s certainly money to be saved by opting for a refurbished phone.

We found a deal from mobilesphonesdirect.co.uk that got you 3GB of data and unlimited calls and texts for £32 a month, with no upfront cost for the handset. Which means that, over a 24-month contract, you’ll pay a total of £768.

If you’d bought the phone brand-new from O2’s website with the same allowances, you’d be looking at paying £40 a month, plus £9.99 upfront for the handset. Which, over the course of the 24-month contract, would set you back a total of £969.

So that’s a saving of £201 overall. Which means you can book a citybreak or that spa weekend you’ve been promising yourself.

‘Should I buy a refurbished phone?’ is a question Uswitch Tech is frequently asked via its Twitter feed and on Facebook. We can’t make that decision for you. But here’s what you need to know to help you make up your mind.

Where to buy refurbished phones

You can also pick up a refurbished phone from auction sites, high-street retailers and specialist re-sale-and-recycle sites such as Envirophone.

How much cheaper are refurbished phones?

That depends. With newer handsets, especially iPhone 6 and iPhone 6s, there’s often very little, if any, difference in price between refurbished phones and brand-new ones. So you may as well buy brand new.

But with some brands, you can definitely save money.

For instance, at the time of writing, the total price difference over the course of a two-year contract between a refurbished Samsung Galaxy S7 on EE and a brand new one also on EE was about £100. That’s for the same monthly allowances.

You can also save money if, say, you want an iPhone but aren’t fussed whether it’s a newish edition. Discontinued models, such as the iPhone 5s, can he had very cheaply on refurbished phone contracts.

Do refurbished phones come with a warranty?

Warranties with refurbished phones depend on where you buy them.

Buy from a major network or retailer, which are the only refurbished phone vendors we have on Uswitch, and you’ll get a 12-month guarantee.

That’s the case with O2, for instance. And same goes for Vodafone and Carphone Warehouse subsidiary Mobiles.co.uk.

Buy from a trader on eBay or Amazon and they’ll also typically offer a guarantee of up to 12 months.

If you’re buying from an individual/private seller rather a trader on eBay, the process of getting a refund is more complicated and could depend on the written description of the phone on the listing. 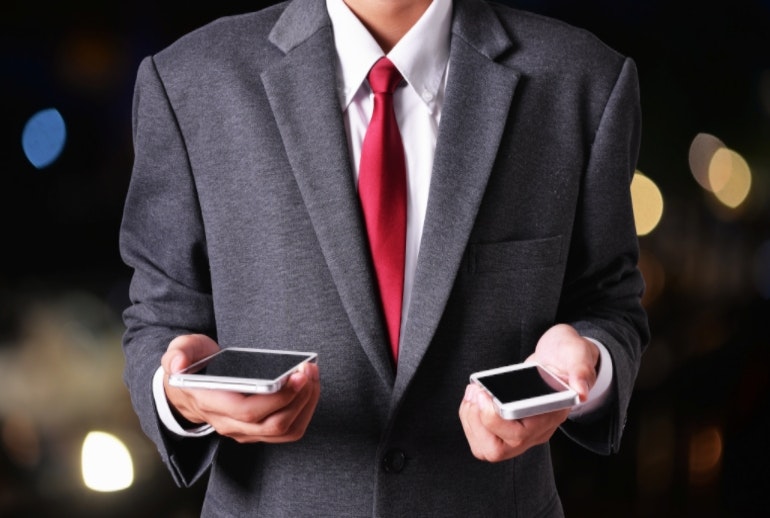 If a phone is described as refurbished and you’re buying it from a network, an established retailer or a trader on an auction site, you can be sure the phone has been tested, cleaned, wiped and is covered by a warranty. So you've got peace of mind in every way.

The term ‘used’ is harder to define, so you'll need to be more cautious. It’s usually favoured by private sellers on auction sites and could mean anything from a few scratches, to battered by frequent drops.

Under eBay’s terms of use, a faulty item can still be returned to a private seller within 30 days for a refund.

All refurbished phones are given a grade that reflects their condition. There’s no universally applied standard for grading, so it’s best to check before buying.

But as a rule of thumb, the grades range from A-D and break down like this:

Most networks will only sell grades A-C. You can get grade D phones from some refurbished phone traders on eBay, but even they’ll typically recommend you only buy one if you’re able to repair phones yourself.

To complicate things further, some networks use their own grading system. O2, for instance, favours the grades ‘Perfect’, ‘Almost Perfect’ and ‘Perfectly Fine’.

But where networks do use their own system, you can usually find a key explaining grades on their site.

You can compare SIM only contracts at our dedicated comparison page.

Looking to sell your old phone?

From how to write product descriptions to tips for cleaning up your phone so it looks its best, head to our guide to help you get the best price when you sell your phone.