Brits have 41 million festive photos on their phone they never look at, including five million snaps of Christmas trees

● More than one billion pictures will be taken over the festive season, with photos of family, friends and nights out topping the list[3]

● Only a third of people (34%) are aware of the harmful effects that storing data can have on the environment, with two thirds (68%) saying manufacturers should do more to highlight the issue[5]

● Uswitch.com urges mobile phone owners to declutter the digital baggage on their mobile phones ready for the new year.

After photos of the Christmas tree, snaps of festive weather are the second most forgotten, followed by pictures of New Year’s Eve fireworks[3].

Brits collectively take more than a billion photos in the two weeks around Christmas and New Year, including 366 million pictures of family, 204 million snaps of friends, and 146 million images of festive nights out[3].

On average, people take more than 11 photos of family, almost ten snaps of friends, almost seven pictures of their Christmas presents, nine photos of festive fireworks, and more than 12 pictures of nights out[3]. 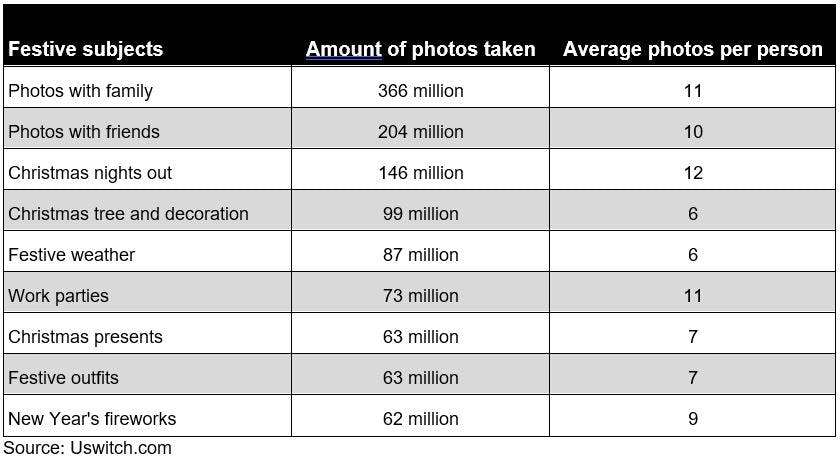 Keeping the 41 million forgotten Christmas photos in the cloud would generate 246 tonnes of CO2 emissions annually — the equivalent of 77 return flights from London to Australia[4].

Many mobile users are unaware of the environmental impact of not deleting unwanted photos, with only a third of people (34%) aware of the harmful effects of storing data in the cloud[5]. Two thirds of people (68%) say that smartphone manufacturers should do more to highlight the issue and raise awareness among customers[5].

A quarter of Brits (26%) pay for monthly cloud storage subscriptions as they have too many photos for their existing allowance[6], which costs people £3.40 a month on average[6].

More than half (52%) admit they wouldn’t need extra storage if they were better at deleting unwanted photos and apps[5], and four in ten photo hoarders (42%) say they can’t find  photos they need because their device is so clogged with unwanted or duplicate images[5].

Uswitch.com calls on mobile users to declutter their photo library and consider the environment when taking and storing so many Christmas snaps.

Ernest Doku mobiles expert at Uswitch.com, comments: “It’s easy to get a bit snap-happy when we’re surrounded by family and friends at Christmas, and we’ve all taken photos of the Christmas tree that we’ve never looked at again.

“It’s important to remember that every photo stored in the cloud has an impact on the environment, and it also affects your bank balance if you need to pay for extra storage.

“If you need to take six pictures of your Christmas tree to get one worth keeping, it may be that you’re ready to upgrade your phone camera.

“With tens of millions of festive photos clogging up our smartphones, now may be the time to clear out the ghosts of photos past and start holding on to the most important memories.”

To find out how to take better photos on your smartphone, see our helpful guide here.

Opinium surveyed a sample of 2,002 UK adults from the 10th to 14th December 2021. Results were weighted to reflect a nationally representative criteria.

1. Respondents were asked, ‘after taking the photos, how many times would you typically look at the photos you have taken?” For each category of festive photo subject, the proportion of people that answered ‘zero - I wouldn’t look at them again’ was multiplied by the UK adult population of 55.4 million. 41 million photos are taken that are never looked at again.

3. Respondents were asked, ‘thinking about a typical festive fortnight including Christmas and New Year, which of the following do you take photos of?’ and given a list of 12 different photo categories. Respondents were then asked ‘How many photos of this type would you typically take?’, the average number of photos for each category was extrapolated by the amount of people that take this type of photo and then the UK adult population. The cumulative total for festival photos was 1,307,464,930. The most popular category of festive photo was ‘photos with family’ at 365,983,480, followed by ‘photos with friends’ at 204,301,350 and ‘Christmas nights out or social gatherings’ at 146,200,600.

6. Respondents were asked, ‘Do you pay a subscription for extra storage on your smartphone (e.g. cloud storage)? If so, how much per month?’, 26% of people said that they pay for extra storage. The average cost paid for additional storage is £3.40.