Disney villains vs. princesses: Who's the most eco-friendly of them all?

Mirror, mirror, on the wall - who is the most eco-friendly of them all? Uswitch analyses the actions of Disney's most iconic characters to discover who has the most sustainable lifestyle. Find out how each character stacks up against its rival in a game of Top Trumps.
Share this guide From the minute Snow White and The Seven Dwarfs first hit our screens in 1937, Disney has brought so many iconic characters into our lives.

Disney villains have provided some forgettable moments. They've made us laugh, they've made us cry, but most importantly they've given our heroines something to fight for. With climate change an increasingly important issue today, Uswitch wanted to see how our beloved Disney characters stacked up against their rival counterparts when it came to making sustainable choices.

Taking the top 10 Disney films, Uswitch analysed the actions of each protagonist and their villain. We then provided them with a sustainability score for each category based on their behaviours. From Elsa to Ursula, let's ask the mirror on the wall who really is the most eco-friendly of them all.

The most eco-friendly Disney princesses

The most eco-friendly Disney villains

Four out of ten villains actually beat their princesses through their eco-friendly actions and lifestyles. Lady Tremaine, Maleficent, Queen Grimhilde, and Gaston all faired better than their princess counterparts. Whereas the princesses that fared better were the ones that wore less extravagant clothing and had a closer relationship with the natural world around them.

Villains vs. princesses: Who's the most eco-friendly? 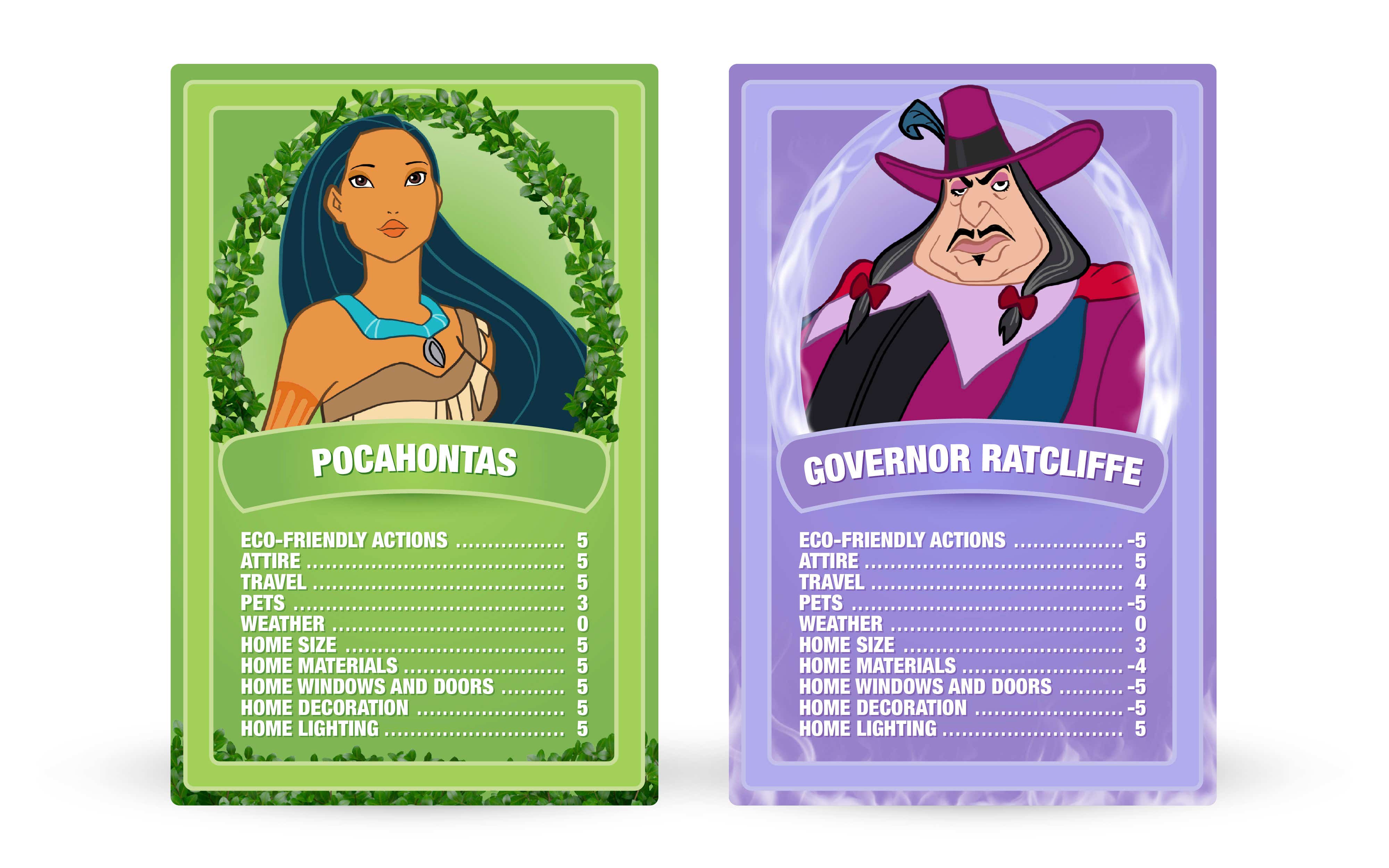 Pocahontas dominates over the other princesses when it comes to her ability to live an environmentally friendly lifestyle. She and her family are strikingly self-sufficient, often seen growing their own crops. She shows that she’s at one with nature; walking barefoot, gathering food for loved ones, and has a friendly relationship with wildlife, in particular, a raccoon that follows her everywhere.

Her nemesis, Governor Ratcliffe, fares not so well. Bombing the forest and using a pistol made of gold, his lack of care for the wilderness around him ranks him as one of the lowest scoring Disney characters for environmental impact. 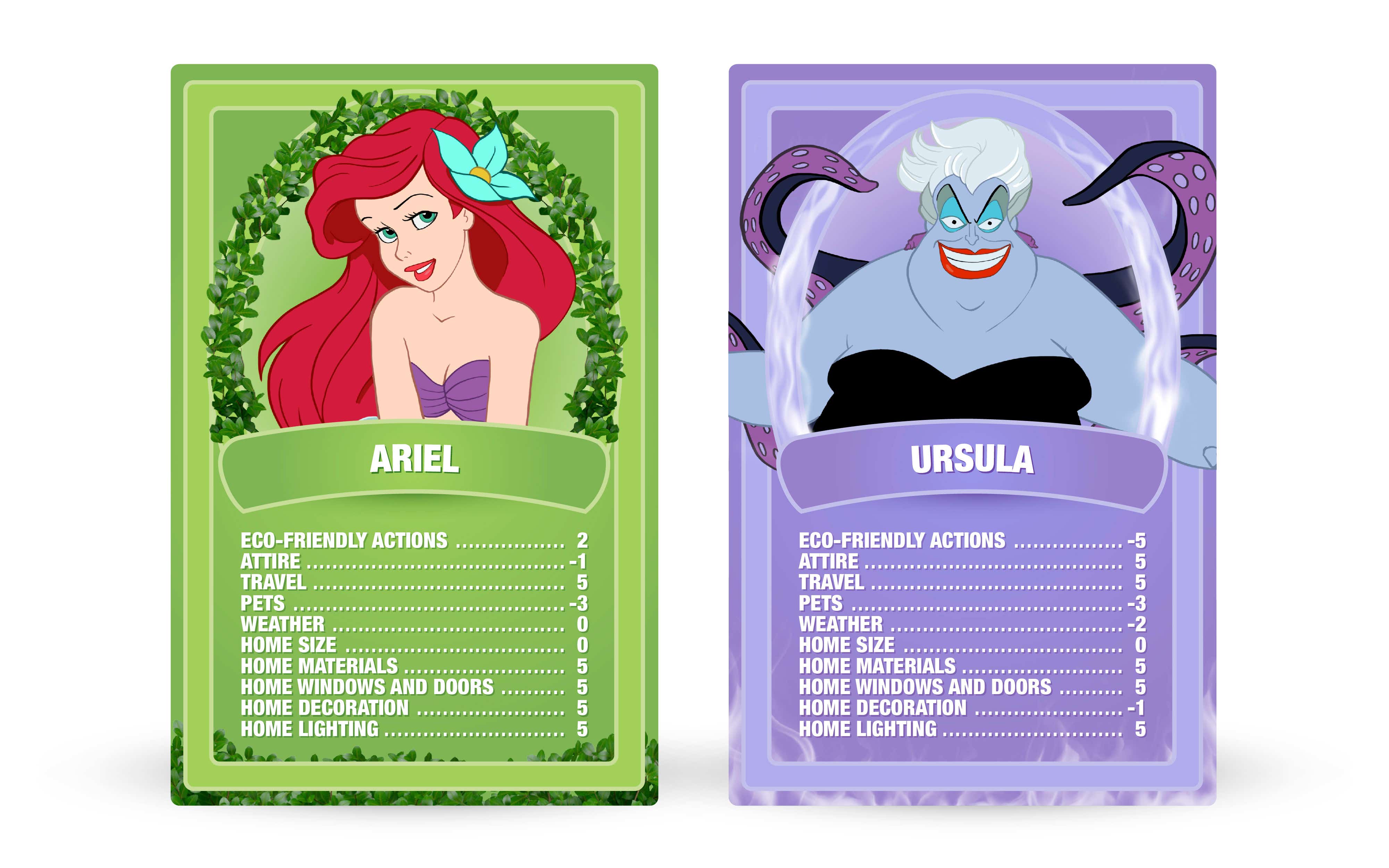 Ariel beats Ursula for eco-friendly behaviours. Some of the small actions she takes, such as using recycled items as clothing, scavenging shipwrecks for little trinkets, and riding in a horse and carriage as a human means she scores well against Urusla.

Ursula on the other hand wears heavy makeup and moisturises in the sea, polluting the area. She also discards jars, contributing to waste found in the ocean along with a smoke-emitting chimney in her lair. 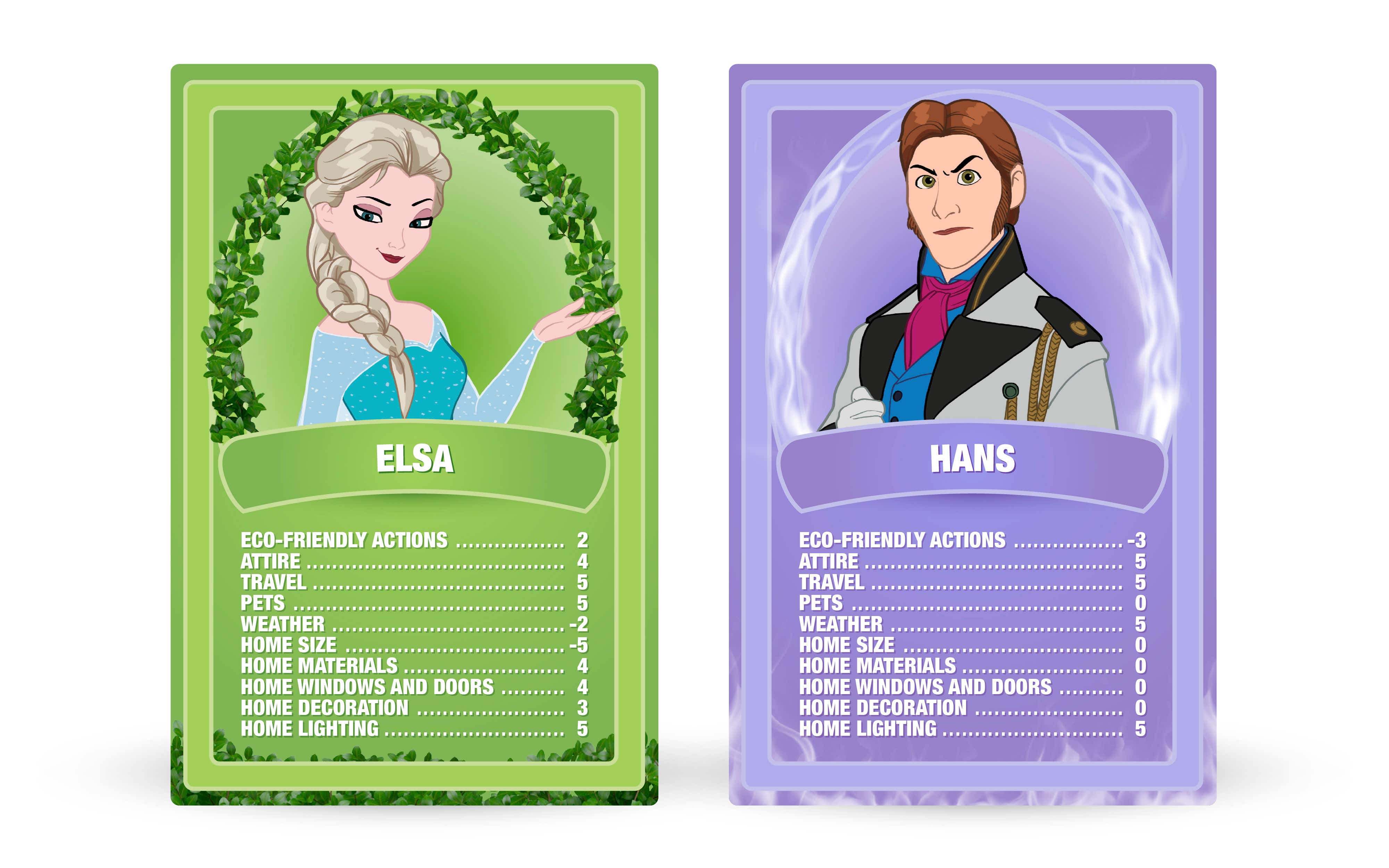 Elsa's famous saying "the cold never bothered me anyway" implies that she never needs the heating on and is in perfect harmony with the environment around her. Her clothes are magically changed meaning she never produces wardrobe waste.

Whereas Hans is one of 12 brothers which would mean excessive resources were required for their upbringing. Hans is also seen drinking champagne, an unnecessary indulgence. 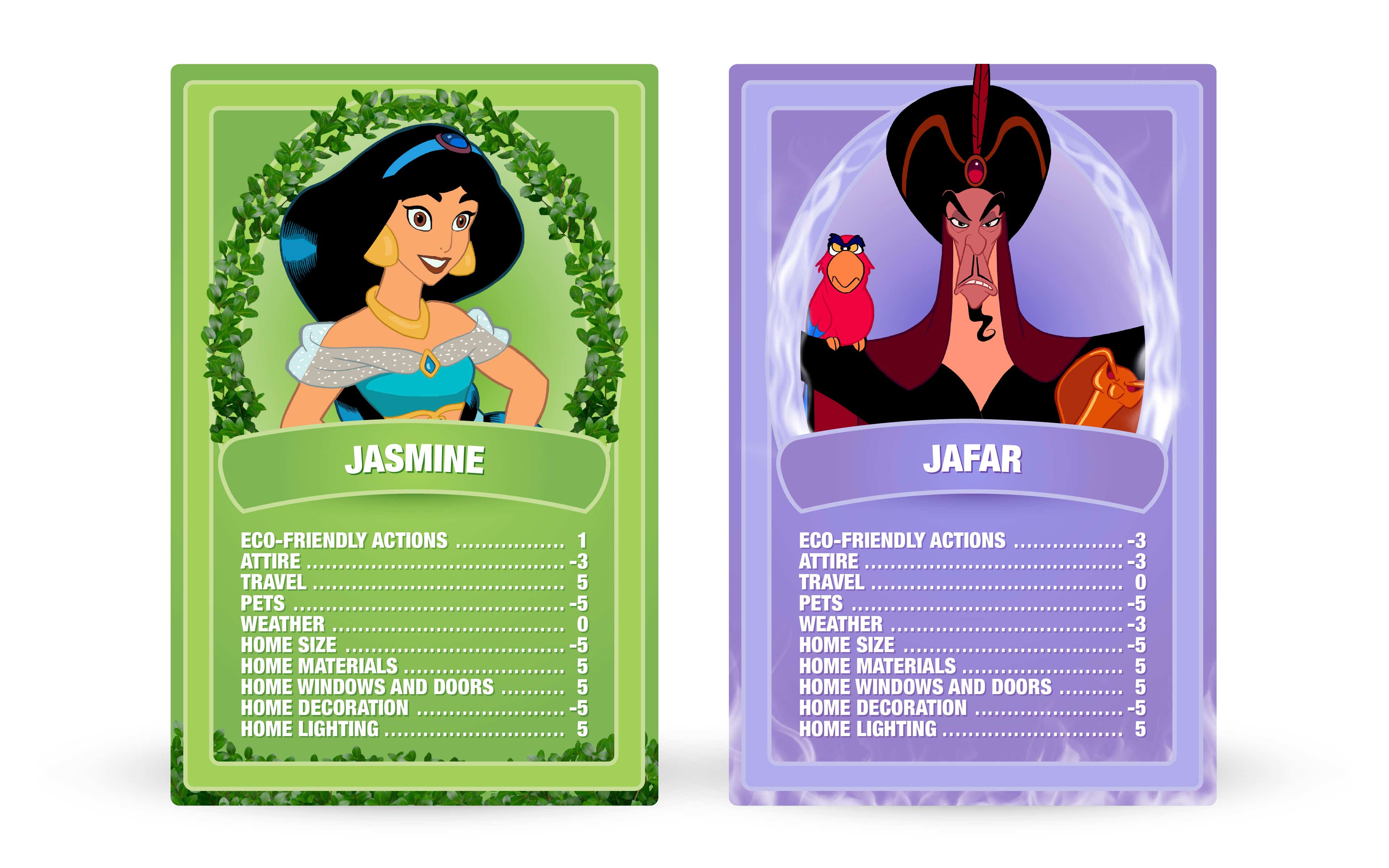 Despite Jasmine displaying more eco-friendly actions than Jafar, her home decorations set her back (huge water feature and gold decorations). However, her ability to fly a magic carpet puts her in good stead as a non-polluting means of transport.

Jafar's destruction of the eco-system negatively impacts his score. He causes an eruption in the sand by using magic at the cave of wonders, disturbing the wildlife. He shrinks a tiger down to a tiny size and when he laughs there is thunder messing up the weather patterns. 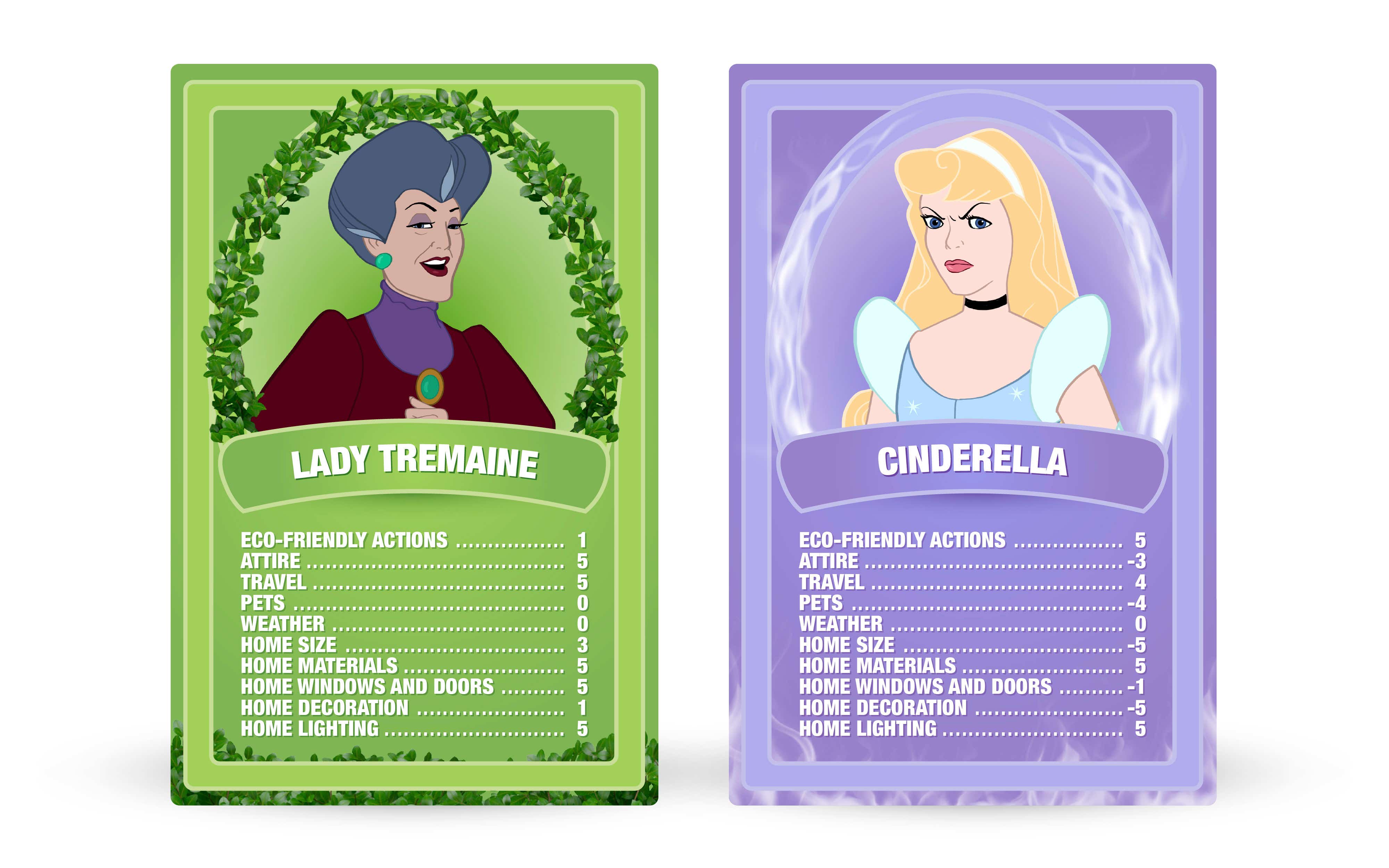 Lady Tremaine's home habits mean she trumps Cinderella in the bid to be most eco-friendly. Large, heavy curtains keep the cold out, and candles keep the areas lit. Her simple clothes which she never changes imply she's not one for fast fashion or extravagance.

In contrast, Cinderella's lavish gown and wasteful confetti at her wedding hold her back. 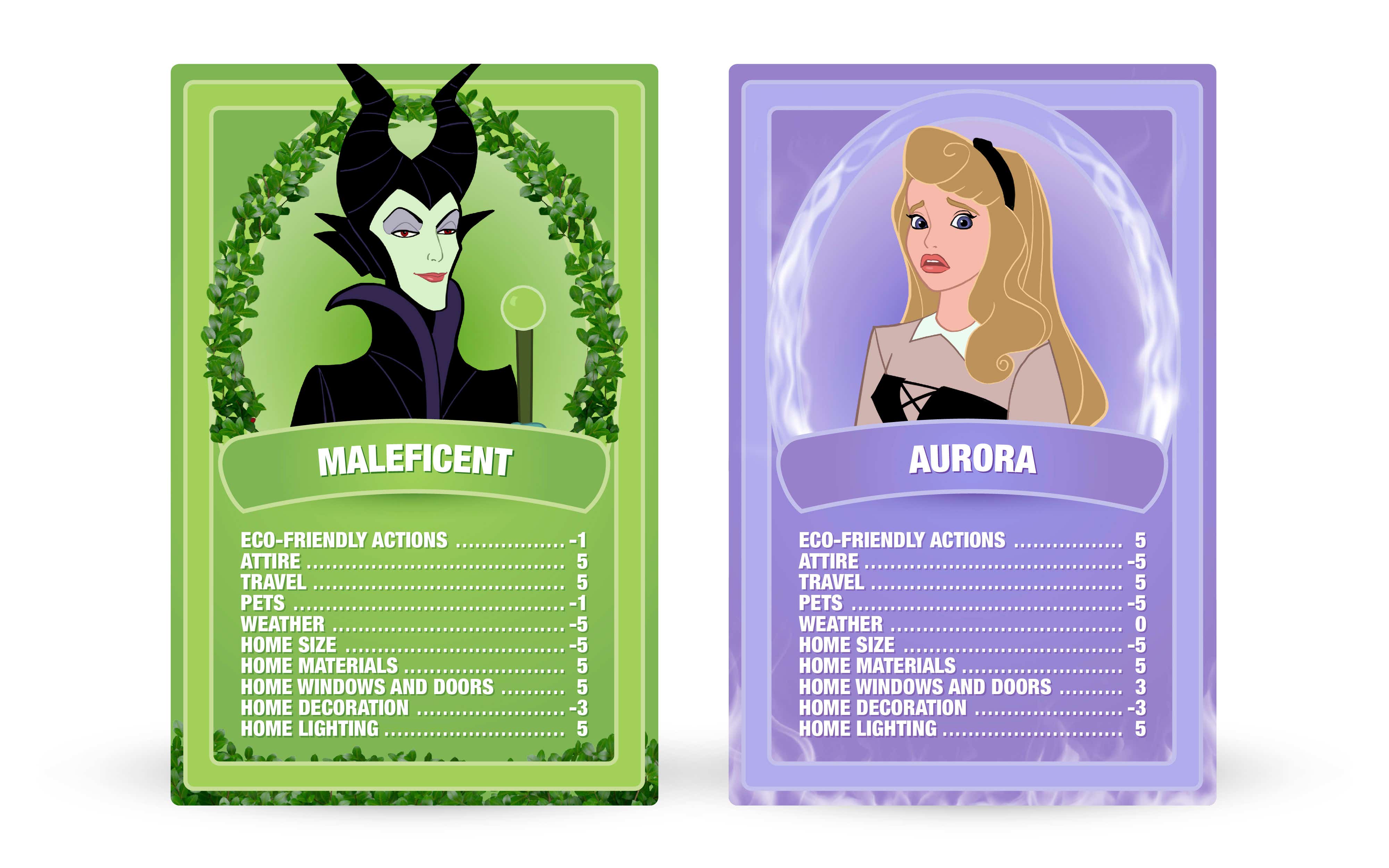 Maleficent may be the dark villain of the story, but her actions are less harmful to the planet than her sweet nemesis Aurora. Keeping her castle mostly dark, she lives a simplistic life choosing to carry a single candle for her light-source. Her preference for seclusion from the rest of the world implies that she does not rely heavily on outside resources.

On the other hand, Aurora has more of an extravagant lifestyle living in a stone-built, draughty castle.

Snow White and the Seven Dwarfs: 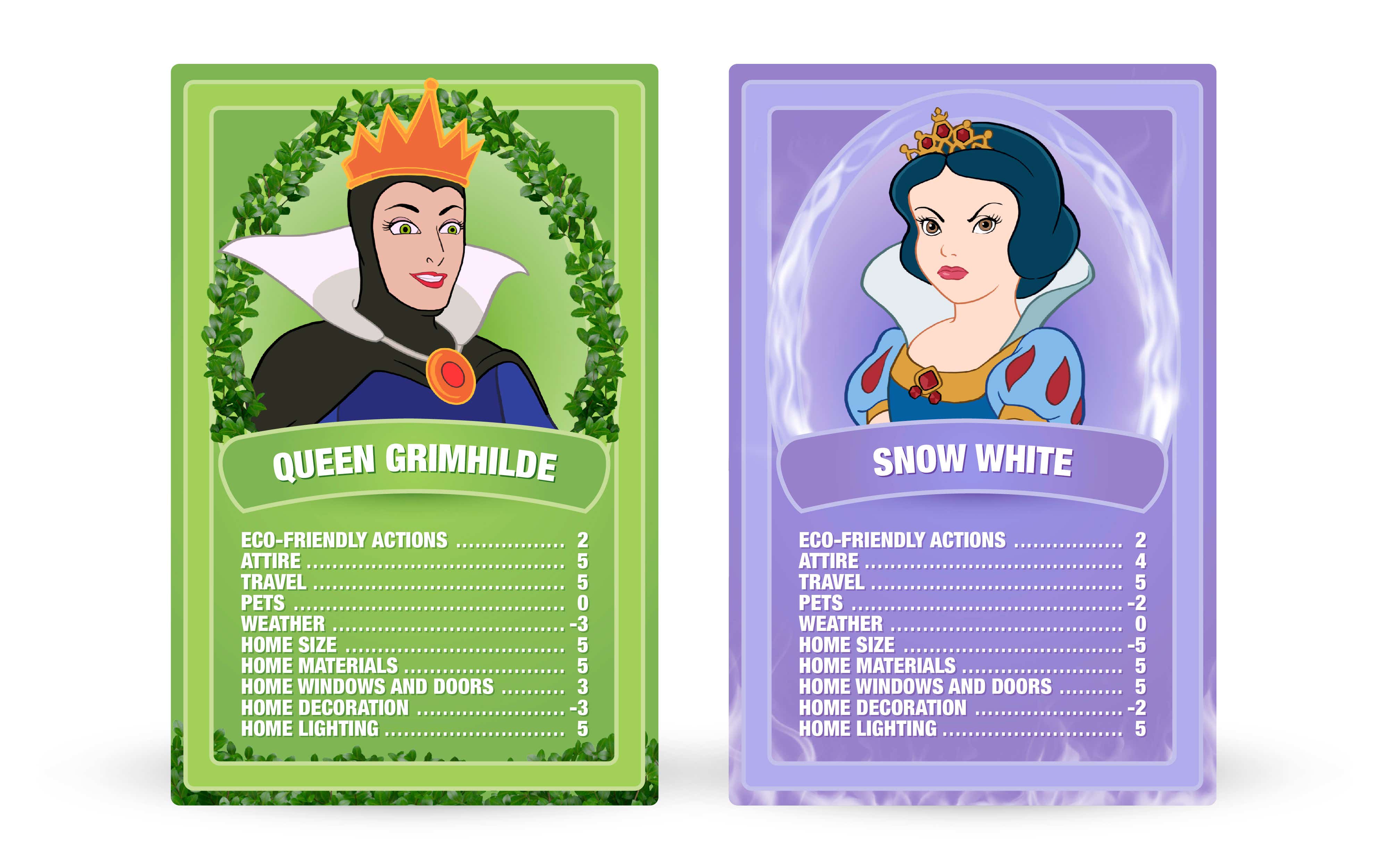 Using a wicker basket to carry her apples, wearing the same outfit over and over, and walking through the forest barefoot, Queen Grimhilde is proven the be the most sustainable of the two.

Snow White negatively affects the wildlife around her by picking wildflowers. Also, it's rather wasteful cooking seven full pies for the dwarfs. 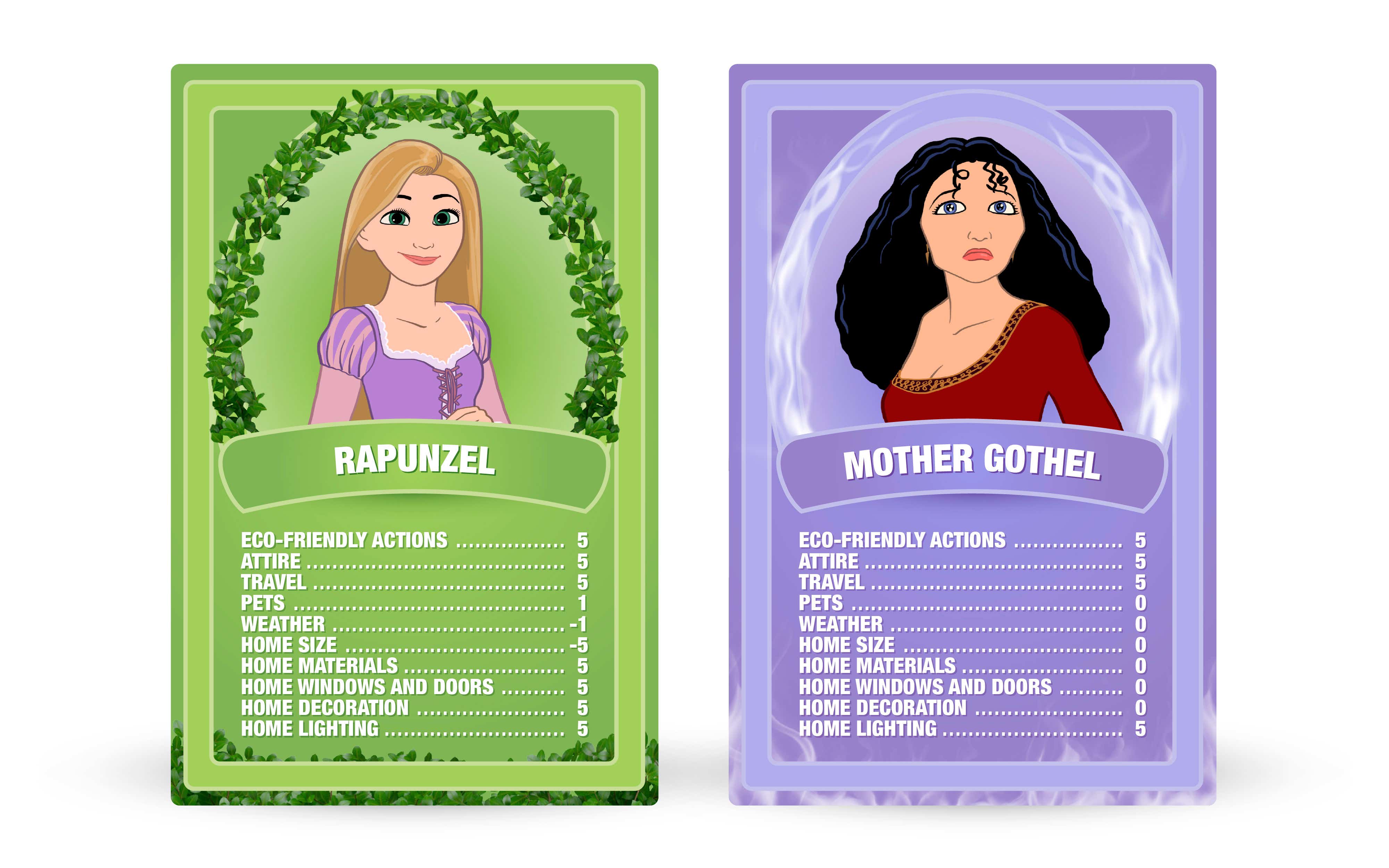 Rapunzel makes lots of positive decisions when it comes to sustainability. She uses her hair for pretty much everything including first aid, so no need for throwaway plasters/bandages. She enjoys lots of hobbies that require littler resource: Papier-mâché, crafting, ballet, making her own candles, baking, pottery, exercising, and ventriloquism. Mother Gothel displays disdain for nature by kicking away Rapunzel's pet chameleon.

The Princess and the Frog: 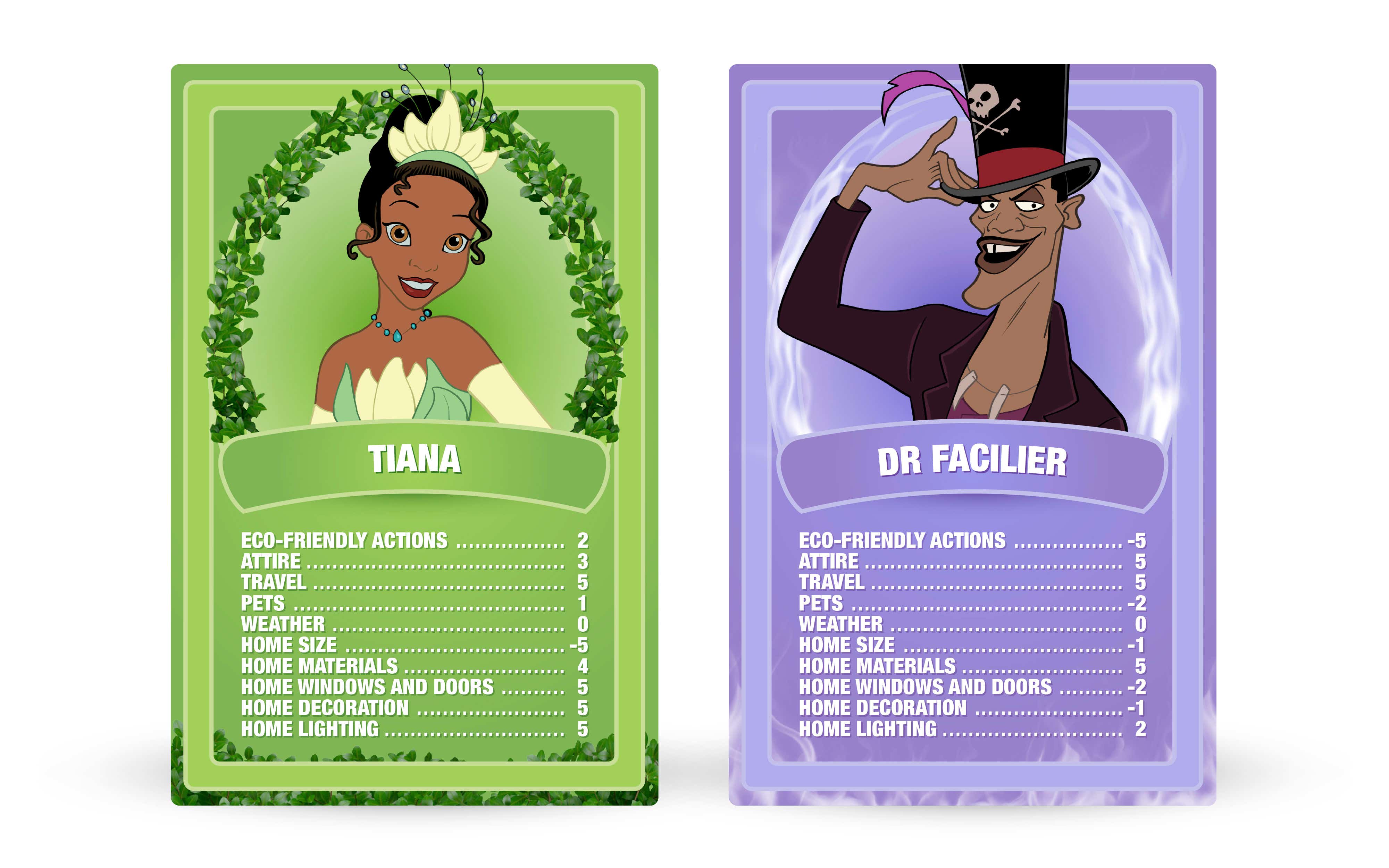 The Princess and the Frog: Tiana vs. Dr. Facilier Top Trumps cards

Resourceful Tiana reuses her father’s ‘Gumbo pot’ reducing waste. She also buys an old sugar mill to renovate into a restaurant, not building a new property. Her ability to cook what's available to her means she is only relying on what the planet can give her at that time.

Whereas Dr. Facilier also seems to have a similar dislike to animals as Mother Gothel. He's seen squashing a firefly and locking the frog in a box.

Beauty and the Beast: 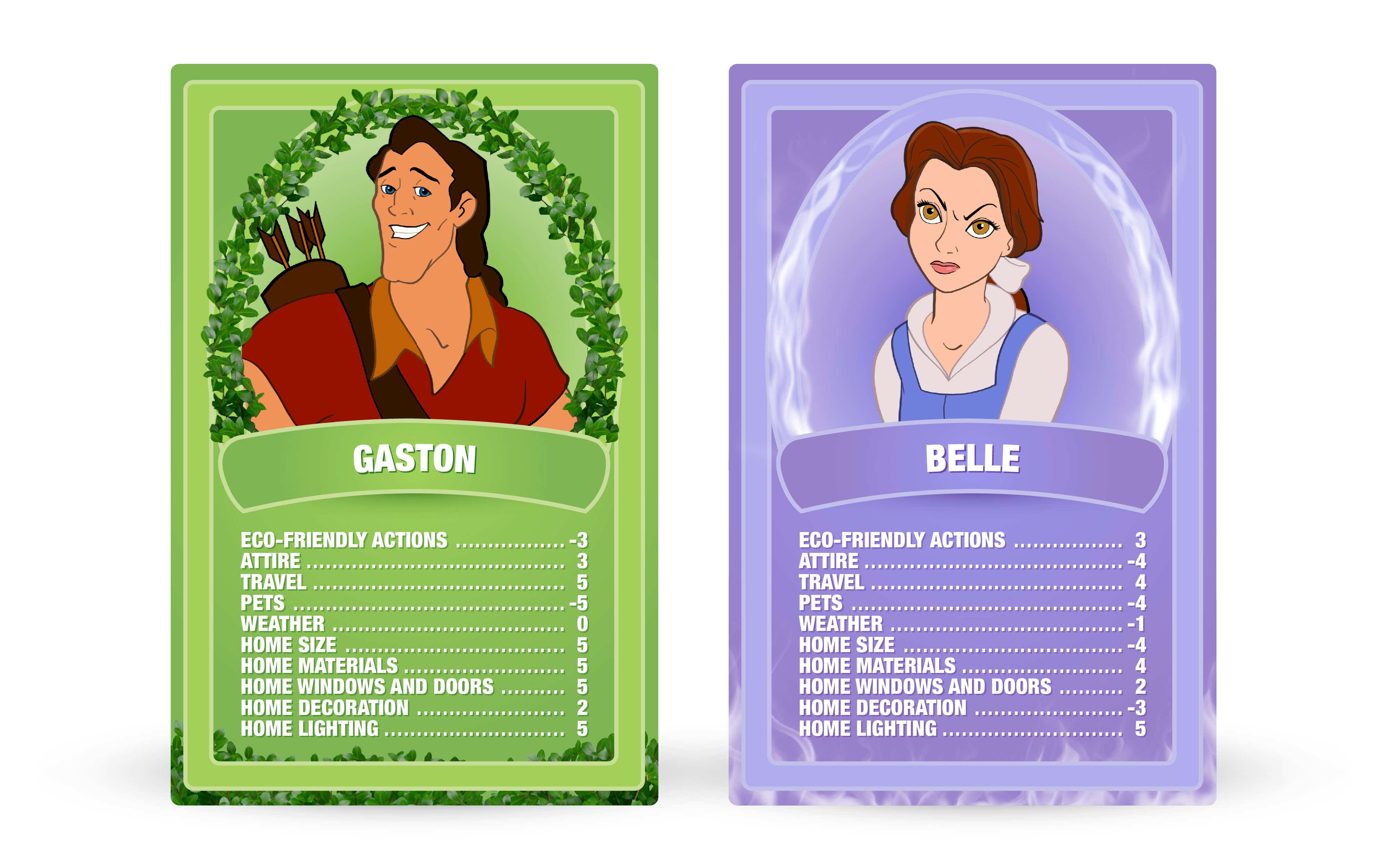 Beauty and the Beast: Gaston vs. Belle Top Trumps cards

Although Gaston is a very unlikeable character, it seems that compared to Belle he's making more of an effort to reduce his impact on the environment. As he rides a horse everywhere, he's incredibly self-sufficient and non-polluting. His old, holey socks prove he doesn't care about fashion, which leads him to be less wasteful.

Whereas Belle's outfits are luxurious which would've required many materials to make.

Overall rankings of all 20 characters 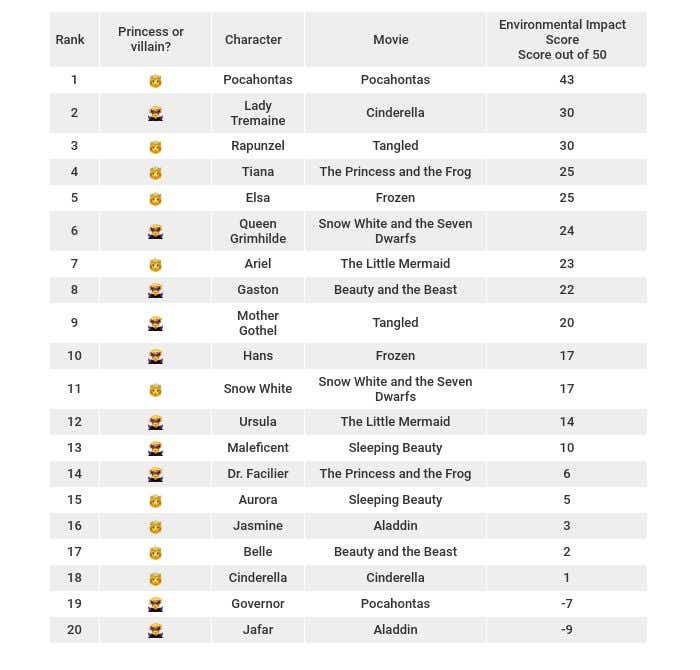 How to reduce your carbon footprint

Obviously the characters wouldn’t be as interesting if their eco-habits were consciously thought about at every action. However, as we move with the times, it's something we are all more concerned about. And although we can’t change the habits of others, we can do our own little bit for the planet.

You can see here the carbon footprint of your lifestyle and read handy tips on how to limit your impact: Carbon offset calculator. 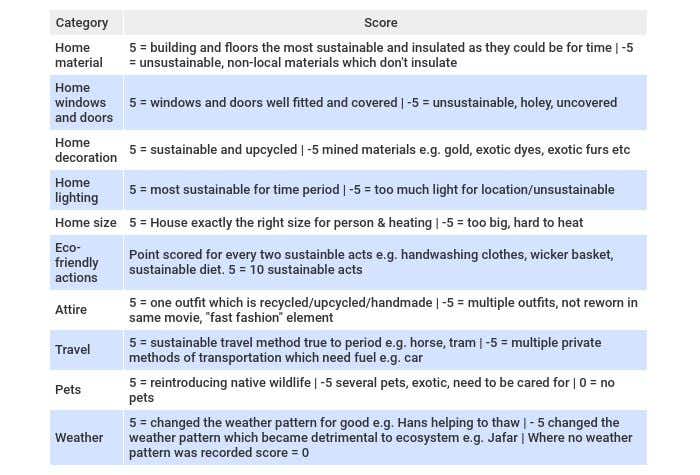