Just under seven million Brits believe they are living debt free despite owing millions, according to the first consumer debt profile from Uswitch.com, the price comparison and switching service. The research shows that while three quarters (74%) of consumers are in debt, one in five (14%) don’t realise their monthly bills, for example their car insurance or store card payments, is actually repaying money they owe.

Those in debt owe a total of £209 billion, an average of £5,688 per consumer. However, given that nearly one in five (18%) have missed a repayment within the last 12 months, millions are treading a tightrope when it comes to staying on top of their financial obligations.

Car loans are typically the biggest liability consumers have, with those paying for their car monthly owing on average £3,275. Personal loans liabilities are the next biggest outstanding debt, average of £2,982, ahead of credit cards (£1,947) and payday loans (£1,101).

The most common debt held in the UK, excluding mortgages and student loans, are credit cards (45%) and personal loans (21%). Other types include credit agreements to pay for mobile handsets (18%), overdrafts (16%) and home insurance (15%), which complete the top five debts Brits are most likely to hold. 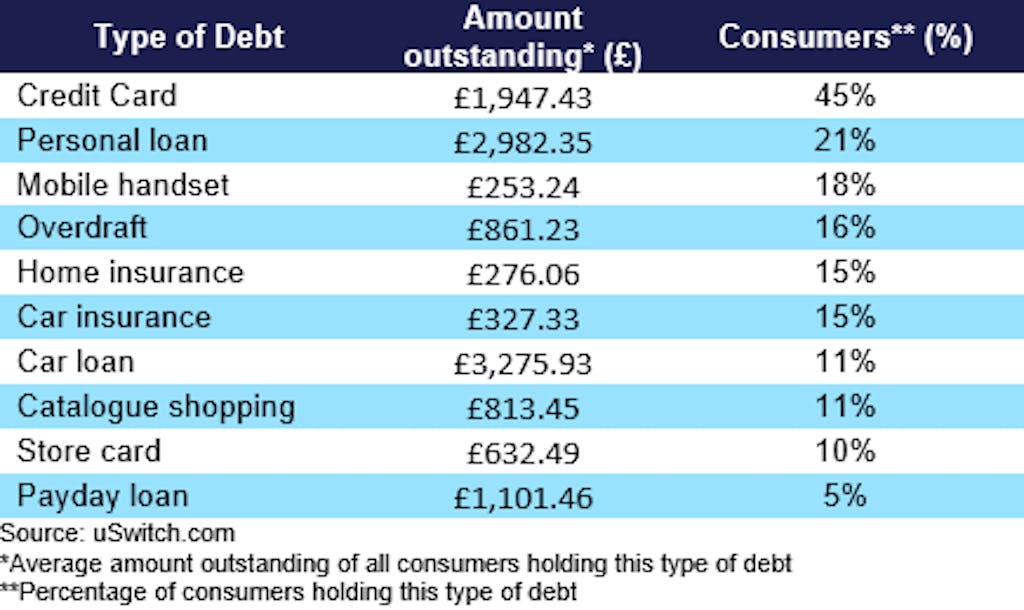 Home improvements (25%) and holidays (21%) are the main reasons for taking on debt. Troublingly the main reason for those aged 18-34 is food costs, along with improving their credit rating (both 24%). However, this doesn’t seem to be paying off, as a third in the age group (33%) have admitted to missing a repayment within the last 12 months – which can severely damage your credit rating.

With nearly a third (31%) of consumers struggling to manage their debt, and a fifth (21%) feeling compelled to lie about how much debt they have, Uswitch.com is calling on consumers to carefully consider the monthly agreements they have and ensure they are always meeting their monthly minimum repayments by setting up a direct debit or monthly bill reminder.

Tashema Jackson, money expert at Uswitch.com, says: “It’s incredible that seven million Brits believe they are debt free, but have actually signed up to a credit agreement. A lack of knowledge about what liabilities they have, combined with many struggling to manage their debts, could spell trouble ahead – especially for those who have become reliant on cheap credit to fund their lifestyles.

“The truth is that it is increasingly difficult to avoid taking on debt, especially given that premium smartphone prices are now at an all-time high and insurance costs continue to rise. However, in some cases, you may be better off using a 0% purchase credit card or taking out a personal loan to pay for them outright. Taking the time to do a little research can make a huge difference to the total debt you take on.

“When repaying your debt, it is important to do so in a responsible manner. Always make the minimum repayment, ideally set up a direct debit to take pay the bill monthly. Then, if you can, pay more than that minimum payment whenever possible as it could significantly reduce how long it will take you to pay off your debt and the interest you’ll pay.

“For those really struggling, speak to your bank and see if they can help. If you are still concerned, charities such as StepChange offer free and impartial advice to help get your debt under control.”

All research referred to was conducted by Opinium between 20th – 24th April 2018, with 2,037 nationally representative UK adults (aged 18+).