Consumers can take advantage of the great deals available on broadband and mobile contracts this January, reveals Uswitch.com, the comparison and switching service.

Providers have slashed prices on SIM-only and pay-monthly phone contracts as well as many broadband packages, making it a great time to save for customers out of contract.

For those looking for a new handset, one of the top pay-monthly deals is on the iPhone 13 128GB, with ID Mobile offering unlimited data, calls and texts on its 24-month contract. The £37.99-a-month deal includes £29.99 upfront for the handset. 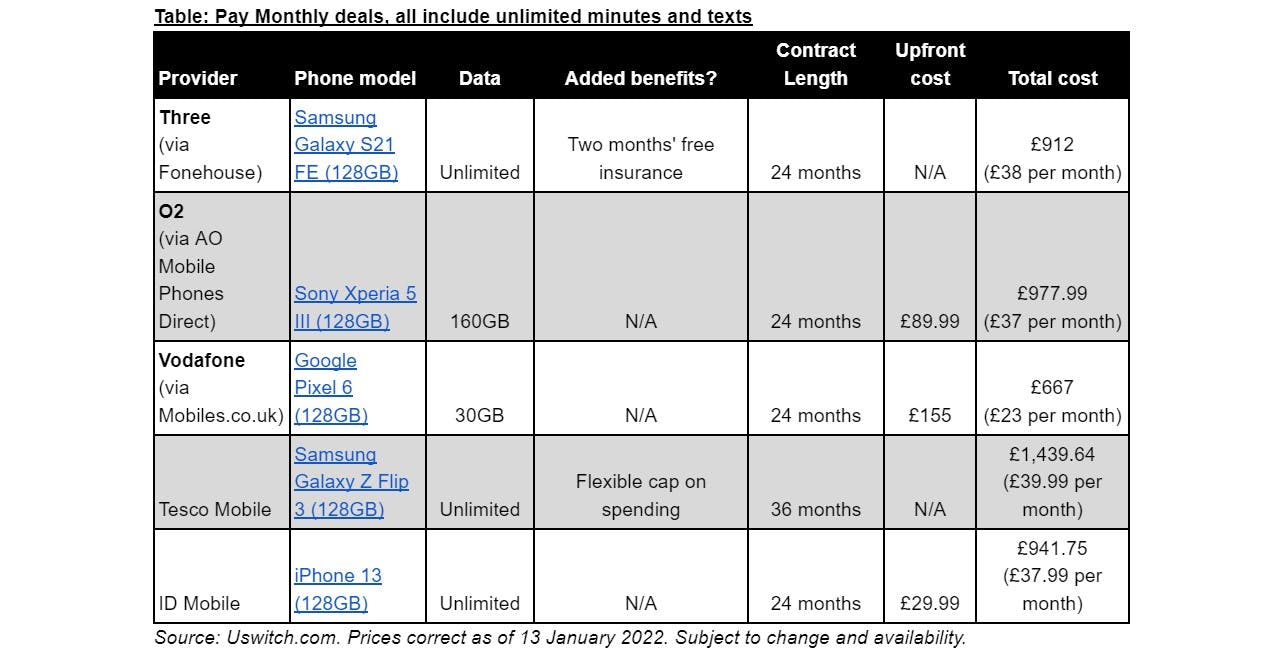 Those out of contract but happy to keep their handset can find savings and generous data allowances on SIM-only deals. For £6.95 a month, Lebara offers 10GB data, unlimited calls and texts, reduced to £3.47 a month for the first three months with the Uswitch exclusive deal.

And big data users can get 250GB with an O2 SIM-only offer on a 24-month contract for £22 a month. The deal, which closes on February 2, is half price for the first six months, saving £66, and includes a six-month subscription to Disney+.

More than seven million consumers are now out of contract with their broadband providers[4], costing them £849 million a year[5], making now the perfect time to get a new deal.

Broadband users can get Vodafone’s 67Mbps Superfast 2 package for £20 a month, a deal which ends on January 27. The 24-month contract comes with a £90 gift card for Amazon, Tesco, M&S or Sainsbury’s.

Virgin Media’s M100 Ultra Fast Fibre, clocking in at speeds of 108Mbps, is £25 a month with an exclusive Uswitch offer, ending January 31.

Meanwhile, Three is offering an alternative to the standard fixed-line connection through its mobile broadband hubs. The 5G version has an average download speed of 100Mbps and is £21 a month on a 24-month contract.

Uswitch urges anyone out of contract with their mobile or broadband provider to run a comparison online to ensure they’re not overpaying for their service or due an upgrade.

Ernest Doku, telecoms expert at Uswitch.com, comments: “There are some impressive broadband and mobile deals to be had right now, so if you are out of contract, it’s a great time to shop around.

“If you’re unsure when your current deal comes to an end, check the original documents you should have received upon signing up.

“Many broadband users will have found their need for fast and reliable Wi-Fi has increased during the pandemic through home working and might want to upgrade to a deal that offers higher speeds.

“With models like Apple’s iPhone 13 or Google’s Pixel 6 at affordable prices it’s easy to get drawn in by a good-looking deal. Always assess your personal needs for a mobile package before jumping in, as you don’t want to find yourself overpaying for data or storage you’re not using in the long run.

“If you’re happy with your current handset, SIM-only deals are a great option when looking for ways to keep the monthly costs down.”

To find out how to save money on your broadband bill, see our helpful guide here.