Brits will spend £2 million a week using desktop fans to keep cool as the first heatwave of the year arrives — but the two million households with an air conditioning unit[1] face a £60 million weekly bill[2], according to Uswitch.com, the comparison and switching service.

The cost of keeping cool has risen more than 60% in the last year as energy prices have rocketed.

For the almost four million households that use desktop fans, it costs less than 2p a week to run for the two hours they are used in a typical week, and 62p for hotter weeks.

Of the two million with air con, over 840,000 households have built-in units that can consume up to 2.7kW. In a typical week, households use their units for almost three hours[1], but when temperatures are high, they use them for four hours 18 minutes on average during the day and four hours 48 minutes at night, sending the cost soaring from £2.05 a week to £48.15 a week[2].

Another one million homes have portable air condition units that use 1kW of power[1], using them for almost two hours a week at a cost of 50p. During hot spells, this bill rises to £2.55 a week — an increase of 400%.

These households could save significant sums by using a desktop fan which uses 35W on average, just 1% of the power used by built-in air condition units, dramatically cutting energy bills.

This means that air con users who switch to a desktop fan could reduce their energy bill by 99% — saving themselves £48.13 a week[2]. 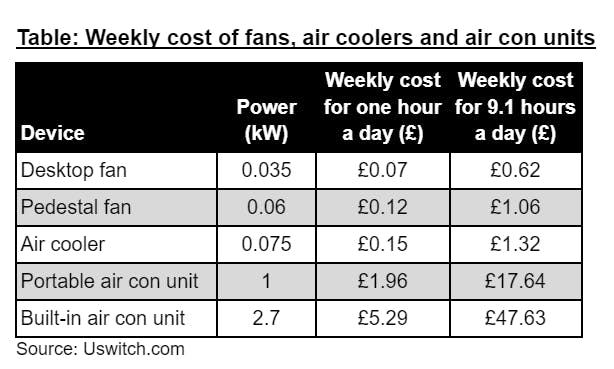 Uswitch.com is offering tips and tricks for staying cool and saving energy.

1. Create a cooling breeze: Place a bowl of ice cubes in front of an electric fan  to create a refreshing breeze as it blows the ice-cooled air around the room.

2. Close the curtains: Keep your curtains shut during the day. It may be tempting to let the light in, but the sunshine will heat the room, turning your home into a greenhouse.

3. Unplug the tech: The gadgets plugged in your home produce heat, including those that are on standby. Unplug them when you are not using them to keep the room cool.

4. Take advantage of the daylight: Switch the lights off during daylight. Lightbulbs release heat causing a room to get warmer, so turning them off can help reduce the overall temperature. With the sun setting late in the evening during summer you can keep the lights off for longer and the room cooler.

Will Owen, energy expert at Uswitch.com, comments: “We’ve all got used to the fact that staying warm is more expensive than ever, but the same is true of keeping cool as we enter the first heatwave of the year.

“Many people working from home won’t have a perfectly chilled air-conditioned office, but there are a few things that you can do to keep their home cool.

“While air conditioning units are an effective way to keep a room cool, they consume a lot of power and could bring about a nasty surprise when the next energy bill arrives.

“With high energy prices, it's important to keep energy bills down even in the summer months.”

Research conducted online by Opinium, 29th April to 3rd May 2022, among 2,000 UK residents, weighted to be nationally representative.

2. Opinium surveyed a sample of 2,001 UK adults from the 9th to 11th June 2020. Results were weighted to reflect a nationally representative criteria. Average air con owner uses the device for 4.3 hours a day and 4.8 hours a night = 9.1 hours.