Every football season sees fans around the globe cheering on their favourite team. But which club is your country searching for the most?
Share this guide 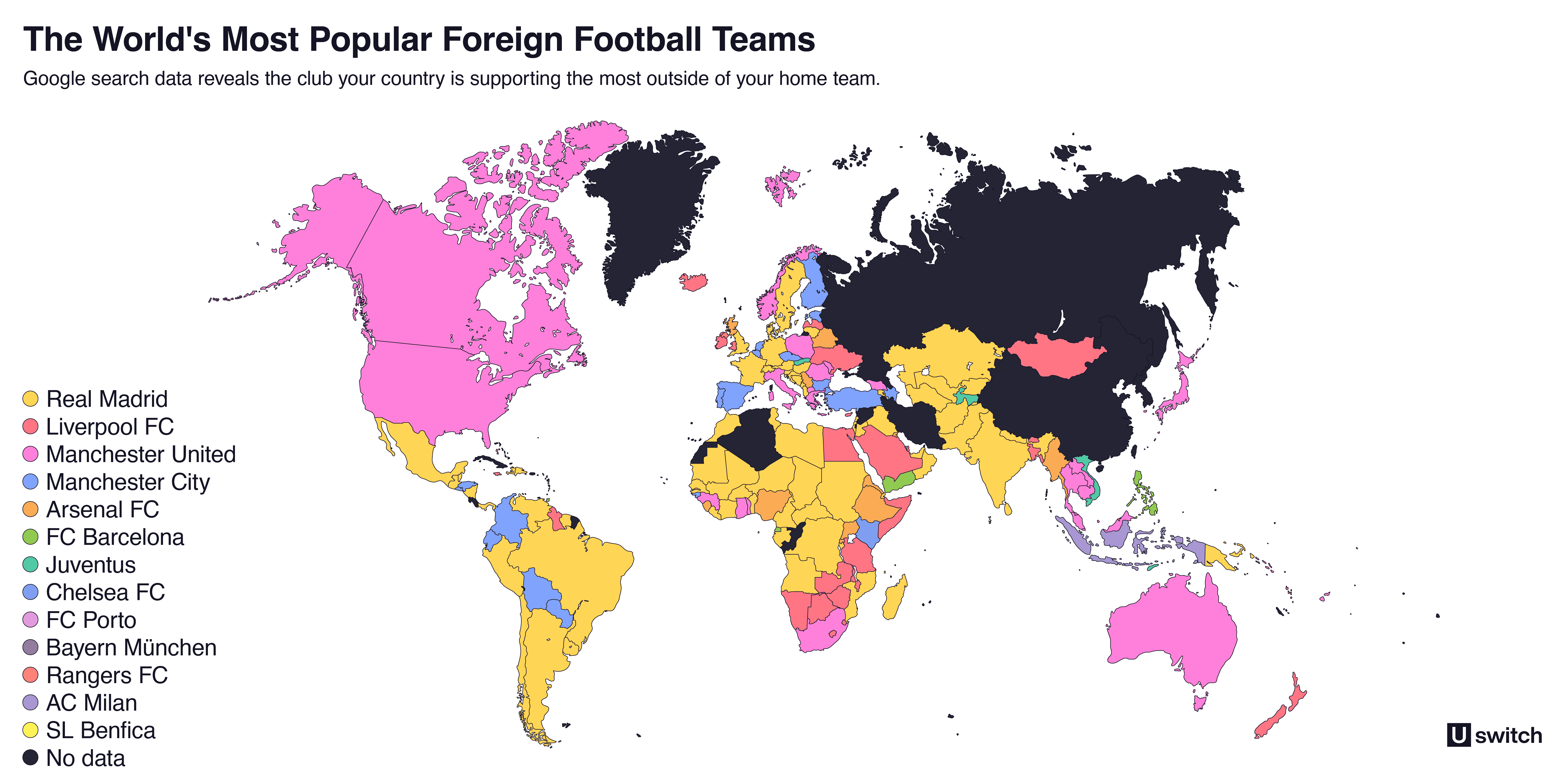 Thanks to the many fast broadband deals on offer, you can now watch live sports from the comfort of your home without the worry of poor picture quality, buffering or glitches.

Whether you only watch football when your national team is playing, or you love the sport so much you want to watch any (and every) game out there, there’s no denying that most people have a favourite team.

If your broadband makes streaming live sports difficult, remember you can browse a range of broadband offers using our comparison tool, which will help you finda service that can cater to all your streaming needs.

There are so many iconic football teams in the world. So, to reveal the world’s most searched teams, the TV and broadband experts at Uswitch analysed Google search data to discover which football teams people are Googling the most in (almost) every country around the world.

The most searched foreign football teams in the world

The iconic Spanish team, Real Madrid CF, is revealed as the most popular football team in the world when each country’s local teams aren’t included. Our research shows it is the most searched foreign football team in an impressive 75 countries, the most of any football team, including the United Arab Emirates, Israel, Sweden and Austria.

Real Madrid CF is the most successful European football franchise of the 20th Century, following its creation by a group of football fans in Madrid in 1902. Originally called the Madrid Football Club, the club is now so successful that it has won 35 top-tier national league titles and 14 European Cups, as of May 2022.

The second most searched team is Liverpool FC, being the most popular foreign team in 34 countries around the globe. Among the 34 countries showing support for the England-based team are Ukraine, Cyprus, Namibia, Malta and New Zealand.

Third on the list is a major rival of Liverpool FC, Manchester United, which is the most popular foreign football team in 27 countries. As a club, it has signed and produced some of the most iconic footballers in the world, including David Beckham, George Best, Wayne Rooney and Cristiano Ronaldo. Also known as “the Red Devils,” Manchester United FC is the number one foreign club in countries including Japan, Greece, Cambodia, Norway, and Australia.

Manchester City is fourth and is revealed as the number one club for 20 countries altogether, including The Netherlands and Portugal. And Arsenal FC rounds off the top five most Googled clubs, as they are the most searched team in 13 countries, including Scotland, Uganda and Kuwait.

Four of the top five in the global ranking are England-based football clubs, with first-place Real Madrid CF being the only non-UK team in the top five. But only one other UK club features in the top 10. Chelsea FC is joint eighth (with FC Porto) claiming the crown in two countries: Saint Lucia and Kenya.

The most searched foreign football teams in Europe 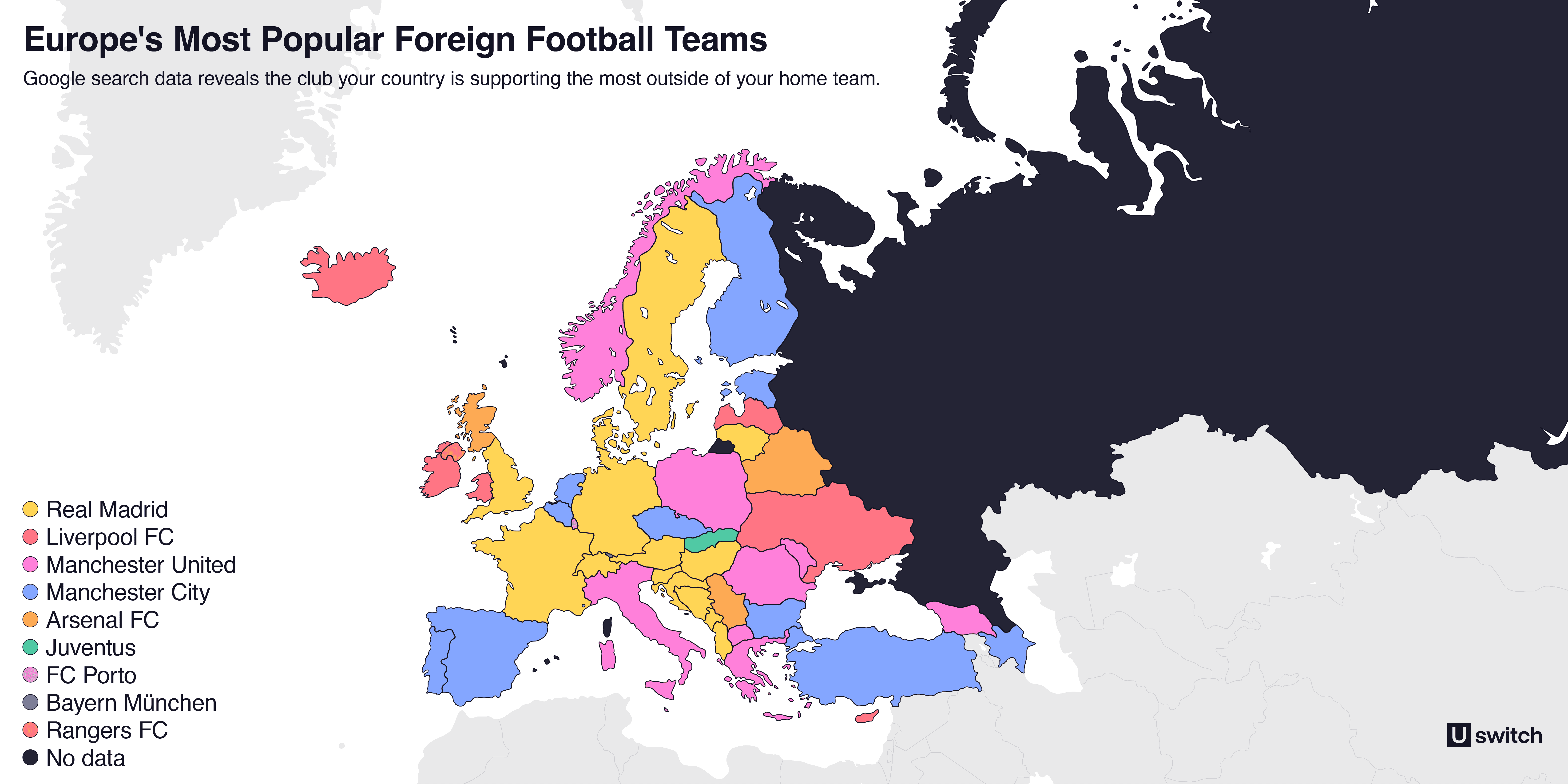 Europe’s top team is also Real Madrid CF, coming out as the most searched club in 15 European countries, including France, Croatia, England and Austria, to name a few.

The big support from France may have a connection to the many French players at Real Madrid, such as Karim Benzema, who is regularly dubbed as one of the best forwards of his generation. The same goes for Croatian supporters who may be cheering on Luka Modrić who also plays for Real Madrid.

Liverpool is fourth with seven countries, including Wales, Iceland, Ukraine and Ireland. Arsenal and FC Barcelona are the joint fifth as they come out on top for two countries each, followed by the German-based Bayern München, Scottish team Rangers FC and FC Porto are all revealed as the most searched clubs in one country each.

The most searched foreign football teams in Africa 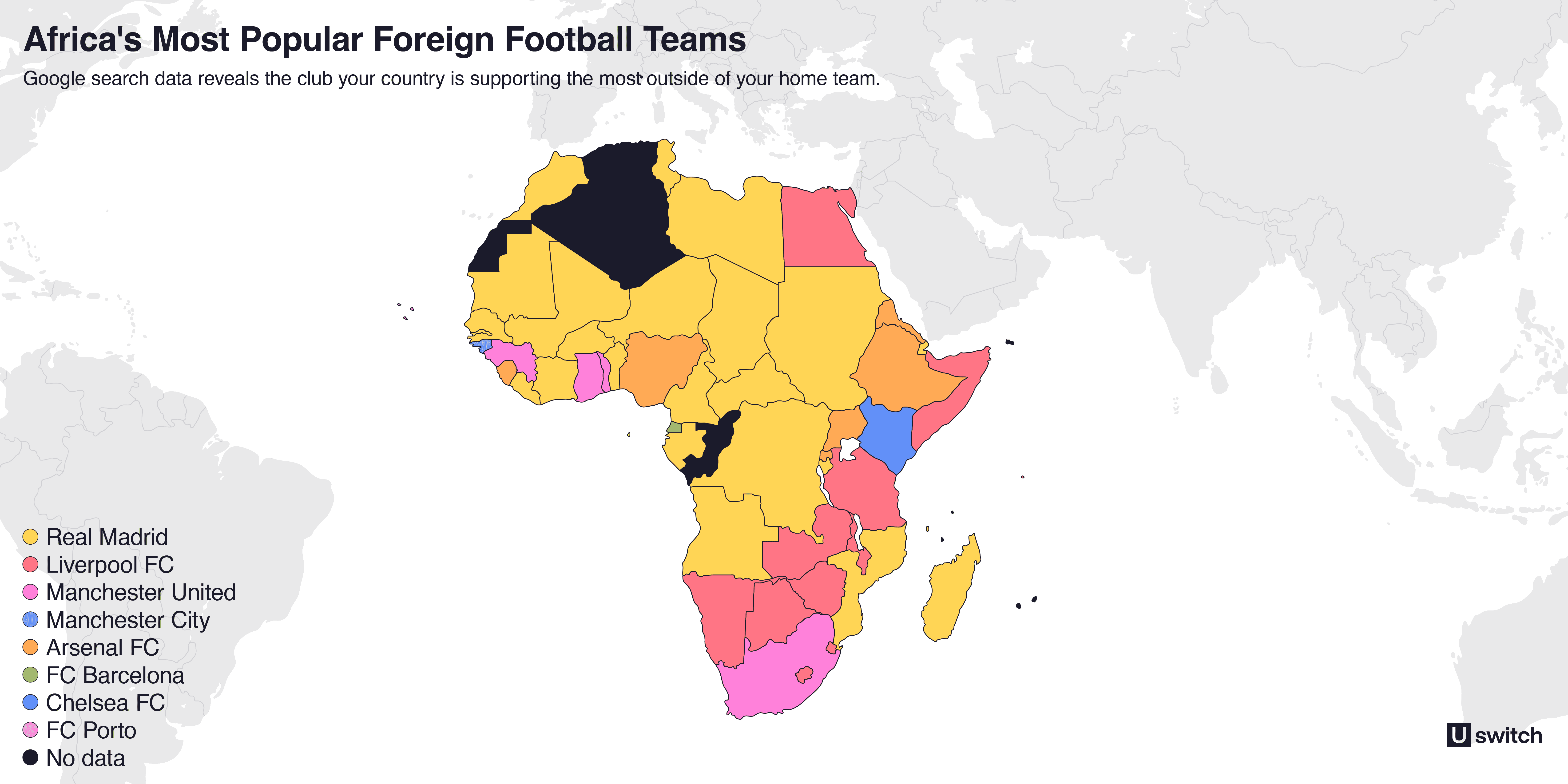 Once again, Real Madrid CF tops the table, being the most searched team in 23 African countries. The countries most interested in the Spanish club are Madagascar, Senegal, Morocco and Mozambique.

Unlike the previous lists, the second-most searched team goes to Liverpool FC, thanks to 11 countries searching to watch their games more than any other club. Among the countries supporting “the Reds” are Seychelles, Namibia, Malawi and Zimbabwe. Interestingly, Zimbabwe’s interest in the club may have recently piqued since the half-Zimbabwean prodigy, Isaac Mabaya, signed his first professional contract for them in September 2021.

Arsenal takes bronze when it comes to the most Googled football teams in Africa, thanks to Sierra Leone, Rwanda, Uganda, Ethiopia, Nigeria and Eritrea all searching for them more than any other club. The London-based club is closely followed by Manchester United, which is revealed as the favoured team in five African countries, including South Africa and Mauritius.

The rest of the list is made up of clubs that are most loved in just one country only. FC Barcelona is Equatorial Guinea’s favourite foreign football team, Manchester City is most favoured by Guinea-Bissau, and Sao Tome and Principe’s most popular club is S.L. Benfica. Meanwhile, Chelsea FC is the most Googled team in Kenya, and Cabo Verde’s number one team is FC Porto.

The most searched foreign football teams in Asia 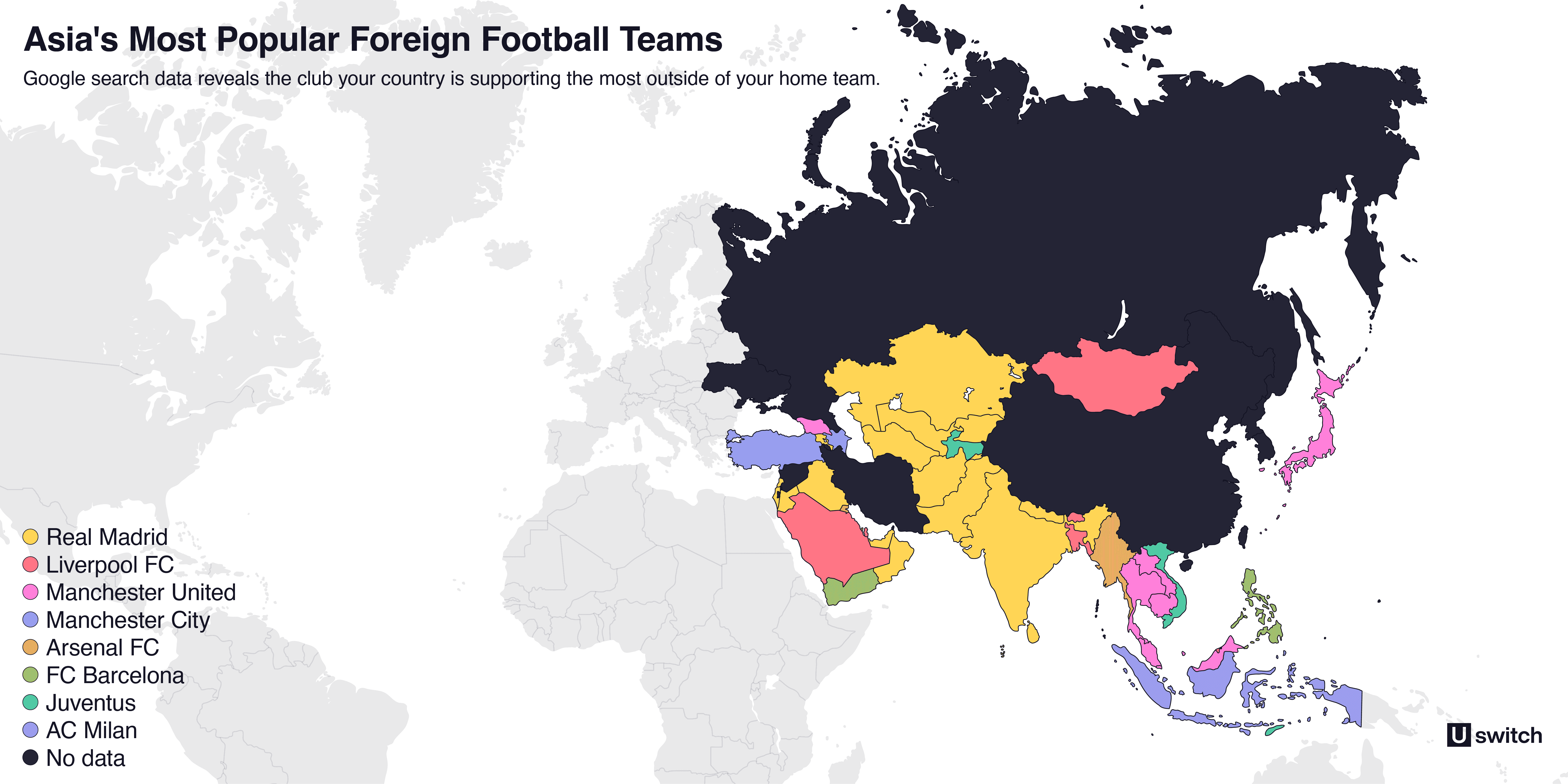 Real Madrid CF is the most Googled football team in 19 countries around Asia, including Nepal, Sri Lanka, India and Oman. Many football fans in Asia may have a particular interest in Real Madrid following the news that right-winger Gareth Bale may be transferring to Jiangsu Suning in the Chinese Super League.

Liverpool FC is the next most popular club in Asia, coming out as the most searched club in six countries: Mongolia, Bhutan, Saudi Arabia, Brunei, Qatar and Bangladesh. Interestingly, support for the team has become so strong that the franchise has opened up six stores across the continent over the last five years.

Manchester United is the most searched club in Japan, Cambodia, Laos, Thailand and Malaysia. It may come as no surprise that the club is among the most popular in Asia, as “the Red Devils” have had some great moments in recent times and even won two FIFA tournaments in Japan, attracting the attention of the many fans in Asia.

The most searched foreign football teams in Central and North America 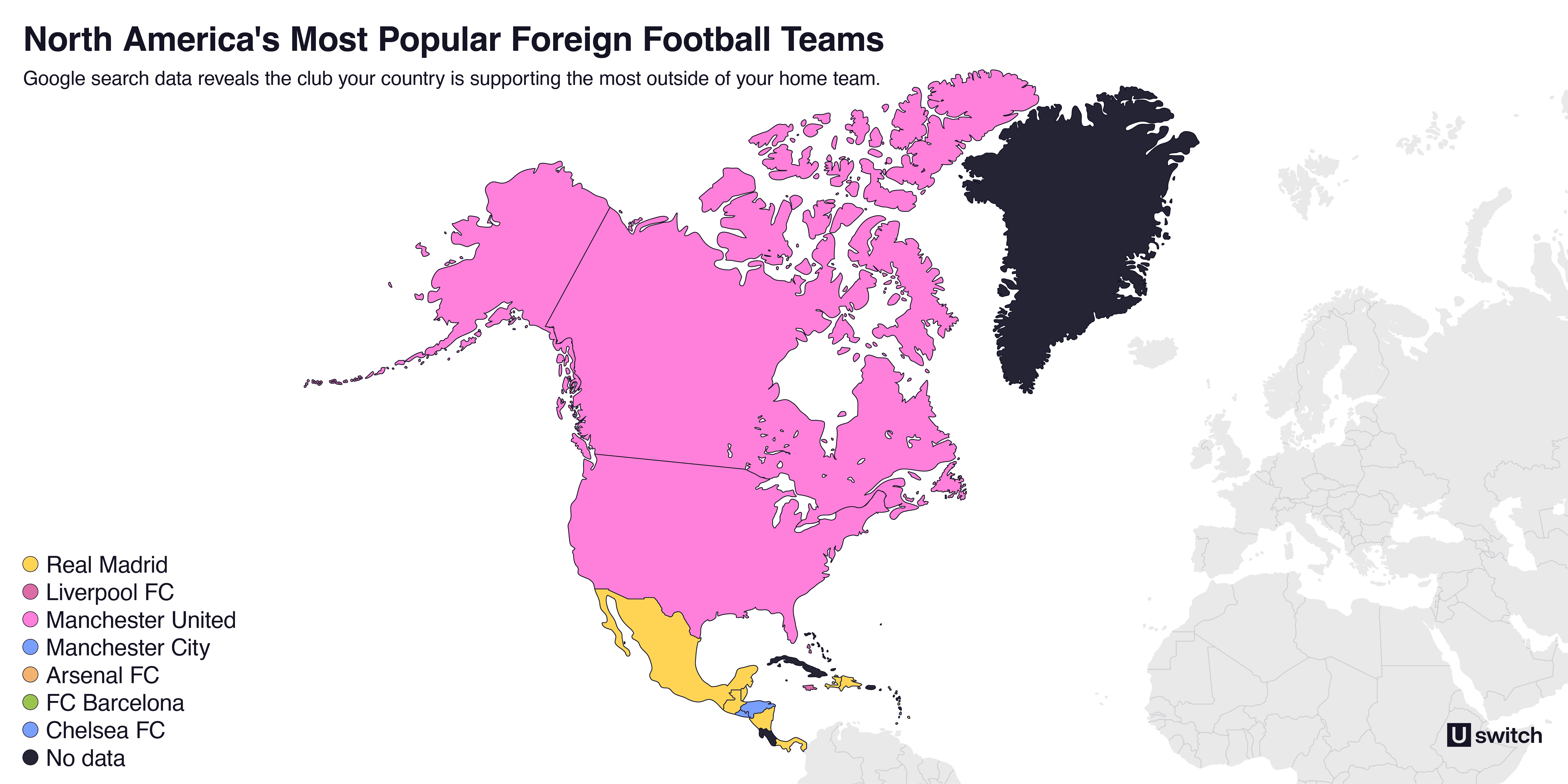 Real Madrid CF also dominates in North America. It’s the most Googled club in nine countries, including Mexico, Guatemala, Barbados, Panama and Belize. Many Mexican players have played for Real Madrid since it was founded, such as José Borbolla who played in 1944/45, Hugo Sánchez who was at the club for seven years, and more recently, Chicharito who was there in 2014/15.

Manchester United is the second-most searched football team in the continent, being the number one team in Canada, the USA and Saint Kitts and Nevis.

Head of PR for Manchester USA United Supporters Club, David Herman, has addressed the fact that, because the club can afford to showcase the most famous players of any given generation, people either love them or they hate them.

Joint second is Liverpool FC which takes the crown in Bahamas, Jamaica, Antigua and Barbuda. Notably, John Barnes, who is half-Jamaican was one of the first men of colour to ever sign for Liverpool FC, which gained a lot of lifelong supporters for the club in the late 1980s.

Dominica searches for Arsenal FC more than any other club, while Chelsea FC is the number one club for Saint Lucia. 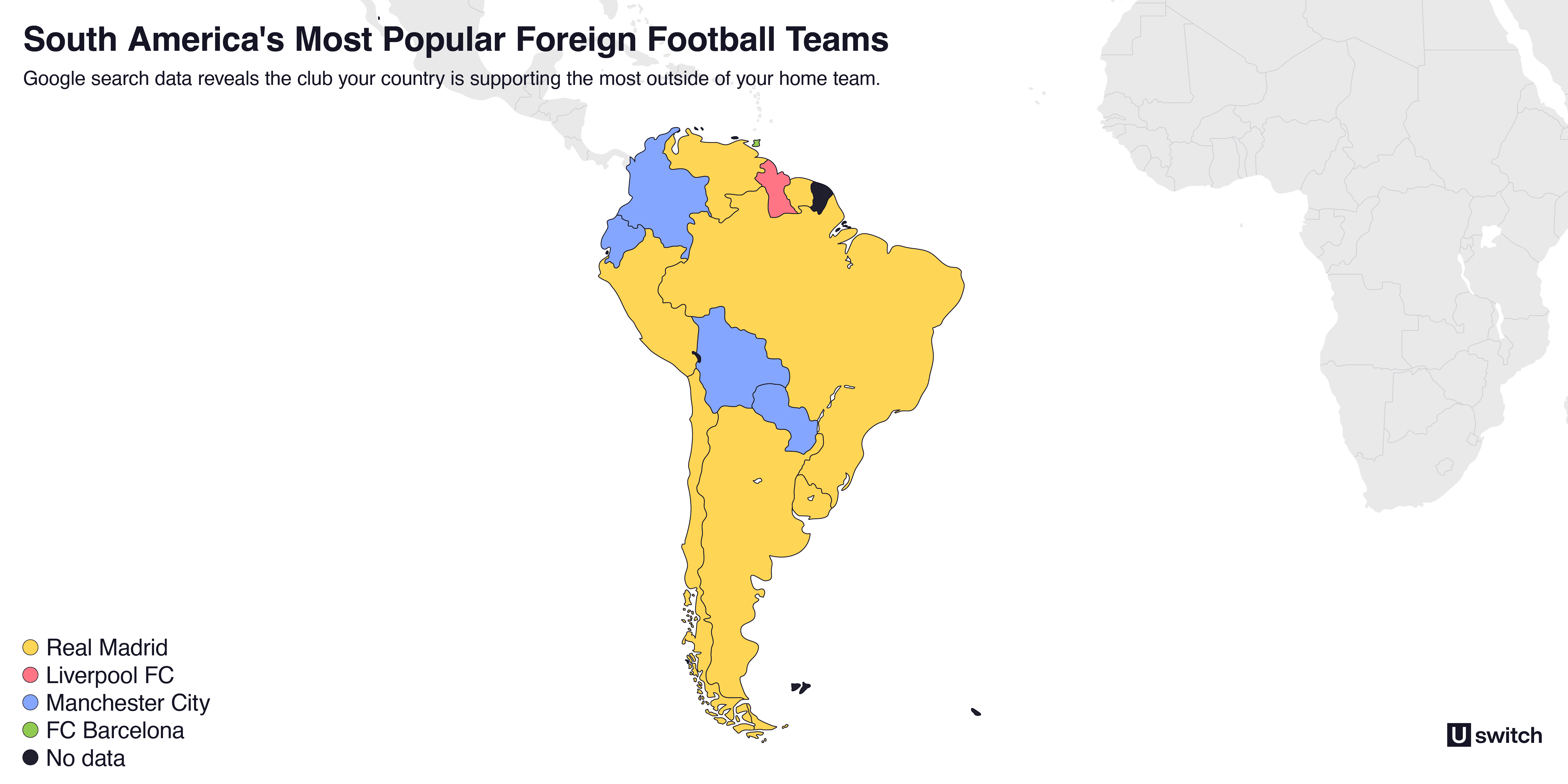 Uruguay, Suriname, Argentina, Venezuela, Chile, Peru and Brazil are the countries showing Real Madrid the most attention, once again, making it the most popular foreign football team in yet another continent.

Manchester City is the most searched team in four South American countries - Paraguay, Bolivia, Ecuador and Colombia - making it the second-most searched club on the continent. Felipe Caicedo is one of the most famous Ecuadorians to play for Manchester City, scoring seven goals in 34 games, which could be the reason for this country’s increased interest in the team.

The other team to feature in the most popular football teams list in South America is Liverpool FC, which is the top team in Guyana.

The most searched foreign football teams in Oceania 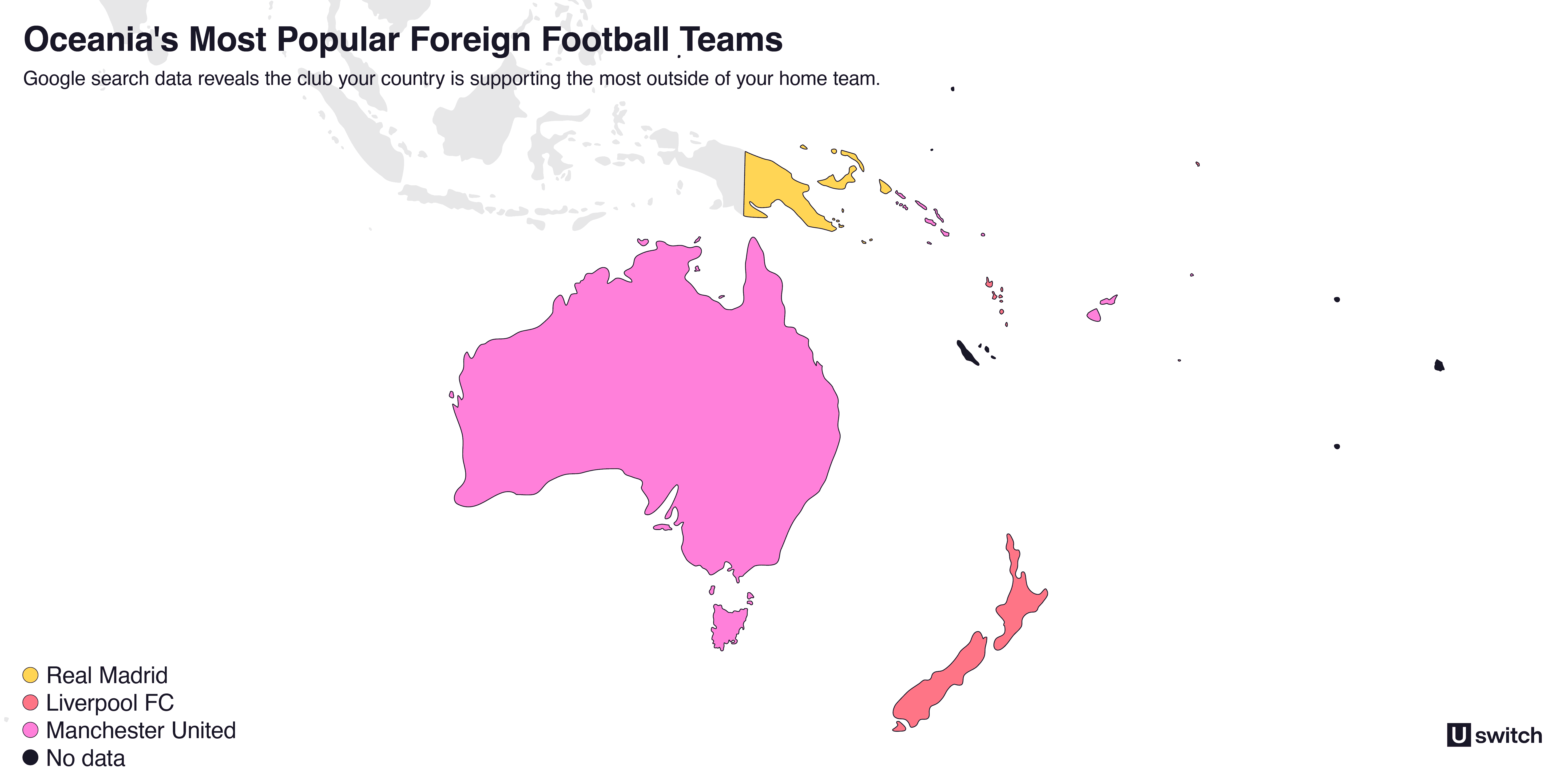 Oceania is the only continent where Real Madrid CF isn’t the top team (although it is the favoured team of Papua New Guinea) as Liverpool FC beats them to the top spot instead.

“The Reds” are the number one team in Tuvalu, Vanuatu, Tonga, Kiribati and New Zealand. New Zealand’s support for the team is so great that the Official Liverpool Supporters Club of NZ was founded over 20 years ago in 2001. It was given Official Status in 2002, where fans from all over the country can come together and share their love for the Liverpool squad.

The only other team to feature in Oceania’s most Googled football teams list is Manchester United, which is the most searched for in Samoa, Solomon Islands, Fiji and Australia.

“The world of sport has always been a way for people to come together and share their love for their team, and indeed, the game itself.

“We love that through the power of a great broadband deal, somebody in Australia can be cheering on Liverpool FC, while fans in England gear up to watch Real Madrid.

“If you regularly rely on your broadband to stream live football, make sure you have the best broadband deal for you that offers fast speeds at an affordable price. There’s nothing worse than sitting down to stream a big game with your friends and having to deal with endless buffering or your Wi-Fi signal cutting out.”

Using Google Keyword Planner to analyse monthly search volumes for 150 football teams in nearly every country around the globe, we removed the football team native to the country to reveal which foreign team is the most supported. Teams analysed were the top 150 sourced from: https://footballdatabase.com/ranking/world/1

Only official football team names were searched to ensure we were getting clear search intent. E.g. Manchester United, Chelsea FC

How can I stream football games?

Although the internet has made live sport more accessible than ever, there are some things you need to be aware of before streaming a game. If you are streaming (watching films, TV, or live sport) content through an unauthorised source (for free and paid-for) then you are streaming it illegally.

To access legitimate sports content and live streaming from a variety of Premier League matches in the UK, please visitwww.premierleague.com/broadcast-schedules.

Can I use a VPN to watch football?

Although using a Virtual Private Network (or VPN) to add extra security to your online data is perfectly legal, meaning you are less likely to be at risk of being hacked for your data, it is illegal to use a VPN to unlock content that is specifically not available within your own country. Accessing your favourite sport should always be done through an official streaming service, such as BT Sports, Sky Sports, etc

What are the risks of illegally streaming sports?

If you access illegal content, from watching your favourite films to streaming a sporting game, using a modified box, FireTV Stick or through an unauthorised website or another illegal source, you are committing a crime. By doing so, you are putting yourself at risk of being exposed to dangerous malware and/or the risk of fraud and data theft. This risk increases significantly when you input credit or debit card information to view content on unregulated and pirate-run websites.

Additionally, watching content via an unauthorised source can expose younger viewers to explicit advertisements and age-inappropriate content. Unlike most legal sources, these unauthorised websites, devices, apps, add-ons and the content they can access have no effective parental controls.