The European capitals with the highest density of EV charging stations

With several major countries pledging for their cars to go all-electric by 2040, our Electric Vehicle (EV) charging team has analysed data to reveal which European capitals have the highest density of EV charging stations.
Share this guide 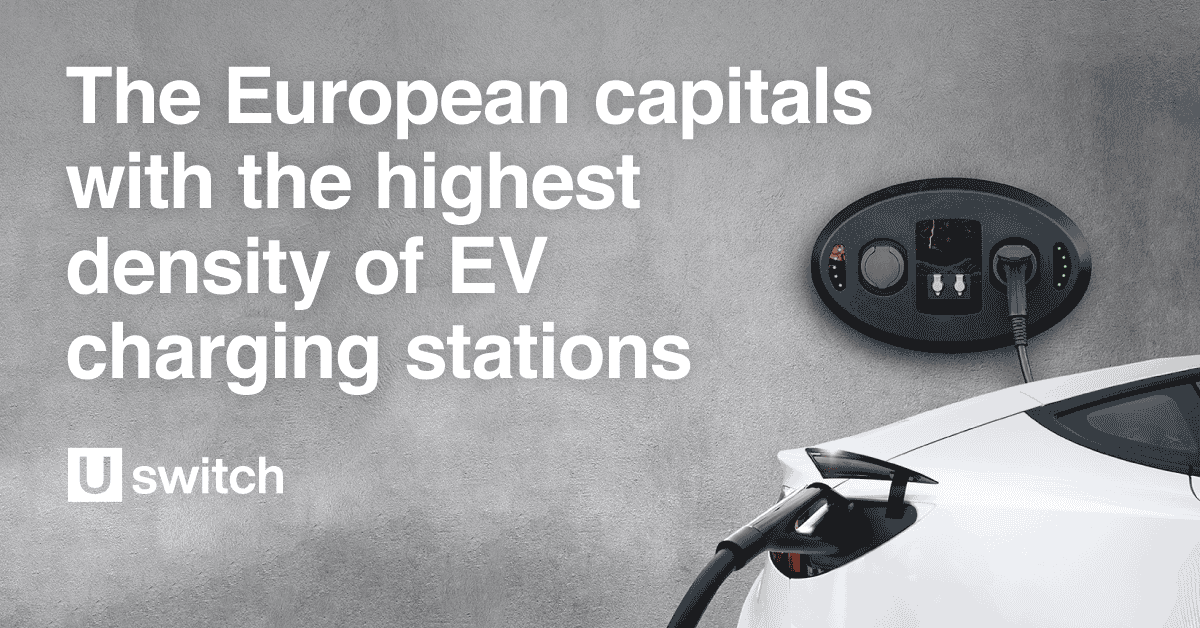 The widespread publicity of the environmental crisis has led to an increased demand for eco-friendly transport. Electric vehicles have soared in popularity in recent years, with a report from the International Energy Agency finding that global EV sales doubled between the years 2020 and 2021.

While this is undeniably good news for the planet, the fact remains that more work is required if we are to successfully tackle the problems posed by climate change. This fact was a key theme of the United Nations’ Cop26 summit, which saw several leading countries pledge their commitment to ensuring that their cars go all-electric by 2040. But if these ambitious pledges are to be met, do we have sufficient electric car charging stations to accommodate them?

With this in mind, the EV charging experts at Uswitch conducted a study on 31 capital cities across Europe to find out which places had the highest density of electric car charging points.

The 10 European capitals with the highest EV charging density 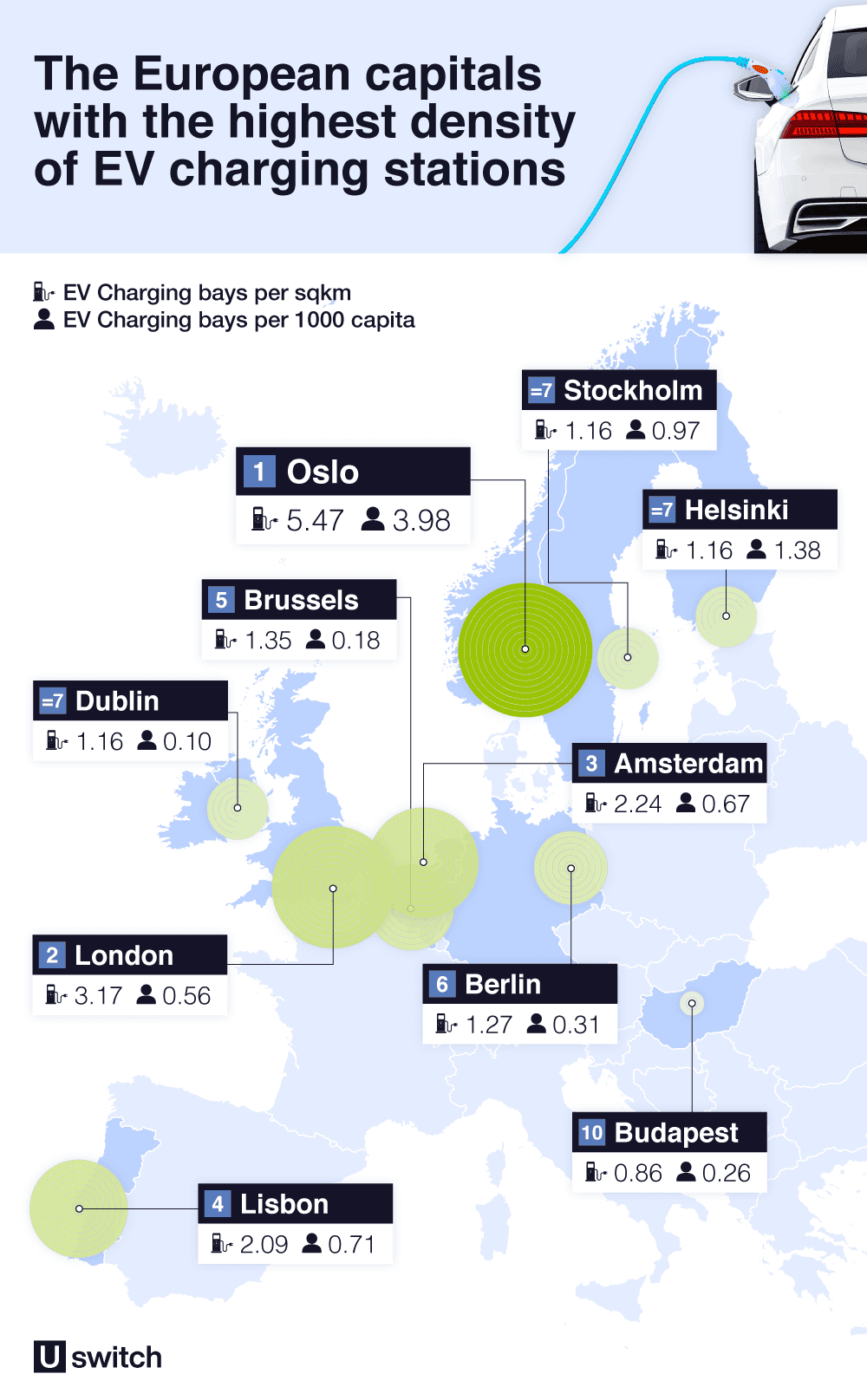 It has a stellar reputation for sustainability and energy efficiency, so it’s no surprise to find a Scandinavian city at the top of our list. With a study best score of 5.47 chargers per square kilometre, the Norwegian capital of Oslo was found to be the European capital with the best EV charging density. Oslo was also found to be the city with the highest number of electric charging points per 1,000 capita, with a score of 3.98 placing it far ahead of the other capitals in our study.

With an impressive total of 4,991, second-placed London holds the distinction of being the European capital with the most EV charging bays. Despite having more than double the charging stations of Oslo, London’s EV charging bays per square kilometre score of 3.14 left it some distance behind the Nordic city.

A city renowned for its artistic heritage and hedonistic spirit, Amsterdam can now add EV sustainability to its long list of attributes. Despite achieving a higher charging bays per 1,000 capita score than London, the Dutch capital’s EV charging points per square kilometre total of 2.24 meant that it had to settle for a third-place finish.

The Portuguese capital of Lisbon narrowly missed out on our top three with a score of 2.09 for EV charging stations per square kilometre. Despite ranking lower than Amsterdam and London, the city nicknamed ‘The City of Light’ was found to have more electric charging points per 1,000 capita than both the Dutch and English capitals.

With a total of 220 charging bays across 162.5 square kilometres, Brussels takes the fifth spot in our study. A city renowned for its association with the European parliament, the Belgian capital is setting an example to the rest of the continent with its impressive charging bays per square kilometre score of 1.35.

The remainder of our top 10 is comprised of Berlin, Dublin, Stockholm, Helsinki, and Budapest. With an electric charging points per square kilometre score of 1.27, Berlin finished just behind Brussels in sixth place. The German capital was followed by Dublin, Stockholm, and Helsinki who all finished joint 7th with a score of 1.16 for EV charging stations per square kilometre.

Rounding off our top 10 is Budapest, which became our second central European entry thanks to its charging bays per square kilometre score of 0.86. Impressively, Budapest recorded the second-highest chargers per 1,000 capita score of all the cities in our top 10, with a total of 1.38.

The 10 European capitals with the lowest EV charging density

To get a better understanding of the prominence of EV charging stations across Europe, Uswitch also examined the capital cities with the least amount of electric charging points per square kilometre. 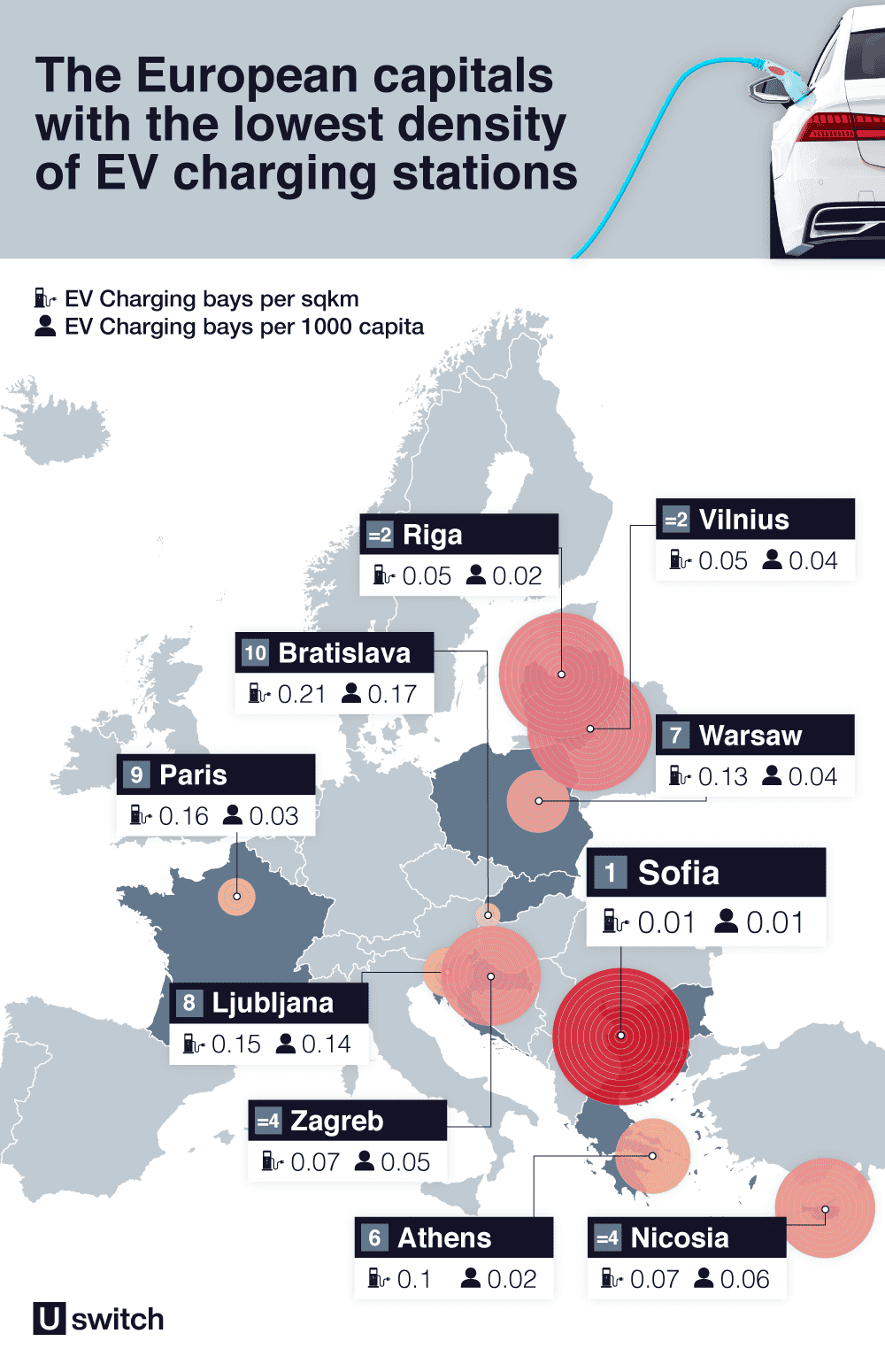 Joining Sofia in our bottom five are the Baltic cities of Vilnius and Riga which finished joint second with electric charging points per square kilometre scores of 0.05. As a city famed for its historic baroque architecture, Riga’s worrying score of 0.04 for chargers per 1,000 capita suggests that it requires a more modern approach when it comes to environmental sustainability.

This same accusation could be levelled at Riga, with the Latvian capital receiving an even more concerning score of 0.02 chargers per 1,000 capita.

Completing our bottom five are the cities of Nicosia and Zagreb. The Cypriot and Croatian capitals share the joint fourth spot having both recorded terrible scores of 0.07 for charging bays per square kilometre.

While both scored badly across the board, Nicosia’s score of 0.06 for total chargers per 1000 capita marginally exceeds Zagreb who obtained a score of 0.05.

Athens, Warsaw, Ljubljana, Paris, and Bratislava are the capital cities that make up the remainder of our bottom 10. With a total of 62 chargers across the historic city, Athens’ total of 0.1 chargers per square kilometre ranks it as the sixth-lowest city in our study.

Athens was followed by Warsaw, with the Polish capital found to have marginally more chargers per square kilometre (0.13) than the Greek city. The Slovenian capital of Ljubljana was found to be the worst Balkan city for EV charging density, finishing eighth-bottom with just 0.15 charging bays per square kilometre.

Rounding off our bottom 10 are the cities of Paris and Bratislava, which finished ninth and tenth with EV charging bays per square mile scores of 0.16 and 0.21, respectively.

What are the main things to consider when charging my EV on the go?

With EV charging facilities on the rise, owning an electric vehicle has never been more convenient. Despite this, many drivers still harbour anxieties about going electric. For those who’ve never owned an EV, issues such as how and where to charge your car can feel daunting.

Thankfully, there is enough expert advice available to ensure that you’re well prepared when you’re finally ready to make the switch to an EV.

“When it comes to charging an electric car when on the go, drivers can do so via an increasing number of public EV charge points located throughout town centres worldwide. You can find them outside supermarkets, leisure centres, cinemas and inside car parks, to name just a few places to look. It is worth bearing in mind that some public EV chargers you may have to pay for, so they are best used to top up the car's battery rather than charging it from empty to full.

Public charging points will usually charge at a 7 kW rate, providing about 30 miles of range per hour of charge (though some will charge at the faster rate of 22 kW). They’re best used to top up the car’s battery when you’re parked for an hour or two, rather than trying to get a full charge out of them. Public EV charge points can be paid for through an app on your phone, a dedicated electric car charging card or contactless payment depending on the provider.”

Our guide on how to charge your electric car at public points offers a step by step guide on public charging.

The speed of charging at a public EV station can vary depending both on your car and the power of the charging facility. A public rapid charge point can return most EVs to 80% of their full range in just 30 minutes.

No. Because EVs have fewer moving parts, they’re actually less likely to break down than traditional petrol or diesel powered vehicles.

Home EV charging stations are an ideal way to plan ahead and ensure your car is fully prepared for long journeys. Most home-chargers are capable of fully charging your EV overnight meaning you’ll have less need to stop regularly and charge your car at public charge points.