Which European meals have the largest carbon footprint?

Our everyday meals account for more carbon emissions than one might think; interested to find out which dish is the biggest culprit, Uswitch uncovered which meals in Europe have the largest carbon footprint.
Share this guide

One of the biggest causes of climate change is our everyday meals, with food accounting for a quarter of global emissions. As food air miles are one of the main contributors to carbon footprints, the green energy comparison experts at Uswitch were interested to find out which popular European meals produce the biggest carbon footprint.

To do this, we gathered a list of popular dishes before using multiple sources to find the gCO2e (CO2 emissions with the same global warming potential as other greenhouse gases) emissions for each ingredient per serving of the meal.

The top 10 European meals with the largest carbon footprint 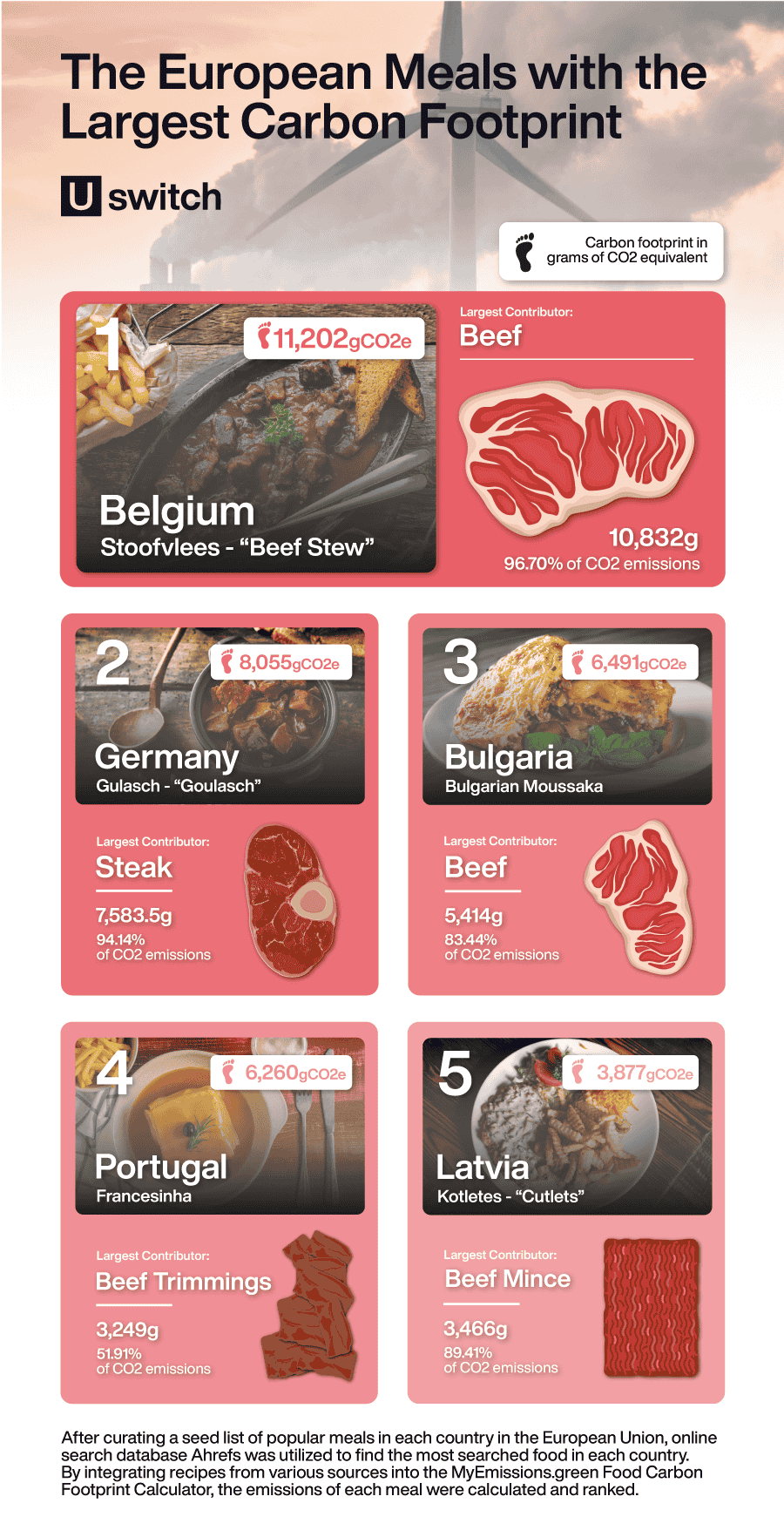 It’s bad news for lovers of beef stew. Stoofvlees, otherwise known as Flemish beef stew, has the largest carbon footprint out of Europe’s most popular dishes, with a total of 11,202 gCO2e per serving. This warming meal also calls for a kilogram of beef which creates 10,832 gCO2e.

A hearty dish, known in Germany as gulasch, is often made to feed the family on a chilly night. However, the stewing steak needed for this recipe means that there is an estimated 8,055 gCO2e released for each serving. This is the same emissions released as driving just over 19 miles, or 32 km.

Using potatoes instead of aubergines, Bulgarian moussaka can produce 6,491 gCO2e per serving which puts it in third place for European meals with the largest carbon footprint. The biggest contributor to this carbon footprint is the kilogram of beef needed in the recipe, producing 5,416 gCO2e alone.

Cooking francesinha (a Portuguese sandwich) and kotletes (Latvian patties) produce 6,260 and 3,877 gCO2e per serving, respectively. The Portuguese sandwich has such a big carbon footprint as it includes several types of meat, including pork and beef trimmings, whereas the patties focus on beef mince.

Traditional makaronilaatikko (a baked macaroni casserole) and Greek moussaka both produce emissions of over 2,000 gCO2e. The Finnish dish is slightly higher at 2,552 gCO2e due to the tasty mixture of lamb mince, ricotta and chopped tomatoes.

The popular Irish dish of coddle commonly consists of layers of roughly sliced sausages, potatoes, rashers of bacon, onion and carrots in a rich chicken broth. 1,488 gCO2e is released for every serving of this meal - the same as driving 3.6 miles. However, if you cook this meal in the traditional sense by using leftovers, the carbon footprint of this dish can be dramatically reduced.

The final two European dishes with the biggest climate impact potential are the rice and seafood-based Spanish fideua and Austrian kaiserschmarrn (buttery pancakes). Although these are vastly different in terms of ingredients and flavour, they are fairly similar in carbon footprint, with 1,320 and 1,159 gCO2e each.

The European Christmas food with the largest carbon footprint

Many see Christmas as a time for indulgence, especially when it comes to meals. But which type of European Christmas food produces the largest carbon footprint?

With meat accounting for over 60% of all greenhouse gases from food production, it’s no surprise that most of the top foods for carbon emissions fall into this category. In fact, the top 13 include some element of animal product, with the biggest carbon footprint coming from the consumption of venison (1,784 gCO2e). Following behind is roast pork and ham, with 749 gCO2e each.

A single serving of Latvian grey peas and bacon is made using 120g of peas and 30g of bacon as the base, which can potentially result in 706 gCO2e being emitted. This is the fourth-highest carbon footprint out of all popular Christmas food studied and is equivalent to driving nearly two miles (2.8 km).

Other popular emissions-heavy Christmas food consists of pork-based offerings, including sausages with sauerkraut, just pork and sausages on their own with 692, 663 and 563 gCO2e, respectively. If you choose to have all of these pork items during Christmas, the emissions released would be the same as driving 4.6 miles or 7.5 km.

How to reduce your carbon footprint when cooking at home

To keep your holiday in check, you can calculate your own carbon footprint and see the environmental effect you’re currently having without the additional extravagance of Christmas.

Reduce this footprint by following these tips from energy expert, Will Owen, for energy-efficient cooking:

“1. Use a microwave more than an oven

When it comes to heating up and cooking food, the microwave is the most efficient method - it's always faster and its smaller size (vs. the oven) means the heat is more evenly distributed. So, it's a good choice to use your microwave whenever it's possible.

The fridge can be used to defrost frozen foods overnight or while you are working. Defrosting ahead of time not only reduces preparation time but also eliminates the need to use a microwave to defrost faster.

The hardest part is just remembering to remove the food from the freezer well before you need it.

3. Cook in glass or ceramic dishes

When cooking, try to use glass or ceramic dishes whenever you’re able to. These are the best materials to use in the oven because they retain heat better than their metal counterparts.

Due to the increased efficiency of these dishes, you can even lower the heat than needed or reduce the overall cooking time.

If you use a pan that is the right size for the amount of food you are cooking, you will use less energy than you would if you were heating a larger surface area than you need to.

You should also try to use the right hob size for your pan when you have selected it. The larger the burner, the longer it takes to get to the right temperature and a pan that's too large will waste energy.”

Find out how to reduce your carbon footprint.