Postcode lottery: Devon residents fork out twice as much as Westminster in household running costs

When it comes to household running costs it’s not always about how much you use, but where you use it. A new analysis of over 2,000 postcodes from Uswitch.com, the price comparison and switching service, sees households in PL8 in Devon hardest hit, forking out an average of £332 per month in household running costs, compared to SW1P in Westminster paying just £185 a month to run their homes.

The study also finds that those living in NE31 South Tyneside, Newcastle, have to dig the deepest into their pockets, allocating 13% of their take home pay to run their homes, while Westminster locals in SW1P only need to budget 2% of their income towards paying for monthly household bills.

Those in CM22 (Uttlesford, Epping Forest, East Hertfordshire) pay the most to insure their homes at £66 per month. That’s an astonishing 11 times more than those in NE44 in Northumberland who pay under £6 per month. NW11 in Barnet and SW13 in Richmond upon Thames also suffer from high home insurance costs of more than £45 per month. However, postcodes in North Norfolk (NR24), Liverpool (L5), West Devon/Torridge (PL16) and Bournemouth (BH2) benefit from lower home insurance premiums – all paying under £8 per month on average.

The top ten most expensive postcodes for water all fall in Devon and Cornwall with an average monthly water bill of £71. South West Water, the supplier that services the area, says that these higher water bills are due to the thousands of miles of pipes needed to reach such a large area of land, with only a small number of households to cover the costs. On the flip side, postcodes in the South (Hounslow, Slough, Hertfordshire, Surrey and Wycombe) benefit from the cheapest water at only £30 a month.

SW1P and SW1V in Westminster are the cheapest postcodes for council tax, paying only £59 per month. That’s almost £100 less than those living in PL8 in South Hams who pay on average £152 a month. Households in the West Country suffer the most when it comes to council tax – with postcode DT5 in Weymouth and Portland topping the table, paying a staggering £166 per month.

Paying more in household running costs does not necessarily guarantee the best services. Residents in PL8, Devon, also suffer from slower broadband speeds, with an average residential speed of only 9.4Mbps – four times slower than the UK national average. While SW1P has come out on top for the cheapest running costs, its residents also enjoy faster broadband speeds (average of 24.9Mbps) than those living in PL8. With more than 95% of UK premises now having access to superfast broadband, those in PL8 need not languish on these slower speeds, as fibre broadband may be available at their home.

Shona Eyre, consumer expert at Uswitch.com, says: “This goes to show that your postcode can play a big part in how much you pay to keep your home running.

“While those living in areas with higher monthly running costs may feel cheated by how much they are paying compared to other parts of the country, it’s important to know that there are a few steps that can help reduce the strain of your finances.

“Shop around to see if you can get a better deal on your home insurance, energy and broadband. Just by switching your energy alone you could save up to £500 a year.

“Finally, see if your house is on the right council tax band by checking online via the Valuation Office Agency for residents in England and Wales, and the Scottish Assessors Association website for those in Scotland. This is especially important as most councils increased their rates at the beginning of this month.” 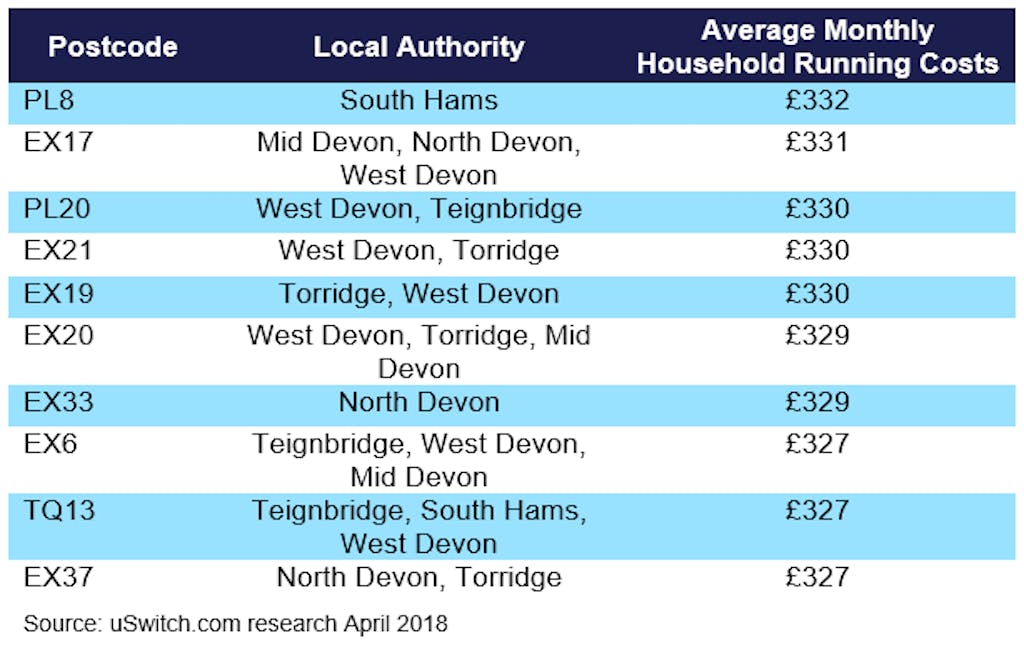 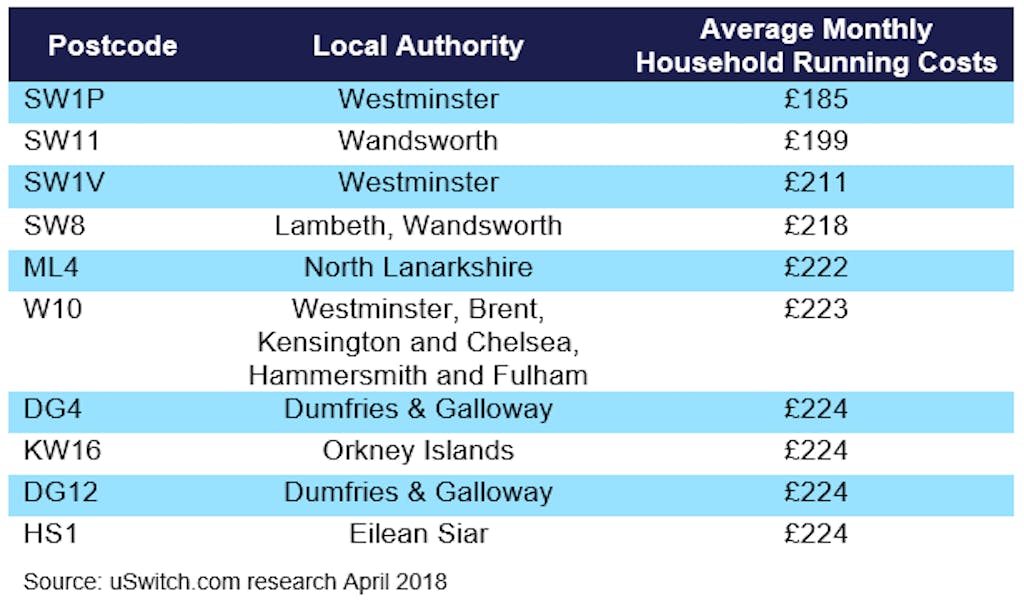 Research referred to was collected through Uswitch data and research conducted by Research Insight Ltd (www.research-insight.com). The study looked at the average monthly costs of home insurance, energy, water and council tax as well as the average broadband speeds and monthly household income across 2,305 outcode postcodes (e.g. SE1) in England, Scotland and Wales. Most of the data was collected from Uswitch.com, Autonet, Zoopla.co.uk, ONS and gov.co.uk. Data for council tax and household income was obtained through desk research, plus a small amount of data modelling. For more detailed information or for data relating to a specific postcode please contact the uSwitch press office on 020 3893 8391. Data for energy was obtained from Uswitch.com on 19 January 2018. Tariffs were analysed across the different energy regions in Great Britain. Home insurance data was obtained from Autonet and includes data from July 2016 to March 2018. The average home insurance premium is based on actual historic quotes provided by Autonet. Data is limited to postcodes with greater than nine quotes. The average cost of water in England and Wales relates to the regions designated to clean water and sewerage companies, their individual rates, and consumers' average consumption (in cubic meters). Data via Zoopla.co.uk and coverage based on water regions being matched against outcode postcodes. Data correct as of May 2016. For water costs in Scotland, data used the number of households in each Scottish Council Tax band and Scottish Water costs for each Scottish Council Tax band. The data was then modelled to provide the overall water cost per postcode. Correct as of 02 April 2018. Council tax looks at the cost of council tax band D, available at local authority level for England, Scotland and Wales. Each outcode postcode was then mapped within a local authority. Correct as of 02 April 2018. Where a postcode spans more than one local authority an average was taken of the council tax in each local authority. Gross Disposable Household Income (GDHI) is money left over after expenditure associated with income, for example taxes and social contributions and provision for future pension income. It should be noted that regional GDHI relates to all individuals within the household sector for a region and not to an actual average household or family unit. This study looked at the GDHI, divided it by the number of households in each local authority and then mapped each outcode postcode within a local authority for England, Scotland and Wales. Where a postcode spans more than one local authority an average was taken of the household income in each local authority. Correct as of 02 April 2018. Calculating how many households per local authority for England, Scotland and Wales. A household as per the 2001 census is defined as: - one person living alone, or - a group of people (not necessarily related) living at the same address with common housekeeping. These population figures are multiplied by the projected ‘household representative rates’ that represent the proportion of the population in that category who are household representatives. These rates are based on the 1971, 1981, 1991, 2001 and 2011 censuses and Labour Force Survey data. Broadband speeds data from Uswitch.com, correct as of 05 February 2018. Residential data is limited to postcodes with three or more unique tests.

Ten most expensive outcode postcodes (all costs are monthly averages):