Twelve million current account holders at the biggest high street banks could be paying more than £640 million too much on their overdrafts, according to Uswitch.com, the price comparison and switching service. With the big banks charging over 50 times more than the cheapest in fees and interest on the typical overdraft, consumers are missing out by not switching to cheaper providers.

On average overdraft users are £285 in the red each month and use the credit facility for nine days. A further fifth (18%) of borrowers say that they are stuck in their overdraft for nearly three weeks every month – racking up more than £110 in fees and interest each year.

On average, consumers are paying £56.52 every year to their high street bank in overdraft fees and interest rates. By comparison, customers of the cheapest provider – First Direct, which charges no interest on overdrafts of up to £250 and no fees – pay as little as £1.56 a year on the average overdraft.

The most common reason consumers use their overdraft for each month is to cover their everyday expenses, with three in ten (29%) relying on it to put food on the table and a further quarter (23%) using the credit to pay their household bills. Just one in seven (15%) use it for emergency expenses.

Despite millions of consumers using their overdraft every month, one in five (21%) don’t know what it costs them. Nearly six in ten (59%) don’t realise that they could switch current account provider while being overdrawn, potentially reducing how much they paid to service their debt. 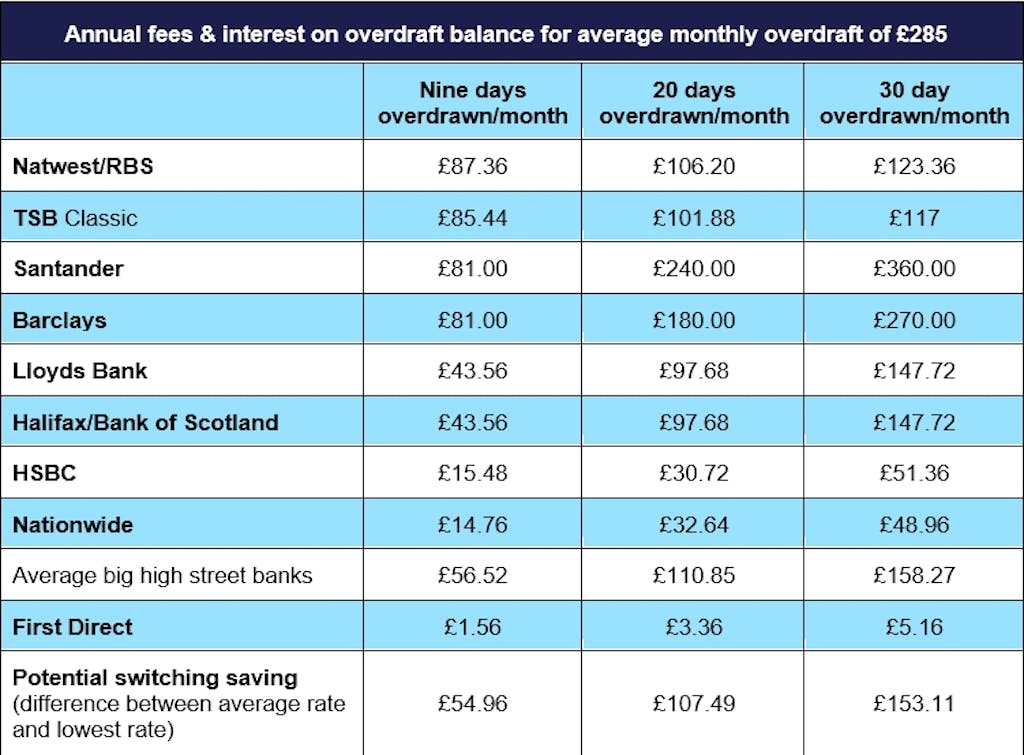 Tashema Jackson, money expert at Uswitch.com, says: “Overdrafts are an absolutely essential part of consumers’ everyday finances, but the associated charges seem to be accepted as a necessary cost, when they do not need to be at all.

”Banks that offer incentives on positive balances often make the headlines, but for the 12 million of us who rely on our overdraft to make ends meet every month, getting the cheapest deal on borrowing is what will really save you the most money.

“If you know you are going to be a few hundred pounds overdrawn each month, it really pays to do your research. Some banks offer interest free overdrafts, while others charge no fees for using one. Even when you have to pay, some will cost you significantly less than others.

“Crucially, banks could and should be doing more to help their customers ensure they are getting the best deal possible. Far too many aren’t aware what their overdrafts are actually costing them or that they can to a cheaper provider while overdrawn.

“There are options around to help cover household spending while you wait for payday, or provide you with a safety net in case of emergency, but it is always important to check the terms and conditions of any credit agreement you sign up to. Knowing what the penalties are should you miss a repayment and understanding the impact on your credit rating are essential before taking out any form of borrowing.”

All research referred to was conducted by Opinium between 10th and 13th September amongst 1,004 respondents who have fallen into an overdraft in the last 12 months. All overdraft fees and charges calculated via provider websites and/or Candid Money overdraft calculator assuming £285 overdrawn nine consecutive days per month, twelve times a year