Match of the Pay: Bournemouth supporters will spend 241% more per game to follow their team on TV than Premier League giants

Fans of the Premier League’s newly promoted teams face paying £35 per game to watch them play on pay-TV and streaming services this season - three times more than the biggest clubs, reveals Uswitch.com, the comparison and switching service[1].

Latest research shows a quarter of Brits with a sports package feel it’s the most important part of their TV deal[3], yet one in seven (16%) is thinking about cancelling to save money[4].

To help break down the cost of being a sports fan, Uswitch has created a Football Subs Index, revealing the number of TV appearances expected for each top-flight team in 2022-23, to show which club’s supporters will get the most matches for their money[5].

It found the average cost of following a Premier League side through the season using Sky Sports and BT Sport packages and Amazon Prime Video is £21.93 a game[2]. Yet fans of Bournemouth, Fulham and Nottingham Forest - the three promoted sides - will be paying £35.67 per game to watch their favourite club, based on how often each team’s games are televised.

Historically, clubs who have just come up from The Championship are picked for fewer TV fixtures than established Premier League teams and title contenders. This means their supporters pay more per match to see them in action. Last season’s newcomers, Watford, Norwich and Brentford, all finished well down the table for the number of games broadcasted[7].

Not only have they won more trophies over the years, but fans of Arsenal, Liverpool and last year’s champions Manchester City also pay the least per game, an average of £10.44[8]. Their clubs get the most televised matches in the Premier League and 11 more games shown on average through playing in European competitions like the Champions League[9].

Arsenal are expected to get the joint-most TV appearances this season, which kicks off this Friday. The north London club, who had 29 games televised in last year’s Premier League[10], are one of the favourites for the Europa League. This will guarantee them at least six extra live fixtures, and double that if they make it to the final.

Almost 6.5 million Brits have a sports package, 45% of total pay-TV subscribers[11], while 1.6 million football-loving households are signed up for both Sky Sports and BT Sports[12].

This season Sky Sports will feature 128 of the 380 Premier League matches, while 52 will be shown on BT Sport, which also has exclusive rights to show the Champions League, Europa League and Europa Conference.

Meanwhile, Amazon Prime Video will stream 20 Premier League games split between October and December. UK sports channels cannot show all the league fixtures because of the blackout rule, which prohibits the broadcasting of Saturday 3pm games to protect match attendances. 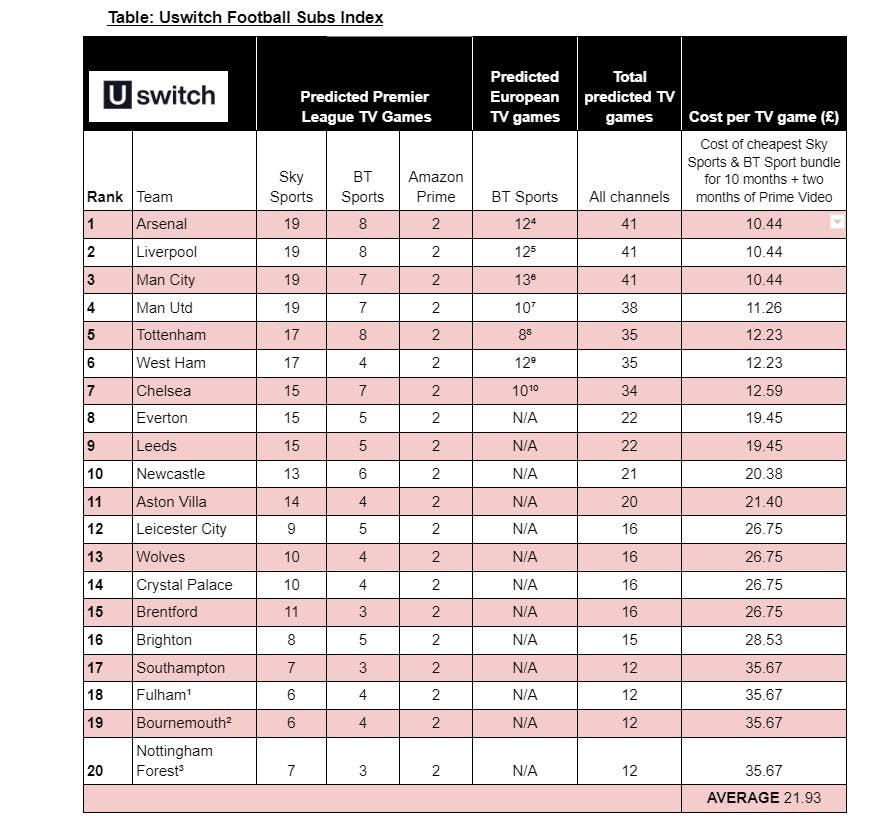 The cheapest subscription package to watch all Sky and BT games is £41 a month, while Amazon Prime Video’s streaming-only service is £8.99 a month. This means that fans wanting access to every televised game during the season will pay £427.98 from August to May[1].

Yet supporters focused on their team’s TV fixtures could save considerably by using   short-term offers from NOW TV and BT to follow them without being tied into a lengthy subscription.

For fans looking to save time and cash, sticking to watching only their team’s games could mean a cheaper TV bill. Watching six live Sky Sports games through a daily £11.99 NOW TV pass and four through BT Sport’s £25 monthly pass, will cost fans a maximum of £171.94 over the season, less than half the price of the cheapest BT and Sky package[6]. This limits the games you can access to only what is shown during the daily or monthly pass you choose - so it won’t be right for Premier League fans who don’t want to miss any action.

Catherine Hiley, TV and streaming expert at Uswitch.com, says: “As a lifelong Southampton fan, I know how frustrating it is to feel like your team’s games never make the cut for TV - so we wanted to show people what it really costs to be a supporter, and how to find the best value ways to watch.

“Following the Premier League at home can feel like navigating a minefield of pay-TV packages and fixture lists. But you can save money by selecting the matches you’re most interested in and taking advantage of special offers.

“The Premier League releases updated monthly TV fixtures in batches throughout the year so keep an eye on them to stay ahead of the game.

“This season, Amazon Prime Video is showing a week of Premier League fixtures in October and December, so you are guaranteed to see your team in action twice by subscribing then. Newcomers to the streaming service can also halve their costs by taking out a free trial in October. Just remember to cancel before November, when the league takes a winter break for the World Cup in Qatar.

“If you’re a Champions League fan, you’ll need a BT Sport subscription. But if you only follow the Premier League, Sky shows the most live games and also offers free match highlights for all the fixtures online, on YouTube, and through its app.

“However, with new pay-TV deals for Sky and BT requiring an 18 or 24-month contract, you should consider whether you want to be tied into a deal that will force you to pay for sports channels long after the season has finished.

“If your team is near the bottom of our Football Subs Index, using NOW TV and the BT passes instead could give you the flexibility to swoop in on cut-price deals mid-season. It also means you can cancel as soon as the final whistle blows in May, in case your club’s stay in the Premier League is a brief one.”

For advice on how to watch the Premier League, visit Uswitch’s guide.

Opinium surveyed a sample of 2,000 UK adults from the 22nd July to 26th July 2022. Results were weighted to reflect a nationally representative criteria.

1. Calculation based on the cost of subscribing to BT’s £41-a-month Big Sport package, which includes BT Sport and Sky Sports Premier League, for 10 months + the cost of two months’ membership of Amazon Prime, which will be £8.99 a month from September = £427.98. Cost per game for each team worked out by dividing £427.98 by number of predicted televised games. Bournemouth, Fulham and Nottingham Forest’s cost per game of £35.67 is a 241% rise on Arsenal, Liverpool and Manchester City’s cost per game of £10.44

2. Average cost per team calculated by adding all cost per game figures and dividing it by the 20 teams = £21.93.

3. Respondents were asked if they agreed with the following statement: ‘Having a sports package is the most important add-on for my pay-TV package’. Of those who received sports channels 145/535 agreed = 27%

4. Respondents were asked if they agreed with the following statement: ‘I am thinking about cancelling my sports subscription in order to save money’. Of those who received sports channels 88/535 agreed = 16.4%

6. Calculated by paying £11.99 for a daily NOW TV package for each team’s televised Sky Premier League fixtures and adding this to £25 per game for watching BT Sports fixtures on the monthly BT App to work out the total cost (assuming all a team’s BT games are in different months). E.g for a side with 6 games on Sky and 4 games on BT the maximum cost using NOW TV and the BT App would be 6 x £11.99 + 4 x £25 = £171.94. This would then be added to the £17.98 cost of two months of Amazon Prime Video to cover their Premier League fixtures in October and December

Table footnotes: Data for table based on televised fixture allocation from 2021-22 Premier League season and estimated number of European fixtures for top-seven teams ¹ Based on performance of Burnley (highest-placed relegated side)

² Based on performance of Watford (second-highest relegated side)

³ Based on performance of Norwich (bottom side)

⁴ Based on exiting Europa League at semi-final stage

⁵ Based on exiting Champions League at semi-final stage

⁷ Based on exiting Europa League at quarter-final stage

⁸ Based on exiting Champions League at second round stage

⁹ Based on exiting Europa Conference League at quarter-final stage

¹⁰ Based on exiting Champions League at quarter-final stage