A Midsummer Night's Stream: what are the best Shakespeare screen adaptations?

Shakespeare Day falls on the 23rd of April every year, which was the date the renowned English poet, playwright, and actor was born and died. To celebrate the day, we've looked at the most iconic adaptations and where to watch them.
Share this guide 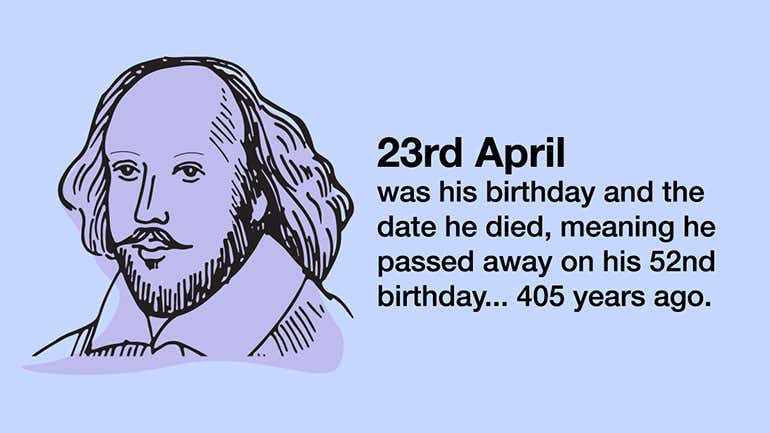 William Shakespeare is one of the most recognisable names in English literature, having written at least 37 plays. From his written works, over 415 TV and film adaptations have been made, all influenced by the storylines and characters of the legendary writer. 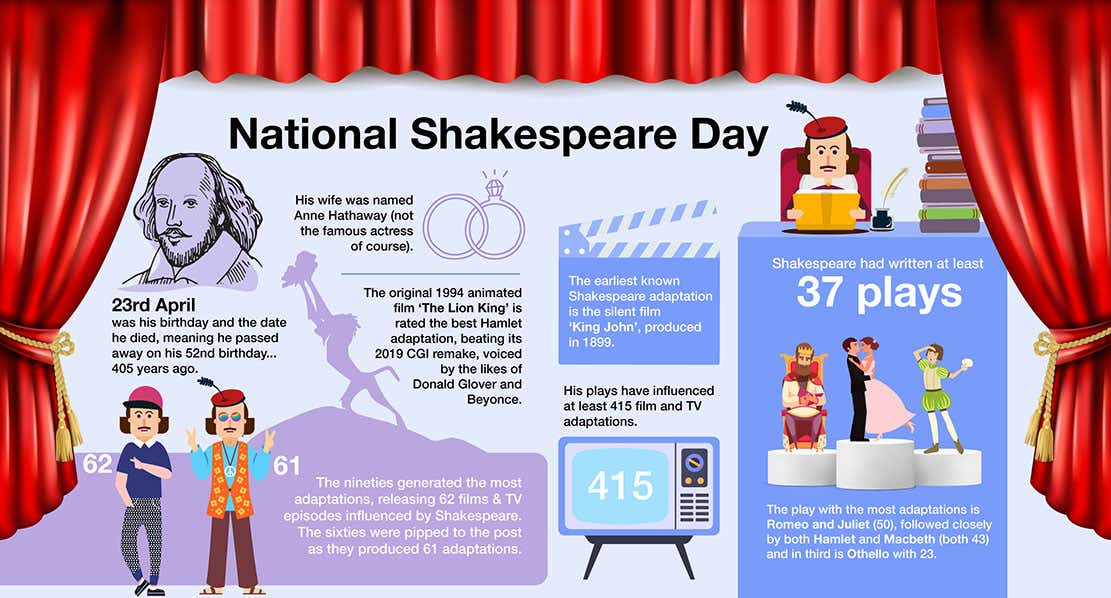 ‘King John’ is the earliest known adaptation, a silent film in four parts dating back to 1899, with the most recent being the CGI remaking of The Lion King in 2019.

The classic tale of two star-crossed lovers, Romeo and Juliet, has inspired the most recreations with at least 50 known film and TV adaptations. Hamlet and Macbeth follow closely in joint second place, totalling at least 43 versions of each over the 405 years since his death. 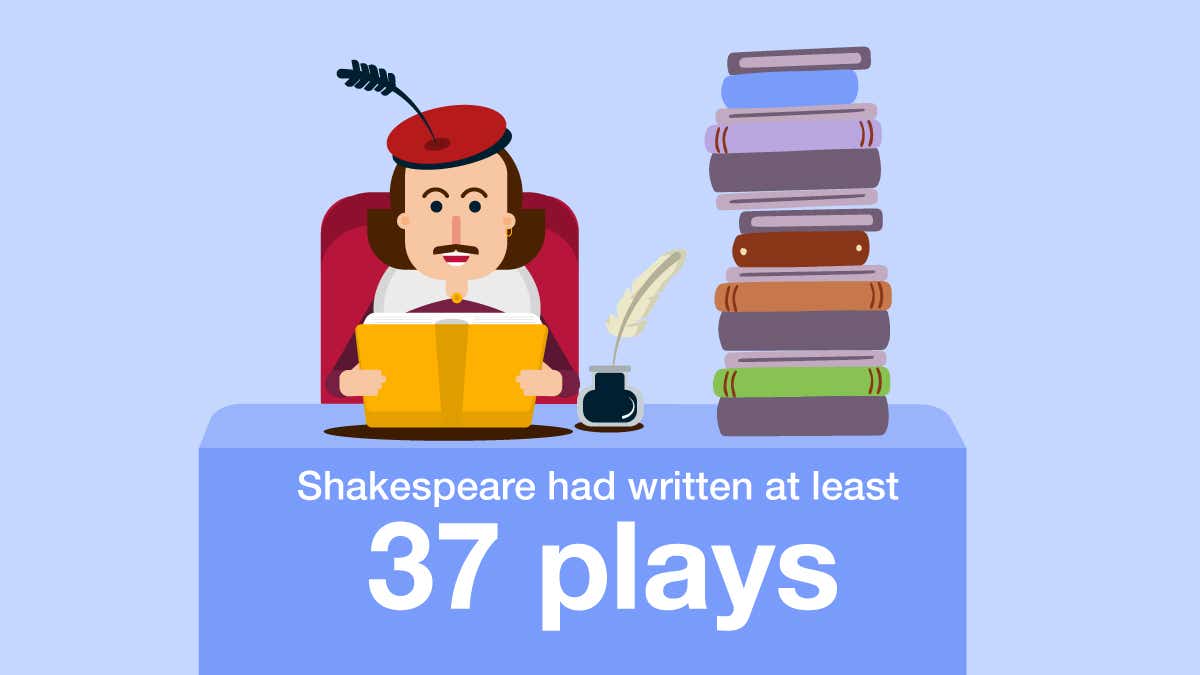 At least 32 countries around the world have produced and released Shakespeare revamps - with the UK leading the way with 187 reproductions, 108 made in the USA and India falling in third place with 27 Shakespere-inspired adaptations.

It’s not only the obvious adaptations which make the list, and popular films such as The Lion King, West Side Story, 10 Things I Hate About You, Get Over It and She’s The Man is are based on the legend's work.

How to celebrate Shakespeare Day away from the theatre 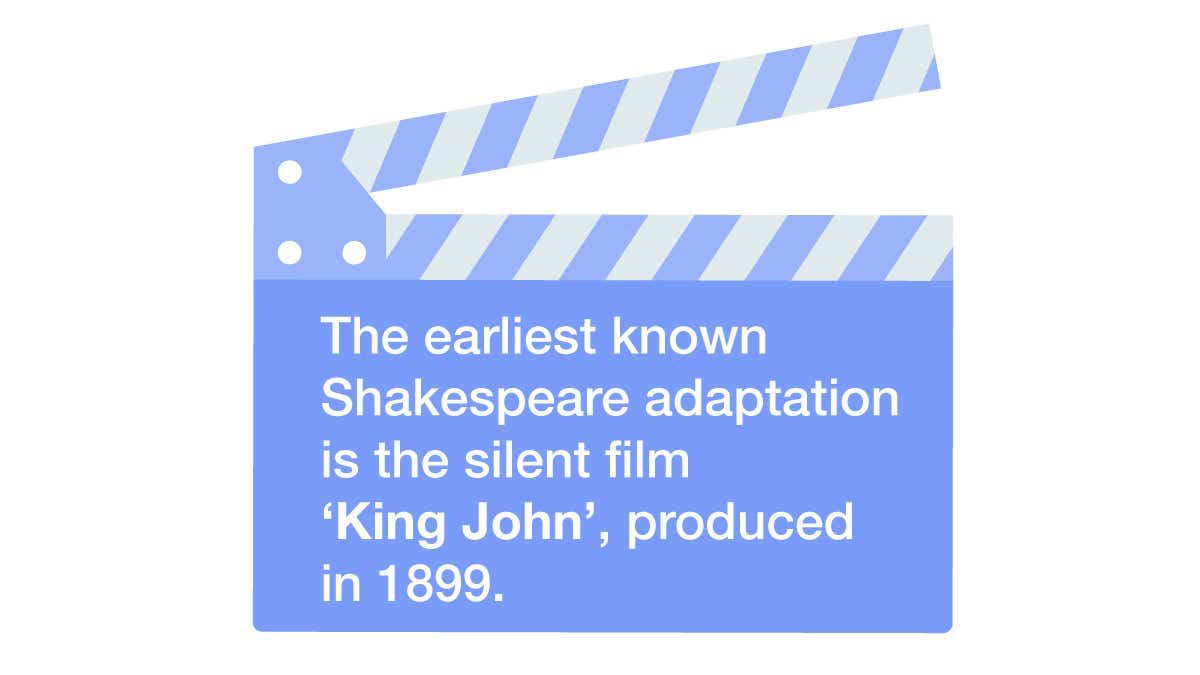 With theatres closed in the UK, many Shakespeare enthusiasts might be unsure how they can celebrate the literary genius of the world’s most renowned playwright this year.

Luckily for fans, William Shakespeare’s influence lives on beyond his theatrical performances. Over 415 TV and film adaptations have been inspired by his written works.

With this mind, we've put together a short list of highly rated and surprisingly Shakespearean movies that can be enjoyed at home:

Fans of the classic romantic tale of Romeo and Juliet will know that it is the most popular of any of Shakespeare’s plays and has inspired at least 50 recreations. Director Baz Luhrmann’s 1996 Romeo + Juliet, starring a fresh-faced Leonardo DiCaprio and Claire Danes, has an IMDb score of 6.7 and is currently available to watch on Amazon Prime Video and Disney+ with a subscription.

However, a higher-rated version of the infamous romance, with an IMDb score of 7.6, is director Franco Zeffirelli’s 1968 Romeo and Juliet. The role won Olivia Hussey a Golden Globe for her portrayal of Juliet, starring alongside born and raised Londoner, Leonard Whiting. While the production isn’t available with any popular subscription services, you can watch it on YouTube, Google Play Movies & TV and Amazon Prime Video from £2.49.

Are you surprised to learn that West Side Story is surprisingly Shakespearean? The 1961 musical directed by Robert Wise and Jerome Robbins is actually inspired by Romeo and Juliet. The story focuses on the romance of Tony and Maria as they attempt to deal with the growing tension between two warring New York City gangs.

The critically acclaimed movie, with an IMDb score of 7.5, became a household name and won ten Oscars and three Golden Globes upon its release. The movie is available to buy from YouTube, Google Play Movies & TV and Amazon Prime Video from £7.99.

Director Vishal Bhardwaj’s 2014 Haider is an adaptation of Shakespeare’s infamous Hamlet. The film tells the tale of Haider, played by Bollywood star Shahid Kapoor, a young man returning to Kashmir after his father’s suspicious disappearance.

The film has an impressive 8.1 IMDb score and is currently available to watch on Netflix with a subscription. 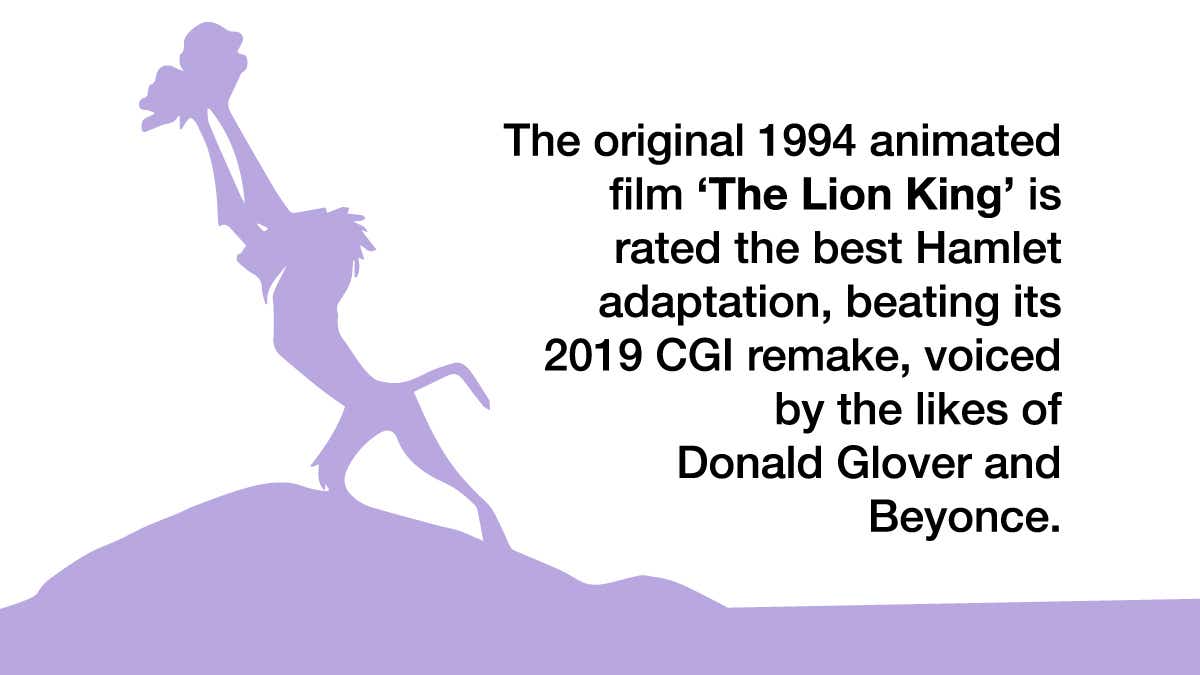 Another Hamlet-inspired adaptation is the Disney classic, The Lion King. Despite its popularity, many likely don't realise that Simba’s story in the 1994 animated film took creative inspiration from Shakespeare’s longest tragedy.

The original version of The Lion King scores higher on IMDb with 8.5 compared to a 6.9 rating for the 2019 CGI reboot, starring Donald Glover and Beyoncé. While Elton John fans can expect to hear his songs featured on both the original and reboot version of the movies. You can watch both versions on Disney+ with a subscription.

Another surprisingly Shakespearean movie on our list is director Akira Kurosawa’s 1957 Throne of Blood (original title Kumonosu-jo). This Japanese film is based on Macbeth and tells the story of Taketoti Washizu and Yoshiaki Miki as they receive premonitions of their futures and the tragedy that follows as a result.

This adaptation is highly rated on IMDb with a score of 8.1 and can be watched on Amazon Prime Video with a subscription.

10 Things I Hate About You

Did you know that director Gil Junger’s 1999 10 Things I Hate About You is inspired by Shakespeare’s comedy, The Taming of the Shrew? The popular romantic comedy, starring Heath Ledger and Julia Stiles, tells the story of unlikely couple Patrick and Kat as fellow students orchestrate their interactions behind the scenes.

This cult classic, with an IMDb score of 7.3, is the perfect fun choice to watch this weekend. You can watch it on Disney+ with a subscription.

“It’s perhaps unsurprising to hear that Shakespeare continues to influence filmmakers all over the world, with at least 90 adaptation being made since the turn of the century.

“The modern takes on compelling storylines and characters, including the use of animation and CGI - shows how relevant these plays are even four centuries on.

“Why not take the opportunity to honour the man himself this weekend, and treat yourself to a film or two to celebrate National Shakespeare Day.

“Many of the reboots can be found on streaming services - some are even included in your subscription, so if you are interested it’s worth having a look.”

See our latest and best pay-TV deals at Uswitch.