Virgin Media's V6 set-top box is packed with serious tech and powerful features. Our V6 guide will help you make the most of the new set-top box.
Share this guide 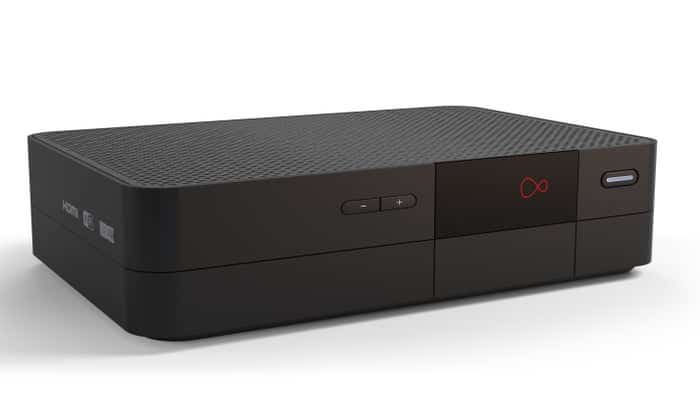 Virgin Media's V6 set-top box is packed with some serious tech and powerful features. If you’re new to Virgin or just upgraded to the V6, this guide will help you make the most of your new set-top box.

This guide to the Virgin Media V6 should give you a few tips and tricks you may not know yet. 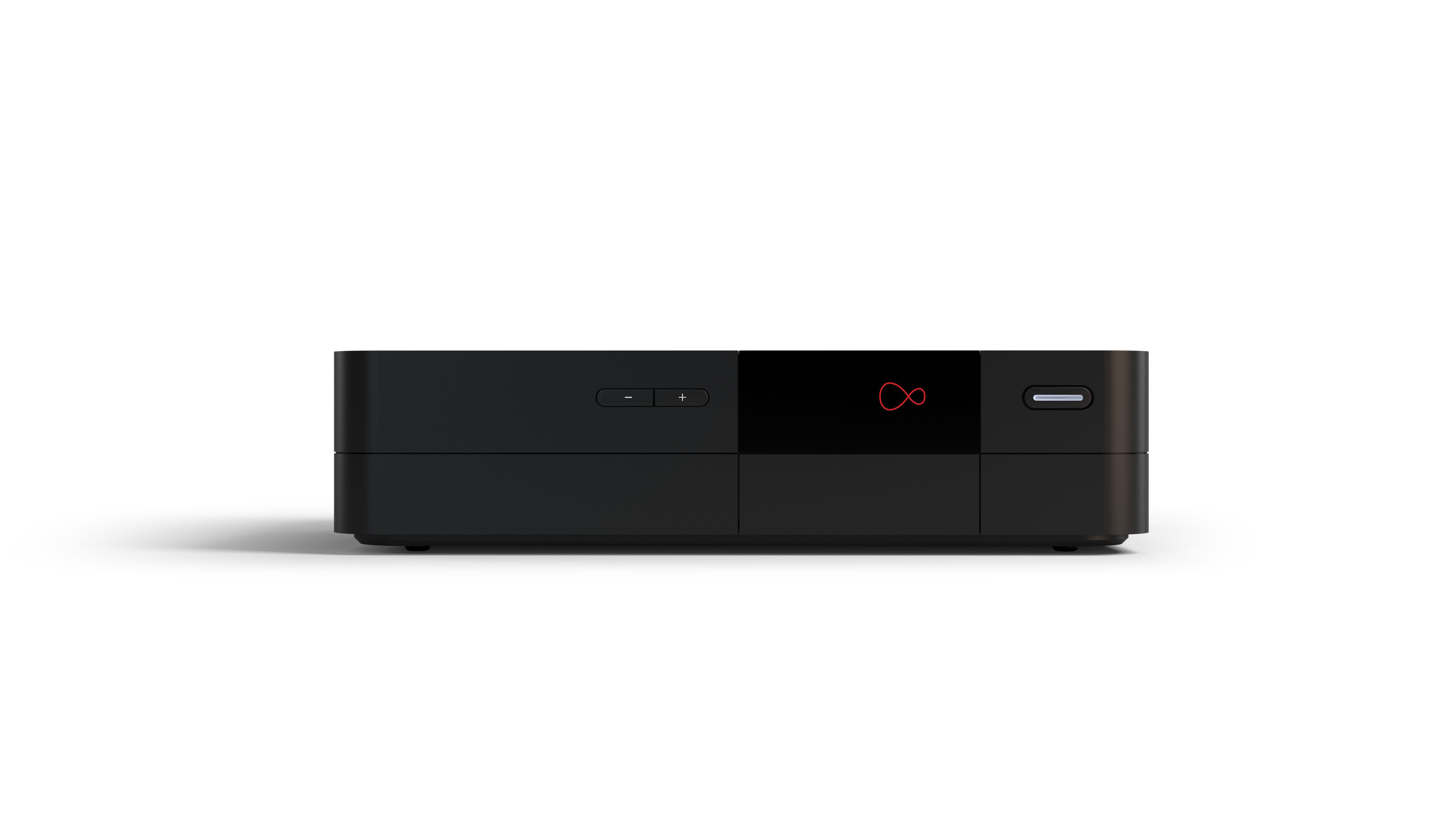 The Virgin Media V6 is Virgin’s smallest, smartest and fastest box yet, and once you’ve had a chance to sit down and use it, you’ll understand why.

Despite some misleading pictures, the V6 is pretty small — especially compared to Virgin’s previous TiVo model. The V6 is about half the size and packs ten times the power. With the ability to watch programmes in 4K (also called UHD) and HDR.

Unlike the previous model, which came in both 500GB and 1TB sizes, the V6 is only available with 1TB of storage. This is enough for 500 hours of standard television recordings or 100 hours of HD recordings. And speaking of recording, this set-top box lets you record six programmes at a time, so recording conflicts should be at an absolute minimum for most households.

If you’re familiar with the older TiVo model, you’ve probably grown accustomed to seeing the comforting red lights to let you know your shows are recording. In an effort to make the box smaller, these red lights are gone from the V6, so don’t panic if you don’t see a red light during a recording.

Long time Virgin Media customers may be familiar with lagging issues from the older TiVo box, and those have were resolved in the V6. Apps and recordings load lightning fast, thanks to new, intelligent TiVo software, which was built with apps in mind.

If you’re like most consumers, you might use your set-top box for watching live TV or recorded shows, a streaming stick for catch-up programmes and on-demand, and some kind of gaming console for accessing Netflix or Amazon Prime. With the app integration and speed of the V6, however, you can streamline your viewing habits and watch everything from the V6 directly, so no more need to unplug devices or switch inputs all the time. 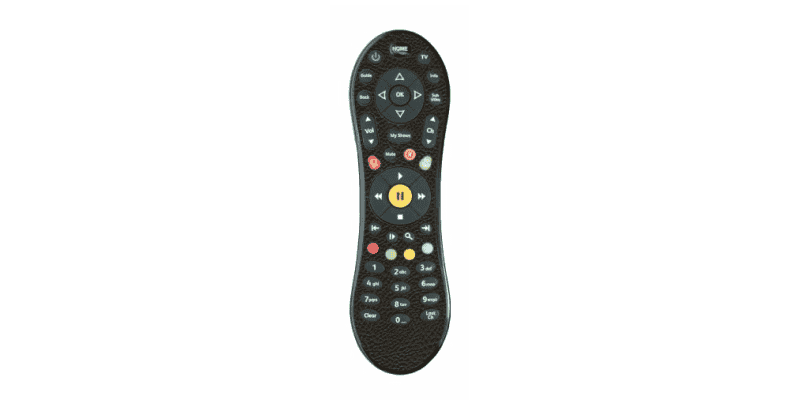 Just like the V6 set-top box, its remote control is smaller than its predecessor while still retaining a familiar design. If you’re worried about losing a smaller remote, rest assured that the remote has a handy feature: With the simple press a button on the V6 set-top box, the remote control will start beeping, so you should be able to find it if it falls between the sofa cushions.

This feature is possible thanks to the fact that it operates on RF (radio frequency) technology instead of IR (infrared) technology. In addition to letting you find your remote control when it goes missing, the use of RF means the control works without direct line of sight, so you can keep the set-top box tucked away in a cupboard.

Aside from the smaller size and smarter tech, the remote control has a few novel design features that still maintain the same easy to use, ‘one-click’ functionality. The TV guide, recordings, live TV and home buttons are all still one click away, and there’s a new search button that allows you to search for programmes with one click, too. 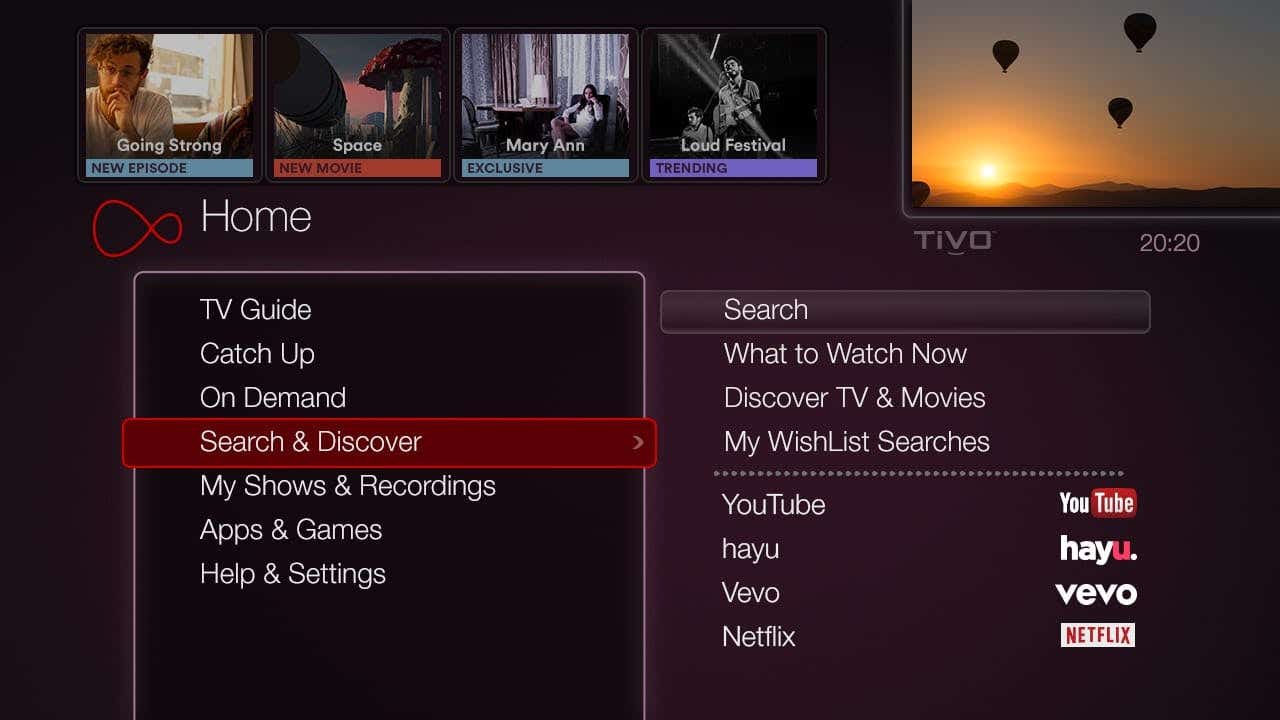 The Virgin V6 search feature is one of the biggest upgrades to the set-top box and current user interface from the previous model.

You can use the arrow buttons on the remote to select letters from the keyboard or, if you prefer, the alphanumeric style of messaging, you can type in programmes, actors, directors, films or topics. Rather than displaying alphabetically, results are listed by popularity across all users, so hopefully you won’t have to fully type out longer titles.

The beauty and genius of Virgin’s new search feature is that it doesn’t just show you results from the TV guide or Virgin Media Store — it looks across all streaming apps, catch-up services and on-demand players to find you the content that you want. It’s an extremely comprehensive search, and it delivers your results very quickly.

The Virgin Media V6 also shows you results you don’t have access to on your current package and enables you to upgrade or purchase add-ons from within the box itself.

If you do want to check out what’s popular on different apps or prefer browsing the Netflix home screen to find something to watch, you can still access individual apps in the 'Search and Discover' section on the V6 homescreen.

Never miss an episode with SeriesLink+

SeriesLink+ is a way to record and ‘bundle’ a series together across all the different services, channels, apps and recordings on your set-top box. SeriesLink+ also automatically records episodes and series across different channels, so you don’t have to set up multiple season passes.

Because this feature pulls all the episodes together and lets you watch them from within a single folder, it’s especially handy for watching currently-airing, long-running TV series, where multiple services may have exclusive rights to varying series. With SeriesLink+, you can watch everything in one place, no more switching between apps, recordings or devices.

Within the folder, episodes can be sorted by recording date or episode order so you can quickly find the episode you want — or you can hit the play button on the folder icon and play all episodes in order, if you’re setting yourself up for a day of bingeing.

In addition to making it easier to watch an entire series of a show, SeriesLink+ also makes it easy to free up storage space on your V6. If a show is available to stream, you can delete any recordings and stream it instead.

Multiroom viewing on the V6

So if you’re upgrading to the new V6, don’t throw away your old TiVo box just yet. Both the V6 and the older TiVo boxes can be linked together — either through Ethernet cables or wirelessly through a Powerline kit — and share recordings.

You can start watching a recording on one device and pick up where you left off on another, or you can start from an entirely different point on the new device.

While it may not seem as easy as Sky’s mini boxes, it does offer Virgin Media customers the benefit of doubling your storage space and recording capabilities.

Virgin lets you get a staggering six set-top boxes per home, although only three of these can be V6 boxes. 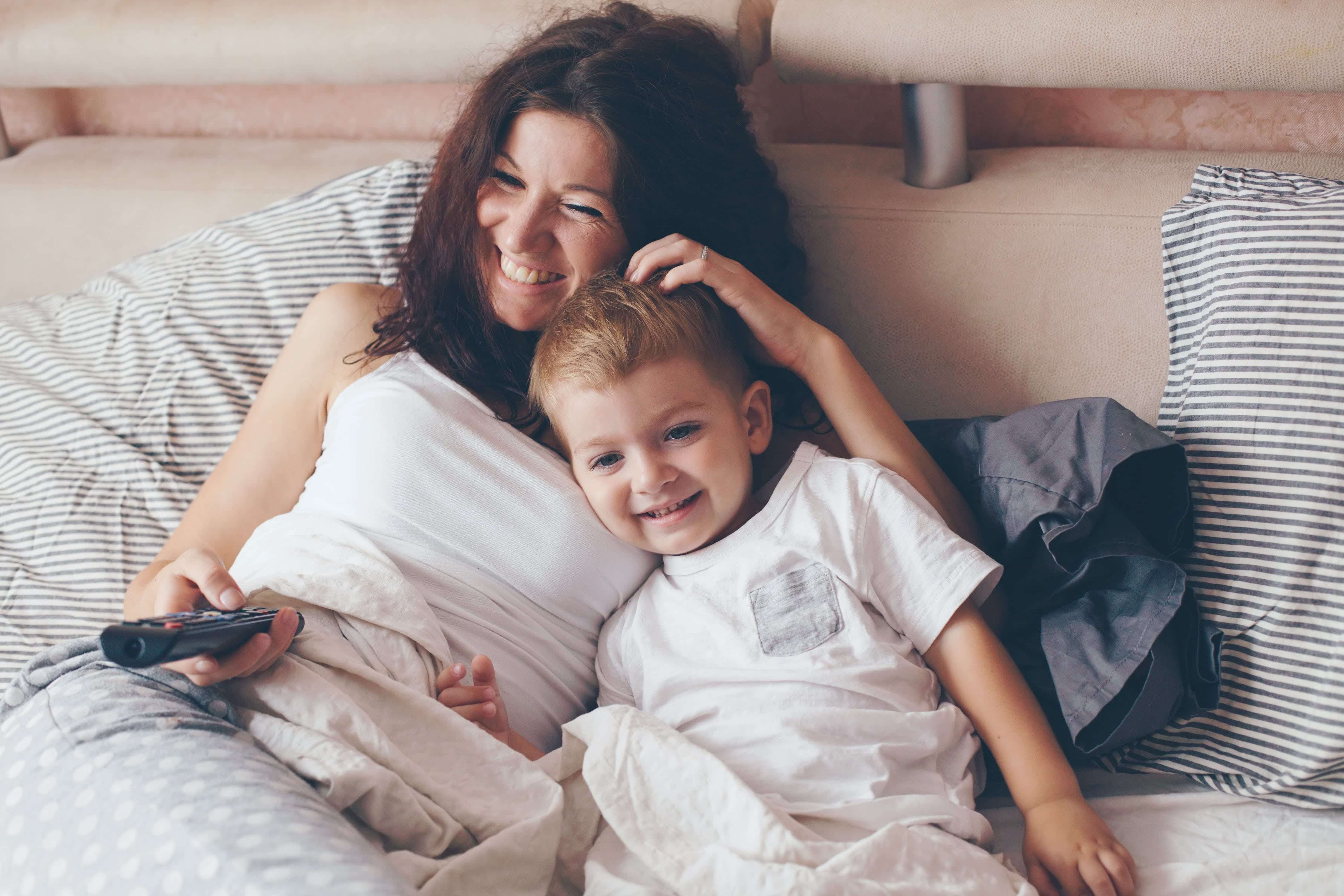 If you have kids, multiroom capability via linked set-top boxes might raise a red flag — but you don’t have to worry. Even though set-top boxes are linked and share recordings, parental controls are still determined by the settings on each box.

This means if you record The Walking Dead on the TiVo in your bedroom — where you’ve turned parental controls off — your child can’t watch it on the V6 in your living room — which has parental controls in place — without entering your PIN.

The default PIN for Virgin set-top boxes is 1234, so you’ll want to change it if you’re setting up parental controls. You can change your PIN and parental control settings in the Help section on your box.

Tips and tricks for the Virgin V6

You’ve got the hang of the basics you can then learn a few things to really get the most out of your new set-top box. 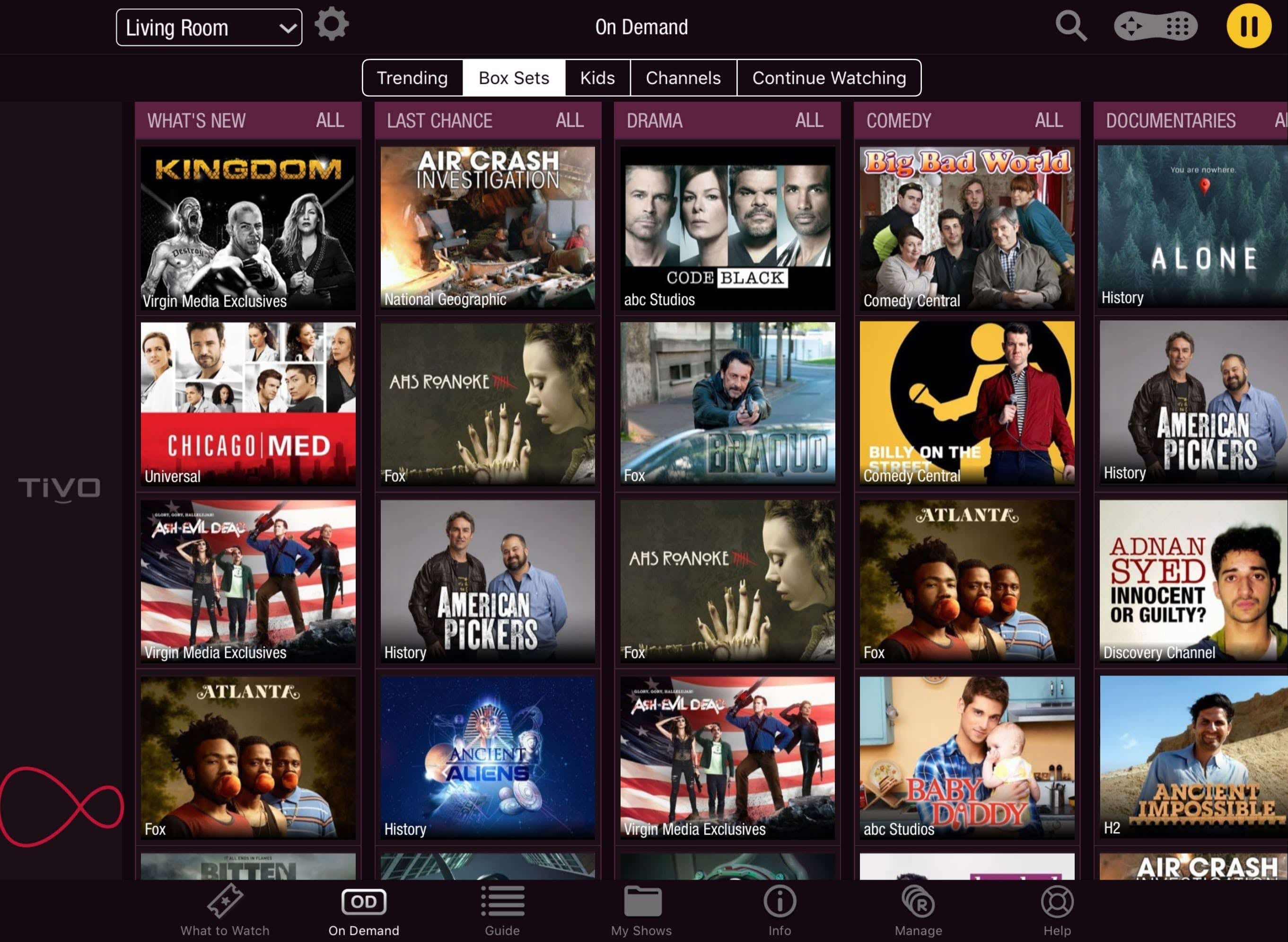 The Virgin TV Go app and the V6 set-top box are designed to work hand-in-hand. Through the app, you can control your V6 wherever you are as it lets you remotely set, cancel and delete recordings on your V6 box.

The Virgin TV Go app also lets you watch live TV on any two compatible devices anywhere in the UK with Wi-Fi. You can also sync on-demand boxsets and selected recordings (depending upon licencing rights) to the app, so you can watch these on-the-go within 30 days of downloading or 48 hours of starting viewing.

Virgin Media uses both algorithms and dedicated content curators to put together specialised TV and film collections, so if you’re ever stuck for anything to watch, it’s worth looking at their recommendations.

And if you don’t have the attention span to sit through a full episode or film, Virgin now has curated web collections to show you the best of YouTube, too.

These features are also available in the Virgin TV Go app under the What to Watch tab.

If you’d rather get more personalised recommendations, it’s definitely worth using TiVo’s own native suggestions feature. You can use the thumbs up button, pressing it up to three times, to tell TiVo which shows you like — and, just as important, the thumbs down button to tell TiVo which shows you don’t like. From there, you can set your TiVo up to automatically record suggested programmes for you, based on your interests.

And don't worry about using up storage space, as suggested programmes will automatically be deleted if you’re running low on space, always taking a backseat to any recordings you’ve set up.

Another feature that can help you save space on your V6 is the Bookmarks function.

Instead of keeping endless lists or saving recordings of popular programmes that you know will air again, you can bookmark any series or films to watch later. Bookmarks are stored in their own separate folder and, because they’re not downloaded or recorded just yet, don’t take up any space on your hard drive.

If you’re ever stuck and need help or don’t know how to do something on your V6, your set-top box has its own 'Help' section to assist you in solving any problems.

If that section doesn’t have the answers you need, it’s worth checking out the Virgin Media website. They offer a lot of helpful information, including how-to videos and a forum where you can post your exact problem and get more personalised advice.