Do you know your 'CHAPS' from your 'AER'? Uswitch surveyed the nation to find out which financial terms are the most and least understood by brits. Read on to find out what we're struggling with the most...
Share this guide

Many studies have recently exposed the fact that the British population falls short when it comes to financial literacy, with many Britons failing to understand basic financial terms. This means that not only will they struggle to understand the public financial policies put forward by the Government, but they may also struggle to look after their personal financial health too.

As a result, we sought to find out just how poor British financial literacy really is by surveying 3,972 Britons, questioning the extent to which respondents understood each financial term. Respondents were able to answer the following:

From this, we were able to uncover which financial terms Brits typically fail to understand, and which terms they are keen to learn more about, with the hopes that we can improve the nation’s understanding of their personal finance in the future. 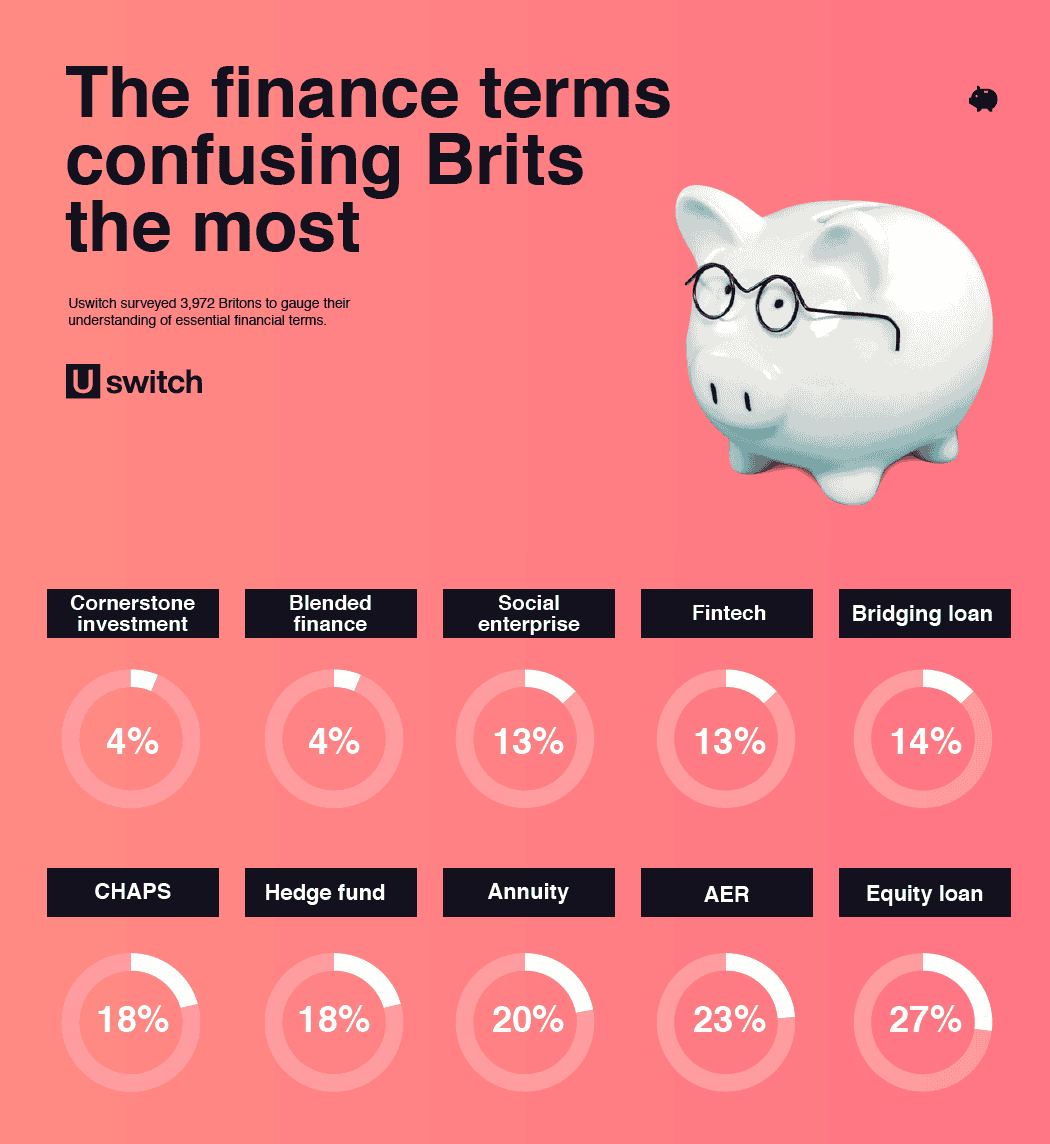 ‘Cornerstone Investment’ and ‘Blended Finance’ were both revealed to be both among the least understood and least recognised financial terms studied, since only 4% of the Brits claimed to understand exactly what they meant. This suggests that investment jargon is among the financial terms that Brits struggle to understand the most.

‘Social Enterprise’ and ‘Fintech’ both ranked as the second most confusing finance terms in Britain, with only 13% of respondents claiming to know exactly what each term meant. In summary, Social Enterprises are businesses or partnerships which use commercial strategies to achieve some social benefit.

Understood completely by just 14% of respondents, ‘Bridging Loan’ was found to be the third least understood financial term among Brits. Bridging Loans are short term loans that are often taken out when buying a property, paying a tax bill, developing property, embarking on a business venture, or during a divorce settlement. 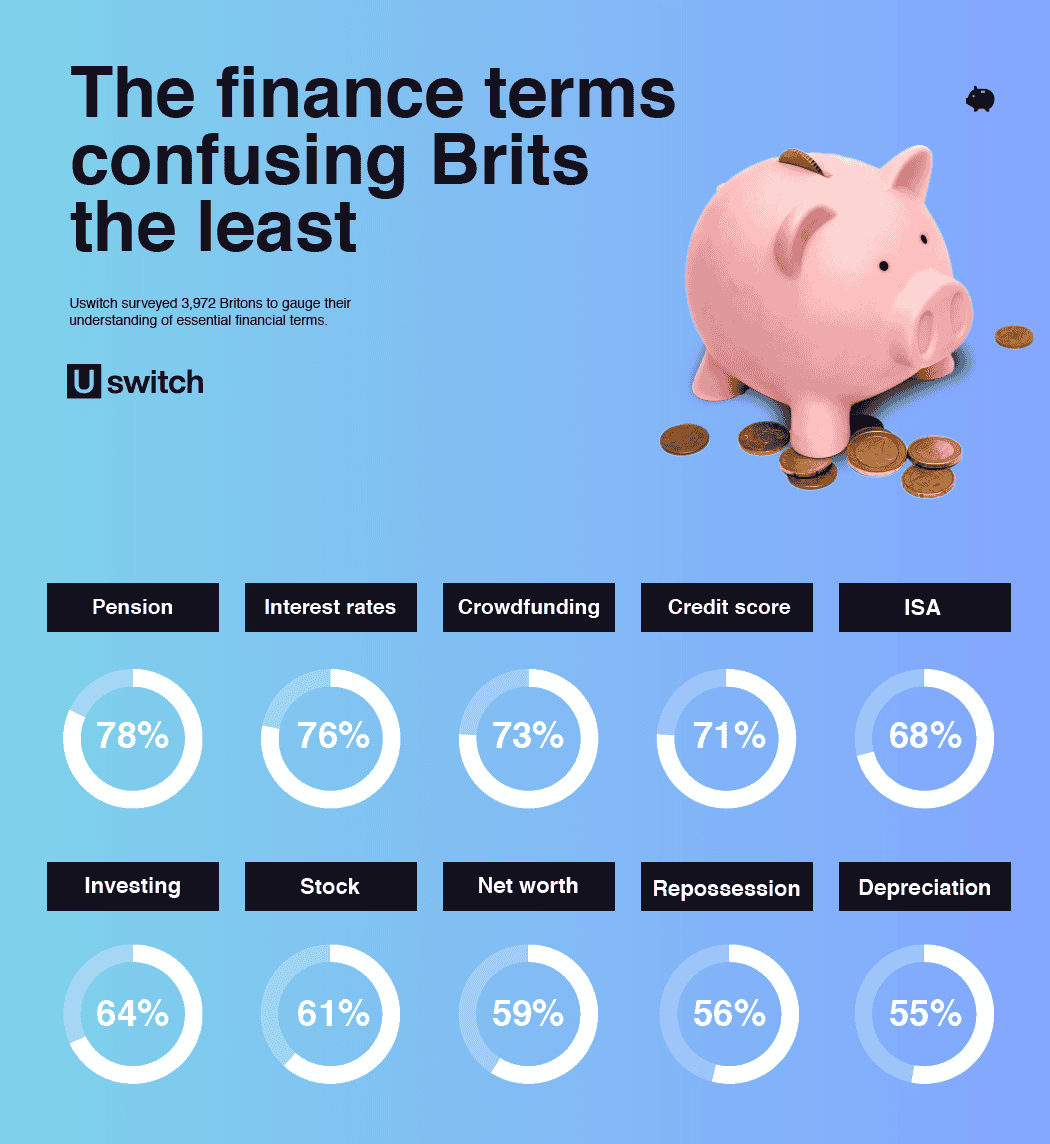 Brits surveyed purported to best understand the financial term ‘Pension’, a term used to describe a regular payment made to individuals above the official retirement age in the UK. In fact, over three quarters (78%) of Brits claimed to know exactly what the term meant, making it the least confusing finance term in our study.

‘Interest Rates’ was the second most understood financial term according to our survey, since an impressive 76% of respondents had a ‘strong understanding’ of the term. Interest rates represent a percentage charged on the total amount of money that you borrow or save, and given that they can often fluctuate, it is a key term for Brits to understand when looking after their financial health.

The third best understood financial term was ‘Crowdfunding’ - a fundraising mechanism whereby people, businesses and charities invest or donate money towards an upcoming project and receive a potential cut of profits in turn. In total, 73% of respondents surveyed believed that they understood exactly what crowd-funding means. By comparison, only 71% of Brits understood what a ‘Credit Score’ means (2% fewer), despite every individual in the UK having one.

The financial terms that Brits are least aware of 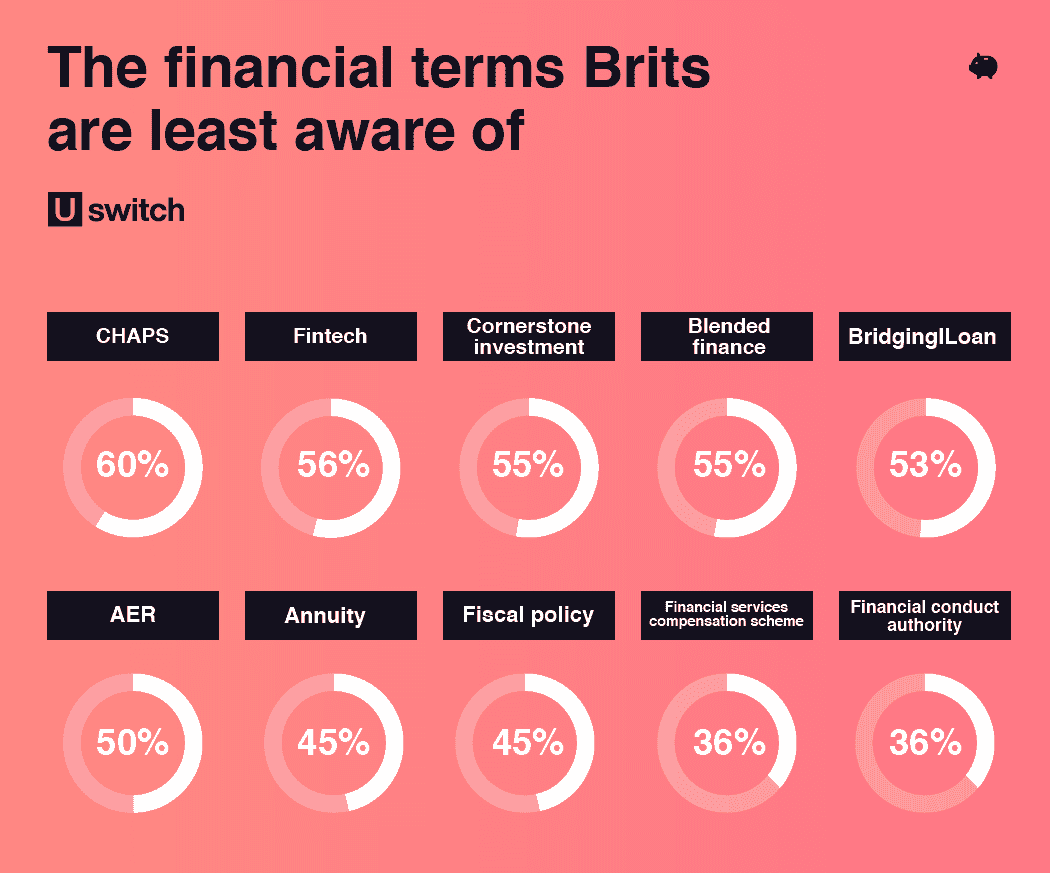 The financial term that Brits were least aware of was ‘CHAPS’, also known as the Clearing House Automated Payment System. Interestingly, 6 in 10 (60%) individuals had no knowledge or awareness of the term, which is used to describe one of the largest high-value payment systems in the world. The lack of knowledge held by Brits could be attributed to the fact that CHAPS is a bank to bank transfer service typically reserved for premium, urgent, and high value payments, so will not be regularly used by the average person.

Despite a recent surge in interest, 56% of the Britons studied were not aware of the term, ‘Fintech’, which represents a combination of both finance and technology. Although it sounds complicated, ‘Fintech’ is another word for financial technology and EY found that in 2019, 75% of the global consumers that they surveyed had used a money transfer or payments FinTech service, potentially without even knowing.

With just over half of respondents claiming to understand them, both ‘Cornerstone Investment’ and ‘Blended Finance’ are the financial terms that Brits were third least aware of. ‘Blended Finance’ is used to describe a financing model that combines an initial investment that typically comes from a government or philanthropic body with a later, commercial investment. Meanwhile, ‘Cornerstone Investments’ describe a situation where one or more investors agree to subscribe for a particular number of shares in a forthcoming first public sale of a stock, before they are released by the privately owned company. 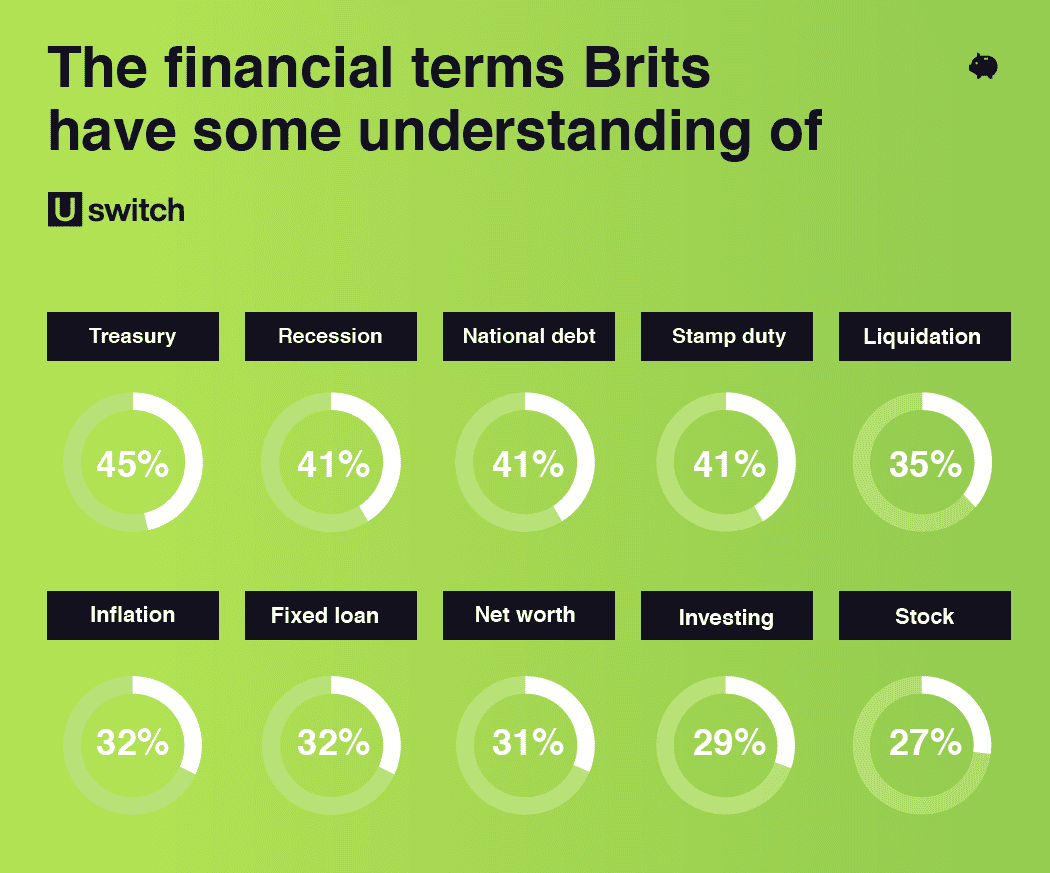 Our survey revealed that ‘Treasury’ was the financial term that Brits were most likely to have ‘some understanding’ of, with 45% of respondents claiming to. Put simply, treasury is a way to describe a place where all funds or wealth of an organisation - governmental or otherwise - are kept, deposited, and disbursed. The most famous and well known example of this is Her Majesty’s Treasury, which is the department of the Government that develops and executes the country’s public finance policy.

‘Liquidation’ was also revealed to be somewhat understood by Brits, with just over a third (35%) claiming to have some understanding of the financial term. This term is used to describe the process whereby a business is brought to an end and the assets and property belonging to it are converted into cash and redistributed.

Which financial terms do Brits Google the most and least?

n or explanation of. To determine this, we looked at the number of searches made on average each month for the definition of each financial term. 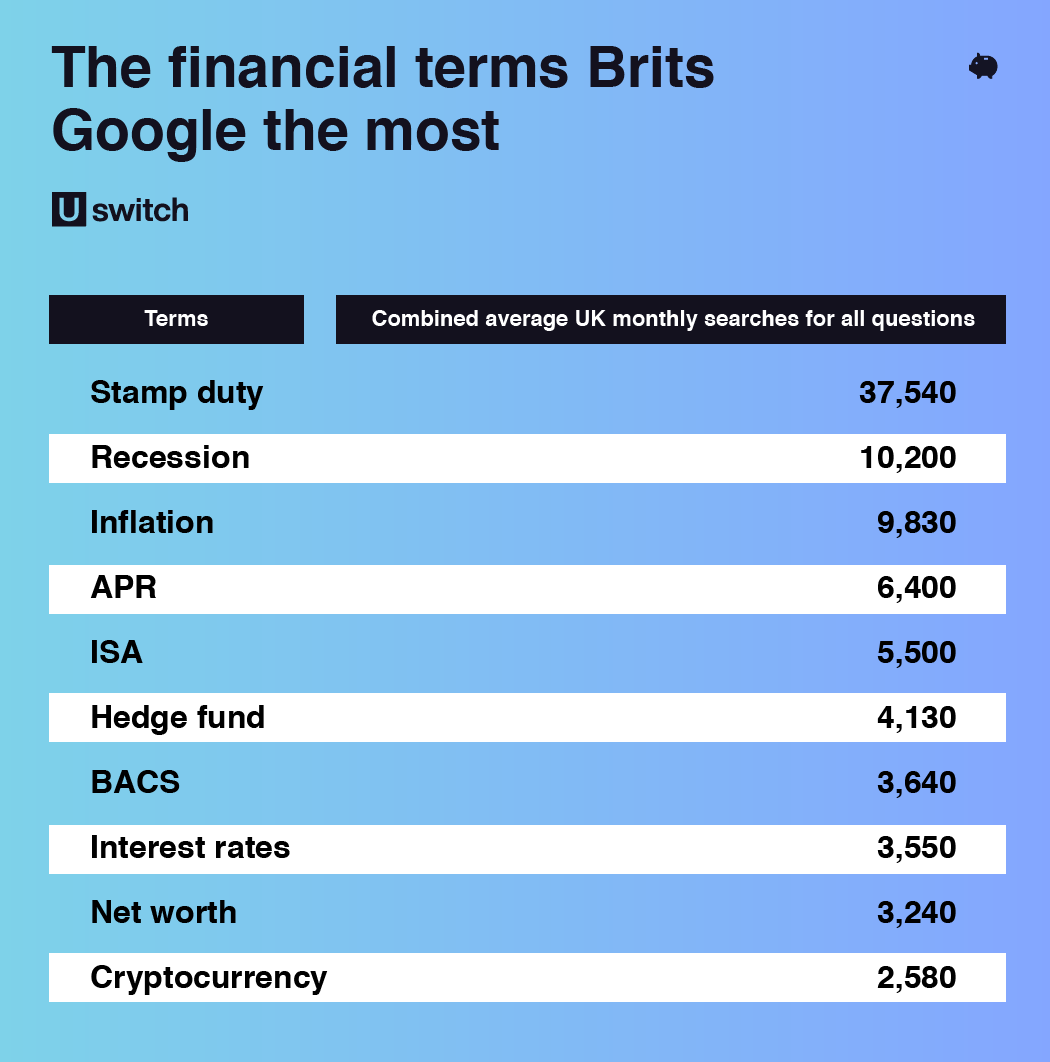 We found the most googled financial term to be ‘Stamp Duty’, which had a combined average monthly search volume of 36,540 in the UK alone. This suggests that the British population are most interested in learning what stamp duty is, and therefore that it is among the least understood financial terms for Brits. Like most mortgage jargon, stamp duty is likely a term that individuals will only come across when looking to become a homeowner.

The second most googled financial term was ‘Recession’, with the term’s definition searched for 10,200 times on average each month in the UK.

Numerous abbreviated financial terms also ranked as the most commonly searched, with APR, ISA and BACS, with 5,400, 5,500 and 3,640 searches made on average each month, respectively. The abbreviations stand for:

Interestingly, the tenth most searched for financial term was ‘Cryptocurrency’, which suggests that, with an average monthly search volume of 2,580, many Brits are keen to learn more about the digital, unregulated currency. In fact, the UK was the second most interested country when it came to finding out ‘How To Invest In Cryptocurrency’, second only to the United States. On average each month, the United Kingdom makes 600 searches for the query on Google, which is 12% of the average monthly searches made globally (5,200). 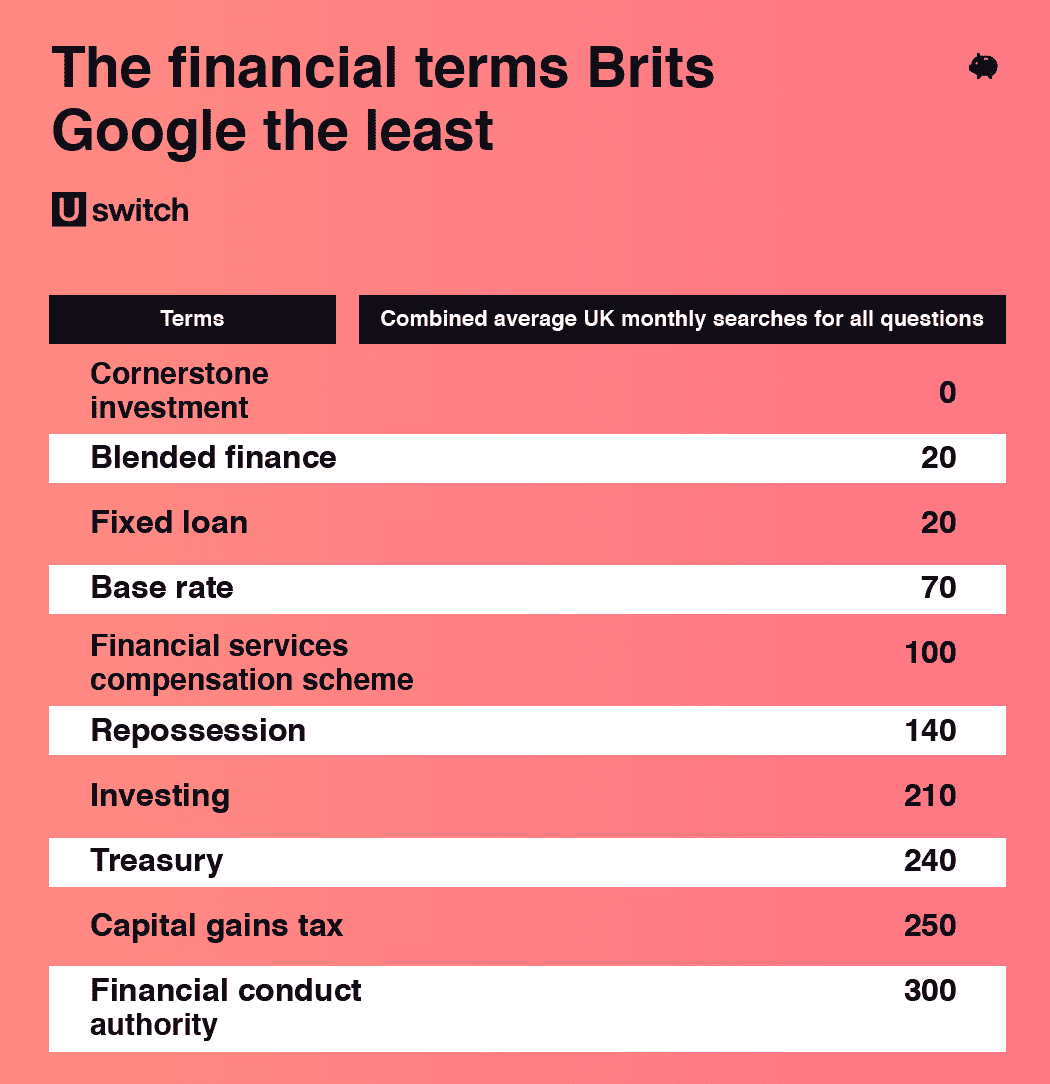 Despite being the least understood and least recognised financial term studied, ‘Cornerstone Investment’ was also the least searched for when it came to explanations and definitions, with an average monthly search volume of zero in the UK. The financial terms ‘Blended Finance’ and ‘Fixed Loan’ had a marginally larger interest, each receiving 20 searches on average each month for definitions and explanation, but still rank among the bottom 10.

Meanwhile, the third least searched for financial term was ‘Base Rate’, which is used to describe the interest rate used by banks and lenders when they borrow from the Bank of England. Despite the fact that the base rate influences most interest rates and therefore affects most individuals, the term received one of the lowest amounts of attention online, with just 70 searches on average each month in the UK. 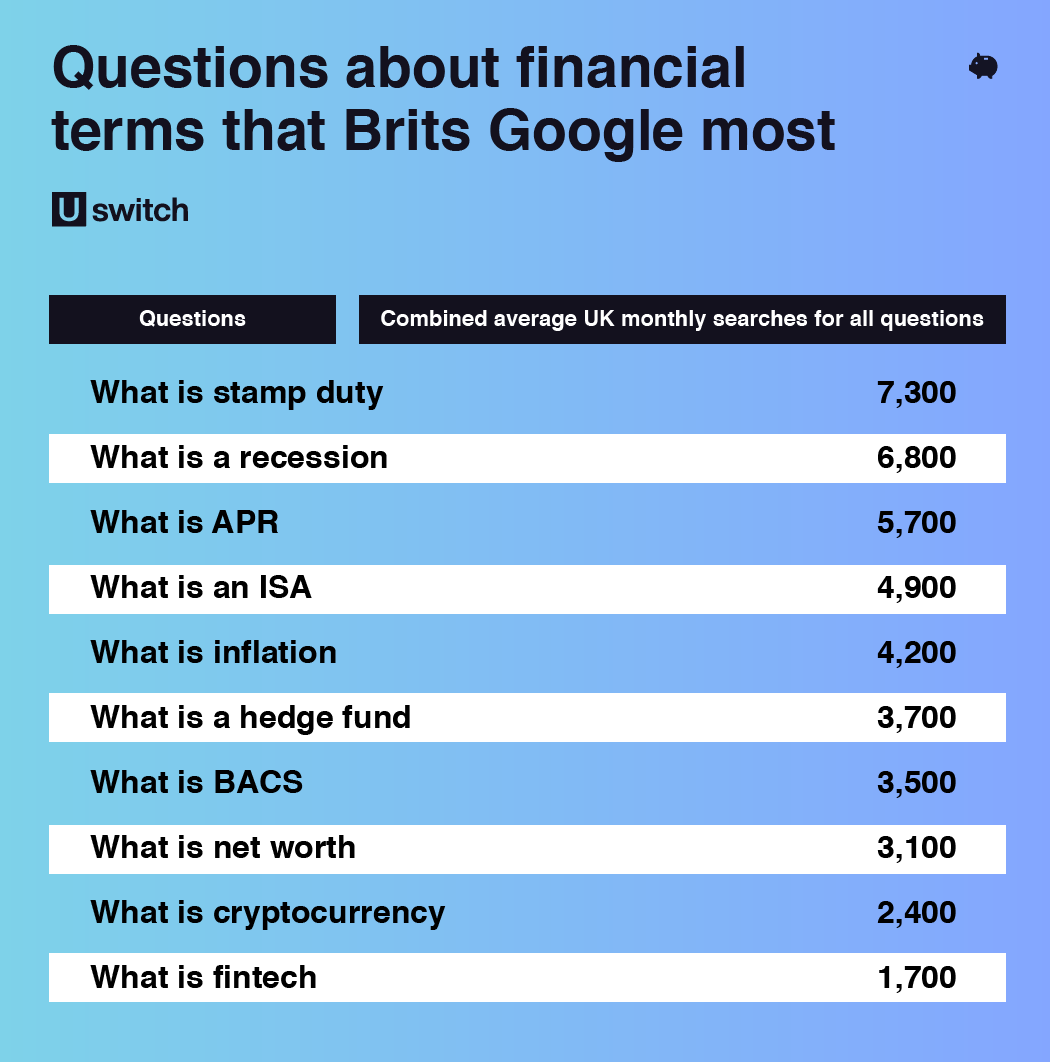