How much does a new boiler cost?

Your gas boiler may be the single most important item in your home, particularly around winter. So, when it comes to maintaining your boiler or boiler replacement, it's essential to get it right.
Share this guide 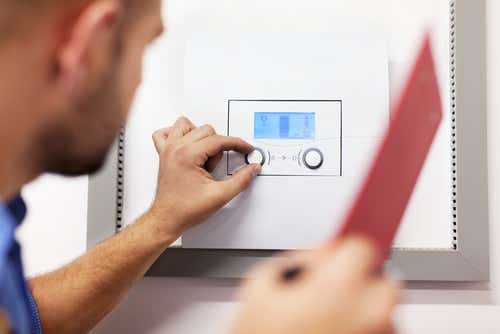 The cost of replacing your gas boiler will exceed £1,500 and could even rise as high as £5,000. But if your current boiler is 10 years old or more, it’s probably adding hundreds of pounds a year to your gas bill because it’s so inefficient. With this in mind, when is the right time to replace your existing boiler, and what should you look for in a newer model?

Read on to discover what a new boiler will cost UK consumers, whether or not it's worth replacing, and how long it will take for the investment to pay for itself.

How much is a new boiler?

While you can purchase a new gas boiler for as little as £600, that won’t include the cost of fitting it, along with any other additional work that may need doing if you’re not simply swapping out your old boiler for a new one.

A new gas boiler’s cost can be broken down into various parts: the price of the boiler itself, the cost involved in fitting it, plus any add-ons, such as the control system or any extra work required like fitting new pipes or altering existing ones.

How much does a standalone boiler cost?

According to recent UK boiler statistics, you can expect to pay anywhere from £600 to £2,500 for your replacement boiler. Budget boiler replacements cost around £600-£900, while premium models cost £1,300 upwards.

When you compare boiler prices, it’s tempting to choose the cheapest model to save money, but this is likely to be a false economy. Cheaper boilers are less powerful, and so suited to smaller properties – boilers rated 24-30kw are suitable for homes of up to three bedrooms; larger houses require a boiler of 35kw or more.

The surveyor visiting your home should make an appropriate recommendation based on your home’s type (such as terraced or detached), the number of bedrooms and bathrooms, and even its location.

No, these will be added to your boiler replacement cost and integrated into the overall quote. Typical labour costs come to £300 per day per fitter. Most standard jobs – swapping like for like – can be completed in under a day by a single person, while more complicated jobs, such as converting from a back boiler to a combi or system boiler – will take two days or maybe more.

What other costs are there?

You may be charged for additional required equipment, such as new or replacement pumps or valves along with the control system if switching from one type of boiler to another. Other optional extras may include fitting wireless smart control systems (around £200), as well as boiler magnetic filters and a chemical cleanse of your existing pipes to improve the efficiency of your system (anything from £300 to £500).

If the job requires it, you’ll also be charged for the cost of moving your boiler – this would include laying new pipes and may involve some building work.

All of these additional costs should be itemised and included in the quote.

How much does it cost to convert a regular boiler to a combi boiler?

Upgrading a regular or system boiler to a combi adds a premium of around £800 to £1,200 on top of the standard boiler cost, bringing a typical cost to between £2,500 and £4,500 depending on other factors. The cost of upgrading includes the full removal of your old boiler and water cylinder and upgraded pipework where required. The additional cost comes from the extra time and engineers required.

There’s an additional premium of around £500 if you’re switching from a back boiler to a combi boiler – partly because this usually involves moving your new boiler to a different location. This brings the typical cost of a back boiler upgrade to somewhere between £3,000 and £5,000.

How long will a new boiler last?

Modern condensing boilers are designed to last up to 10 years, subject to how well they’re maintained. Make sure you get yours serviced annually by a registered Gas Safe engineer, which will ensure you don’t void your warranty.

How long does it take to recoup the cost of a new boiler in savings?

While cost isn’t the only factor in purchasing a new boiler, you’ll want to know how long it’ll take for the boiler to pay for itself in savings on your gas bill.

Replacing an old inefficient boiler with a new one means you can expect to save some money — how much depends on your old boiler. Check your current boiler’s rating – older boilers can have lower than 50% efficiency, while the newest condensing boilers should exceed 90% efficiency. That difference is startling – with an old G-rated boiler, you could effectively be wasting 40% of the money you spend on them. That means for every £1,000 you spend on gas, up to £400 could be essentially thrown out of the window. And as energy costs spiral, so too does the amount you’re wasting – upgrading now could easily recoup £600-800 over the next 12 months alone.

According to the Energy Saving Trust, here's what you can expect from a new gas boiler with an A rating and thermostatic radiator controls:

Figures are based on fuel prices as of October 2022.

How long it takes your boiler to recoup its cost will depend on its cost divided by the annual savings it delivers. So, for example, if you pay £3,000 for a new boiler, and it reduces your bills by £400 a year, then it will have paid for itself after 7.5 years.

How can I save money on a new boiler?

The first thing to do is get multiple quotes. You’re not obligated to buy a boiler from your energy company – companies like British Gas have large overheads, and those costs will be passed on in the form of higher quotes. However, make sure you only get quotes from Gas Safe-registered engineers.

Another way to save money is to do some of the prep work yourself if you’re DIY-proficient. For example, removing existing furniture and clearing space around where the boiler will be fitted.

Don’t move your boiler unless it’s really necessary. A straight swap with minimal disruption will always be cheaper as pipework won’t need to be added or altered.

Also look to maximise the savings you’ll make from your new boiler. That could mean a slightly higher outlay to get the best setup for your needs. Get expert advice on which size and/or type of boiler is best for your home. The extra savings you make will soon wipe out any additional cost.

Also look to employ smart technology, such as Wi-Fi enabled thermostats, which give you full control over your new system. This allows you to squeeze more savings out of your energy bills.

Things to do before you buy a new boiler

Before you rush out to buy a new boiler there are plenty of other steps you can take to cut your heating costs without splashing out.

A new boiler is a big investment, so it can take a while to make your money back in savings. Here are a few cheaper measures that you could take to cut your heating bill:

Have your boiler serviced. A service will make sure that it's running properly and can eliminate lots of problems. Read our boiler maintenance tips for some simple measures you can take yourself to help your boiler run better.

Get new heating controls - a new thermostat, thermostats (thermostat radiator valves or TRVs) on your radiators, a new timer, and new radiators could all help.