The last couple of years has seen us all rely on broadband more than ever, whether shifting to home working, keeping in touch with friends and family, or just bingeing yet another box set.
Share this guide

However, experiences of using the internet around the world can vary quite drastically. Factors such as infrastructure, investment and the overall size of a country can all potentially affect the performance of the internet.

But which of the world’s developed countries has it best when it comes to getting online, both in terms of the broadband speed connections, and affordability?

If your own broadband isn’t performing, or if you feel like you’re overpaying, be sure to compare our best broadband deals to see what else is available.

The OECD countries with the fastest broadband 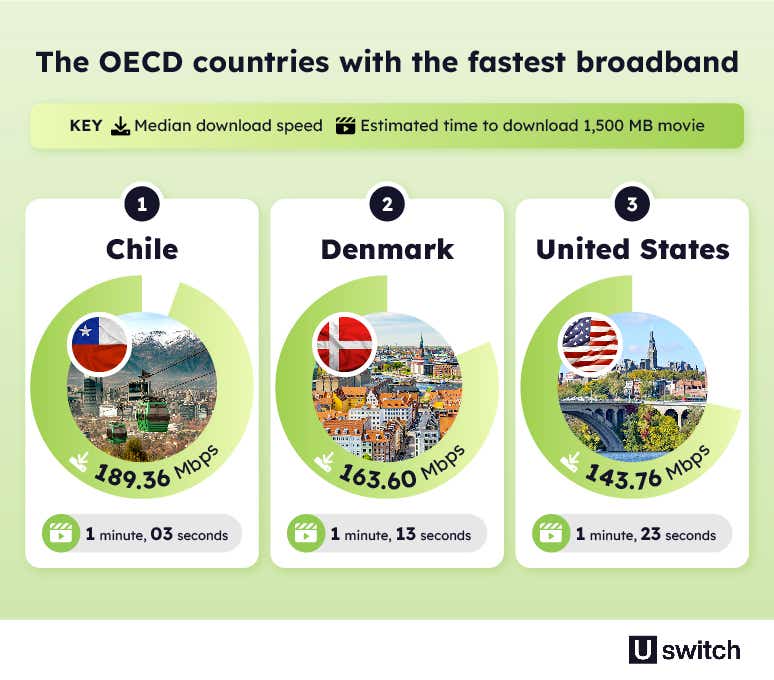 OECD stands for Organisation for Economic Co-operation and Development and includes 38 countries.

The country with the fastest internet speeds overall is Chile, with a median download speed of 189.36 Mbps. To put that into context, this means it would take just over a minute to download a HD film with a file size of 1,500 MB.

The internet speed here in Chile is over 100 Mbps higher than the OECD average of 84.42 and is over seven times quicker than in the slowest nation, Turkey.

Coming in second, with an average speed of 163.60 Mbps, is Denmark, where the time to download a film is ten seconds slower than in Chile.

Denmark is slightly unique as a developed country when it comes to internet access, as it’s one of the few countries where internet access is largely run by a single company (TDC). Having said that, residents still enjoy good speeds and fair prices.

The third fastest nation in terms of average download speeds is the United States, where the average speed stands at 143.76 Mbps and it would take an estimated 1 minute and 23 seconds to download a HD film.

Considering that the US is such a huge country, with lots of rural areas where it’s typically harder to establish a quick connection, an average speed of over 140 Mbps is quite impressive!

The OECD countries with the slowest broadband 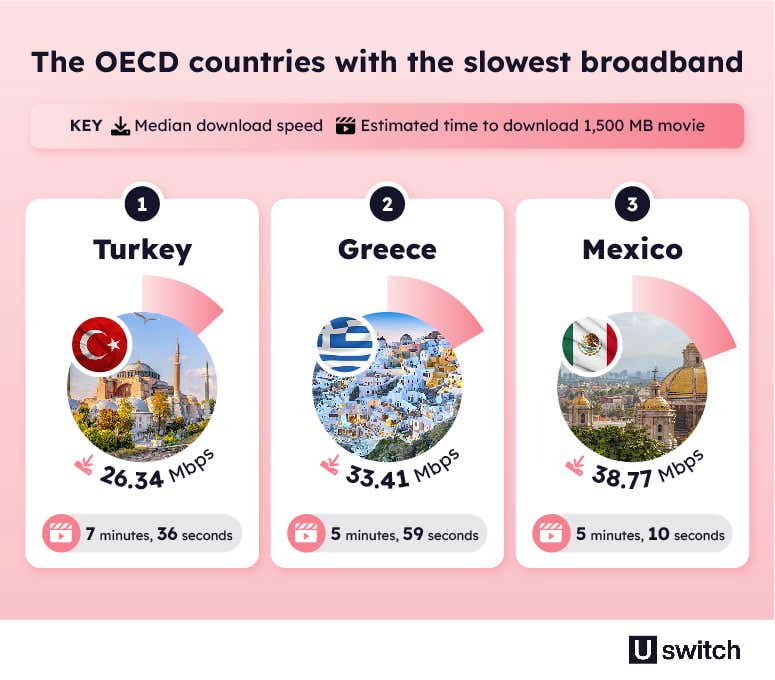 At the other end of the spectrum, by far the OECD country with the slowest average internet connection is Turkey, with a median download speed of just 26.34 Mbps.

That’s around seven times slower than in Chile and means that to download a standard HD film would take over two hours.

Turkey’s Aegean neighbours in Greece have the second slowest internet speeds, with a median download speed of 33.41 Mbps.

While that’s slightly quicker than Turkey, to download a film here would still take an average of 1 hour, 45 minutes.

Not far behind Greece is Mexico, with an average download speed of 38.77 Mbps.

Mexico has one of the highest rates of internet usage in Latin America, with demand surging, but is seemingly lagging behind when it comes to average download speeds.

The OECD countries with the most affordable broadband 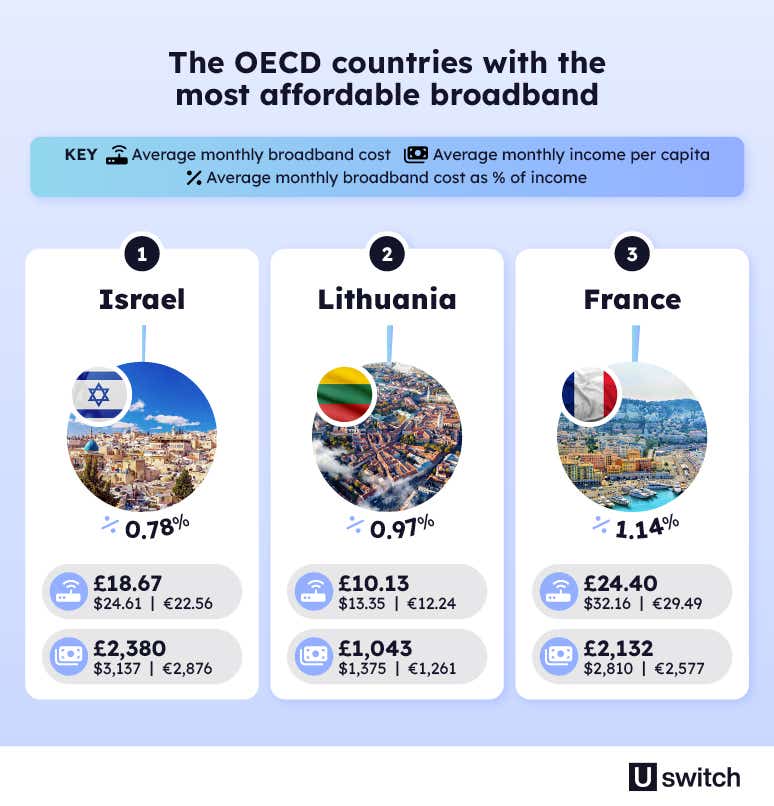 While a monthly broadband subscription can be as low as £8.71 per month in some countries, when we take local earning power into account, it’s Israel that ranks as the most affordable. Israel has an average broadband package costing just 0.78% of the average monthly income.

Israel is different to most countries when it comes to its internet, due to the way their internet service providers and companies are structured.

In second place is Lithuania, where the monthly cost of internet is £10.13 and takes up just under 1% of the average income for the month.

The internet in Lithuania is amongst the most developed in Europe, with an average speed of 79.81 Mbps.

France comes in third place, with a monthly broadband package being equal to 1.14% of the average monthly income of £2,132.

Intense competition between a number of different Internet service providers means that a good broadband connection in France is relatively affordable compared to many other nations.

The OECD countries with the least affordable broadband 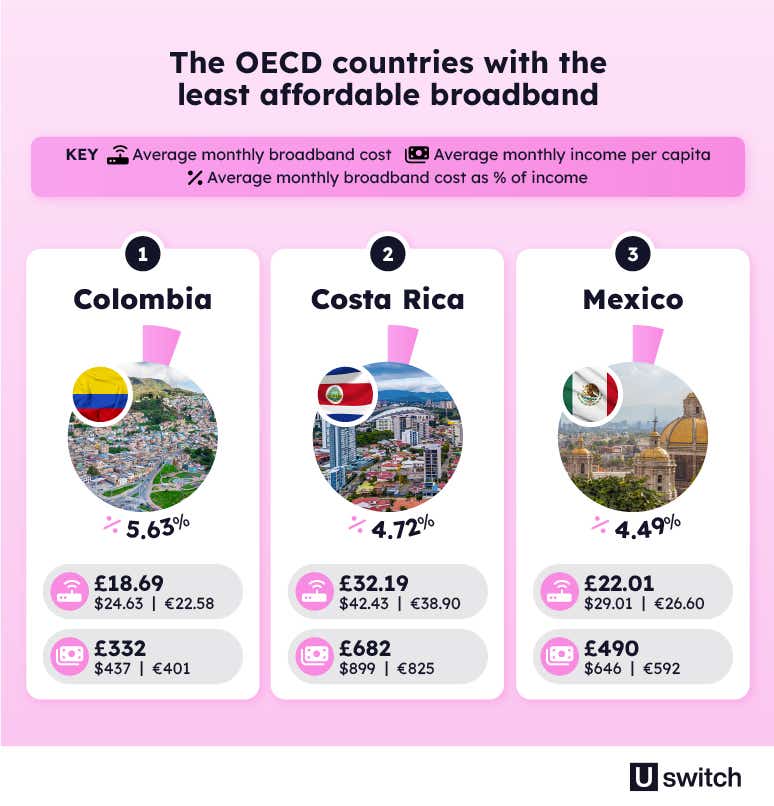 When it comes to the least affordable nations for broadband, one in particular sticks out. Those in Colombia have to pay an average monthly broadband cost of £18.69 which represents 5.63% of income.

While the cost itself may not be that high in comparison to many other countries, the fact that earnings are so low in the country makes this the least affordable place for broadband.

The second least affordable country is Costa Rica, where both earnings and internet prices are higher than in Colombia, but with the monthly costs taking up 4.72% of income.

As well as having the third slowest internet speeds of OECD countries, Mexico also has the third least affordable, with broadband costs taking up 4.49% of monthly income.

Mexico has been highlighted as a ‘hypergrowth’ market for internet suppliers and is the Spanish speaking country with the highest number of internet users in the world.

“It's fair to say that we have become increasingly dependent on reliable broadband over the last few years. While many people have made the switch to working from home, a record number of people have also turned to the internet to stay entertained and connected.

“It’s interesting to see that the UK ranks only 26th for median download speed, averaging less than the top ranking country, Chile. The download speed in the UK means it would take 3 minutes and 15 seconds to download a 1500MB film, whereas in Chile it takes just 1 minute 3 seconds to download the same size movie. These figures demonstrate that the UK still has a long way to go in terms of offering fast and reliable speeds.

“With a reliable connection quickly becoming a fundamental backbone of almost every aspect of life, the need for seamless broadband connectivity grows even stronger. If your own broadband isn't up to scratch, or you feel like you're overpaying, then be sure to compare our ultrafast broadband deals to determine your options".

The countries with the fastest & slowest broadband

The countries with the most & least affordable broadband

The average cost of broadband per month was sourced from Cable.co.uk’s worldwide price comparison. The average monthly income per capita was then taken from the World Bank (dividing annual income by 12) before this was used to estimate the broadband costs as a percentage of income.

Figures were converted from USD to GBP and EUR using exchange rates from XE as of March 7th 2022.

For both sections, only member countries of the OECD were included, with Iceland excluded from the average download speeds section due to a lack of data.