The best value broadband connection in the US

With many people still working from home, and the rise of virtual events and competitive gaming since before the pandemic, a strong and reliable internet connection has never been more important.
Share this guide

Experts at Uswitch have analysed each US state on both their average cost of broadband deals, and average download speeds, to reveal which have the best value broadband.

As well as revealing the states with the fastest and cheapest broadband, the index also shows which parts of the US have the lowest access to fibre optic, cable, and DSL internet.

With many people still working from home, and the rise of virtual events, competitive gaming and blockbuster movies on streaming platforms since before the pandemic, a strong and reliable internet connection has never been more important.

If you are searching for cheap broadband and fast connection speeds in the UK, then be sure to compare broadband providers to find the best broadband deals in your area.

The US states with the best-value broadband 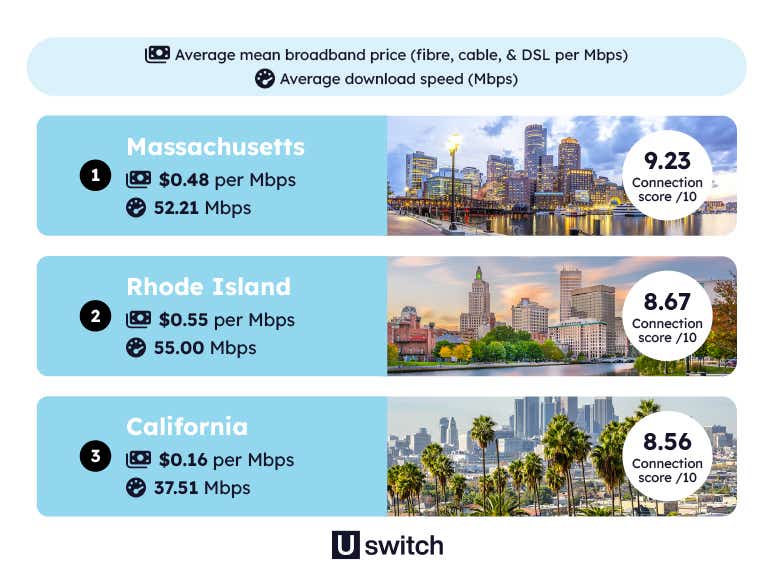 Rhode Island hits second place for best value internet connection. With a low average mean price of $0.55 per Mbps, the state offers an excellent average internet speed of 55 megabits per second, earning it a value score of 8.67/10.

California offers the third best value broadband coverage in the US, with a value score of 8.56/10. California has one of the lowest average costs across fibre, DSL and cable of just $0.16, while offering a very reasonable 37.51 Mbps download speed for this price. 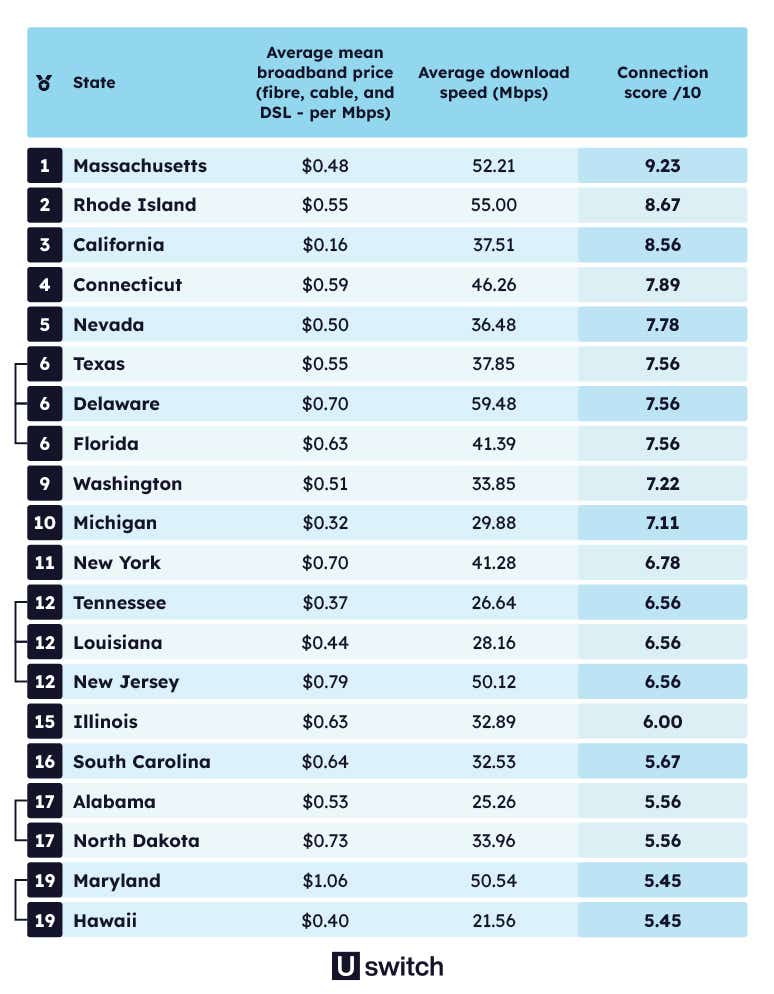 The states with the cheapest fibre optic broadband in the USA 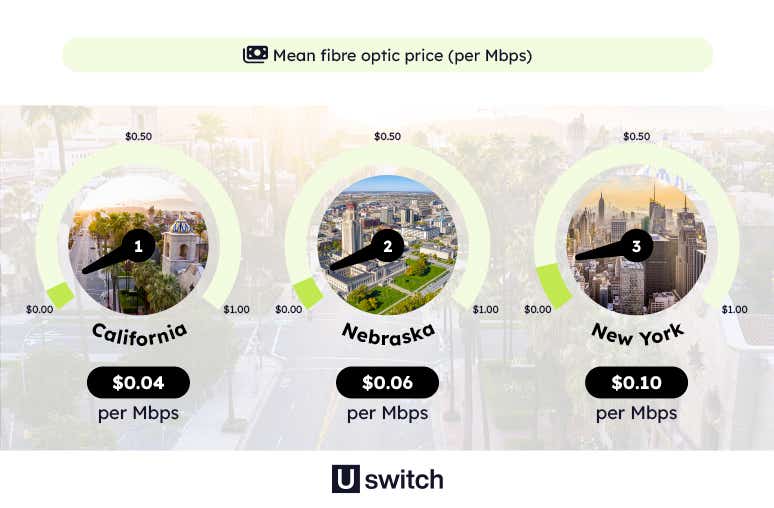 Fibre optic is one of the fastest options when it comes to broadband, and while it was initially very expensive, is now becoming more affordable.

But which states are the cheapest if you’re looking for the fastest and most reliable connection possible?

California ranks number 1 for the cheapest average fibre optic cost in the US, with an average cost of just $0.04 per megabit per second.

The runner-up for the cheapest fibre optic internet connection cost is Nebraska, with an average cost of $0.06 per megabit per second.

New York, the state with the best value for money fibre optic internet connection, ranks third for cheapest Wi-Fi in the US, with an average of $0.1 per megabit per second. 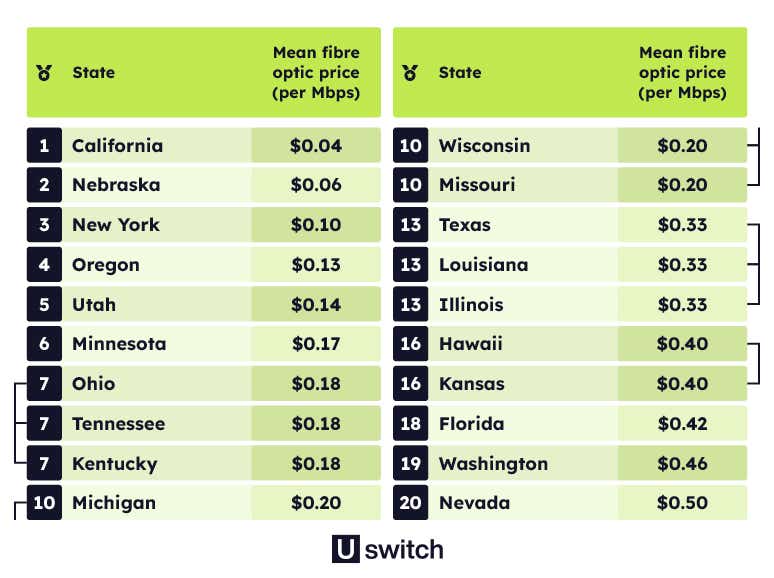 The states with the cheapest cable broadband in the USA 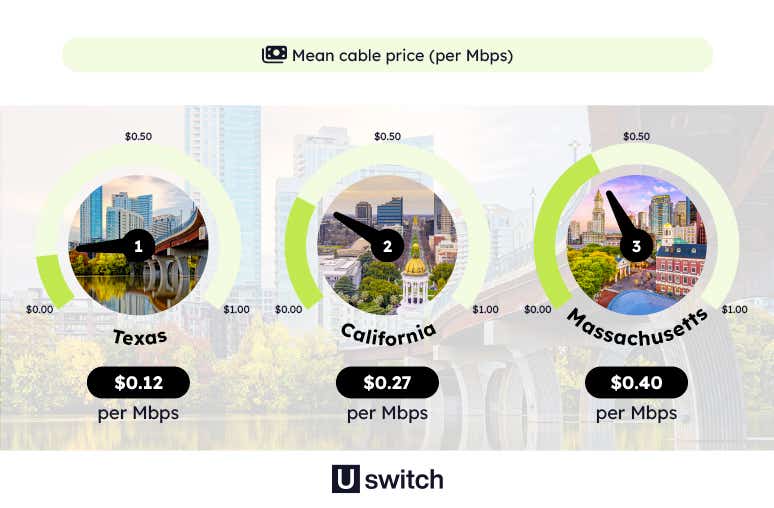 Cable broadband works in a similar way to fibre optic, but it differs in the type of cables used to connect your home.

While it doesn’t quite match up to full-fibre connections, it still offers a fast and reliable connection. Here are the states where cable broadband is the most affordable per Mbps.

Texas offers the cheapest cable broadband in the US by far, under half the price of the runner-up on this list. Texas offers cable at an average of $0.12 per Mbps.

Runner-up for cheapest cable broadband is California, which offers an excellent average cost of cable of $0.27 per Mbps.

Massachusetts takes the third spot for cheapest cable broadband, offering an average of $0.40 per Mbps for cable to its residents. 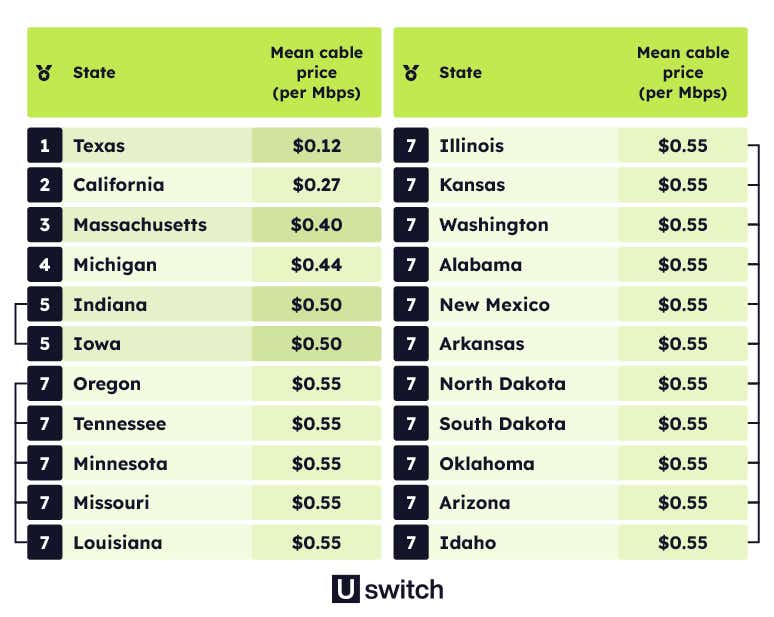 The states with the cheapest DSL broadband in the USA 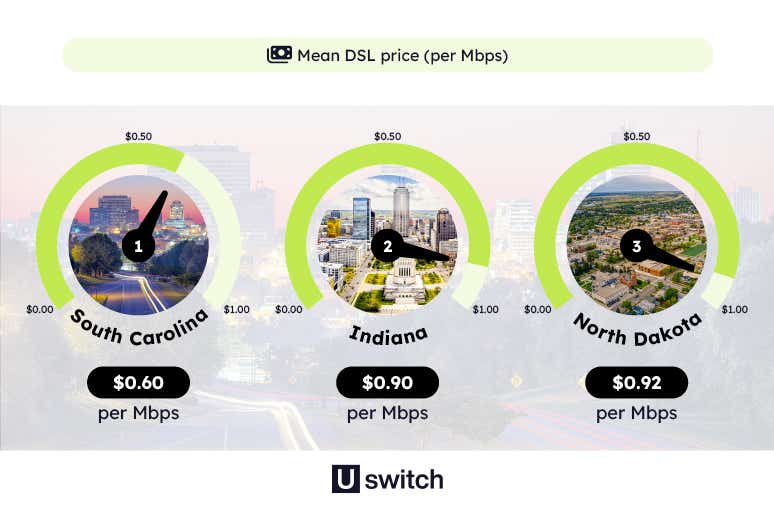 DSL broadband connects you to the internet via your telephone line and is amongst the cheapest options.

However, the speed of a DSL connection isn’t as good as with fibre or cable, although it is still capable of reasonable speeds.

South Carolina is the best state to be in for cheap DSL broadband. South Carolina offers DSL at an average rate of $0.60 per Mbps.

Indiana offers DSL at a mean of $0.90 per Mbps for its residents, making Indiana the second cheapest state for DSL broadband.

In third place for cheapest DSL is North Dakota, which offers DSL at an average rate of $0.92 per Mbps. 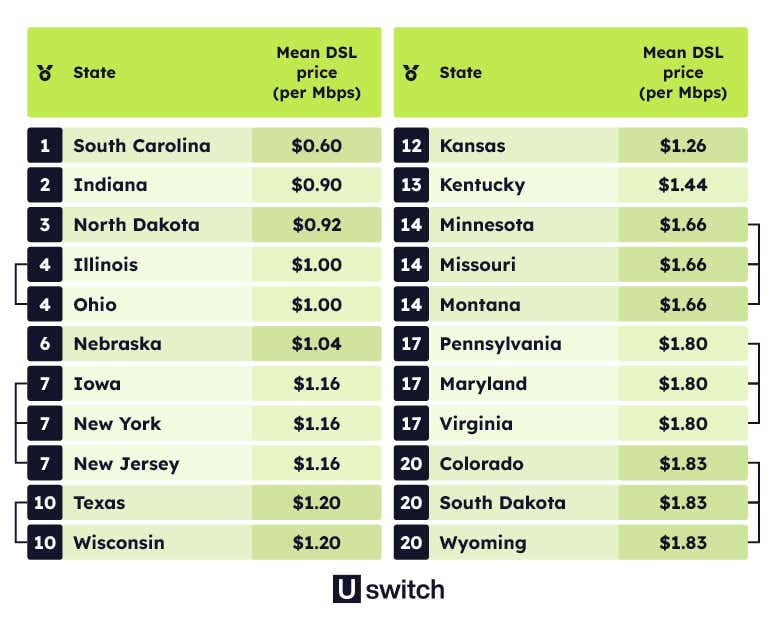 The states with the fastest broadband in the USA 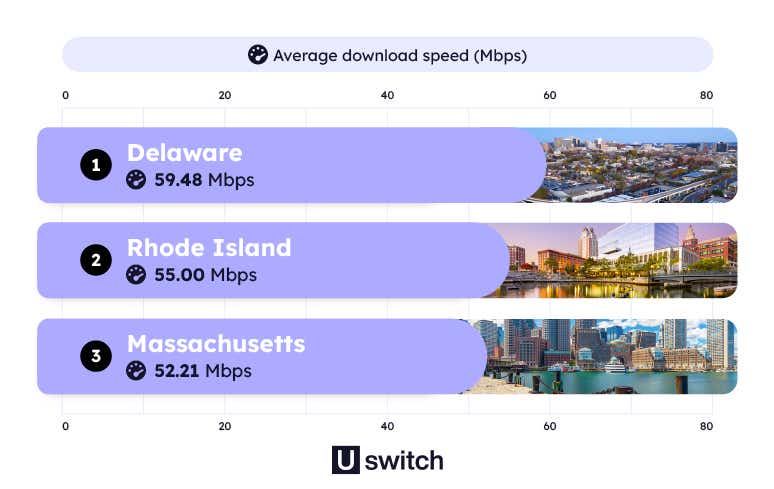 The cost of broadband is just one side of the coin, and it’s important to also consider the average speeds.

This is measured in megabits per second and varies considerably around the US. Here are the fastest states overall by Mbps.

Delaware earns the top spot for fastest download speed in the US, with speeds reaching an average of 59.48 megabits per second. 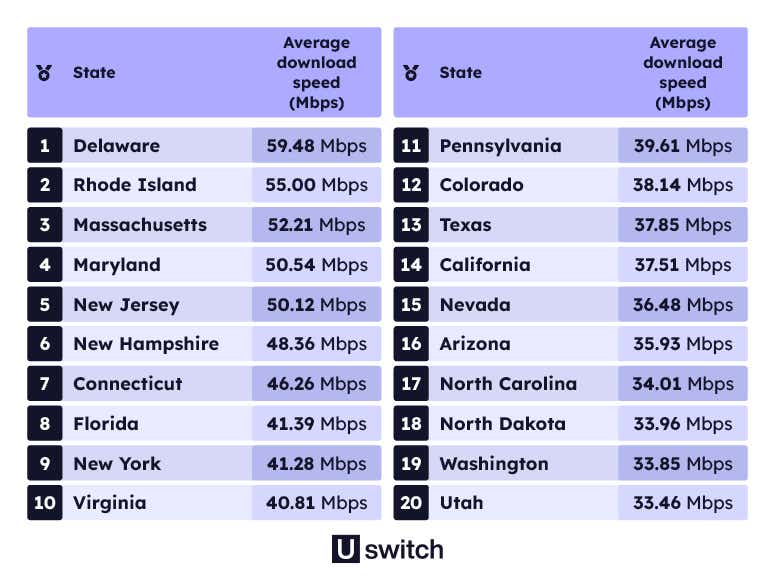 States with the worst broadband coverage 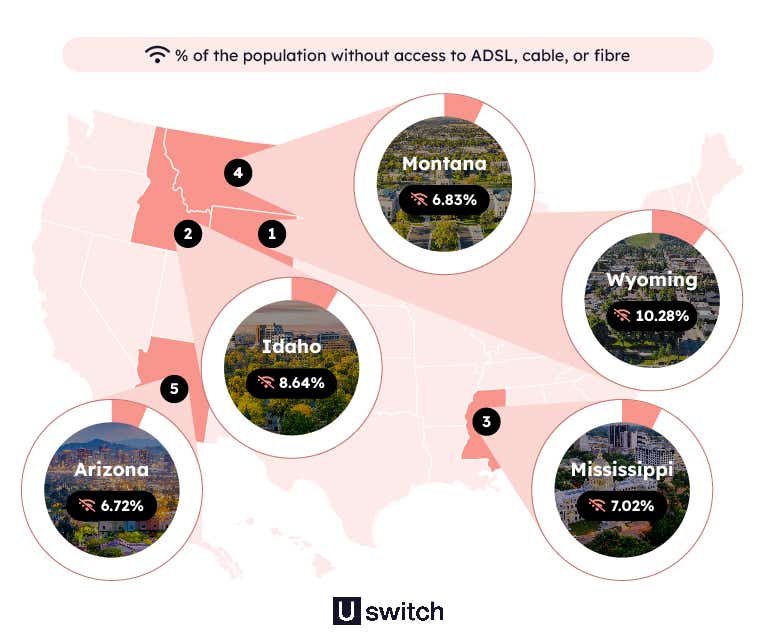 Living in an area where it can be hard to get a fast internet connection can be extremely frustrating for internet users wishing to get online.

By analysing 2020 data, the states with the greatest percentage of the population without access to ADSL, cable, or fibre connections, even at the lowest speed level, have been revealed.

Wyoming is the state with the most internet blackspots, with 10.28% of Wyoming’s population not having access to ADSL, cable, or fibre connections.

Idaho sees a population blackout percentage of 8.64%, with around 155,000 Idaho residents without access to ADSL, cable, or fibre providers.

3. Mississippi - 7.02% of the population without access to ADSL, cable, or fibre

The state with the third-highest rate of internet blackouts is Mississippi, with just over 7% of Mississippi’s population reportedly without at least 1 provider of ADSL, cable, or fibre.

Montana ranks as the fourth-worst US state for fibre optic coverage, with 6.83% of the population without access to ADSL, cable, or fibre connections.

Rounding off the top five states with the most connection blackouts is Arizona, with 6.72% of residents going without access to even one ADSL, cable, or fibre provider. 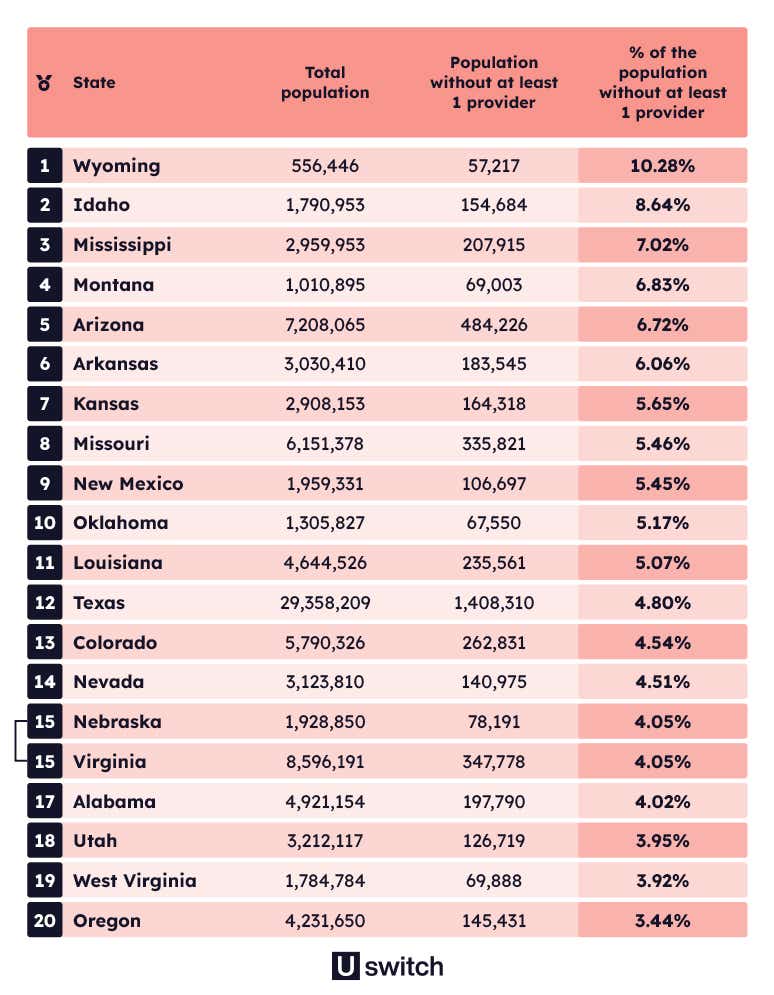 *of ADSL, cable, or fibre

Broadband expert Catherine Hiley, at Uswitch comments: “It's fair to say that we have become increasingly dependent on reliable broadband over the last few years, especially in the United States. While many people have made the switch to working from home, a record number of people have also turned to the internet to stay entertained and connected.

“With a reliable connection quickly becoming a fundamental backbone of almost every aspect of life, the need for seamless broadband connectivity grows even stronger. Unfortunately for states such as Wyoming and Idaho, where fibre optic connections are the worst in the country, access to fast broadband is limited.

“If, like residents of states such as Wyoming, your own broadband isn't up to scratch, or you feel like you're overpaying, then compare ultrafast broadband deals to determine the best options".

The fastest broadband in the USA can be found in Delaware, which has an average download speed of 59.48 Mbps.

Fibre optic is a type of broadband that offers a high-speed connection. It is called fibre optic as it uses this type of cable for transferring data.

Using both fibre and coaxial cables to bring broadband to your home, cable is one of the fastest ways to connect to the internet. Connection speeds can vary but generally go up to 1Gbps.

DSL refers to the digital subscriber line, this broadband type provides access to the internet via modems and telephone lines. A modem is hardware that sits between a computer and your connection to the internet.

To put it simply, DSL uses traditional phone lines to access the internet whereas broadband is the term used for high-speed internet services.

First, the average cost of a fibre optic broadband package in each US state was sourced using Broadband Search’s Cost of Internet by State in the USA.

Then, Fastmetrics was used to find the median download speed in each of these states from 2020. Download speed is an important metric for measuring residential broadband connections.

Finally, each state was given a normalised score out of ten for both its broadband price and speed and an average of these was taken to reveal where has the best value broadband (with a lower cost and higher connection speed scoring higher).

Then, using FCC Open Data from 2020, the percentage of people with access to 0 providers offering fibre-optic broadband in each state was sourced. Data was filtered to only record data from ADSL, cable, and fibre connections at speed level 0.2. State populations were also taken from the 2020 FCC Open Data.

*The average broadband speed in the US is calculated as an average of the average connection speed in each US state.