While the actors usually take the majority of the acclaim in a Hollywood blockbuster, it’s those on the other side of the camera who keep everything on track and bring their vision to life. But who are the very best film directors in the world?
Share this guide 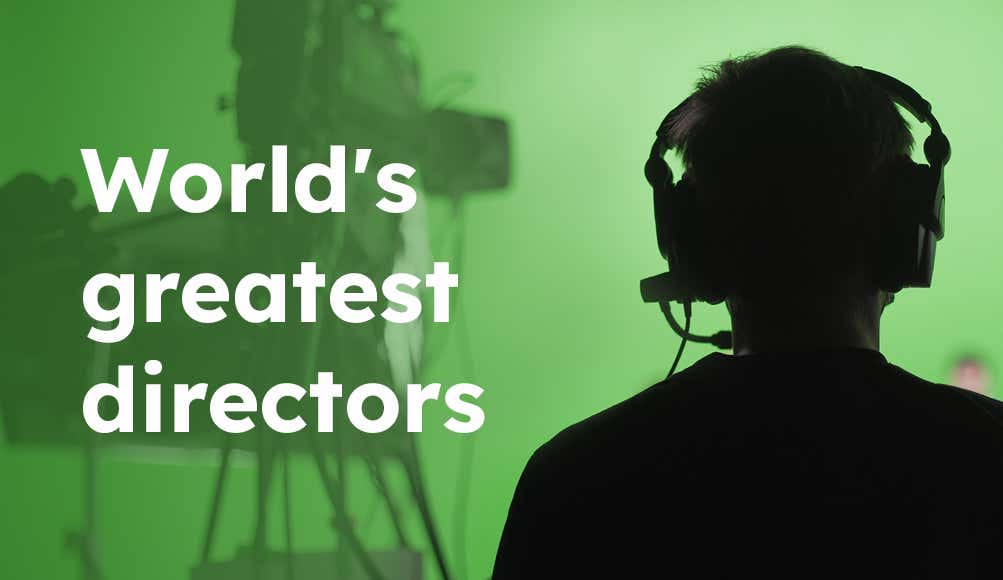 If you regularly stream movies, the first important step to make is to compare broadband suppliers to decide which is best for your needs, but after that, it’s time to decide what to watch!

Once upon a time, only a small group of directors could realistically claim to be household names, but these days, the likes of Spielberg, Campion, Scorcese,Tarantino and DuVernay are arguably bigger stars than many of the leading men and women that they cast in their movies.

But which are the very best directors in the business? While everyone has their own favourites and their own opinions on what makes a great director, our rankings based on the number of awards won, critic and audience reviews, and box office success might help to separate the great from the greatest.

And for the best streaming experience when watching films by your favourite director, be sure to compare the best broadband deals.

Upon looking into the highest-grossing and most successful directors in Hollywood, one thing that stands out is the lack of women on the list.

Unfortunately, there has long been a significant gender gap in terms of both landing top directing jobs and equal pay for female directors. aAnd our initial analysis confirmed this, with the vast majority of the most successful films being helmed by men.

However, that’s not to say that there aren’t great films being produced by women and there is early evidence that the gap might be narrowing slightly.

Jane Campion recently became the first woman to land two nominations for Best Director at the Oscars and other directors such as Greta Gerwig and Chloé Zhao have released acclaimed films. 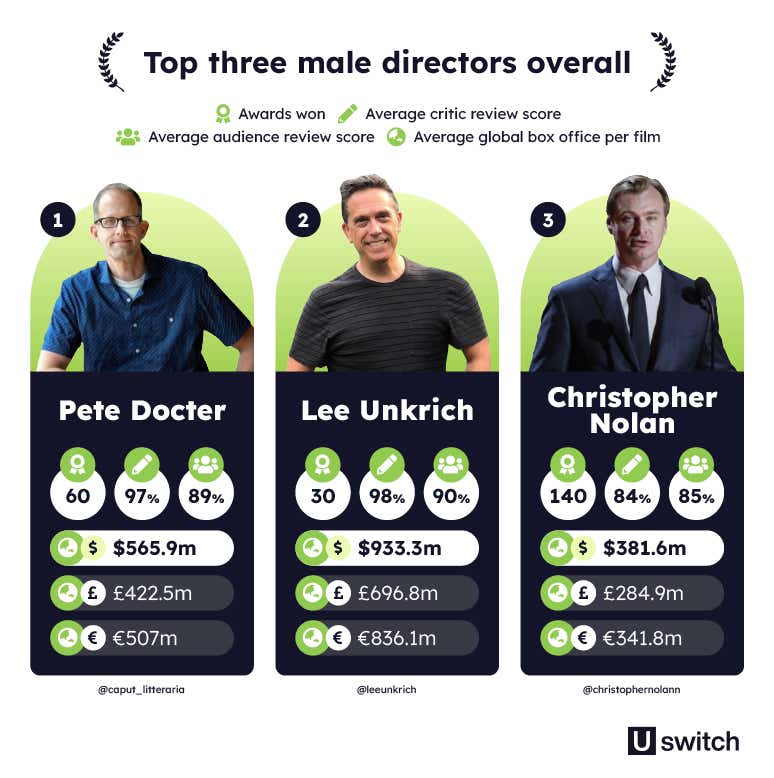 The highest-ranking name might not be an instantly recognisable one, but you’ll certainly know his films.

Pete Docter is the chief creative officer at Pixar and has directed Monsters, Inc., Up, Inside Out, and Soul, which is amongst the highest-rated films of all time on Rotten Tomatoes, winning Docter 60 major awards including three Oscars for Best Animated Feature.

Another Pixar employee takes second place, showing the incredible consistency of the studio when it comes to producing highly rated and highly profitable films.

Lee Unkrich has directed Toy Story 2, Finding Nemo, Toy Story 3, Coco, and Monsters, Inc. (alongside Pete Docter) and has since retired from Pixar, but leaves with a very impressive track record!

The highest-scoring director to have predominantly made their name in live-action films is Christopher Nolan, who has won a staggering 140 major awards including 11 Academy Awards from 36 nominations.

In a career spanning over 30 years, Nolan’s films have consistently garnered high praise from critics and audiences alike, from Memento to The Dark Knight Trilogy and more recent works like Interstellar, Dunkirk, and Tenet. 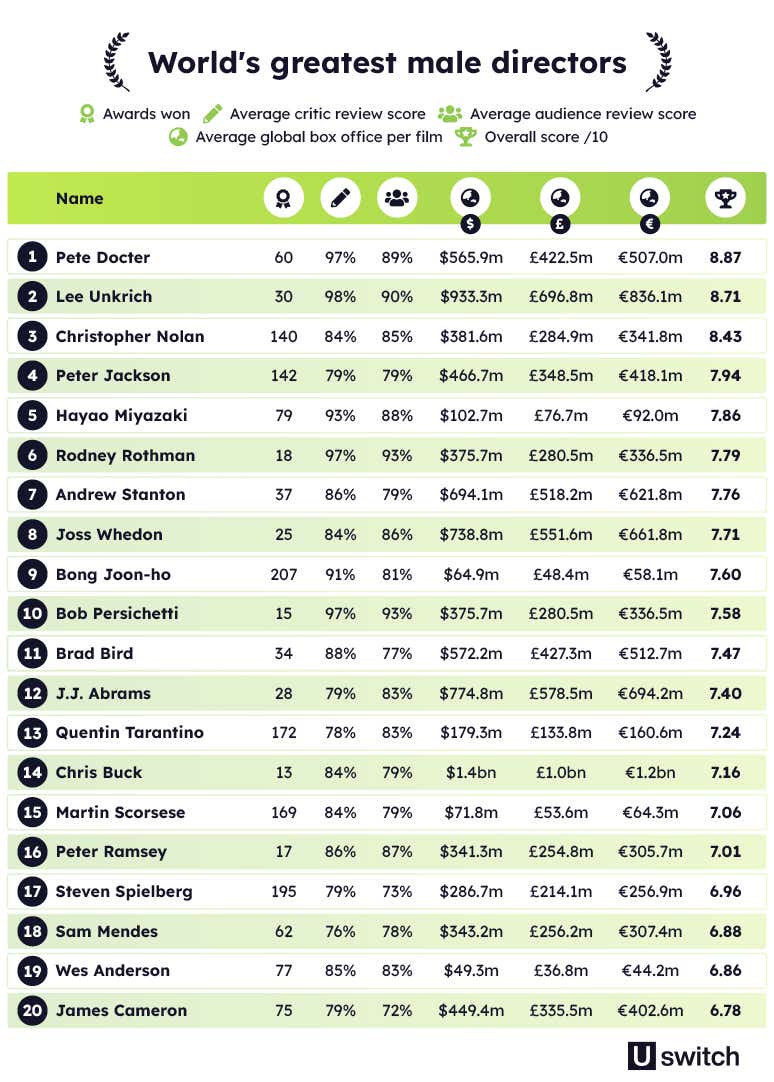 The best male director for… 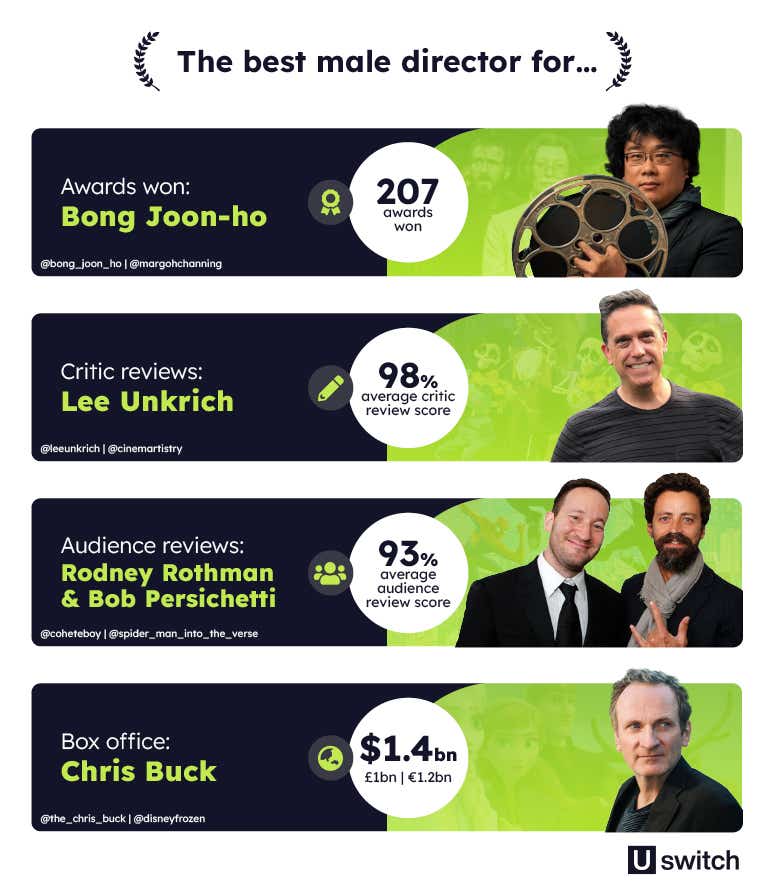 Industry awards such as the Academy Awards and the Palme d’Or are a big indication of a director’s influence and success, and the most awarded of all time is Bong Joon-ho, with 207 award wins in total.

What makes Bong’s success even more incredible is the fact that his films are primarily in his native language of Korean, but have still seen huge popularity in the Western world.

The most successful of these was Parasite, which won three Academy Awards and was the first non-English language film to win Best Picture.

Despite not necessarily being a household name, as a long time member of the creative team at Pixar, Lee Unkrich was been behind some of the highest-rated films of all time, having directed Toy Story 2, Monsters, Inc., Finding Nemo, Toy Story 3, and Coco.

None of those films received an average score of less than 96% on Rotten Tomatoes, with his directorial debut Toy Story 2 earning a perfect score of 100%.

However, it’s not all about the views of movie critics, and the most popular directors with fans continue the trend for animated movies receiving high praise.

Rodney Rothman & Bob Persichetti have only directed one feature film, but it was a hugely successful one. Spider-Man: Into the Spider-Verse scored 93% with fans on Rotten Tomatoes, and was the first non-Disney/Pixar film in seven years to win Best Animated Feature at the Oscars.

When it comes to financial success, another pair of animated directors prove to be the most successful.

Chris Buck is one of the two writers and directors of Frozen and Frozen II, which anyone with children will know are amongst some of the biggest movies of the last decade, each taking in excess of a billion dollars at the box office. 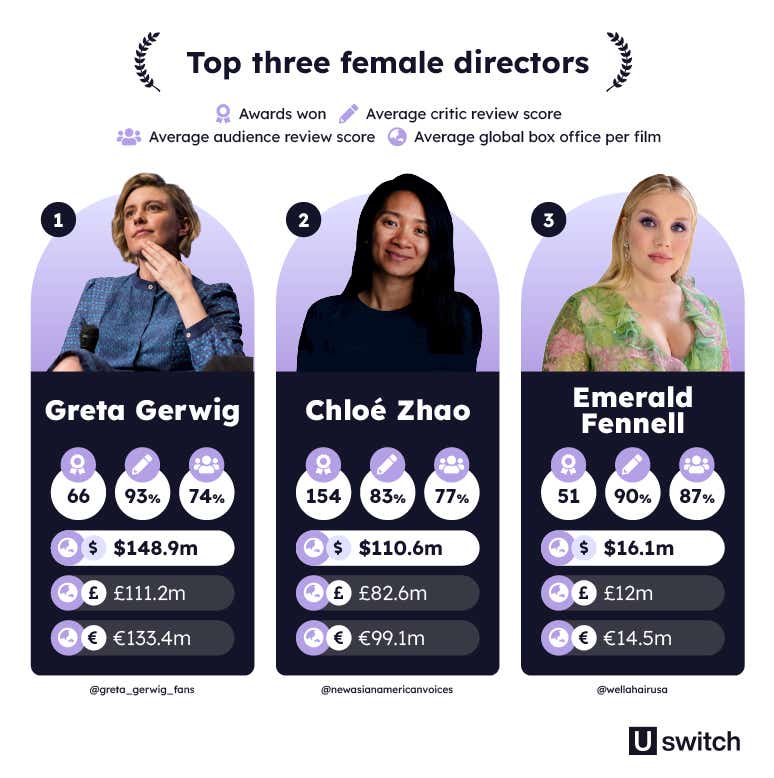 Female directors in Hollywood have unfortunately been a rare sight in the past, but it’s been good to see that a rising number of the best and most successful films in recent years have been helmed by women.

Greta Gerwig ranks the best in this regard. Previously known for her acting work, Gerwig has directed two solo films by the age of just 38, both of which were critically acclaimed: Lady Bird and Little Women.

Having previously carved out a strong reputation for her work in independent films such as Songs My Brothers Taught Me and The Rider, Chloé Zhao gained mainstream recognition for Nomadland.

The 2020 film won awards including Best Picture and Best Direct at the Academy Awards, contributing to 154 awards in total.

Her ranking could be even higher, although her first blockbuster Eternals, part of the Marvel Cinematic Universe, was met with a more mixed reaction to her earlier work.

While Emerald Fennell’s average box office takings aren’t quite as high as others on our list, she more than makes up for it with the high critical acclaim that her films have enjoyed.

Previously gaining fame as both an actress and as showrunner on TV’s Killing Eve, she has since directed two highly-rated films: Careful How You Go and How Promising Young Woman.

The latter won the Academy Award for Best Original Screenplay and made her the first British woman to be nominated for Best Director.

The best female director for… 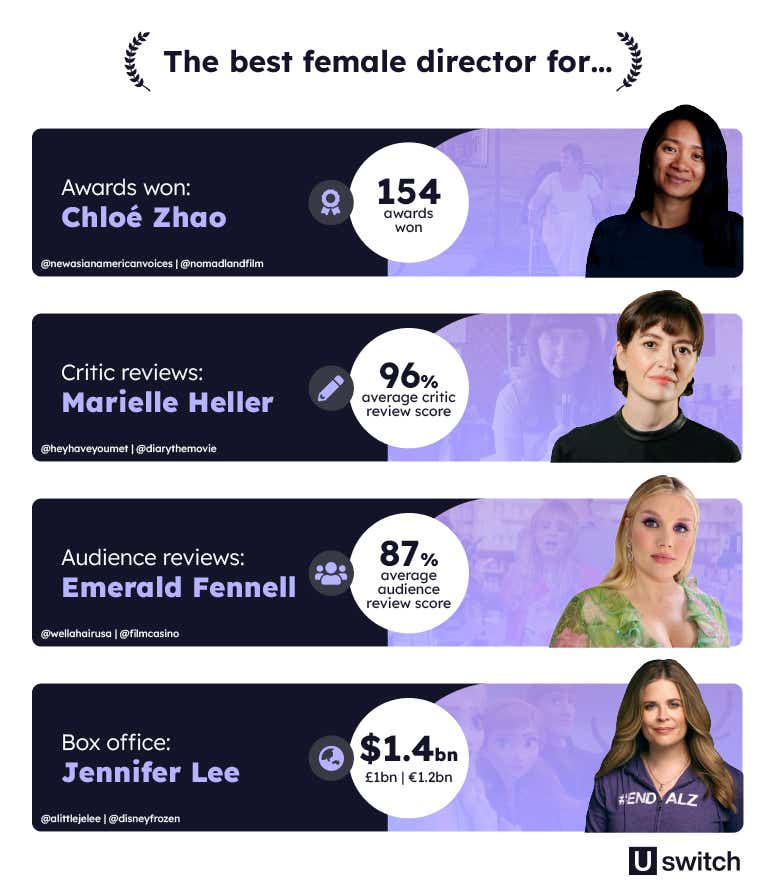 In her still relatively young career, Chloé Zhao has picked up an incredible 154 major awards.

The majority of these came after the release of Nomadland, including arguably the two biggest prizes on offer, Best Picture and Best Director at the Oscars, as well as awards at the Directors Guild of America Awards, Golden Globes, and BAFTAs.

You might know Marielle Heller for playing Alma Wheatley in The Queen’s Gambit, but she also has a hugely impressive resume as a director.

Heller has directed three feature films and a filmed play, each of which has received a score of at least 95% on Rotten Tomatoes.

When it comes to the films that are most loved by moviegoing fans, it’s Emerald Fennell who comes out on top, with her directorial debut Promising Young Woman receiving praise for its direction and screenplay (which she also wrote).

The sheer bankability of the Frozen movies sees Jennifer Lee come out on top when it comes to the most successful films financially, with the two films in the series grossing an average of $1.4 billion. 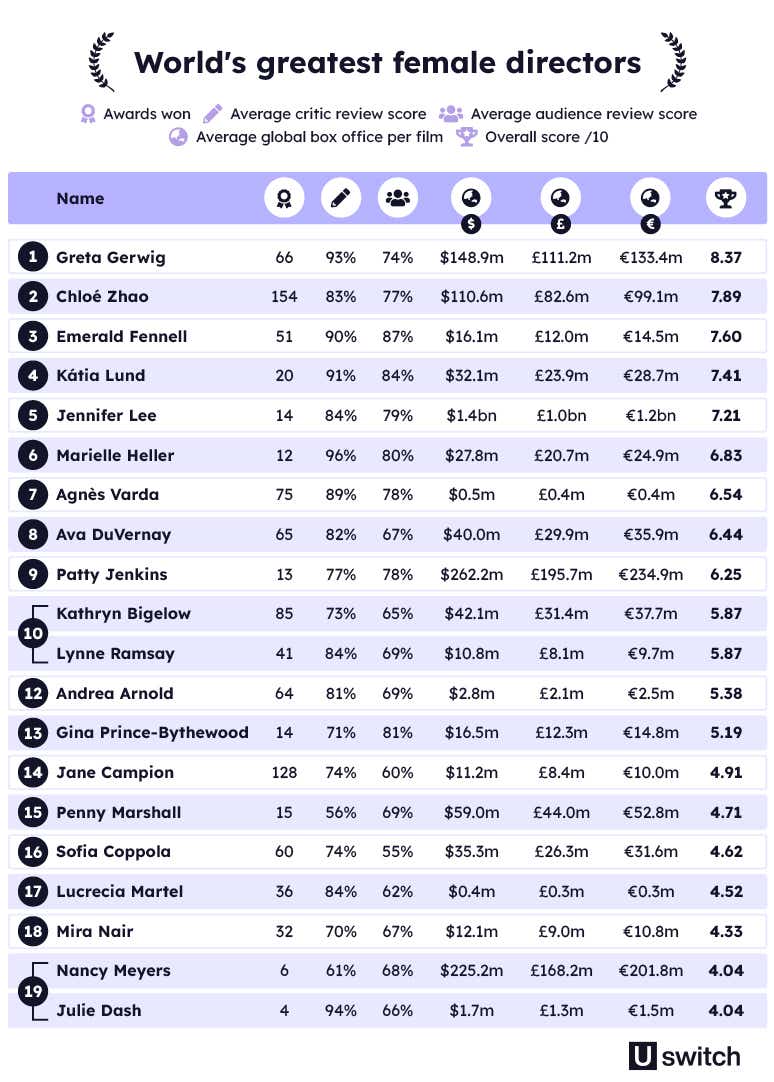 “Recognised as being one of the world’s oldest entertainment mediums, the film industry has developed an extraordinary index of legendary directors. One thing that stands out though is the lack of recognised female directors, however, that's not to say there aren't fantastic films being produced by both male and female directors alike.

“From Greta Gerwig, director of the critically acclaimed Lady Bird and Little Women, to Pete Doctor, the director of Pixar wonders such as Monsters Inc, Up and Soul - the catalogue of great directors today is remarkable, and it's good to see early evidence showcasing the 'slightly' narrowing gap between male and female directors.

“If you want to enjoy the works of such directors from the comfort of your own home, you will need to ensure that you have a strong broadband connection. A fibre connection of 30Mbps or more will provide for a buffer-free movie experience, allowing you to relax, sit back with your popcorn, and enjoy the on-screen masterpieces”.

A list of 75 of the top directors was created using the highest rated movies on IMDb’s Top 250 Movies list, the highest-grossing directors according to The Numbers, as well as various articles and rankings of directors.

The following four factors were analysed, with a normalised score out of 10 being given for each factor before taking an overall average across each of the scores.

The number of major awards the director was won, according to IMDb, includes both awards for films directed by each director such as ‘Best Picture’ awards, as well as individual awards such as ‘Best Director’.

The aggregate critic review score for all movies directed by the director listed on Rotten Tomatoes.

The aggregate audience review score for all movies directed by the director listed on Rotten Tomatoes.

The average worldwide box office per film according to The Numbers (unadjusted for inflation).