Where in the UK has the most blue badge related parking offences?

Is your region a top offender for blue badge parking offence?
Share this guide

Blue Badge Offences: Where in the UK has the most blue badge related parking offences?

This offence is punishable by a fine in the UK, and continued motoring offences could lead to losing your licence and increasing car insurance premiums. Across the country there are many blue badge related parking fines issued every day. But where in the country has the most? By asking councils for information regarding the number of blue badge related parking fines that were issued in the past year, we are able to reveal the area with the most blue badge offences. 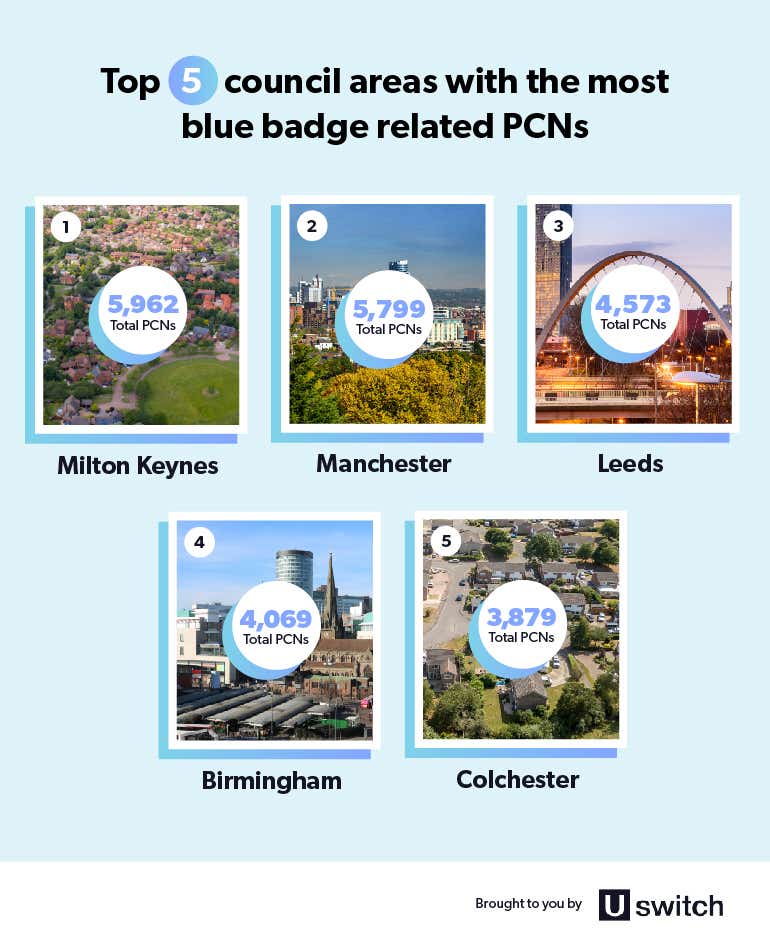 The new town of Milton Keynes was the place with the highest number of blue badge related PCNs handed out to motorists, which is an incredible statistic when taking into account the small size of the town compared to other areas on the list.

We know the residents of Manchester are often on the hunt for the cheapest cars to insure due to it being the second most expensive place in the country to insure your car, but they’re still happy to risk a fine for parking in a disabled space! Manchester has the second highest number of blue badge related PCNs issued with 5,799. This is only 163 less than Milton Keynes, but Manchester is a much bigger city.

Across the Pennines in Yorkshire the city of Leeds saw 4,573 blue badge related PCNs issued. ‘Pro rege et lege’ is the latin motto of the city, which means ‘for king and the law’, and when it comes to the laws surrounding blue badge parking offences Leeds city council are very strict.

The UK’s second city is only fourth when it comes to the number of blue badge related PCNs issued. In Birmingham there were just over 4,000 issued, which is almost 2,000 fewer than Milton Keynes.

When Colchester was known as Camuldonum by the Romans it was the capital of the country, and at that time it was home to the only known purpose built chariot racing venue in the country. Despite this history of wheeled transportation, the people of Colchester still struggle not to park in disabled spaces as 3,879 total PCNs were handed out. 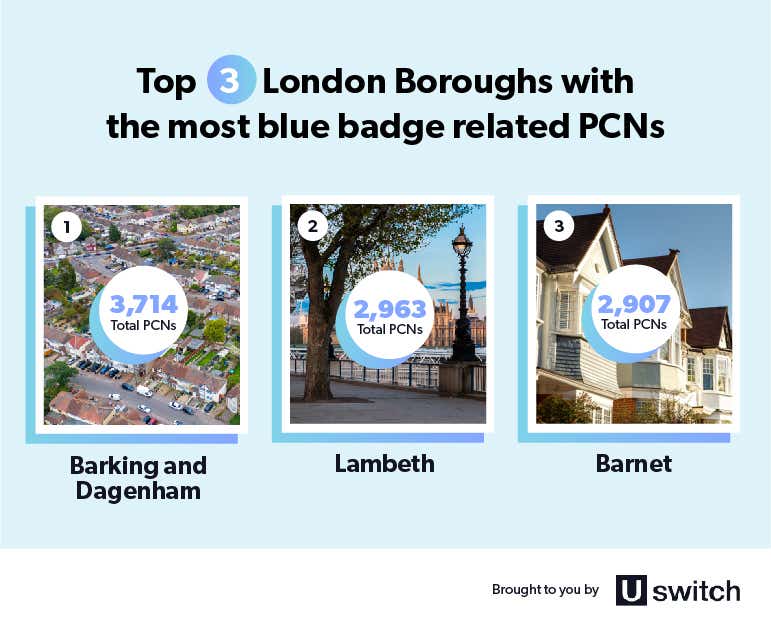 The London borough with by far the highest number of total blue badge related PCNs is Barking and Dagenham with 3,714 in total. Only 78 of these were for off street offences, whereas a whopping 3,636 were on the road.

Next, is the borough of Lambeth where 2,963 total PCNs were issued in relation to blue badge offences. Despite Lambeth being a much smaller borough than those around it, it still managed a very high ranking.

Only just behind in third place in the rankings is the outlying northern borough of Barnet, there were 2,907 total blue badge related PCNs handed out. This total is only 56 fewer than Lambeth to rank them as the third highest borough in London. 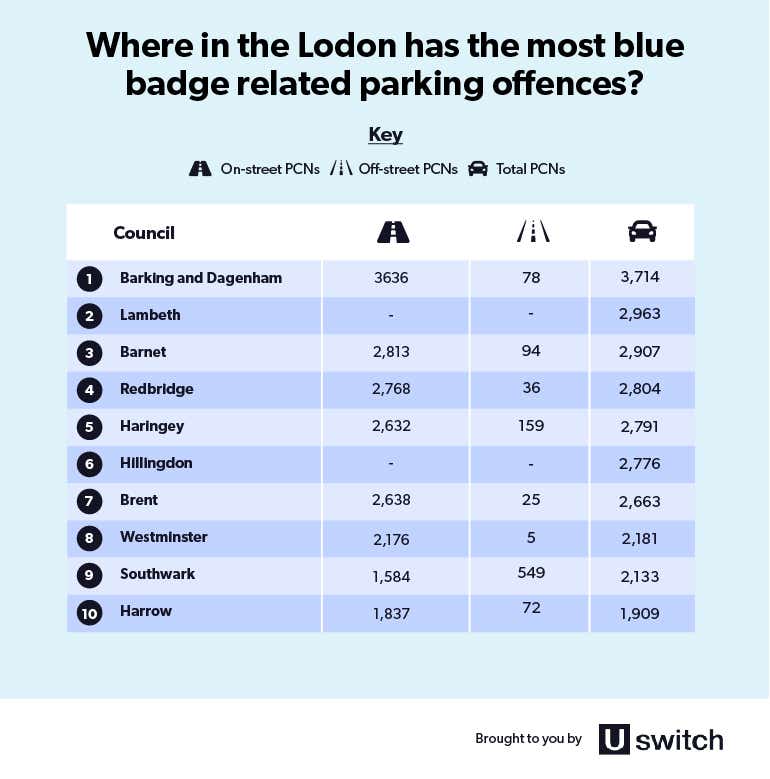 Why you shouldn’t park in a blue badge only space

1 - You could hamper a disabled person:

Blue badges are given out to people with disabilities, even if you can’t obviously see what that disability is at first glance. The Government does not just give out blue badges to anyone, and therefore illegally parking in them is only impairing the people who truly need to park closer to where they’re getting.

Moreover, disabled spaces are often wider than normal so that there is enough room for wheelchair access alongside a car, as well as room for people using crutches and walking frames to get into their cars. Forcing disabled drivers to use a standard sized space because you’ve parked illegally in a blue badge space can cause them a lot of unneeded hassle and possible injury.

When parking illegally in a blue badge space it is often effectively an admission of a lack of motivation to find a legitimate parking space or to walk a bit further from your car to the destination. Ergo, laziness. Even if a car park is full except for blue badge spaces, or if you are only staying a short while, you do not have any more right than normal to park in them. Unless there is a real urgent emergency, there is no permissible reason to park in a disabled space.

The initial fine for parking in a blue badge only parking spot is £70-£130, and although this might not sound like a lot it is a lot more than the few pence it would cost you in fuel to find another spot. If you do not pay a PCN it can increase up to £1,000, and eventually be treated as a civil debt and you can be pursued by bailiffs.

In conclusion, do not park in a blue badge space under any circumstances, not only could it financially impact you, but also seriously hinder the well being of someone who has genuine need of the space.

“The Blue Badge Scheme was introduced by the government to help those with severe mobility issues park close to where they need to go – allowing drivers to park on yellow lines for up to three hours or on the street for free where there are parking metres or disabled spaces.

“Drivers who abuse the Blue Badge policy could face a fine of up to £1,000. However, despite the risk of hefty penalties, it’s clear to see that the law is disregarded by many motorists, who will risk large fines simply to park for free or closer to their destination.

“This behaviour is inconsiderate towards Blue Badge holders who require these spaces to travel independently and get from A to B.

“Misuse of the Blue Badge Scheme includes using badges that are no longer valid, use of a valid badge by a person who is not authorised and using a badge that has been reported lost or stolen.

“Policies are enforced by the local council in each area. Milton Keynes Council were the most effective enforcers, issuing more than 5,900 fines, the highest amount of penalties in the UK.