Supercars are out of the realms of affordability for most of us. But for all of that money, you’d also surely be expecting a top-quality vehicle that you can rely on. So Uswitch has discovered which models are the most unreliable.
Share this guide

Supercars are some of the most beautiful cars on the planet and are seen as the peak of car ownership, but they’re also the most expensive, and that’s before you even consider the cost of car insurance.

Even non-petrolheads can admire the beauty of a passing Ferrari or Lamborghini, but for all of that money, you’d also surely be expecting a top-quality vehicle that you can rely on.

However, a supercar can break down just like any other car, or even worse, be recalled by the manufacturer.

So, which supercars are the most unreliable? To find out, we’ve ranked some popular models on the number that pass their MOT first time, the number that have been recalled, and reviews in the motoring press. 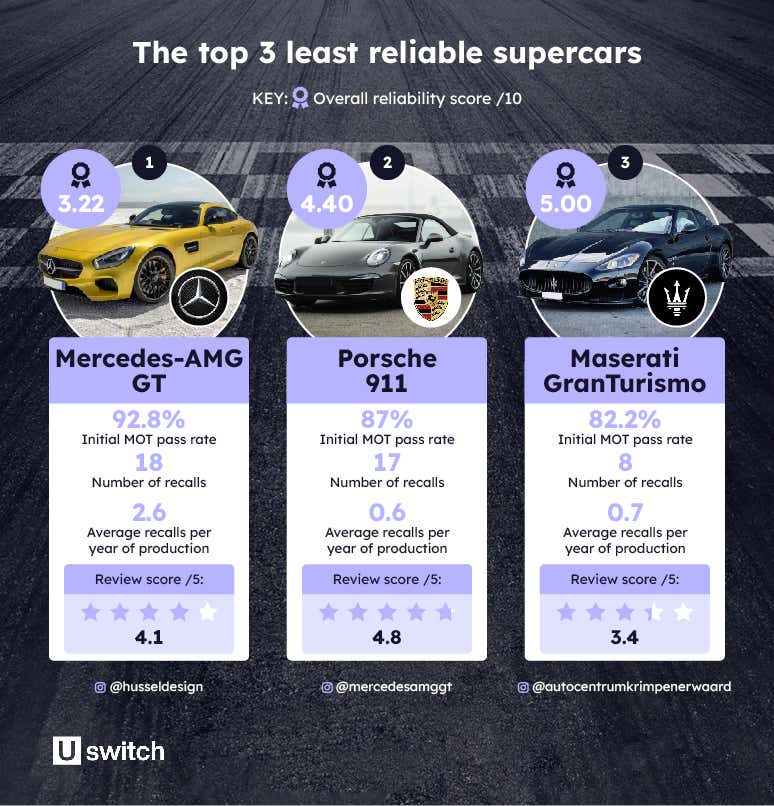 The Mercedes-AMG GT is an impressive car, but it came at the bottom of our rankings, largely due to the number of times it has been recalled, with 18 instances (2.6 for each of the seven years it has been in production). However, the GT also performed relatively poorly on its industry review score, with 4.1 (with most supercars scoring 4.5 or over).

Probably the most recognisable Porsche of all time, the 911 has been in continuous production since 1964 and despite a very impressive review score of 4.8 out of 5, ranked as the second-least reliable car on our list due to a high number of recalls and relatively poor MOT pass rate, with just 87% passing first-time.

The third-least reliable supercar on our list was the Maserati GranTurismo, which had the lowest industry review score, at 3.4 out of 5, as well as a relatively low MOT first time pass rate of 82.2%. The GranTurismo is a grand tourer that set a record for being the most quickly developed car in the industry, going from design to production in just nine months. 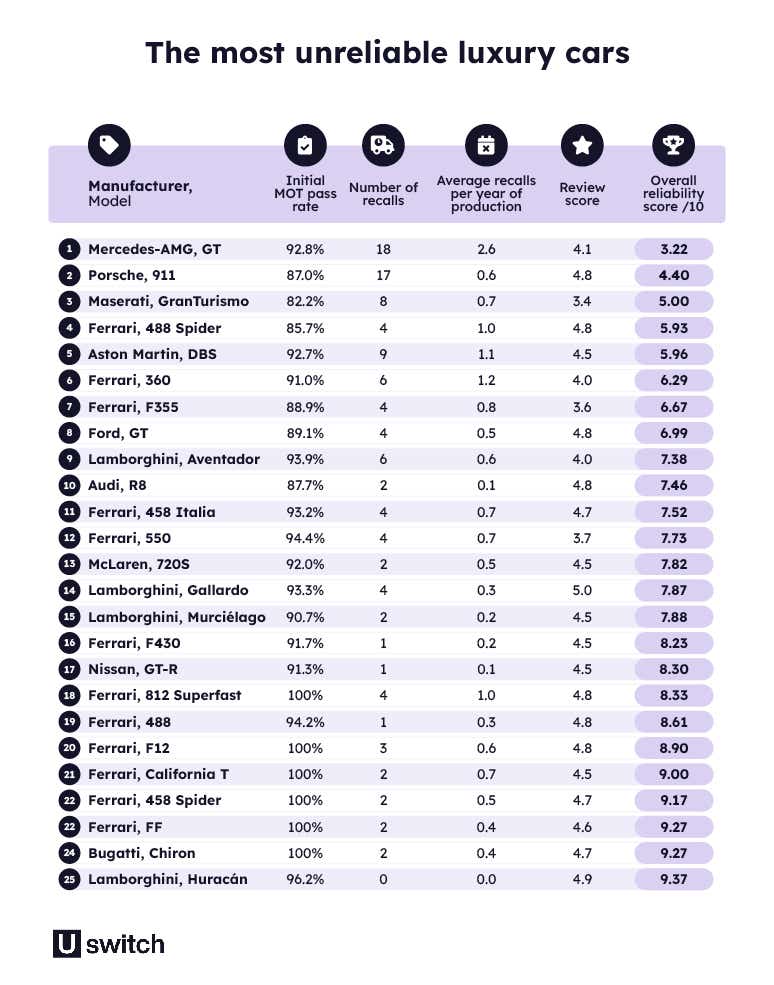 The worst supercar for…

The MOT test is a vital way of testing the roadworthiness and safety of a vehicle and of the supercars that we looked at, it was the Maserati GranTurismo that had the lowest rate of first-time passes, with just 82.2% passing their initial test.

Cars can be recalled when there’s a serious safety problem and you wouldn’t necessarily expect them to happen to supercars. As well as being the most unreliable car on our list overall, the Mercedes-AMG GT had the most recalls, with 18. Even when we take into account the number of years the car has been in production (7) then the GT still has 2.6 recalls per year.

Reviews: Maserati GranTurismo (3.4 out of 5)

While you would expect supercars to all have near-perfect reviews, that’s not always the case, as shown by the Maserati GranTurismo, which holds a score out of 3.4 out of 5 on Parkers. While by no means an awful score, it’s the lowest on our list.

“For petrol heads around the world, the peak in their life and career is when they can afford a supercar. However, after years of saving for their dream car, the last thing they want is it to be unreliable.

“Three different manufacturers appear in the top 3 most unreliable supercars, the Mercedes-AMG GT ranks as the least reliable, followed by the Porsche 911 and the Maserati GranTurismo respectively.

“The Maserati GranTurismo also had the lowest rate of first-time MOT passes, with just 82.2% passing their initial test, meaning the car can start costing a lot of money just three years in!

“The Mercedes-AMG GT was the most unreliable car on our list and also had the most recalls, with 18 recalls. Porsche followed closely behind with 2 models having the second, and third highest number of recalls, with the Porsche 911 (17 recalls) and Porsche Panamera (15 recalls).

We rated each supercar on the following three factors, giving each vehicle a normalised score out of ten for each factor, before taking an average across all three scores.

The percentage of vehicles that passed their MOT first time in 2020, according to data acquired via a Freedom of Information request made to the Driver & Vehicle Licensing Agency.

We also looked at the number of years that each car has been in production (since 1992) to calculate the average number of recalls per year.

The review score out of five given to the most recent version of the vehicle on Parkers.