Looking to cut your energy bills, make money and create a sustainable way to generate energy? Read on to find out why microgeneration might be a great option for you.

With energy prices rapidly increasing more and more people are looking at microgeneration as a way to cut bills and be environmentally friendly. The technology behind microgeneration is also getting cheaper and more efficient.

So is now the time to begin generating your own energy? How much money could you stand to save? And how can you get started with microgeneration?

What is energy microgeneration?

Microgeneration refers to the small-scale generation of energy by households, small businesses and communities. So anyone who installs solar panels on their roof or a domestic wind turbine on their property is involved in microgeneration.

Different people are attracted to microgeneration for different reasons. Some want to be more environmentally friendly and others simply want to save money and reduce their reliance on the National Grid.

Microgeneration is typically a ‘green’ process and energy is generated as a result of harvesting renewable resources such as the sun, wind and water flow. So regardless of which method you use, you are reducing the need for energy generated using highly polluting fossil fuels such as oil and coal.

In addition, although installing solar panels or a wind turbine can prove a costly investment, some people not only recoup their initial outlay but also turn a profit thanks to the Feed-in Tariff (now closed to new applicants).

Can I make money through microgeneration?

One of the main draws of microgeneration is the ability to make money by generating your own energy. However, it's now too late unless you're already set up to do so. 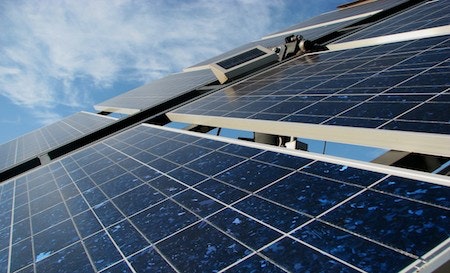 The Feed-In Tariff (FIT) scheme was introduced in April 2010 as a replacement for the previous system which relied on government grants. Those eligible for the scheme are paid for electricity they generate, regardless of whether they use it themselves or send it to the grid.

New applications for the Feed-In Tariff scheme closed on 31 March 2019, but those who already receive payments under the scheme will continue to do so.

What are the different technologies used for microgeneration?

There are quite a few options for anyone looking to generate their own power, although not all might be suitable for your needs or situation. You should also bear in mind that the amount of energy produced varies greatly depending on your situation. For example, a roaring river will produce more than a trickling stream!

This technology requires a source of running water such as a river or stream which flows all year long. It generates power by turning the energy from the running water into a form of power we can use in our homes.

Similar in structure to the huge turbines you might have seen in wind farms, small wind turbines are usually between two and eight metres high. The amount of electricity they produce varies on their size and the strength of the wind. Planning permission may be required prior to installation.

Solar photovoltaic (PV) converts the sun’s energy into electricity which can be used to power households. Don’t worry about the panels not working in the UK as they’re able to create energy from daylight and don’t require a sunny day – although the more sunlight, the more electricity is produced.

If you are interested in finding out more about solar panels check out our wide-ranging collection of solar panel guides.

This technology relies on a natural process in which plant and animal materials are broken down by mico-organisms within an air-tight container or ‘digester’. As the micro-organisms digest the organic matter they release biogas, which can be used to generate heat and power.

Are there any green energy plans out there?

If you want to make sure as much of your energy is possible is generated in a sustainable way, you might be interested in our guide to green energy plans. Here we list the green plans currently available on the market and help you choose one that suits your conscience and your pocket.