If you’re still mourning the death of Samsung’s Galaxy Note series, mourn no more. Although part of the Galaxy S lineup, the flagship Samsung Galaxy S22 Ultra is, in all but name, the Note sequel we never got last year.

The handset inherits some of the standout features from the Note series, such as an S Pen you can store inside the phone, a giant screen and a more sophisticated camera. By merging the two, Samsung has a truly versatile flagship on its hands with the Galaxy S22 Ultra. 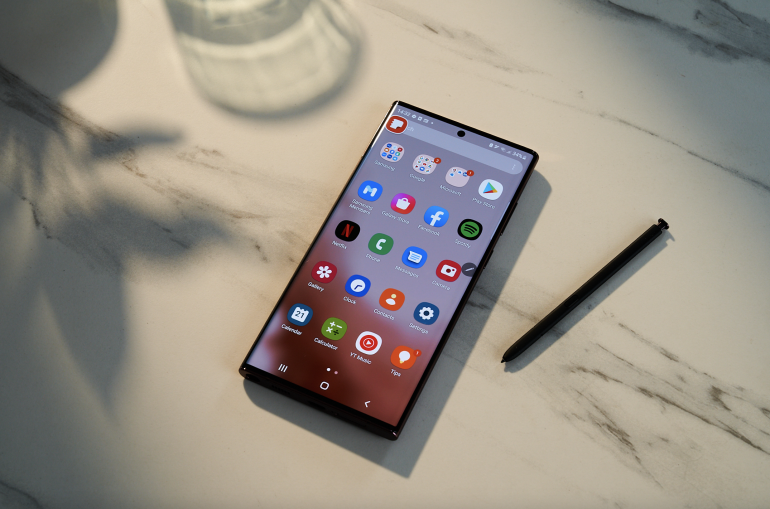 First things first: the Galaxy S22 Ultra is a huge device. It’s by far the biggest handset in the Galaxy S22 lineup, with a large 6.8in display that curves around the left and right edges with a flat top and bottom, much like the Galaxy Note 20. This means the handset measures in at 163 x 78 x 8.9mm and tips the scales at a hefty 229g. So it’s by no means the most pocketable of smartphones.

That’s not to say it’s not a good looking device. The Samsung Galaxy S22 Ultra oozes high-end with its frosted, glass-topped rear and reflective metal sides. It’s also available in a range of eye-catching colours; we tested the ‘burgundy’ model (which is more of a deep purple hue), but the handset is also available in phantom black, phantom white, green, graphite, sky blue and red.

Thankfully, unlike the Note 20 Ultra, there’s no obtrusive camera block on the rear of the handset. Instead, you’ll find a selection of lenses nestled in the upper left corner. This means the phone manages to sit flush when placed on a table and makes it less awkward to hold.

It’s plenty durable, too. Like the rest of Samsung’s Galaxy S22 lineup, the top-end model is fully IP68-certified against dust and water. It’s also the first smartphone to benefit from Corning Gorilla Glass Victus Plus, which is a new protective layer that’s been applied to both the front and rear of the handset. According to Samsung, this is 12.5% tougher than the Gorilla Glass found on last year’s model, which means it should be less prone to scratching.

Our favourite design feature on the S22 Ultra is the built-in S Pen stylus, which you’ll find located in the bottom left corner of the handset. You simply push it inwards to release it from the chassis, and then you can use it for on-screen note-making, doodling, and as a remote camera shutter button.

The S Pen has seen a number of improvements from the stylus that shipped with the Galaxy Note 10, including reduced writing latency (from 9ms to 2.8ms) which makes it feel much more responsive when making notes. There’s also a new AI-based coordinate prediction technology that anticipates the direction you’ll draw, which seemed to work well during our time with the Galaxy S22 Ultra.

Another feature that won us over on the Galaxy S22 Ultra is its near bezel-free 6.8-inch Dynamic AMOLED QHD+ display, interrupted only by a tiny punch-hole cutout at the top. The screen, which curves around the edges of the handset, boasts a dynamic 120Hz refresh rate, which means it’s impressively slick and smooth while scrolling. It also has a 240Hz touch sampling rate that makes it an excellent device for gaming.

Not only is it slick, but the screen on the Galaxy S22 Ultra is also impressively vibrant and punchy. It has a peak brightness level of 1,750 nits, which is the highest we’ve seen on an Android smartphone. And it has a neat feature that dynamically adjusts the brightness of the screen when it’s being used in direct sunlight.

You’ll also find a fingerprint sensor baked into the screen, which we found easy to set up and nippy to use. And, of course, it has Face Unlock technology facilitated by the front-facing camera. 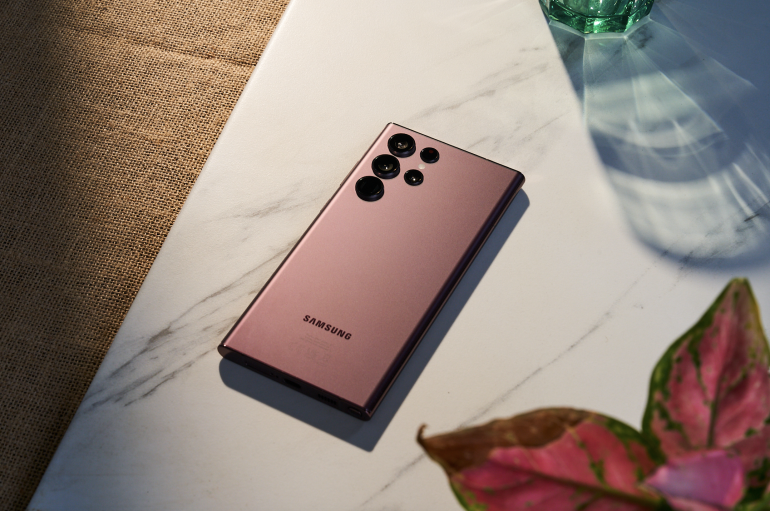 On paper, the Samsung Galaxy S22 Ultra is one of the most impressive cameraphones we’ve tested thanks to its 108MP main lens, 12MP 120-degree ultrawide, dual telephoto lenses offering 3x and 10x optical zoom on the rear, and a 40MP selfie camera around the front.

Unsurprisingly, the 108MP main camera is the most impressive, with its all-new sensor capable of capturing images at full resolution. It then combines the data into a sharper, more detail-rich image through a process called “nona-binning”. The results are brilliant, with the Galaxy S22 Ultra producing rich, detailed images, even when lighting isn’t at its best. 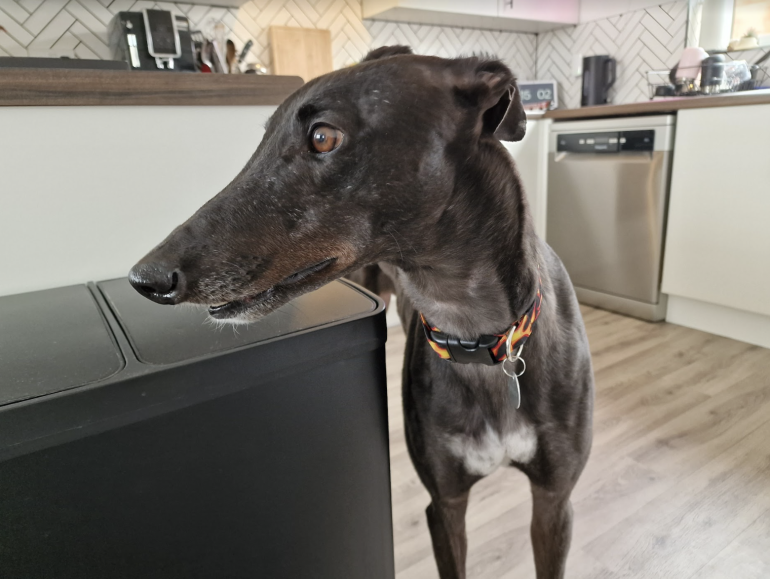 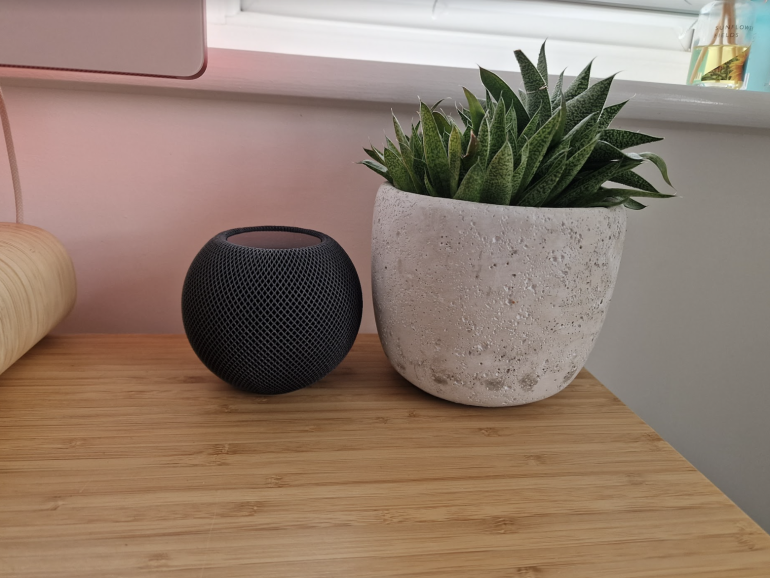 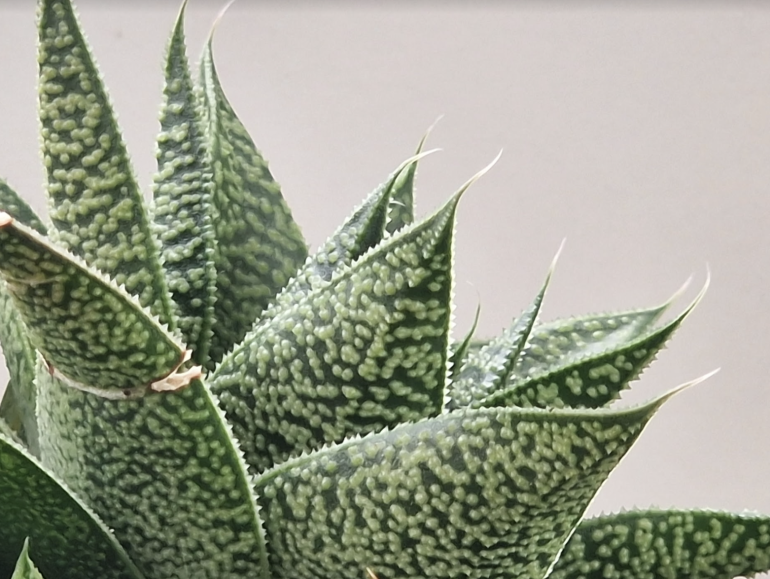 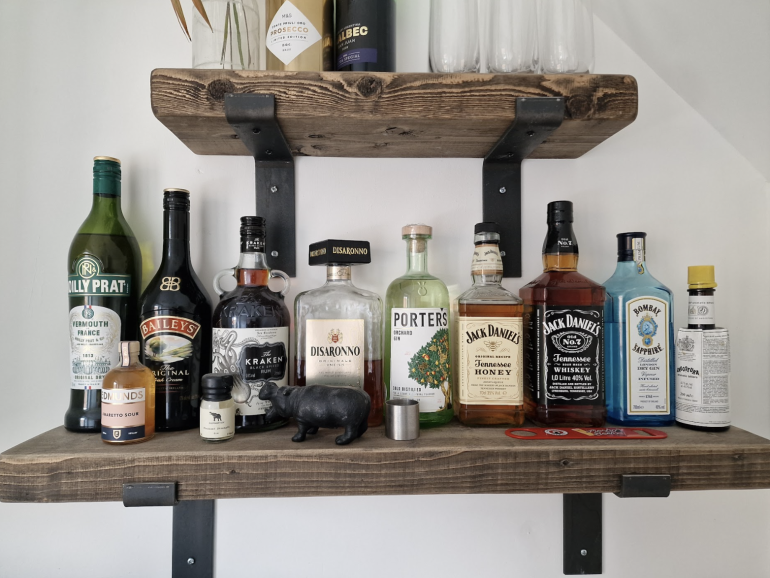 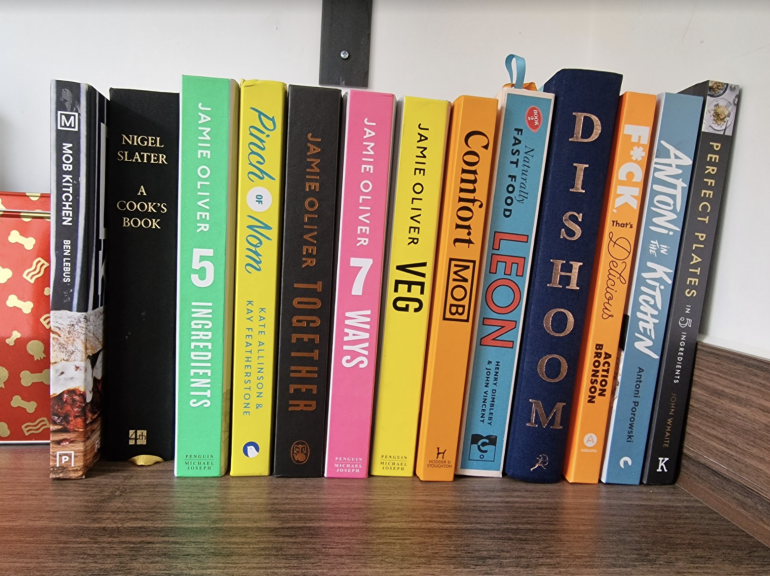 We were also impressed by the camera’s optical zoom capabilities, which managed to capture detailed images with barely-there noise. This is likely thanks to the phone’s neural processing unit (NPU) that now does a better job at sharpening details and reducing visual noise in low-light conditions. However, while the handset’s zoom capabilities are impressive, they’re not quite on par with the Google Pixel 6 Pro.

Portrait Mode, too, has been vastly improved on the Galaxy S22 Ultra, with Samsung boasting that the phone can recognise individual strands of hair and separate them from the blurry background. 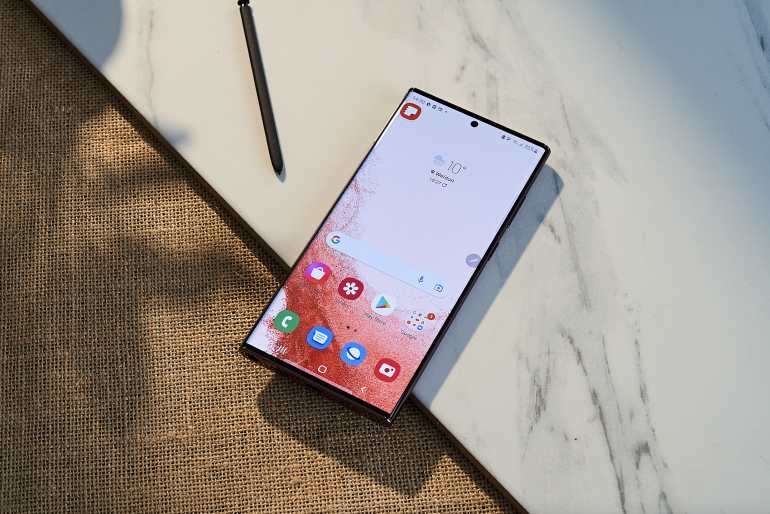 Here in the UK, the Galaxy S22 Ultra is powered by Samsung’s own Exynos 2200 SoC, as opposed to the Qualcomm Snapdragon 8 Gen 1 chip that ships in US-bound models. Both are built using a 4nm fabrication process and, according to Samsung, are “the most powerful processors ever on a Galaxy device”.

While many will be disappointed at the lack of a Qualcomm processor, Samsung’s Exynos 2200 is an impressive piece of kit. Thanks to a partnership with AMD, it’s the first mobile chip to ship with RDNA 2 graphics technology, which Samsung has dubbed ‘Xclipse’. It’s also the first to support hardware-accelerated ray tracing. This makes the Galaxy S22 Ultra a great device for gamers, proving realistic in-game graphics and unmatched visuals.

The Exynos 2200 doesn’t just impress in terms of graphics performance, as it’s also one of the - if not the - fastest mobile processor we’ve tested. In Geekbench 5, the Galaxy Note 22 Ultra racked up a single-core score of 877, and a multi-core score of 3,199. On paper, this makes it faster than last year’s Galaxy S21 Ultra 5G and the Galaxy Note 20 Ultra 5G, and it also beats out the likes of the Google Pixel 6 Pro and the Huawei P40 Pro.

Elsewhere, the Galaxy S22 Ultra comes in four variants. The cheapest model ships with 8GB RAM and 128GB storage, and there are also 12GB/256GB, 12GB/512GB and 12GB/1TB variants available. It’s worth noting that there’s no built-in microSD slot on the handset, so be sure to choose a model with enough storage.

In terms of software, the handset runs Samsung's OneUI 4.1 software, which sits on top of Android 12. As is typical with Samsung smartphones, we were overwhelmed by the number of apps that came pre-installed on the Galaxy S22 Ultra (Samsung ships its own versions of its Messages app and Calendar app alongside pre-installed Google variants). But we found the user interface slick and intuitive, and one of the cleanest iterations of Samsung’s own skin we’ve used.

There are a number of handy added extras, too. Samsung’s built-in photo editing tools, for example, let you remove objects and reflections for images. Meanwhile, DeX support lets you plug the smartphone into a monitor to transform it into a secure, desktop PC. There are also a number of features built with the S-Pen in mind, such as the ability to annotate screenshots and to quickly launch the built-in note-making app.

The Samsung Galaxy S22 Ultra packs the same 5,000mAh battery as its predecessor, so it should come as no surprise that battery life is comparable with last year’s flagship, albeit not quite as impressive. In our tests, the Galaxy S22 Ultra managed to provide around 11 hours of video playback, and in less intensive tests, we found it easily lasted an entire day of use.

The Galaxy S22 Ultra does charge faster than its predecessor, with Samsung increasing this from 25W to 45W when charged via USB-C. However, as with most Samsung phones, there isn’t a 45W charger included in the box. 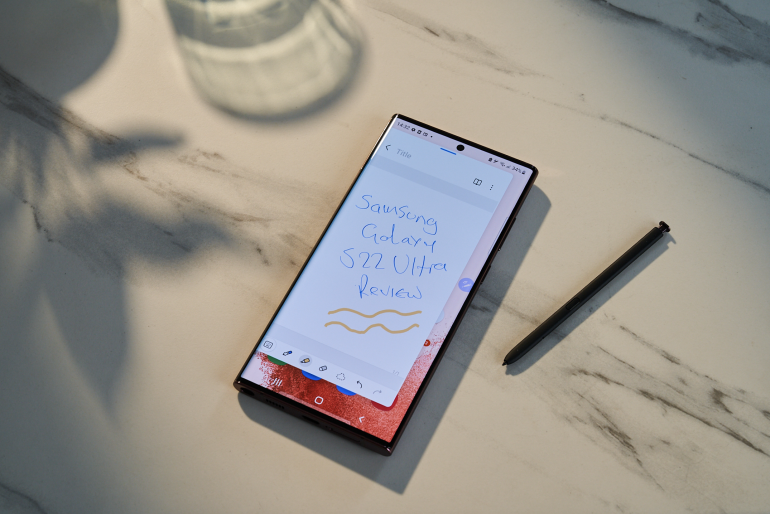 The Samsung Galaxy S22 Ultra is, undoubtedly, an excellent, ultra-premium Android flagship. It excels in every area you’d expect, from design and display to performance and photography. There’s also the added bonus of a built-in S Pen, which is sure to win over fans of the now-defunct Galaxy Note lineup.

However, there’s one major sticking point - and that’s the price. With pricing starting at £1,149 in the UK and climbing up to £1,499, the Galaxy S22 Ultra is one of the most expensive smartphones on the market today, and there are many more affordable alternatives available, from the Pixel 6 Pro to the OnePlus 9 Pro.

Saying that, if you’re in the market for an ultra-premium flagship and don’t care how much it costs, the Samsung Galaxy S22 Ultra is the smartphone for you.

If you're looking for an Android phone but not sure if the Galaxy S22 Ultra is for you, check out Uswitch's best Android smartphones of 2022 guide. Or compare how the S22 stacks up against the best mobile phones on the market.