Carly Page - 04 October 2021 Last updated: 26 July 2022
Comment
Share
Tweet
Want to know which is better, the iPhone 13 or iPhone 13 Pro? Here's how Apple's two top-tier smartphones stack up against each other and which iPhone is best.

The iPhone 13 series features four different models, the iPhone 13, iPhone 13 Pro, iPhone 13 Mini and iPhone 13 Pro Max. While this means there’s plenty of choice for those eyeing up a new Apple smartphone, it can also make it difficult to pick which is the right model for you.

This is particularly true if you’re debating whether to get the iPhone 13 or iPhone 13 Pro, two phones that, on the face of it, look largely similar. Both feature 6.1-inch Super Retina XDR OLED displays, pack Apple’s latest and greatest A15 Bionic chip, and sport boxy flat designs reminiscent of the iPhone 4 and last year’s iPhone 12 series. However, there are also a lot of differences between the two, with the latter boasting an additional camera, a beefier battery and, naturally, a heftier price tag; the iPhone 13 Pro is available in the UK from £949, while the iPhone 13 can be picked up from £779.

So which of the two handsets is right for you? We’ve pitted the iPhone 13 and iPhone 13 Pro head-to-head in order to find out. 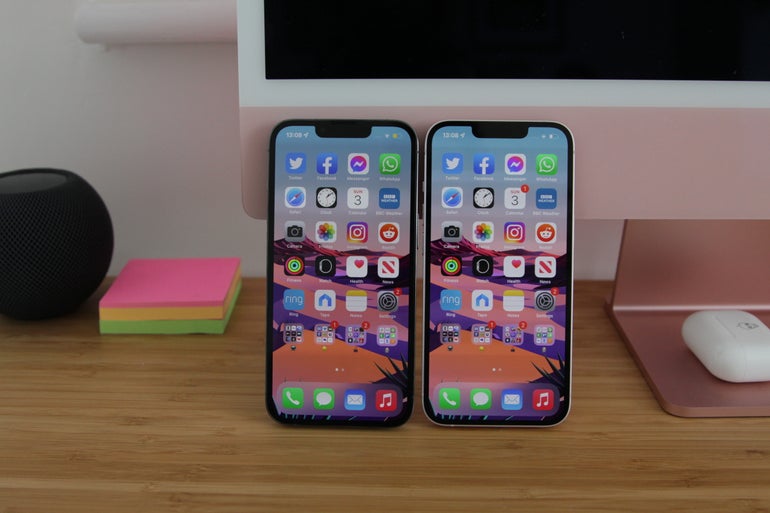 On first impressions, the iPhone 13 and iPhone 13 Pro are near-identical from a design perspective. From the front, both devices sport a slightly downsized notch (it’s 20% smaller than the cutout on the iPhone 12 series) and bezel-free 6.1-inch screen, and both sport a boxy design similar to last year’s iPhone 12 complete with flat metal edges and a colour-matched camera bump. While often a feature reserved for top-end handsets only, both devices also boast IP68 certification against dust and water.

Colour options could be another deciding factor for many in choosing between the iPhone 13 and iPhone 13 Pro. The former is available in Starlight, Midnight, blue, pink, and (PRODUCT)Red, while iPhone 13 Pro comes in silver, graphite, gold, and Sierra Blue.

In terms of display, both the iPhone 13 and 13 Pro have 6.1-inch Super Retina XDR OLED displays that deliver crisp visuals, punchy colours and impressive levels of brightness. The Pro, however, also features 120Hz ProMotion technology, which means animations are speedy, transitions are snappy, and scrolling is buttery smooth when navigating around iOS 15. To ensure battery life isn’t drained as a result, the iPhone 13 Pro features an adaptive refresh rate, which means the phone will automatically change the frame rate from 10 to 120Hz depending on what you're doing. If you're reading a news article, for example, it will drop the frame rate to preserve battery when the screen isn't moving but will ramp it back up when you start scrolling. 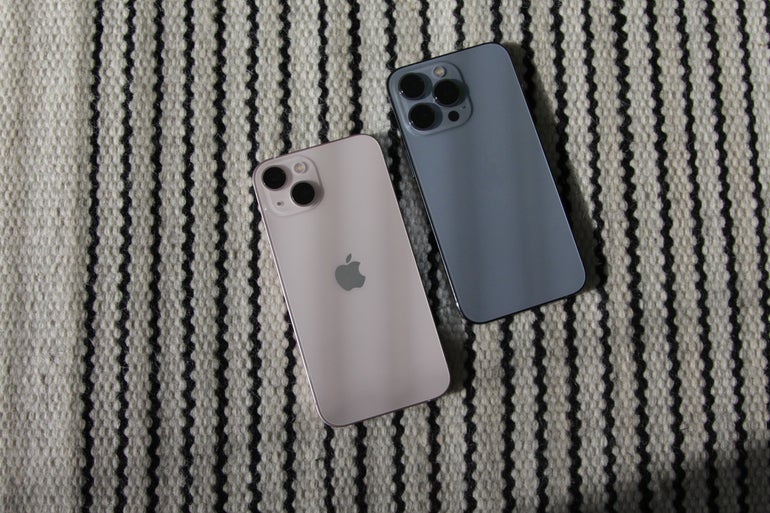 On paper, the iPhone 13 and iPhone 13 Pro are fairly evenly matched when it comes to performance. Both smartphones feature Apple’s new A15 Bionic processor, a 5nm chip that packs 15 billion transistors - up from the 11.8 billion transistors found on the A14 Bionic - which the company claims is its fastest yet. Performance on both iPhones was impressive, as you’d expect: neither phone showed any sign of slowing down no matter what we threw at it, from emails and video recording to graphically intensive games. However, it’s worth noting that the iPhone 13 has four GPU cores, while the iPhone 13 Pro has five.

The similarities in performance between the two devices was backed up by benchmarking scores. In Geekbench 5, the iPhone 13 scored 1,727 and 4,582 in single-core and multi-core tests, respectively, while the iPhone 13 Pro scored 1,738 and 4,596.

In terms of storage, the iPhone 13 is available with a choice of 128GB, 256GB or 512GB, while the iPhone 13 Pro is available in 128GB, 256GB, 512GB and 1TB configurations. Neither handset sports a built-in microSD slot, which means you’ll need to consider how much storage you need before you take the plunge. 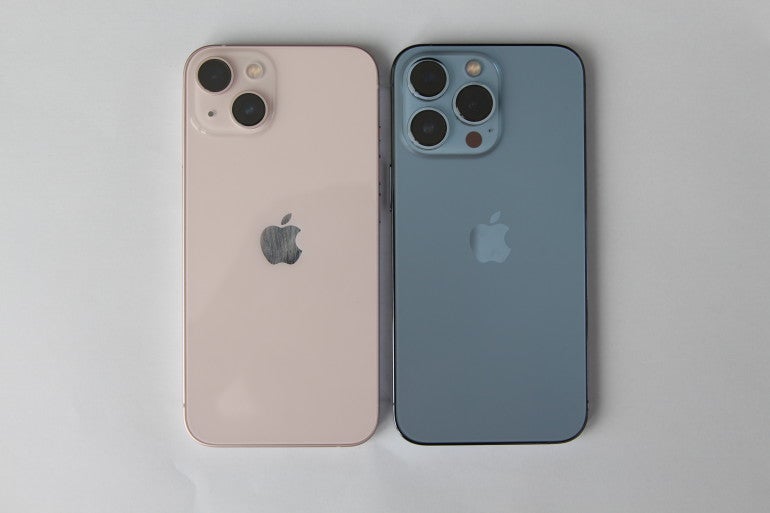 On paper, the iPhone 13 Pro is the top-dog when it comes to camera credentials, boasting a triple-lens camera setup comprising 12MP wide, ultra-wide and telephoto lenses, the latter adding 3x optical zoom. The standard iPhone 13, on the other hand, features only 12MP wide and ultra-wide lenses.

Adding to its on-paper win, the Pro-branded model also features a LiDAR Scanner in the rear camera array to accurately map environment and depth, is also able to digitally zoom in 10 times further than the iPhone 13, and is capable of shooting in Apple ProRaw recording video in 4K ProRes at 30 fps. However, while the iPhone 13 Pro provides a more capable, pro-oriented, and fully-featured camera experience, it’s worth noting that many of these features are aimed at professional photographers and videographers, which means that the vast majority of users will not make use features such as ProRAW, ProRes, and LiDAR, and will only really miss the third telephoto lens.

In terms of image quality, the iPhone 13 and iPhone 13 Pro are, once again, fairly evenly matched. We struggled to see a difference between images taken in bright, natural light, although thanks to the additional LiDAR Scanner, the iPhone 13 Pro produced slightly more impressive images at night. Overall, while the 12MP sensors sound middling compared to the 50MP lenses cropping up on Android flagships, the cameras on both iPhone 13 models remain among the best on the market.

In terms of video performance, both the iPhone 13 and iPhone 13 Pro can capture video at up to 4K and 60 frames per second, and both feature Apple’s much-hyped new “Cinematic” mode for capturing videos with smart near-instant autofocus between different subjects, as well as more dramatic depth-of-field effects.

The iPhone 13 and iPhone 13 Pro both ship in impressively compact boxes, although this does mean you won’t find many accessories inside. In both, you’ll find a USB Type-C to Lightning cable, a Sim ejector tool and Apple sticker - there’s no power adapter, no headphones and no Lightning-to-headphone jack adapter.

Are the iPhone 13 and iPhone 13 Pro good for people with sight loss?

The iPhone 13 and iPhone 13 Pro will provide sharp, clear images. That said, the Pro has an extra 200 nits, meaning it can get brighter than the 13. This small advantage is helpful in bright sunlight.

A screen reader is available for those with low or no vision. You can also do things like magnify elements of the screen, use multiple methods of colour inversion, and adjust text size. The latter option only works on phone menus and certain apps though.

Are the iPhone 13 and iPhone 13 Pro good for people with physical disabilities?

The biggest difference between the iPhone 13 and the 13 Pro is the weight. The Pro is 204g and holding it might feel too heavy.

If you have less hand or arm strength, the 174g iPhone 13 will feel easier to manage.

It’s possible to use the phones one-handed, but there will be tasks that need a supporting table.

Reachability mode shifts on-screen activity down, to make it easier for you to navigate one-handed. This is undermined by the fact that the mode resets when new apps are opened.

Are the iPhone 13 and iPhone 13 Pro good for people with hearing loss?

The iPhone 13 range is suitable for those with hearing loss. Hearing Aid support is available. And the iPhone speakers will provide loud and relatively clear sound.

Some of the sharpness is lost when the volume is turned up to the max. However, you will still be able to hear the important details, even if there is some noise around you.

iPhone software will let you set the balance between your left and your right ear, turn on Mono Audio, and customise subtitles to a limited extent.

Although, on first impressions, the iPhone 13 and iPhone 13 Pro look almost identical, there are some differences between the two that should help you decide which one is best for you. If you’re after a phone that feels premium, boasts a professional camera experience and a best-in-class display, the iPhone 13 Pro would be the sensible choice; it’s stainless steel chassis feels high-end and expensive, its endless camera features are sure to impress budding photographers and videographers, and its new ProMotion display is an upgrade-worthy addition.

While it lacks a 120Hz refresh rate and features a less premium aluminum chassis, the iPhone 13 remains a capable device. It’s near on-par with its Pro sibling when it comes to performance and its camera is among the best on the market, so if you’re not fussed about having all of the additional bells and whistles, the iPhone 13 is a sensible choice - particularly when you consider it's almost £200 cheaper.