Despite solar panels growing in popularity, there remain some common myths around the renewable energy source

Solar panels are the up-and-coming feature of any energy-saving household thanks to a growth in coverage, improved efficiency and decreased cost.

Despite these changes, there remain some common misconceptions around solar panels that prevent many households giving them any thought. So, how much do solar panels cost and how much energy do they produce?

Before we start myth-busting though, why should you even consider solar panels in the first place? Quite simply solar panels are one of the most cost-efficient ways to generate your own domestic energy, and thanks to their carbon-neutral status they are eligible for grants and financial support.

The Feed-in tariff scheme (see below) means that not only can you save money by using the energy your produce – and not using power from the national grid – but you can get paid for generating that money too and, should you produce an excess, you can be paid for selling it.

Solar panels have a reputation as an expensive luxury, rather than a financially viable solution to a home’s energy needs. This is partly due to their history.

And, for a long time, solar panels were very expensive. Up until the last few decades, the closest any of us would get to them was by watching science fiction films.

However, in recent years, the cost of installing solar panels has gone down significantly. At the same time, their efficiency improved.

Additionally, thanks to the government’s Feed-in Tariff scheme, you can now earn money with them too.

How the Feed-In Tariff works:

So, how expensive is it? It can be tricky to put an exact figure on how much solar panels cost as so much depends not only on where you get your panels, but how you choose to pay for them.

A typical 3kW system consisting of 12 panels will cost between £6,500 and £9,000. Alternatively, you can get it installed for free through a ‘rent a roof’ scheme.

However, if you pay for your panels at the outset, you will earn money from your panels thanks to the Feed-in Tariff scheme — in addition to saving money due to lower energy bills.

At current FiT rates, you could pay for your panels in just 10 years, or even get them installed for free. As a result of these measures, solar panels cost much less than before.

Myth 2: "Solar panels need the sun, and there’s never any sun in the UK!"

Probably the most common misconception around solar panels is that they only work in direct sunlight and, since the UK isn’t exactly renowned for its sunshine, they are not much use here.

This is simply not true. While solar panels are more effective in sunnier weather – up to 50% more than in cloudy weather – your solar panels will still generate substantial amounts of energy when the clouds are out.

Crucially, as most solar panel systems are installed as supplementary to your existing on-grid power supply, a few clouds doesn’t mean your home will be cut off.

If you need any more convincing, just consider the fact that the world’s leading solar power producer is Germany, a country with a fairly comparable climate to the UK.

Myth 3: "Why pay for solar panels when you can get them for free?"

This one isn’t exactly a myth, because some homes may be eligible for ‘rent-a-roof’ schemes whereby the solar company will install panels on your property for free, as well as paying any maintenance costs.

What’s more, you get to use the energy they generate, so you could still reduce your bills. With that kind of offer, only a fool would pay for their own panels, right?

But the idea that everyone should go the route of rent-a-roof is what’s wrong here. 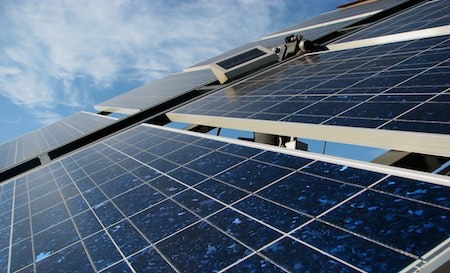 Whilst free solar can be a great option for some people, installing your own panels is more likely to be profitable in the long run.

A solar company offering to install free solar is banking on the fact that your roof will not only pay for their installation costs, but also continue to earn them a profit long thereafter.

The rate you receive for your panels will depend on when you have your panels installed and also the energy-efficiency rating of your home, so you need to do your research first.

But, depending on your Feed-in Tariff rate, you could pay for you panels within 10 years. Then they become your steady earner, rather than the solar installer’s.

Myth 4: "If you’re getting paid for solar from your energy company it means you can’t switch"

Another common myth related to the fact that your Feed-in Tariff — the rate you get paid for the energy you generate — is linked to your energy supplier.

This rate, and the solar panels themselves, are yours. That means you can switch energy companies as many times as you like to make sure you’re getting the best deal on your energy.

The actual rate you receive for energy you generate is fixed, however.

Myth 5: "Solar power is too new, it’s better to wait until it improves"

Another common but outdated assumption around solar power is that it is new technology and, like flat screen televisions or smartphones, it is better to wait a bit until all the kinks have been worked out before taking the plunge.

In fact, the technology behind solar is more than 100 years old. However, while it is fair to say that solar power wasn’t viable for a long time, huge strides have been made in efficiency and in terms reducing solar panel's costs in the last few years — meaning there has never been a better time to invest in solar.