Taking 41 of the most-mentioned video games we reveal how long it takes the world to download them.
Share this guide 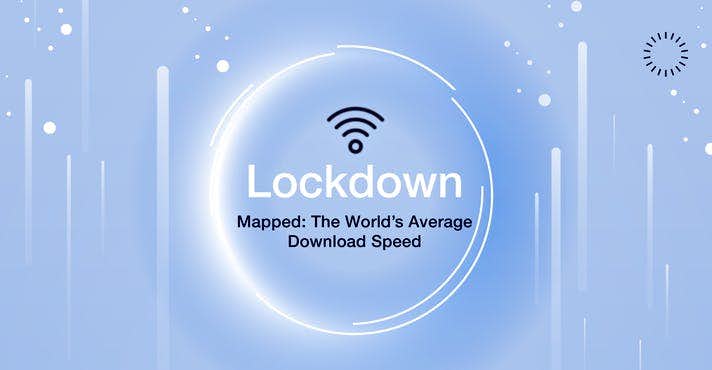 Where in the world can you download video games the quickest?

Depending on where you live, your internet download speed can make all the difference to your gaming experience.

Taking 41 of the most-mentioned video games across Reddit, IGN, Gamespot, Gamesradar, Giant Bomb and Metacritic we reveal how long it would take to download them, based on the average download speed in your country and video game file size.

The countries with the fastest internet revealed

Taiwan takes the top spot, with average download speeds of around 80Mbps, meaning that you could download Call of Duty: Modern Warfare (165GB) in around 4 hours and 42 minutes.

The UK came 34th out of 207 with the average download speed spluttering along at just 22.57Mbps. In the UK, downloading Call of Duty: Modern Warfare would take 16 hours 50 minutes - that’s 4 times longer to get hold of exactly the same content in Taiwan.

The average video game file size in our study was 53GB, so we found out how long it would take the ten fastest countries to download 53GB (similar in size to Call of Duty: Black Ops 3). 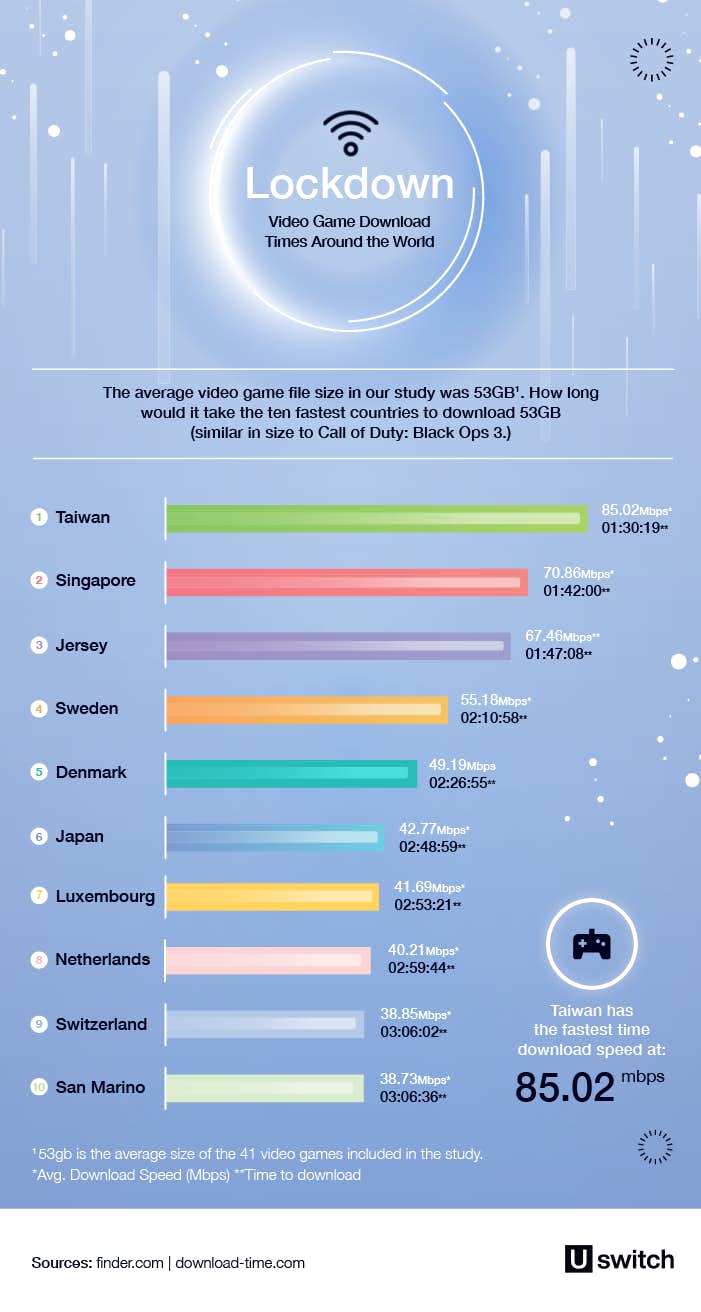 The study revealed that the average download speed around the world is just 11Mbps, but which continent is achieving the best speeds for gamers? And how much above or below the global average are they? 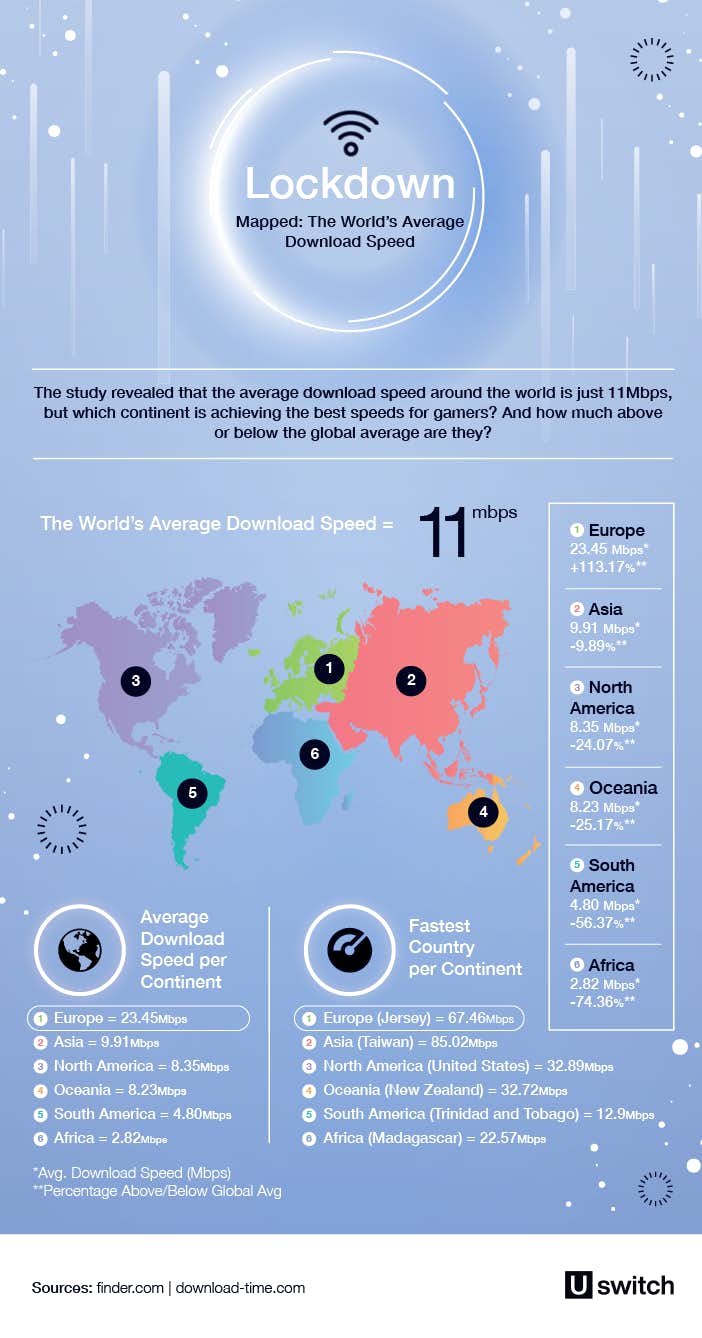 Under the microscope: the UK’s appetite for gaming

The average video game download tips the scales at a hefty 53GB, it is clear that many internet connections around the globe would struggle to download something of that size in less than 24 hours, including the UK.

The UK has the 6th largest appetite for gaming in the world according to 2019 data from Knoema, but we are 34th in the world when it comes to average download speed, showing that there is clearly room for improvement.

To solve this, the UK Government announced a Universal Service Obligation (USO) for broadband, defining a ‘decent’ connection as one that can deliver 10 megabits per second (Mbps) download speed and costs less than £45 per month.

Downloading the average video game (53GB) on a 10Mbps connection would take 11 hours 47 minutes to download; 87% slower than in Taiwan (85Mbps).

Will this USO be enough to keep the UK’s gamers happy?

As lockdown around the world continues, we wanted to find out how long it would take gamers to download the 5 hottest video game releases in April.

Taking the top 15 countries who spend the most on video games (according to Knoema) we found out how long it would take to download April’s top gaming releases, based on their individual download speeds.

Lockdown gaming options: The fastest and slowest games to download

Combining the download time data from all 207 countries in the study, here are the games that are taking the world the longest to download. On average, the new, remastered Call of Duty: Modern Warfare takes over 30 hours to download on average, followed by Uncharted 4 which takes 26 hours on average to download.

For quicker download times, look at The Sims 4, Predator: Hunting Grounds and Fortnite, where you can be up and running in around 2 hours, no matter what internet speed you have. 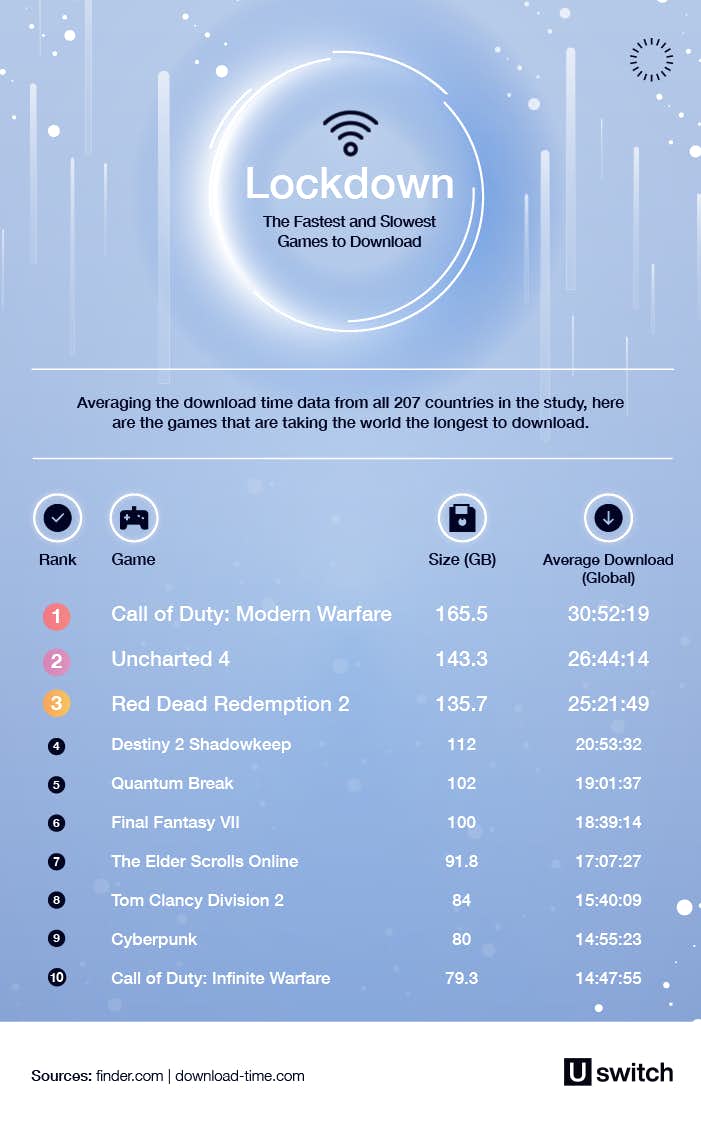 Whether you’re a fan of First-Person Shooters (FPS) or Role-Playing Games (RPG) we discovered which gaming genre has the longest and shortest average download time: 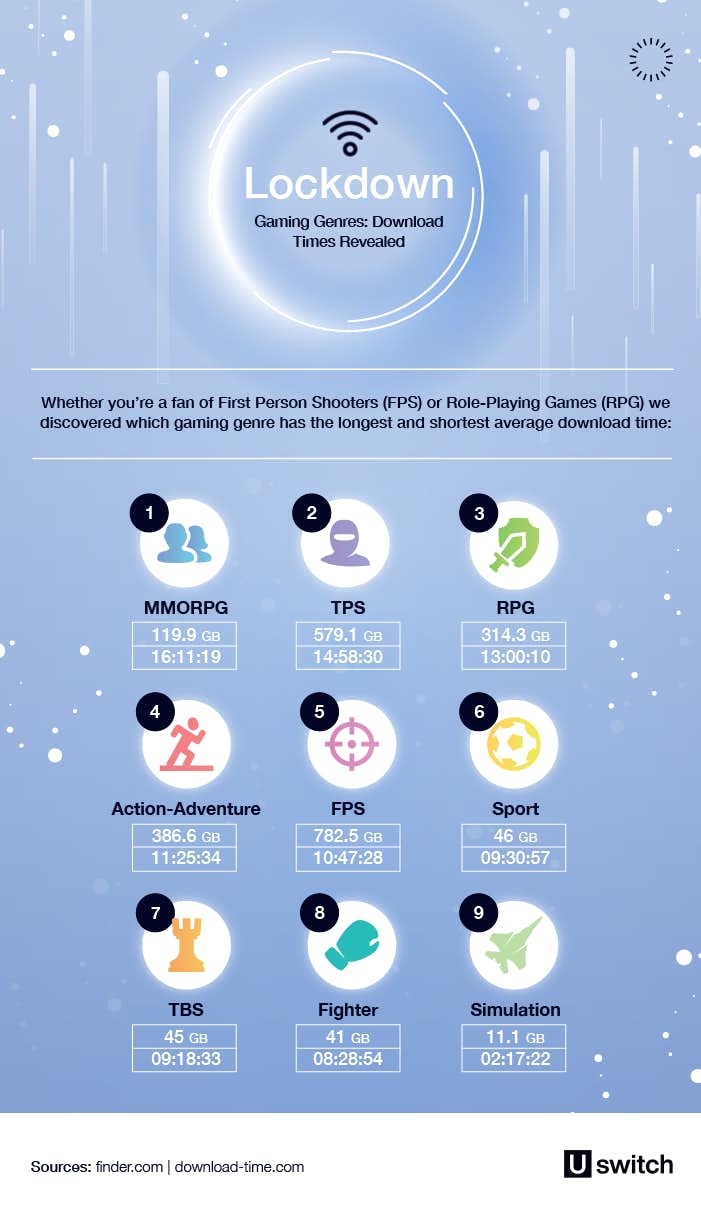 Massively Multiplayer Online Role-Playing Games (MMORPG) games topped the chart, taking an average of 16 hours to download, owing to their complexity and incredible graphics, whereas Fighter and Simulation style games were the quickest to get up and running.

Whether you’re a PS4, Xbox or PC gamer, there are a few differences in the length of time it takes to download the titles across these platforms. Games on the Xbox had slightly smaller file sizes when compared to PS4 and PC which meant they were marginally quicker to download.

Broadband expert Ernest Doku from Uswitch comments on the results of the study:

"The video game industry is estimated to be worth over £71.8bn ($90bn) by the end of 2020, with 80% of that revenue coming from software sales, including digital downloads.

"This is what makes it so interesting to compare download speeds around the world, given the ever-growing size of game files.

“With the average game download tipping the scales at a hefty 57GB, it was clear to see that many internet connections around the globe struggle to download something of that size in less than 24 hours, including the UK.

"But the UK is 34th in the world when it comes to download speeds, showing that there is clearly room for improvement.

“Every home in the UK has the legal right to request a decent and affordable broadband connection, which is why the Universal Service Obligation (USO) for Broadband was put in place in March 2020.

“The Government have defined a decent connection as one that can deliver 10 megabits per second (Mbps) download speed and a 1Mbps upload speed (along with other defined quality parameters), and Ofcom has defined affordable as a connection costing less than £45 per month - but will this be enough to keep up with the UK’s insatiable appetite for gaming?”

If you are unhappy with your current download speeds, test your broadband connection. And check out our latest broadband deals to find out if there are faster services at a cheaper price in your area.