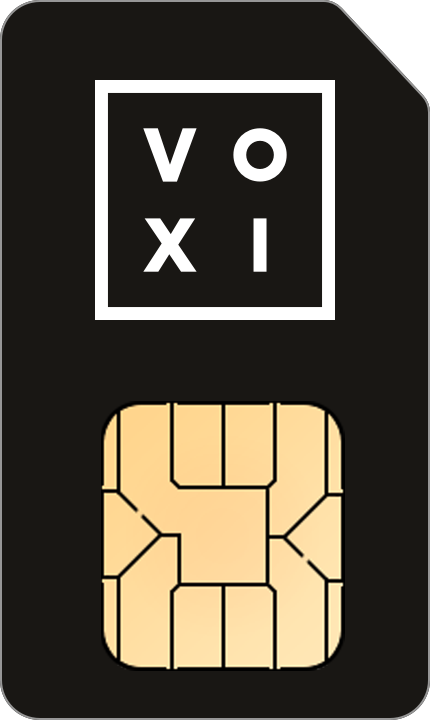 Use all your favourite messaging and social media apps, including Facebook, Instagram and WhatsApp without eating into any of your monthly data allowance.

Get a free gift when your friend joins

Recommend VOXI to one of your friends and you’ll both get a £40 Amazon voucher if they sign up.

VOXI’s SIM-only 30-day contracts give you the flexibility to switch plans quickly and easily. And you won’t need a credit check either.

Enjoy Unlimited data-free video streaming on VOXI's £15 and £20 monthly plans with some of the most popular apps, including Netflix, YouTube and Amazon Prime.

VOXI uses Vodafone’s mobile network, so is able to offer 98% 4G coverage throughout the UK on all its plans and 5G in a growing number of UK locations too.

Offered by VOXI’s service are in line with Vodafone. Vodafone’s network has an average connection speed of 21.6Mbps.

From June 2022, you can get a VOXI European Roaming Pass where you can use your inclusive plan data, or its 20GB fair usage data allowance (whatever is less). You'll also get unlimited calls and texts.

In countries outside of Europe, you can:

VOXI’s range of benefits include:

Unlimited Social Media: Less time looking for Wi-Fi, more time doing what you love on your favourite social apps. Snap, like and swipe away knowing it won’t come out of your data.

Unlimited Video: Stream as much video content as you want, without touching your data.

Unlimited Flexibility: Not happy with your plan? Want more data? No problem. Pause, change, or cancel your plan anytime on a 30-day rolling plan – even if you got a new phone as part of your plan.

Unlimited Calls & Texts: Not every way we connect with people relies on data. That’s why all VOXI customers get unlimited calls as standard on every contract.

VOXI doesn’t currently have a customer service phone line, but you can find help and support over on its customer service web page, or get in touch via the official VOXI Facebook and Twitter accounts.

VOXI doesn’t let you roll over your data. But you get unlimited data for social media, so you can post as many Instagram photos as you like, without ever worrying about eating into your data.

Presumably as another cost-cutting measure, VOXI doesn’t have a mobile app at the moment.

VOXI allows you to tether another mobile device or tablet to your phone, tablet or MiFi device but NOT to other devices such as your video game console, TV, or smart devices such as Chromecast or Fire TV Stick.

VOXI is a SIM-only network and does not operate an early-upgrade handset scheme.

Moving to VOXI and want to keep your phone number from another network?