Is parking on the pavement illegal?

Outside of London parking on the pavement is not usually illegal. But that doesn’t mean you’ll avoid a fine. Aside from the police, local councils can issue fines for pavement parking, so it makes sense to know the rules, which we shine a headlight on here.
Share this guide 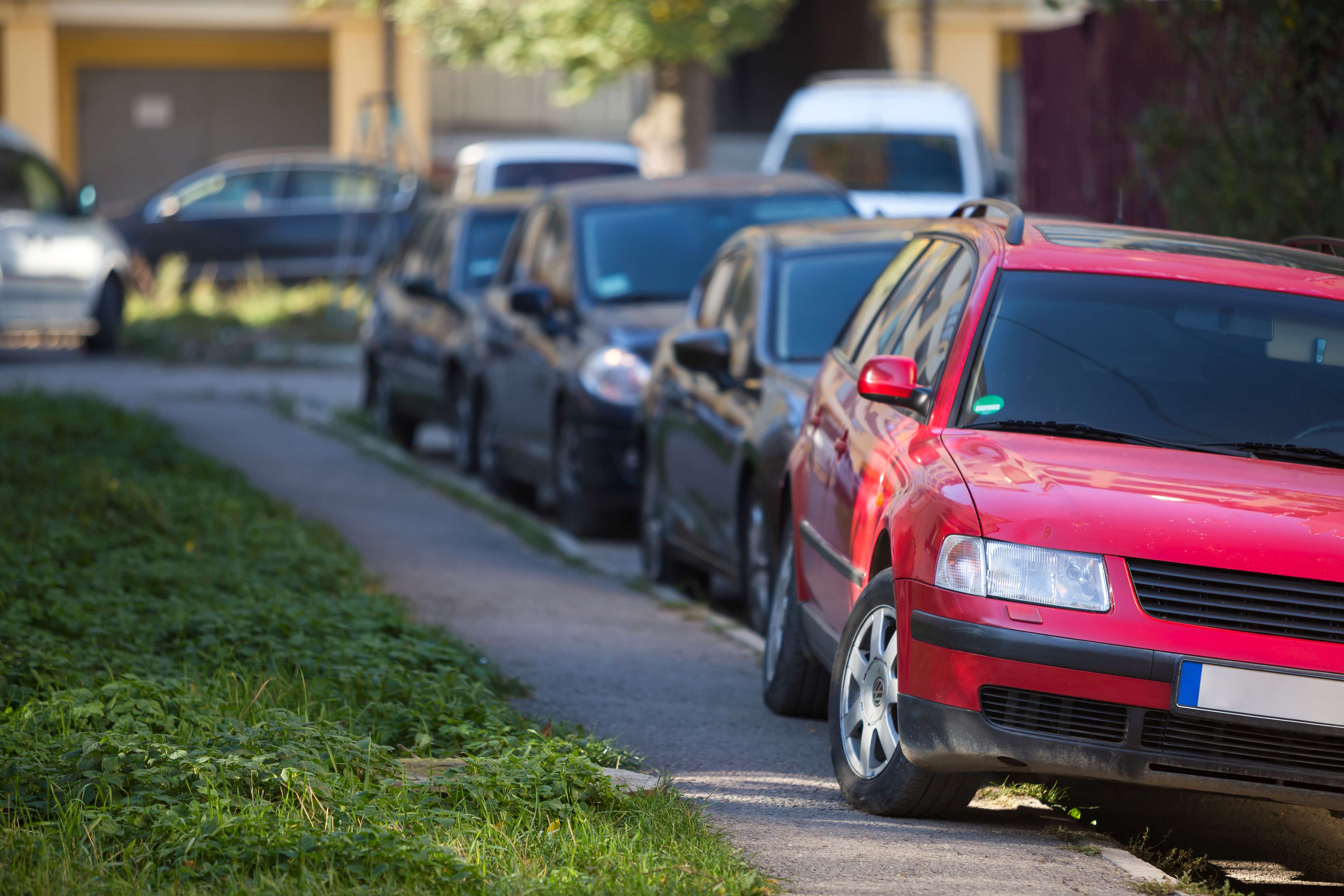 Is parking on the pavement illegal?

When is parking on the pavement illegal?

The Highway Code's rule 244 says: "You MUST NOT park partially or wholly on the pavement in London, and should not do so elsewhere unless signs permit it." This applies to all vehicles, including cars, vans and motorbikes.

There’s a big but, though. Some London councils have bylaws that mean you must park either with one set of wheels on the pavement or with your car entirely on the pavement. And the rules might be different from street to street or even along the same street.

You need to look out for the signs and street markings. Signs will indicate if wheels need be up the kerb. Dotted white lines will mark if the parking spaces are wholly on the road or pavement or partially on the pavement.

It could be illegal to:

Heavy good vehicles (over 7.5 tonnes) mustn't park on the pavement anywhere, except if essential for loading, when the vehicle must not left unattended.

Can I park on the pavement outside of London?

Although there is currently no ban on pavement parking outside of London, the drivers outside of the capital city are not off the hook. Councils can impose similar parking restrictions to those in London.

But the police can also issue a fine, and tow a vehicle away, thanks to several Highway Code rules. For example:

On this last point, ‘should’ rather than ‘must’ means it’s not a legal requirement and so not a police matter. Instead, it’s a matter for local authorities – the councils and their ticket inspectors.

What is a CPZ?

There are strict rules governing how councils can implement what are called Controlled Parking Zones (CPZ). These often restrict parking to permit holders, often local residents. If a local authority introduces parking restriction notices, drivers must abide by them.

A CPZ could mean parking on the pavement, either partially or fully, is illegal or compulsory. You need to lookout for the signs and road markings.

The rules on CPZs are set down in The Traffic Signs Regulations and General Directions 2016. Blue and red CPZ signs are placed at the start of a controlled area, a further sign indicates the end of the restriction, which can include loading as well as parking.

A council’s decision to restrict pavement parking will be guided by Rule 244 of the Highway Code: “Parking on the pavement can obstruct and seriously inconvenience pedestrians, people in wheelchairs or with visual impairments and people with prams or pushchairs.”

What damage does pavement parking cause?

The problem of pavement parking is not restricted to the physical obstruction of a public walkway, which could result in pedestrians needing to enter the road.

Chairman of the Transport Select Committee, Lillian Greenwood MP, recently said: “People are at risk of social isolation if they feel unable to leave their homes safely or are physically prevented from doing so.”

It is estimated local authorities spent £1bn on repairing kerbs, pavements and walkways between 2006 and 2010. Uneven pavements can cause particular problems for visually-impaired pedestrians.

Is there a total ban on parking on London pavements?

Some drivers in London and elsewhere believe parking wholly on the pavement is a valid way to avoid a parking ticket if the road has double yellow lines running along it. This is a myth, and it’s not the only one surrounding parking in the capital.

Despite the bold claim of Rule 244, you can sometimes park partially or wholly on pavements in London, if local council signage permit. This might sound confusing given what the Highway Code says, but it makes sense.

Some roads would be too congested for a fire engine or council refuse collection truck if all cars parked on the road. In these cases, parking is not just permitted on the pavement but is compulsory.

Why isn’t there a total ban on pavement parking in London?

London is a huge city, with around nine million people all rubbing shoulders within its 606 square miles.

The greatest concentration of residents and businesses is in the inner London area, which was built in Georgian, Victorian and Edwardian eras, long before modern cars, let alone 4x4s, filled the streets.

This, plus demand for converted flats and new-build apartment blocks, puts parking at a premium. The need for residential and business parking while ensuring roads are wide enough for traffic, especially the emergency services, explains why pavement parking exists.

There are, however, campaigns to ban all parking on the pavement.

How much can I get fined for parking on the pavement?

Police and council penalties differ, but if you find a yellow plastic envelope attached to your windscreen after parking on the curb, you can expect one of the following:

Both Fixed Penalty Notices and Penalty Charge Notices can be paid online or by post, payment details are included on the back of the ticket, within 28 days. Fines are usually halved if you pay within 14 days, or 21 days if the ticket was issued by post.

Payment can be made online or by post, according to instructions on the back of the ticket.

How much to local councils make from parking fines?

Authorities across England alone made £454 million from parking infringement in 2019, according to the RAC Foundation. It’s a huge sum, but it would be flippant to just say that parking fines are big business for cash-strapped councils.

Pavement parking can cause serious problems for some pedestrians, according to guidedogs.org.uk [Link: https://www.guidedogs.org.uk/how-you-can-help/campaigning/our-current-campaigns/streets-ahead].

For example, guide dogs are trained to stop if they detect a hazard, such as a pavement-parked car. It would then be for the visually-impaired pedestrian to figure out what the problem is, because the dog can’t tell them. This might lead them both to enter the road.

Can I appeal a fine for parking on the pavement?

You can appeal any Penalty Charge Notice. Court tribunal figures show that in the year to March 2018 just 9,566 of the 4.6 million local authority parking tickets issued in England and Wales were challenged, with 56% being revoked. It’s food for thought if you feel you have been unfairly penalised.

The appeals process differs depending on whether it was issued by the police or a local council.

What grounds of appeal can I lodge for pavement parking?

Ignorance of the rules around pavement parking is not a recommended excuse, but it may be possible to argue the case for a penalty being rescinded in some circumstances. These could include:

Will parking on pavement fines affect my insurance premium?

If you get a parking ticket, either from the police or local council it will not affect your car insurance including temporary, or multi-car cover, unless you left your car in a dangerous position and incurred points on your licence.

Is pavement parking banned elsewhere in the UK?

It is currently lawful to park partially or wholly on pavements in Northern Ireland, Scotland and Wales, although this is set to change in some instances.

Here is a brief rundown on the rules and proposals in the various UK nations.

Could pavement parking be banned in England?

London’s extensive ban on pavement parking may be extended to the rest of England if the findings of a House of Commons Transport Select Committee report on the issue gets the green light.

Transport minister Grant Shapps launched a consultation into the issue in March 2020, and appears to be sympathetic to the committee’s main drive. He said: “Vehicles parked on the pavement can cause very real difficulties for many pedestrians.”

Is there still an argument for pavement parking in England?

Whilst acknowledging the problem of dangerous parking, and obstructing pavements, the Royal Society for the Prevention of Accidents (RoSPA) is less sure about the merits of a nationwide ban.

RoSPA pointed out that parking on narrow streets could make it “impossible for emergency service vehicles, or grit lorries in bad weather” to pass, and supports a case by case approach to implementing restrictions on English roads.