The fastest charging electric sports cars on the market

With electric sports cars becoming increasingly popular, Uswitch was keen to find out which electric cars were the fastest charging, and which had the highest speeds.
Share this guide 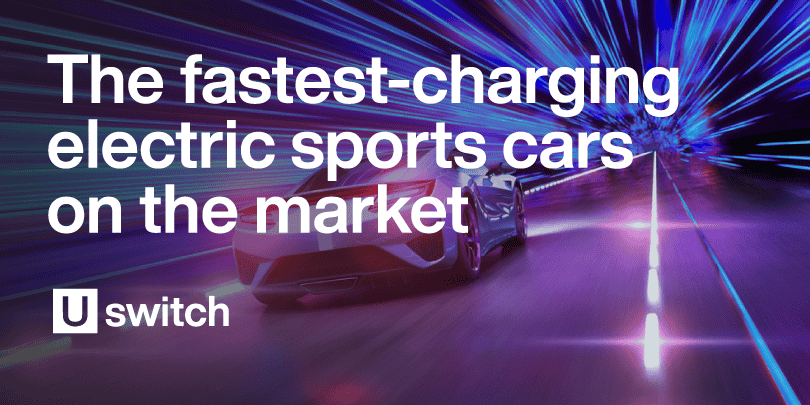 The increasing popularity of electric vehicles (EVs) can also be seen in the sports car market. While the lavish designs of traditional sports cars have long been viewed as the antithesis of sustainability, the global focus on environmental health combined with the improved performance capabilities of EVs has resulted in high-end brands like Porsche, Tesla, and Mercedes going electric.

While the benefits of EV sports cars are clear, many drivers are still reluctant to switch from their fuel-powered vehicles due to performance-based concerns like speed and capacity of electric charging points. If we are to successfully encourage more sports car drivers to go electric, then electric sports cars must be able to match the speed and performance of their petrol and diesel-powered counterparts. 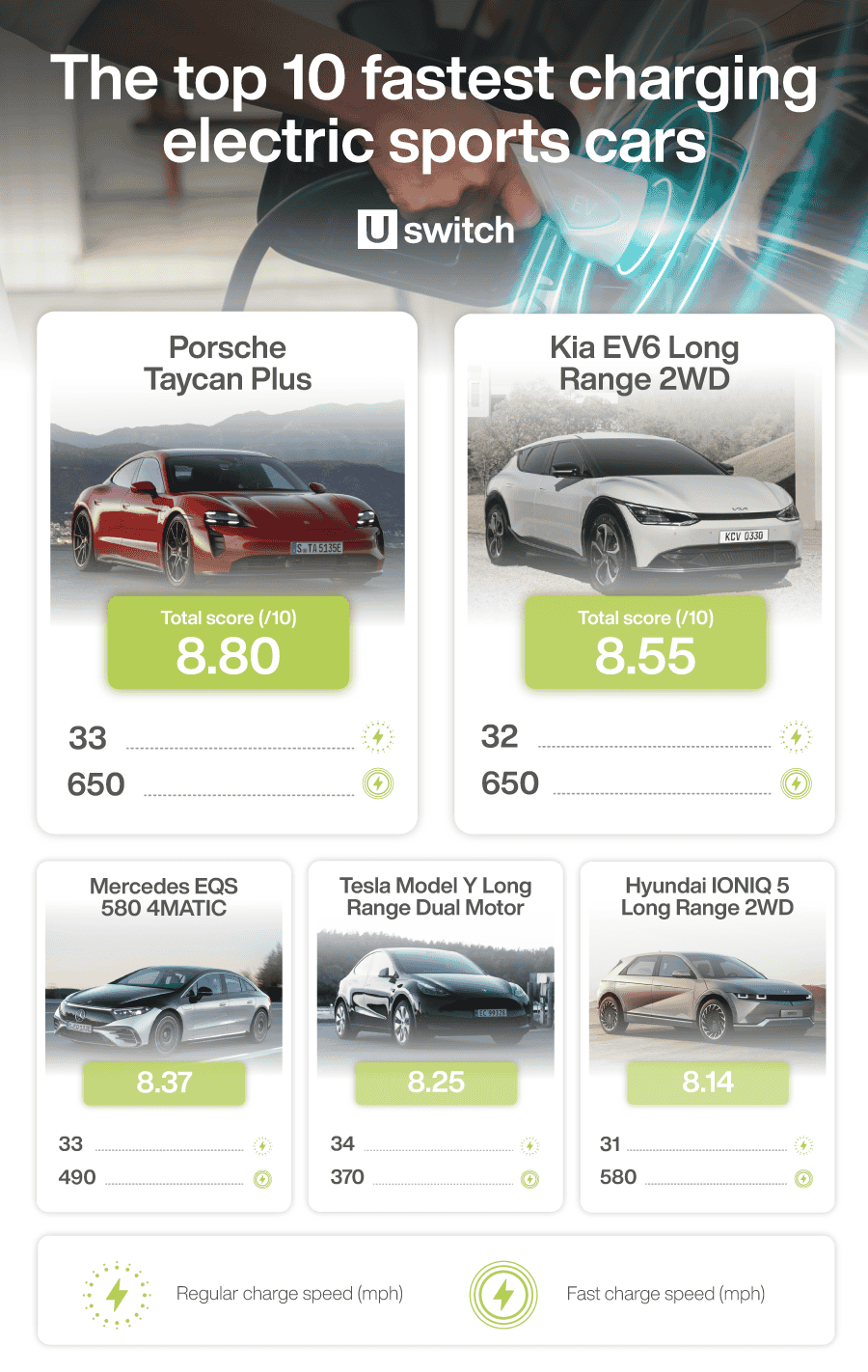 Looking at the two categories of regular charge speed and fast charge speed, we gave each car an average score out of 10 to determine the fastest charging electric sports cars.

From the Boxster to the Carerra, German car manufacturer Porsche has long been associated with some of the world’s most famous sports cars. With an overall score of 8.8, the Porsche Taycan Plus was found to be the fastest charging electric sports car on our list. The Taycan Plus performed strongly in both categories, with its fast charge speed score of 650mph the joint highest on our list.

South Korean manufacturer Kia was responsible for producing the second-fastest charging sports car in our study. With a regular charge speed of 32mph combined with an exceptional fast charge speed score of 650mph, the EV6 Long Range 2WD received an overall rating of 8.55.

Mercedes is the second German manufacturer to feature in our top five with their EQS 580 4matic. With a regular charge speed of 33mph and a fast charge speed of 490mph, the EQS finished third with a final score of 8.37.

As a brand often cited as being at the cutting edge of the EV industry, Tesla is responsible for the highest-ranking American car in our study with their Model Y Long Range Dual Motor.  With an impressive regular charge score of 34mph coupled with a fast charge speed of 370mph,  the Model Y achieved an overall score of 8.25.

Rounding off our top five is Hyundai’s IONIQ 5 Long Range 2WD. With an exceptional fast charge speed score of 580mph, the IONIQ 5 was the second-highest South Korean entry on our list, with an overall score of 8.14.

The remainder of our top 10 is made up of cars from Audi, Polestar, BMW, Volkswagen, and Cupra. With an overall rating of 7.92, Audi’s e-tron GT quattro took sixth spot on our list.  The GT quattro was followed by the Polestar 2 Long Range Single Motor in seventh place. With a final score of 7.79, the Swedish sports car was the highest-ranked Scandinavian vehicle in our study.

Concluding our top 10 are Volkswagen’s ID.3 Pro Performance and CUPRA’s Born 150 kW - 58 kWh, which finished joint ninth with scores of 7.16. 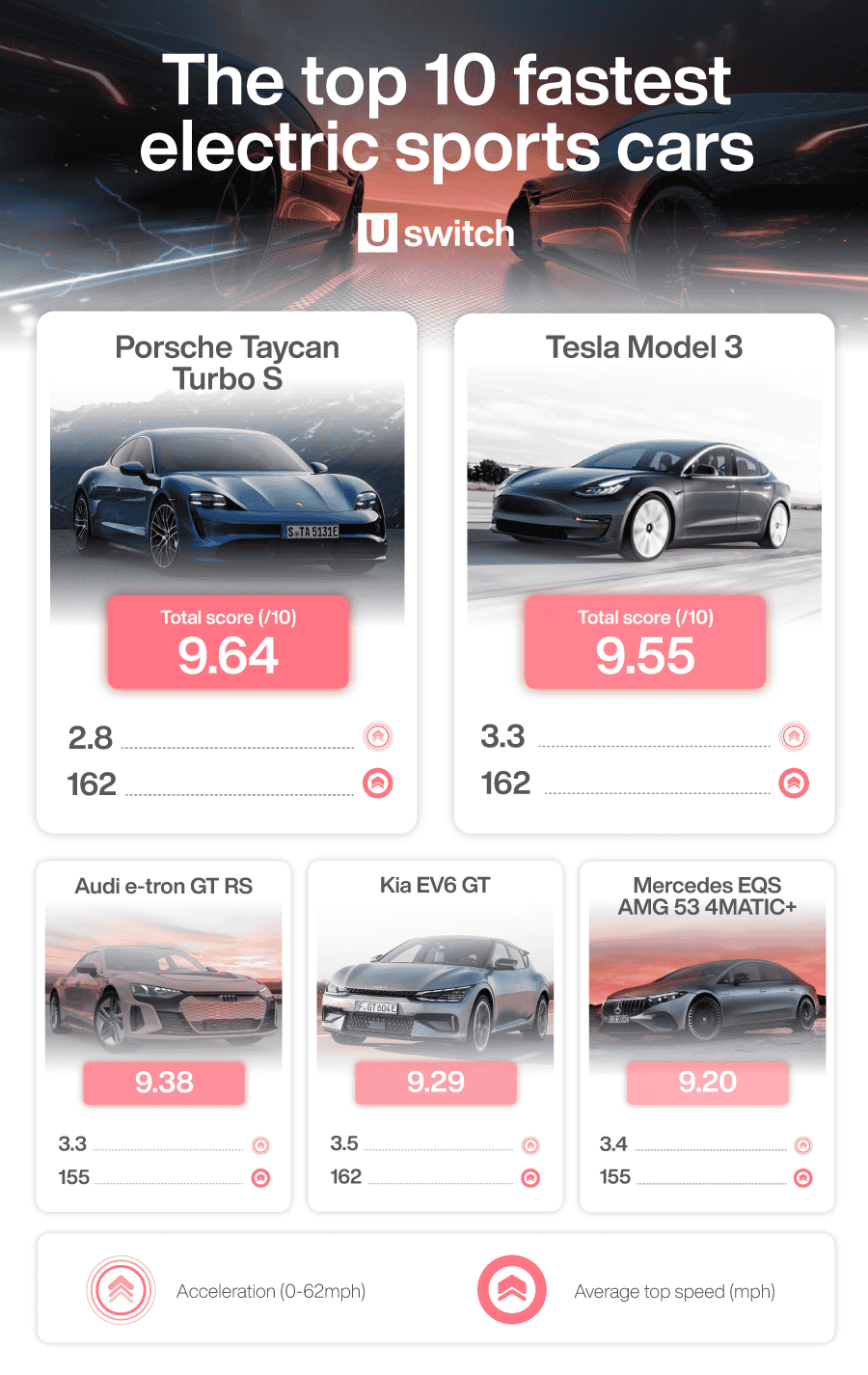 Looking at the categories of acceleration speed (0-62mph) and top speed, we again gave each car in the study an average score out of ten to determine the fastest electric sports cars.

With excellent scores in both categories, Tesla's Model 3 Performance is unfortunate not to finish in first place. While its top speed of 162mph is equal to the Taycan Turbo S, the Model 3 was denied the top spot by a mere half-second of acceleration time.

With a joint-second best score of 3.3 seconds for acceleration, Audi’s e-tron GT RS was found to be the third-fastest electric sports car. With a rapid top speed of 155mph, the German car received an overall score of 9.38.

With a joint-highest score of 162mph for top speed, the Kia EV6 GT finished in fourth place. Despite outperforming the Audi e-tron GT RS for top speed, the East Asian car just missed out on third place thanks to a slightly slower acceleration score of 3.5 seconds.

Mercedes continued the German dominance of our study with their EQS AMG 53 4MATIC+ finishing in fifth place. With impressive scores of 3.4 seconds for acceleration and 155mph for top speed, the EQS received an overall score of 9.2.

The remainder of our top 10 features cars from Polestar, Ford, Tesla, BMW, and Jaguar. With a final rating of 8.66, the Polestar 2 Long Range Dual Motor was the sixth fastest electric sports car in our study.  The Swedish car was followed by two American vehicles, with Ford’s Mustang Mach-E GT and the Tesla Model Y Long Range Dual Motor receiving scores of 8.57 and 8.49, respectively.

The top 10 brands with the fastest electric sports cars 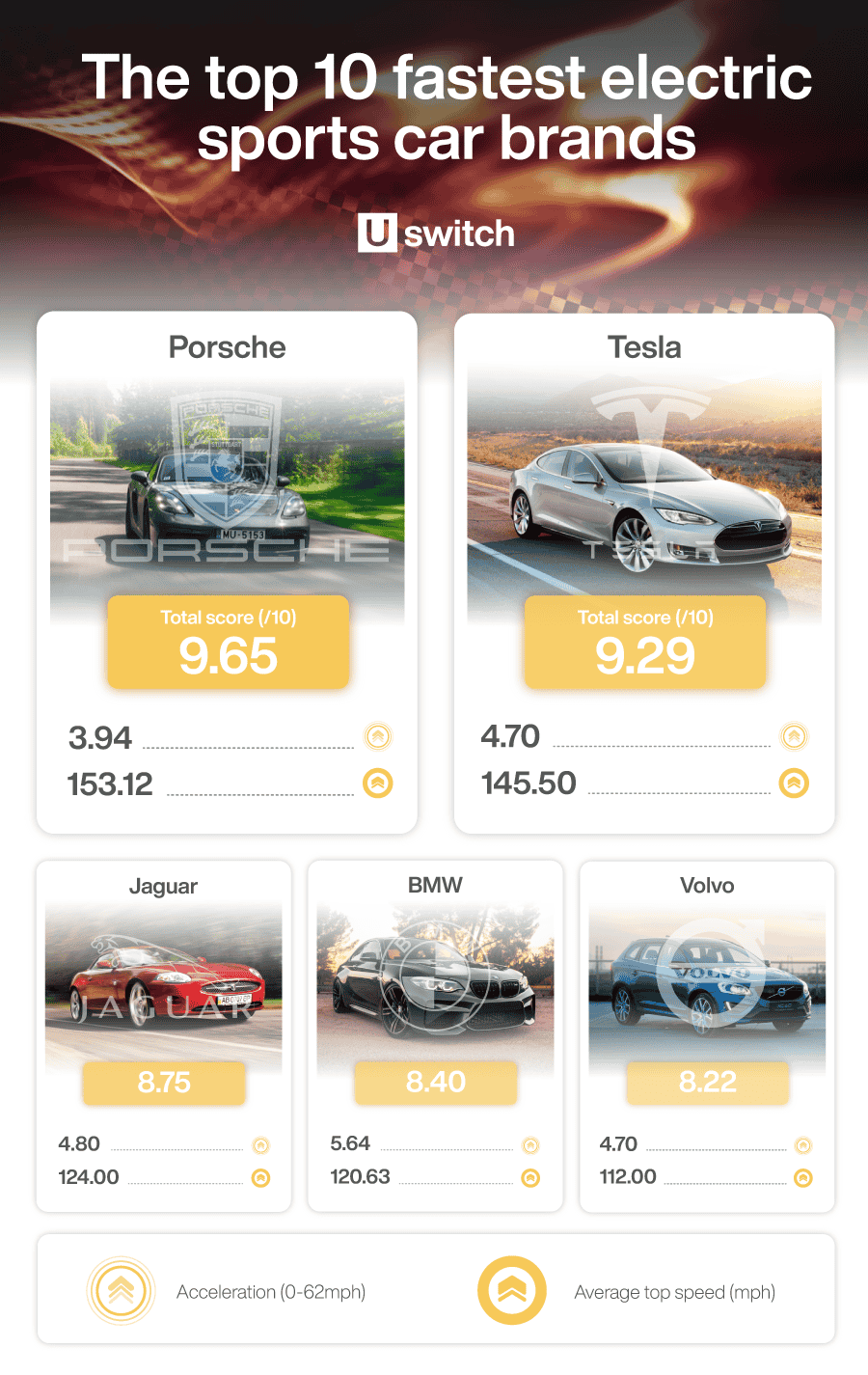 Looking at the combined metrics of each car, we gave every car brand in the study a score out of 10 based on the average acceleration time and the average top speed of their cars.

As the manufacturer responsible for producing the fastest car on our list, it’s unsurprising to find that Porsche was found to be the speediest brand in our study. With an unparalleled average acceleration time of 3.94 seconds combined with a study-best average top speed of 153mph, the German company comfortably topped our list with a score of 9.65.

Tesla took second place with an impressive final rating of 9.29. Despite finishing comfortably behind Porsche in both categories, the American manufacturer had the joint-second best acceleration time on our list (4.7 seconds), as well as the second-highest average top speed (146mph).

With an average acceleration time of 4.8 seconds, Jaguar was found to be the third fastest electric sports car brand. Despite recording an impressive average rating of 8.75, Jaguar’s average top speed of 124mph lags some distance behind those of Porsche and Tesla.

With an average top speed of 121mph, BMW sits comfortably in our top five. Although the average acceleration time of 5.64 seconds is the lowest in our top five, the German brand achieved an impressive overall rating of 8.4.

Despite having no cars featuring in our top ten fastest, Volvo was nevertheless found to have the fifth-highest average speeds in our study. With a joint-second highest average acceleration time of 4.7 seconds and an average top speed of 112mph, the American manufacturer received a final score of 8.22.

The remainder of our top ten is comprised of Audi, Ford, Kia, Polestar, and Mercedes. With an average top speed of 119mph, Audi finished sixth with a score of 7.86. Audi was followed by Ford, who came seventh with a rating of 7.68.

With an average acceleration of 7.26 seconds, Kia took the eighth spot on our list. Rounding off our top 10 are Polestar and Mercedes, who received scores of 6.61 and 6.25, respectively.

How can I maximise the driving range of my EV?

With charging stations on the rise across Europe, owning an EV has never been more convenient. Even so, many drivers still hold concerns about the mileage and longevity of their car when embarking on a long journey.

This is even more true for those driving electric sports cars, where higher speeds and power can result in quicker battery drainage. Despite this, there are a few steps you can take to ensure you get ample mileage out of your EV.

“Electric sports cars are becoming more advanced than ever. While previously it would’ve been difficult to replicate the speeds of a normal sports car without sacrificing some driving range, there is now an array of high-calibre EV sports cars available that can hold their charge over longer distances.

For those who still have concerns about the charge of their car, there are a few steps you can take to help you maximise your range. Going easy on the heating and the air conditioning in your vehicle is a great way to save battery life. By only using these facilities as and when required, you preserve more electricity that can be used to clock up the miles.

Although charging stations are on the rise, investing in a home charging point for an electric car is perfect for people looking to be more self-sufficient with their EV charging. Charging your car at home makes you less reliant on the facilities of your location, meaning you can maximise your mileage wherever you’re going.

With so much quality EV charging equipment now available, maximising your driving range has never been easier.”

The cost of charging your EV can vary significantly depending on both your location and the type of charger at the station. Thankfully, even in more expensive areas, the cost of electrical charging tends to be significantly less than what you’d pay to power a traditional petrol or diesel-based vehicle.

There has never been a better time to own an EV. As well as charging stations being on the rise, you can also now invest in a home EV charging station to gain more control over your car’s charge than ever before.

Buying a home EV charging station is a convenient and economical way to maintain the charge of your car. By being able to charge your EV at home, you can make sure your car is fully equipped to deal with your journey before you hit the road.